write about things that happen to other people

I like the rapport of these two. Whether it’s Meg Ryan (Sally) and Billy Crystal (Harry) playing off one another or the writing/characters playing off one another, they’ve got a nice back-and-forth almost immediately. Even when she’s only telling him things as if he has dared her, when all he did was remain silent—Harry’s “Fine, don’t tell me” is a great way of getting her to talk; Sally is just dying to tell someone everything about herself. And, Harry has a tendency to do just that about himself. They should both be bloggers, really, tell the world about themselves all the time, but veil it in some gimmick, like watching a movie everyday...

I’ve said too much.

My point is, I like how these two interact. I’ve got some people I can go back-and-forth with like that, at least some of the time, my kids, my ex, a couple of my sisters, maybe a couple of my friends. Particularly, I’d like to imagine that I am both as offputting and charming as Harry is. Like Phil Connors in Groundhog Day, pre-loop Phil at least, Harry is just charming enough that you want to be near him but just annoying enough you wish you’d thought better of it in the first place. James (1989) says, “Harry seems carefree, but is pessimistic enough to read the last page of a book first; in case he dies, he says, at least he’ll know how it ends.” I’m pessimistic, but I don’t do that. I like stories too much, and I consider myself a writer still, even if I don’t write fiction much anymore

(I want to, I’m just busy with writing for school or for this blog—or maybe that’s just an excuse because I ran out of the energy to keep on writing fiction when it seemed to be going nowhere. That’s the same attitude I take toward relationships, actually. Better to keep myself busy, keep writing my blog every day and get into tabletop gaming over the summer, spend time with my kids, and I don’t have to worry about finding someone new to... date. As Jess says in When Harry Met Sally, “You know I’ve finally gone to a new place in my life where I’m comfortable with the fact that it’s just me and my work.”

I never really dated. Met three girlfriends (the last one of which I married) online. These days, I really am not sure if I’ve got time for dating, or even a good high maintenance friend like Sally. Plus, you know, emotionally, maybe I’m secretly—as in, I’m keeping it from myself—not ready to bother with someone new yet... but I was talking about When Harry Met Sally.)

I also generally do my best to avoid spoilers online for the latest film or what have you. I prefer to get the story as it is. 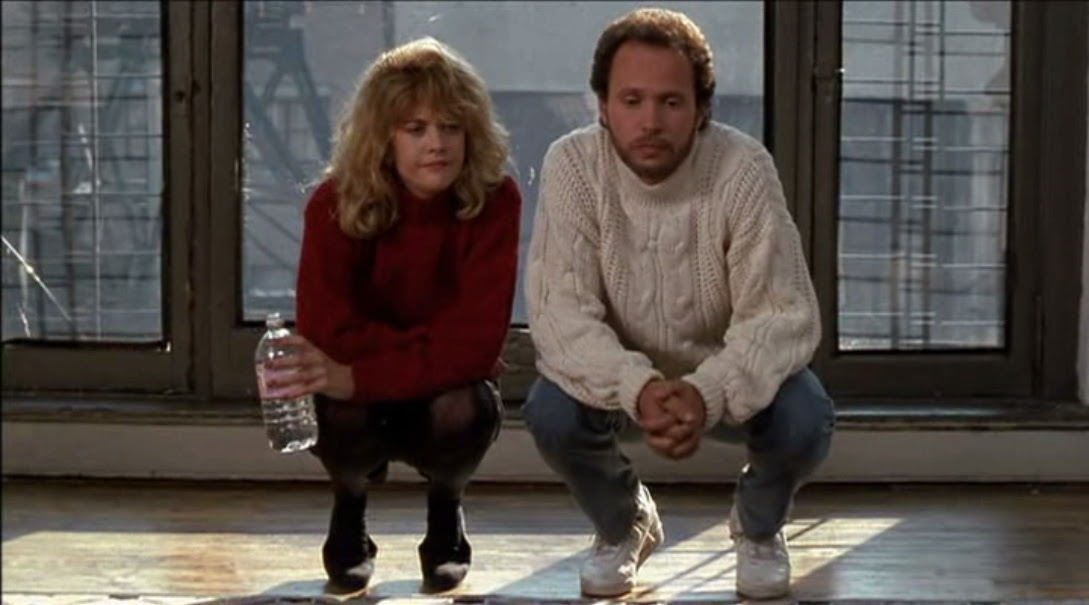 Reality is not as inevitable as the story, though, unfortunately. Of course Harry and Sally will end up together

(And, how weird is it that we use that term—end up with? We not only assume something ongoing, something long-term, but we insist on it being “forever” (i.e. until death do us part and all that). This relationship is going to last until we die. On the one hand, that is an amazingly romantic way to think about things. On the other hand, that is a horrible, horrible way to think about anything. Nothing lasts forever. But, am I cynical because my marriage is a thing of the past or because I should have been cynical all along?

Speaking of cynical, I like this line from Roger Ebert’s review of the movie:

The movie apparently believes that—and it also suggests that the best way to get rid of sex as an issue is to get married, since married people always seem too tired for sex.

Like jelly beans or pennies into the jar as newlyweds. After a while, it wears off. Everything does, unless you make an effort.)

because none of the other love interests have any depth, if they even have any lines—I think both Joe and Helen have one, maybe two lines. In fact, the only other actual characters in the movie—Jess (Bruno Kirby) and Marie (Carrie Fisher)—serve only as sounding boards for Harry and Sally (respectively) until they (Jess and Marie) meet and immediately hit it off with each other. James (1989) calls the movie an “often funny but amazingly hollow film” probably because of this very problem. In reality we have people on all sides, most of them just barely acquaintances, but in the movies, if a character gets a name or lines, he or she is probably going to matter, but the rest of them—they are just fodder for the plot and the jokes.

If only it were that easy...

Except emotionally, it kinda feels that way, doesn’t it? When you “fall in love” it is a bit like all the other people in your life are just extras who barely matter. Their opinions, if bad, don’t matter. Their opinions, if good, serve as fuel for the relationship. It’s a bit disturbing, actually, how readily we forget the world to be together... which reminds me of Snow Patrol lyrics.