i refuse to spend the next three days fighting with you

Pretty Woman begins with a magic trick. And, not long after, there’s an amusing bit on the street—tourists taking pictures of a dead body. There is more here than lazy romance.

And the movie does paint a picture of a city (or cities, rather) divided on class/money lines... as I’ve already said, but with a more negative tone, the picture presents us a world that creates people like Edward and Vivian.

(Sidenote: There are a lot of horses in Edward’s penthouse, statutes, paintings. Combine those with the polo match (not a part of the original script), not to mention Vivian’s dream about a being saved by a knight on horseback, and the running motif seems like it might mean something. But, the most obvious meaning—linking horses to the whole class thing—doesn’t really add anything new to the film.)

Both Richard Gere and Julia Roberts are charming here. Hector Elizondo does a great job with very little material, and handful of lines but mostly just a few looks—disapproving at first, then approving bordering on proud... the film has been compared not just to Cinderella but also Pygmalion (or My Fair Lady). Elizondo’s Mr. Thompson would be the more hands on side of a divided Professor Higgins (the other half, obviously, Gere’s Edward). 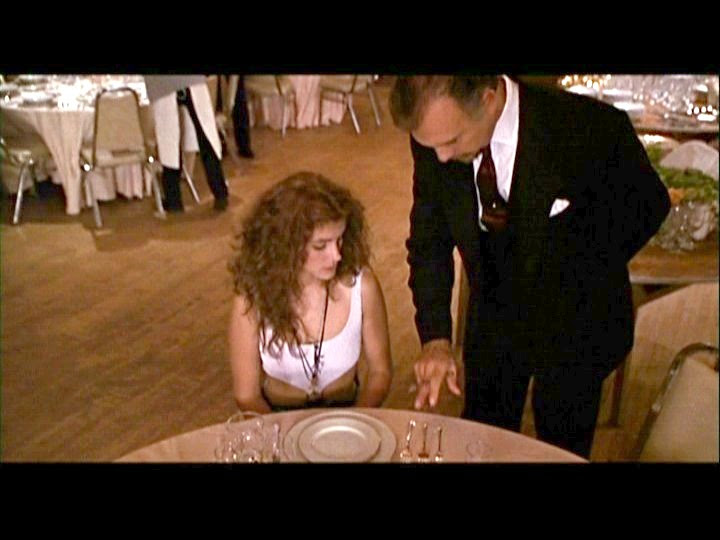 Ralph Bellamy’s Morse is supposed to evoke an old-fashioned, down-home sort of charm, but comes off a bit simplistically, more of a fool than a businessman. But, some small parts work quite well. Patrick Richwood as the elevator guy, Dennis, Larry Miller as a store manager and Elinor Donihue as the helpful saleswoman Bridget all do quite well with little to no lines of dialogue.

Laura San Giacomo’s Kit is pretty funny, as well, like when she explains her turf in terms of which stars’ stars are on the ground, then rather childishly whines, when the other hooker calls her a grouch. But, the portrayal of Kit coupled with Vivian’s naiveté paints a disturbing picture of prostitutes as innocents. We barely see any darker side of the oldest profession (or of Edward’s profession for that matter). Vivian might as well have just been any girl half Edward’s age that he happened upon on the street.

This movie is quite watchable, but I really don’t think it’s very good. Knowing that it did quite well back when it came out I was surprised to see that it only has a 6.9 on IMDb; I thought this movie was still a well-loved staple of romantic comedies. I think this film, regardless of what people think of it today, is a vital piece in understanding the romantic comedy genre. There’s a sense about the film that if you just stick a pair of beautiful people together, of course they must be in love by the end of the film, and the audience will cheer.

It’s not my genre. This film is a good example of why. It glosses over serious issues with class and money and love and romance and paints a simple picture. Love isn’t simple. Class divides are not simple. Money is not simple. You don’t casually become a prostitute after the guy you followed to Hollywood dumps you and then get a happy ending with a corporate raider from out of town.

Maybe that’s why the movie works so well despite fundamental flaws; it barely has anything negative to work with. It’s almost all happy and cheerful. It’s a dream come true for Vivian, a dream he didn’t even know he had come true for Edward, and a dream that many an audience member can vicariously enjoy as well.

Plus, ultimately, however unrealistic the love and romance may be, the film puts those things above the money and the business. And, that plays nicely.

The biggest failure in the film is something that most of the audience simply won’t care about. Dowd and Pallotta (2000) list a couple basic ingredients to the classic romance—”the risk of social ostracism [and] the presence of a serious obstacle... that lies in the path of the developing relationship” (p. 552). In Pretty Woman, there is really no “serious obstacle” in the way of Edward and Vivian. Dowd and Pallotta suggest that as the years go on, romantic comedies have to “fill the gap produced by the disappearance of the significant romantic impediment” and they do so by inventing “ingenious and funny circumstances that keep the lovers apart without violating social taboos” (p. 563). Romantic comedies manufacture reasons for two lovers to separate. They manipulate the details, and the audience, to make the final embrace all the more ecstatic. Sure, there is social taboo separating Edward and Vivian, except Edward doesn’t see it, Vivian doesn’t see it, and the movie does its best right from the start in ignoring it.