a wild flower sprung from the hard clay

(Before I get into today's film--Duel in the Sun--I wanted to note that while the remake of Stagecoach was not nearly as good as the original, it did have a few elements that I rather liked. While the guy playing Ringo did not have the personality of John Wayne, his relationship with Dallas was more believable in the remake because they actually had more conversations. And, speaking of Dallas, the remake version has a lot more personality to her, and she and this Mrs. Mallory have far more interesting interactions in the remake than in the original.

The remake's reliance on more violence seems unnecessary, but as we will see when we catch up to that era in Western films (the remake came out in 1966), violence was de rigueur at the time. But, turning Ringo's fight with the Plumbers into a more elaborate thing in the remake makes Ringo less special--no longer can he win a gunfight with exactly the minimum number of bullets he needs; instead, he barely wins and ends up doing major damage to the local tavern in the process.

The remake really just doesn't do subtlety at all. The drunk doctor is a lot more tipsy when he's drunk and a lot more stable when he sobers up, for example. And, the last bit in the movie--in the original, Curly and Doc coyly step aside so Ringo and Dallas can steal away--in the remake is not cute at all. Curly just tells Ringo and Dallas to "Get out of here.")

Now, Duel in the Sun. We've jumped ahead a few years from the original Stagecoach. We've achieved Technicolor.

Actually, as we are introduced to Scott Chavez, apparently a gambler, I'm assuming (and partly remembering from all the of the Westerns I saw as a kid growing up), there are some clear archetypes already in place in the Westerns; I'm reminded of my Time-Life Wild West books, with different volumes for gamblers and gunfighters and outlaws and trailblazers... I just had to doublecheck that I've still got those books. I thought I might have gotten rid of them a couple moves ago to save space. But, I've still got them. Might have to look through them this month, deal a bit in the reality of the West as well as all of this cinematic presentation thereof. Wright (1975) argues, "The fictional interaction of different kinds of men often makes details of motivation unnecessary and intensifies the force of their situational antagonisms" (p. 6). He's talking about specific conflicts, like between farmers and townsfolk, but really, a great deal of classic Western characters are readily identifiable by their occupations or social roles. Wright lists, "farmers, cowboys, cavalrymen, miners, Indian fighters, gamblers, gunfighters, and railroad builders" (p. 5). He leaves out the lawman--be he the local sheriff or a ranger or a Pinkerton, a lawyer, a judge, here a Senator--who, for example, serves as a representative of order more often than not. But, in the "wild" West, order is not always particularly welcome. Law from back east, for example, might be an intrusion.

(A half hour into this Western, I'm surprised how much of it is taking place inside this one house.)

I can't tell if we were supposed to be bothered by Lewt McCanles (Gregory Peck) coming into Pearl's (Jennifer Jones) room and forcing a kiss. Maybe that's just "manly" in 1946. We just got out of World War II; women are working outside the home more. If I wanted to read into the timing of this film, I could take Lewt's advances as some reclaiming of masculinity after the war, or Pearl's refusal of him as some reifying of women's independence. Trapping her in the water, grabbing her off her horse when they get back home--Lewt is not nice. It occurs to me, I expected Peck's characters to be the hero here--I don't know if I ever saw this particular Western before, but I certainly have no memory of it--but really it is Pearl. I didn't figure on gender becoming a big part of the Western for another decade or two, but here we've already got a female lead and a preoccupation with sex (though not explicitly).

(Before he was executed at the beginning of the film, Pearl's father had an interesting thing to say about married names; he says: "I long since killed a person much superior to either of them [the man he just killed or his current self]--myself. I killed that person the day I gave my family's name to the woman who became my wife." It's a strange (but understandable) notion, that a) his pre-married self was a different person and b) he was a better person. Chavez is sending Pearl to live with his second cousin to learn to be a good woman, but he's also apparently denegrating the idea of marriage.)

Laura Belle McCanlesasks warily if Pearl went "riding" with Lewt, as if the implication of something untoward is clear, as if he's got a history. When she learns that Pearl went swimming, and Lewt was there, Laura Belle is fairly horrified and she soon has a preacher over to steer Pearl away from temptation. Lewt is the one trying to give in to temptation here, but Pearl is the one to whom the preacher talks. An old double standard.

Meanwhile, Senator Jackson McCanles, despite being unable to walk, heads out with a bunch of other men on horseback to stop some oncoming train tracks. But, McCanles refuses to fire on the cavalry there to protect the railroad men; "I once fought for that flag," he says, "I'll not fire on it."

Another meanwhile, the black maid Vashti knows a bit about everyone's business but nearly every time she tries to recount conversations, people cut her off. Plus, I think I've neglected to note that Pearl is half Indian--the Senator called her a "half breed." There is some comment on gender, on race and being American going on here. This is the mythmaking that Wright writes about in his book. The tropes of the genre, like the fantasy themes of Ernest Bormann, serve to establish and re-establish roles outside the film by presenting certain ideals inside the film. Except, so far the film is not making much effort to suggest that Lewt's behavior is wrong or that his brother Jesse is good.

In fact, when Lewt pulls the mane of and bites the ear of the horse he's trying to break, Pearl cheers him on, when the film has basically shown us that Lewt forced himself on her. This is 1946 so we don't see any rape, but it the imagery is obvious. (Turns out, the film had too be heavily edited to get past the Hays Code, but the only specific scene I can find reference to being removed was a seductive dance.) Afterward, she makes advances toward Lewt until she learns he will not marry her--plus, like his father, he calls her a "half breed." She moves on to Sam Pierce, who tells her "I'm old enough to be your father." But, there's discussion of the two of them marrying... and CUT TO

Jesse and his fiancé Helen, whose father is the the one building the new railroad. It's an intriguing segue because there was conflict earlier over this railroad, something that is linking the West to parts east, but also forcing its way through land where it wasn't wanted. That conflict earlier ended with McCanles backing down--because America. There seems to be some potential metaphor here between the railroad and... Lewt? Pearl?

Lewt kills Pierce because of his claim on Pearl.

And then he derails a train... for fun? I think writer/producer Selznick might have been having some issues with his amphetamine addiction or his adulterous affair with star Jennifer Jones and got confused on exactly where the film was going.

Or maybe this is all exactly what he was going for. Wright includes Duel in the Sun in his section on what he calls "the classical plot." One important theme here, then, is the opposition separating the hero and the villain. Function #8 of this classical plot is, "There is a strong friendship or respect between the hero and a villain." Pearl just had Lewt around again, even though he killed Pierce and is a wanted man. She literally threw herself at his feet when he turned to leave. This seems to draw attention the the opposition here. Wright tells us this is "the opposition between those who are outside society and those who are inside society" (p. 49). Pearl was outside society because of her status as a half breed, but she knelt as she was supposed to when the preacher was around. Lewt was definitely inside society before but then Pearl rejected him and he committed murder; he is no longer inside society. The two of them have effectively switched places. Especially, with Jesse gone away, Pearl is the only child left in the McCanles household. Wright continues: "This inside/outside contrast is fairly rigorous in its typing of the hero and the society, but it is rather relaxed in its treatment of the villains, who are, as we shall see, sometimes inside and sometimes outside" (ibid). Lewt was inside even when his behavior with Pearl was outside. Now, he's entirely outside. He even shot his own unarmed brother. 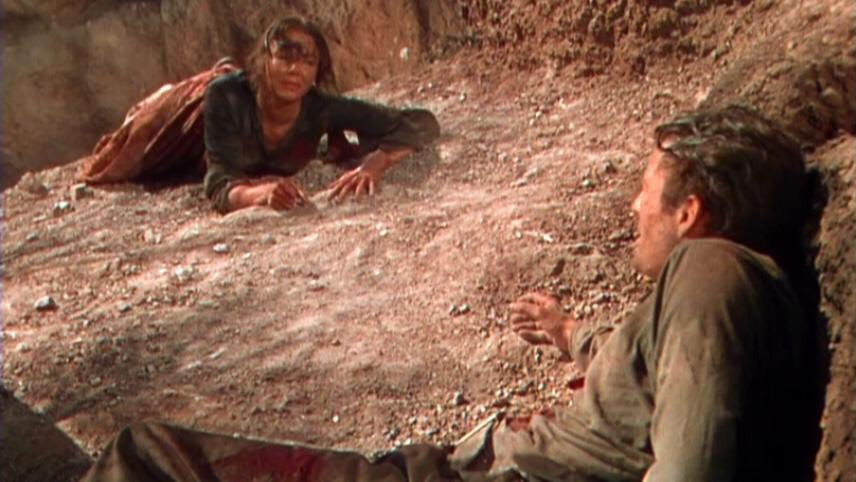 So, coming down to the end of the film, there is an interesting moment. Pearl, clearly more accustomed to the heat, gets down on the ground and drinks water alongside her horse. Her native blood is evoked by the musical score as well as she heads to kill Lewt. And they shoot each other, then kiss and all is... well it's not all right with the world. But, it's something.

The narration at the beginning of the film suggested that Pearl disappeared, but the ending implies she's just as mortally wounded as Lewt is. Going back to this film's commentary on gender--and what Pearl's father said about marriage, what Laura Bell said about never finding happiness, the ultimate message of this film is that men and women shouldn't be together, I suppose. It will just end with blood and tears, and maybe some kissing.