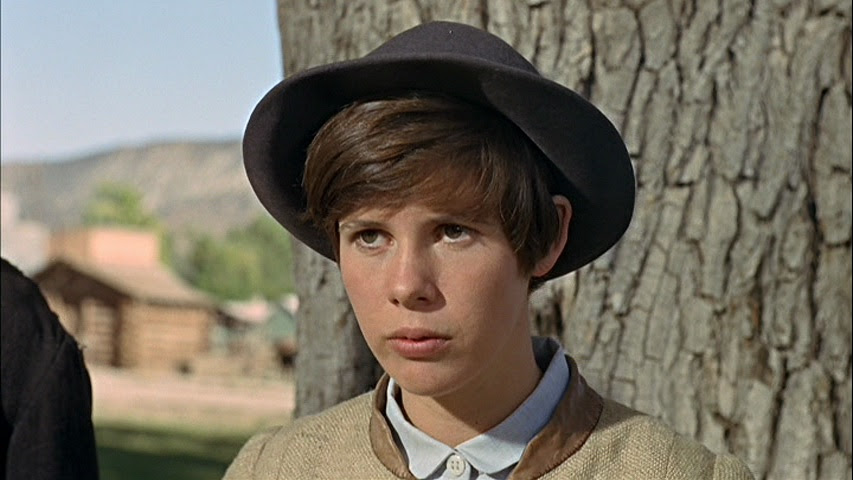 We're introduced to Mattie (Kim Darby) in the original True Grit--I will also be watching the remake later--through a window. She's inside at a desk and she seems to know as much as or more than her father about the business of their ranch. She also has a short haircut that doesn't immediately suggest femininity, at least within the setting. But, True Grit brings up an interesting thing about the setting, about the genre. In an interview with The Guardian regarding the Coen Brothers' remake, Joel Coen compares the film to Alice in Wonderland...

In our minds, we never got real close to thinking about it in terms of the western. We weren't thinking: let's shoot it in widescreen like Sergio Leone.

If anything... we were thinking about it more in terms of Alice in Wonderland. She goes across the river into a place where she sees all these weird things, weird landscapes... and then it becomes weirder and weirder, pushing it more towards a fairytale thing, or Night of the Hunter, in the sense of a landscape becoming more self-consciously poetic. That's about as far from Ford as you can get.

I must immediately take issue with that last statement. I think Ford's tendency toward Monument Valley suggests that he wanted little else from the landscape but for it to be self-consciously poetic. Of course, Ford starts there. The setting is just the setting.

(Just after Mattie mentions that her father used his pistol in the war, she and Rooster (John Wayne) walk past a cannon and pyramid of cannonballs on display. There is the usual hint of the remnants of the Civil War here, but also, perhaps a little more distancing. This isn't a cannon recently used but an old cannon turned into a monument.)

Cut away the title sequence from this film--showing off the landscape around the ranch, and this film does seem closer to this Wonderland comparison. Mattie's arrival in town might as well be the opening of the story (as it kinda of is in the remake), as much as previous information is reiterated repeatedly. So, the trajectory does go from the town into the (relatively) unknown wilderness.

(The bit with the rat encapsulates a lot of the rest of the setup for this plot. Rooster shoots it and Mattie throws it outside, tells the cat--previously identified as Rooster's "nephew" General Sterling Price--"that was your job in the first place" when the cat runs outside to eat the rat. The cat--and its feline laziness--suggests an allusion to the local law who can do nothing about Tom Chaney. The rat can only be dealt with through Rooster's abrupt force.)

Except, the wilderness isn't really unknown to Mattie. She doesn't reside in town, even claims to having gone on a coon hunt last summer with her father that involve bedding down in the wild. Arguably, she's in better hands on this venture than on that one. Alice could have used as good a company on her adventure. 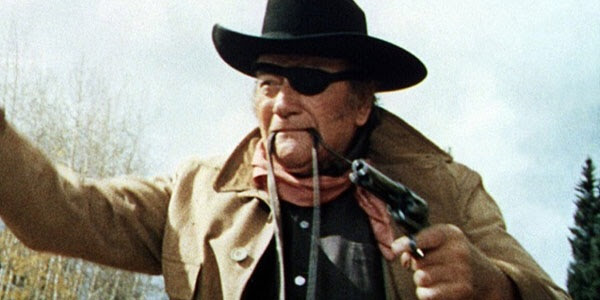 Wright (1975) takes the solidarity--or at least the process of getting to solidarity--of the group as central to his professional plot, of which True Grit is one of his chief examples. Mattie and Rooster and LaBoeuf start out disliking one another and gradually learn to respect each other. The same setup is common to many a film outside the Western. Just out of the movies I've watched for this blog, you've got the likes of Planes, Trains & Automobiles, Dutch, Lethal Weapon, or most any romantic comedy.

(Bonnie and Clyde, released just a couple years before True Grit, gets into one of Wright's details about the the professional plot; unlike in the vengeance plot, the hero does not leave society alone.

He is joined by a woman who fights with him and shares his values and individuality. The hero and the heroine are a pair who are outside of society by choice, but who can represent at least some of the social values from the classical plot. Now it seems that love and family--and also perhaps tolerance and respect--are not aspects of society but only truly exist between strong individuals who must separate themselves from the narrow-minded cowardice of the group. (p. 165)

Heroism does not come singularly anymore... not to imply that Bonnie Parker or Clyde Barrow are heroes, but Penn's film certainly frames their plot as if they are.)

It's a basic human story, really--no matter how much you may dislike someone, the more time you spend with him or her, the more you will understand. Hell, that brings us back to Groundhog Day, really. Spend enough time in Punxsutawney--even if not by choice--and you'll come to appreciate (if not like) the locals. Even separate from the main trio here getting to appreciate one another, the fact that Rooster knows most of the bad men they're going after suggests that he spends most of his time out hunting bad men, and not so much of his time in town with the good folks. In fact, not one of these three seems that attached to anyone else; though Mattie is intent on revenge, she is never emotional about her father's death. As Wright describes it,

Cogburn and LaBoeuf... have no attachments to society. When in town, Cogburn lives in a drunken stupor in the back of a Chinese laundry with a lazy cat, in a room that he keeps like a pigsty, according to Mattie. LaBoeuf claims he has a girlfriend but no one comes to his funeral. Mattie has a home and a family, but at fourteen she is so independent that she can out-trade a horse trader and face down a stubborn old reprobate. (p. 111)

The remake offers up a just-as-stubborn but not as... annoying version of Mattie. All three characters in the original had to not only grow on one another but on the audience. Here, it's a little easier to accept Mattie.

Jeff Bridges' version of Rooster Cogburn sounds a bit like Karl Childers in Sling Blade; I almost expect him to order some taters with mustard. And, a lot of the "conversation" with Mattie, especially when he's talking about his wife and son, comes across more like drunken rambling in this version than actual conversation.

Removing LeBoeuf in the middle of the film serves to play up the connection between Rooster and Mattie but if he's so useless, or the Coen brothers think he is, why not just write him out of the film altogether? (And, he gets to live?)

Then, offhandedly he's the one who points out the pit to Mattie. It seems to me like the point to her falling in the hole is a microcosm of the whole situation--she knows that she is in a dangerous position but her need for revenge, even as emotionless as it seems in both film versions, overtakes what she knows of her immediate surroundings. It isn't simply an accident, it's neglecting danger because of the need for revenge.

One last note on the remake--the pleasant music and slow pace to Rooster riding with Mattie at the end of the film seems weird. The sense of urgency is lost.