everybody in this country kill crazy?

(Yesterday's entry was quite short, missing a whole middle and barely having an introduction or conclusion. The basic explanation is a) I had no idea how mentally exhausted I was as the spring quarter came to an end yesterday evening and b) add to that a night out with some fellow grad students, some drinks and a 2+ hour movie to watch at about half past midnight. I managed, but only barely. The copy of The Magnificent Seven that I've got turned out to be a rather bad copy, with a stretched image and messed up sound, so put all that together and while I've seen the film before, probably seen the sequels, and watched the tv series back in 1998, not to mention having seen The Seven Samurai--I know what the film is about but I was not following it too well last night. It was all I could do to stay awake.

The good news: spring quarter ended--even turned in today the grades for the classes I was teaching, and that means I have completed all of my coursework for grad school. I've still got to finish up and defend my thesis, but I've got the summer break to work on that. In the meantime, the blog continues...)

As for today's film--The Man Who Shot Liberty Valance--I was listening to Gene Pitney's song "(The Man Who Shot) Liberty Valance" before I pushed play on the film and, I don't know (or don't remember--I'm sure I've seen this movie before) how much the film is going to support the idea in the lyrics that, "When the final showdown came at last, a law book was no good."

(The hold up of the stagecoach that begins the flashback reminds me of the robbery in 3:10 to Yuma--a little more violent than the original there, but not as frenetic as the remake. It's also interesting that we see the old, broken down stagecoach covered in dust before the flashback begins. It's like John Ford was deliberately invoking his earlier work,)

I wrote a paper this past quarter on the sixties radical group Weatherman (AKA The Weather Underground). One through-line of the paper--though not my primary argument, necessarily--was that violence is a somewhat inevitable part of American society. The last few lines follow:

America believes in violence or it would not have a history full of war. As H. Rap Brown once said, violence "is as American as cherry pie." That America's citizens also believe in violence is entirely understandable and should be expected.

It's interesting watching these Westerns, now getting into the 1960s, and seeing each one come down to a violent standoff. As much as Gannon wanted to avoid violence in Warlock, as much as the titular seven last night set out to prepare the townsfolk to fight off Calvera's men in an organized fashion, it might as well be the Earp brothers instigating a fight making its presumed inevitability into a reality instead. I find myself thinking about the sixties, the counterculture, the civil rights movement, the antiwar movement, how organization turned toward violence when results were not forthcoming; it's the American way--if it ain't working now, just throw more force into it. And, history tells us the folks who turned the back half of the 1960s into a place of violence were an aberration. These folks had grown up with movies like all of these Westerns, had grown up on stories about World War II--the "Good War"--and Korea, and we act surprised when they think violence is a way to get what you want?

Beyond Wright's (1975) binary oppositions, there is a sense that these "Cowboy" gangs are like forces of chaos, the bad stuff within humanity (and without) that we have to fight to maintain civilization. It's a simplistic notion... not entirely inaccurate, but simplistic; that we must fight off some inherent evil within us to produce civilization. It also promotes the idea that the civilization that we have is a good, something we have fought for and will fight for, the reason we do what we do. When its flaws are made known, what are we supposed to do? Welcome the critique and admit this great thing we've put so much time and effort into is wrong? No, we smash the opposition, shut down its voice and prove it wrong because might makes right and we're the good guys, God damn it.

Ranse (Jimmy Stewart) is a strange hero, actually. Like Johnny Gannon in Warlock, he wants the violence to end. It's the idea we express in this country, but not something we often support. Tom (John Wayne) calls him "pilgrim," a name that suggests at the same time a) a historical reference to the founding of America, tying Ranse to the soul of the nation (and just now the musical score referenced the last lines of "The Star-Spangled Banner" as Tom went off into the night), and b) the notion that Ranse is like a foreigner who just doesn't understand the way locals do things. Other characters, including Liberty Valance (Lee Marvin), call him "dude" which at the time would have been something like a dandy, out of place in the frontier. Ranse refuses to carry a gun, and he would rather arrest than fight Valance...

And, that name circles us back around to America all over again. And this as Ranse's class is learning about the United States, and Pompey (Woody Strode) conflates the Declaration of Independence and the Constitution. Pompey, of course is a black man named for a Roman consul (and a Roman consul namechecked in the Federalist Papers, no less). Ranse mentions the right to vote and have a voice and Pompey doesn't have that. Black men wouldn't really have that until a couple more years after this film came out. 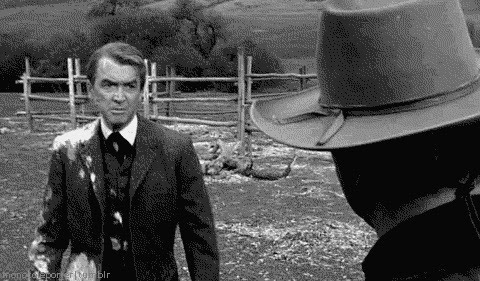 It had to doublecheck online to see that the territory heading for statehood here goes unnamed and the date is never clear. We're definitely after the Civil War and less than 25 years away from the telephone--the reporter used one in the framing story. But, the nonspecificity seems to be the point. This story works as a sort of metaphor for the formation of a state out of something less... civilized. Ranse is short for Ransom, which suggests a payment, something that need be traded for, well, I guess it's society itself. And the beast that must be paid is Liberty Valance. I find that last name almost more interesting than the first. Sure, Liberty as our villain intrigues but Valance sounds a bit of Valiance, which imagine a hero named Liberty Valiance--that would be amazing, and a little... much. Valance, more literally, refers to a decoration over a window, and there is a cynical idea there in the villain's name then, like "Liberty" is just a decoration that America hangs over itself to pretend to something great when it's really just a vote away from chaos and destruction and everything falling apart. That Valance tends to whip men rather than shoot them is just another detail that seems quite American to me, like a slavemaster or maybe something even more primal than anything American, a demon deep down within us all that would rather leave a mark and cause some pain than have a guy die quickly with a bullet in him (not that, in reality, bullets necessarily kill quickly). It also sets Valance apart from Doniphon. Doniphon is a gunfighter but Valance is not. He can shoot, sure, but his go-to weapon is his whip. While Ranse is learning how to shoot (or trying), Valance is not a shooter.

Valance's hand of aces and eights--the so-called dead man's hand--is so on-the-nose that it almost feels like a cheat, yet it also ties this story to Western myth. Valance is linked to Wild Bill Hickok, and his dialogue before he heads out into the street echoes a heroic character who has been called out rather than a villain who is probably dying to get out there to do some damage. Unlike many another Western story, the killing of Liberty Valance is not cheered. It's not even the climax of the film. Return to Stagecoach for a moment, or 3:10 to Yuma or High Noon or Shane or Duel in the Sun, or most any Western really--the gunfight is the climax, the gunfight is the point. But here, the aftermath is important. When men speak ill of Ranse, Doniphon strikes one then he heads home, drunk, and sets fire to his own place. This is not a film about violence solving things, though it relies quite readily on the belief in such an idea. Instead, this is a film about how violence is destructive. It's one of those ideas that's so obvious, we don't think about it most of the time. Hell, the Western is all about the opposite. The Western invokes violence as if its committing is a righteous act.

But here, Ranse questions building a life on killing a man and Doniphon, after admitting to that killing, refers to it as "cold blooded murder." It's as if The Man Who Shot Liberty Valance, like America, wants to have its cake and eat it too. Back when John Wayne was playing the outlaw Ringo in Stagecoach, Jimmy Stewart was playing Mr. Smith, going to Washington. This film relies on both of those images, two sides of the American cinematic coin to offer up something of a fable about how violence does and does not solve things. How we're a nation built on violence, and prone to return to it time and time again, and yet we pretend to abhor it. Or, maybe we do abhor it. We just like it, too.

I'm reminded of Julie's debate with Ishmael in Daniel Quinn's My Ishmael over why we keep trying to improve the people we are rather than returning to the better people we were (to simplify the topic greatly). We like the legend. We like that we are--or believe we are--inherently bad. We like that sometimes one of us, or a group of us, gets to commit great violence for a great cause. That's a story we can get behind.

I'm sure I will return to this again and again as this month of Westerns continues, but while the Western itself is not so popular anymore, so many of our other film genres, take the recent Mad Max: Fury Road or The Avengers: Age of Ultron--so much of that filmic structure is built on what the Western created. Our heroes don't wear cowboy hats and boots anymore, but they are still fundamentally the same, flawed men prone to violence, but under the right circumstances, that tendency becomes useful and its application becomes something worth cheering.

(And, that ought to make up for yesterday.)