they think they know him. they heard his name

Billy the Kid was likely a teenager when he hooked up with Tunstall. Tunstall was only 24. Here, though, in The Left Handed Gun Paul Newman, age 32, portrays Billy. Colin Keith-Johnson, age 62, portrays Tunstall. But, maybe the bigger problem right off the bat is the title. Billy the Kid was not left handed. The famous tintype of Billy-- 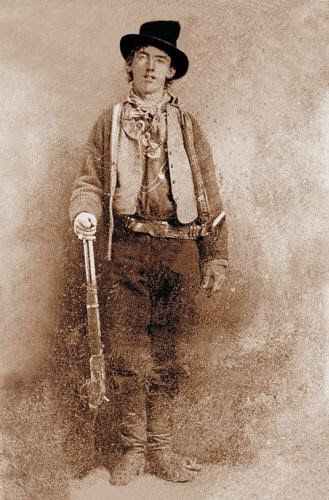 --was reversed and, I guess, no one noticed for a long time. So, Billy was "left handed" even though he wasn't.

By the way, that gun is on display at the Autry here in Glendale: But, let us return to that first image for a moment. Back in... the early 90s--I forget which year for sure. A couple of my sisters were in college out of state and we drove to visit them or drop them off or pick them up... This isn't much of a story, this part, with all these vague details. Anyway, we drove through Fort Sumner, New Mexico, where Billy is (allegedly) buried. (More on that detail in a few weeks when I watch Young Guns II.) In a little museum attached to the cemetery, I bought a print of that image. Rather arbitrarily, I hung that print on the outside of our bathroom door, and no one ever bothered to move it. It remained there through the 90s and when I moved out to live with my future wife, I hung it on our bathroom door. It made two more moves, though in the current apartment it sat on the back of the toilet rather than hang on the door. Then a leak in the ceiling ruined the print and it's no longer around. I should get another one.

(Sidenote: my sister Brooke has a print of that image in her bathroom because I, for no particular reason, made that a thing.)

The Left Handed Gun mixes functions of Wright's (1975) classical plot and vengeance plot. Function #1 of the classical plot: "The hero enters a social group." Function #2: "The hero is unknown to the society." Both of these fit Billy when he joins Tunstall's men. But then, Tunstall is killed. Function # 1 of the vengeance plot: "The hero is or was a member of society." This is not the case with Billy. But, function #2: "The villains do harm to the hero and to the society." This film offers the usual setup to Billy's story--though he hasn't known Tunstall very long, he wants revenge. That is where is killing begins. Really, his first kill was months earlier (Tunstall was killed February 1878). This is how the Time-Life Old West book on Gunfighters tells it:

The civilian blacksmith at Camp Grant, a burly fellow named Frank "Windy" Cahill, enjoyed making fun of the rootless youngster. One day in August 1877, he called the Kid the unlikely epithet of "pimp." The Kid, in turn, called the smith a "sonofabitch." Cahill jumped on him and threw him to the ground. Like everybody else who made a claim--no matter how slender--to manhood, the Kid wore a gun. He pulled it and fired. "He had no choice; he had to use his equalizer," a witness said. Cahill died the next day, and the Kid was locked in the Camp Grant guardhouse. A few nights later he broke out and got away. (Trachtman, 1974, p. 183)

3. The society is unable to punish the villains.
4. The hero seeks vengeance.
5. The hero goes outside of society.

Except it cannot have its ending. The hero cannot enter society (function #13). This movie doesn't deal much in the organized reality of the Lincoln County War or the fight between the House and the Tunstall-Chisum-McSween faction, but the story should fall closer to Wright's professional plot, except the "job" is vengeance...

1. The heroes are professionals. [In this movie, it's really just Billy with a couple hangers on. They don't come across as very organized.]
2. The heroes undertake a job. [Again, the "job" is vengeance. No one is paying, but this movie is not as straightforward a Western film as others have been.]
3. The villains are very strong. [But, they barely register here. It's like this movie wants to be more like Young Guns II will eventually be, dealing with Pat Garrett and Billy the Kid. Pat here talks Billy out of shooting a man just for pointing a gun at him. Pat tells Billy not to make trouble at his [Pat's] wedding. Pat is the voice of reason; of course, in the third act, Pat will turn on Billy, become a lawman and hunt him down.]
4. The society is ineffective, incapable of defending itself. [For the purposes of this particular movie, the story of the Lincoln County War, "society" is not the larger society necessarily but the Tunstall-Chisum-McSween faction. Without Billy's will, they might have done nothing against those who were responsible for Tunstall's death.]
5. The job involves the heroes in a fight.
6. The heroes all have special abilities and a special status. [This fits better with Young Guns or Young Guns II more than this film. Here only Billy seems special, but picture Lou Diamond Phillips' Chavez y Chavez or Keifer Sutherland's Doc in that later film--they've got unique characteristics that make them more than just hangers on.]
7. The heroes form a group for the job. [Since this is mixed up with the vengeance plot, the group already exists and is the society that was harmed.]
8. The heroes as a group share respect, affection, and loyalty. [Again, something better represented in Young Guns than here.]
9. The heroes as a group are independent of society. [This one is problematic given my deliberate conflation above of the group and the society, but oh well.]
10. The heroes fight the villains. [I'm trying to remember if anyone but Billy is left after the shootout just now before Billy was captured.]
11. The heroes defeat the villains. [This one becomes problematic in the story itself. When we make Billy the hero of his story, we're going to have a problem. Idealize the outlaw, even if you offer up good reasons for him to do what he does, inevitably, there's a standoff between him and the law. Right now, the townspeople are begging for them to bring Billy out to be killed early. On the one hand, this presents them as bloodthirsty and a little villainous. But, on the other hand, that woman crying for "the boy" because her husband was killed has a pretty damn good point.]
12. The heroes stay (or die) together. [I imagine a good comparison between the likes of, say, Butch Cassidy and the Sundance Kid and Young Guns when I get to the latter. That standoff at the end of Young Guns may not end with all the heroes dead, but it does leave their group broken and useless, the Lincoln County War over.]

Westerns don't have to follow Wright's plots, of course. Westerns came first and then he put together these plots and functions. Wright himself points out that Propp's analysis of Russian folktales, leading to his plots and functions was more straightforward because "his tales were folk, popularized and standardized by many retellings, whereas my tales are films--stories based on a social myth, but created by specific individuals for popular acceptance and never changed or standardized by public retelling" (p. 25).

Will, then, the various Billy the Kid films become more standardized as this month continues? I've got a few more to watch. I suppose we'll see.

The outlaw hero is a standard enough story--even this film can mostly be mapped onto Wright's professional plot with a little vengeance plot thrown on the front end.

One notable thing before I go: this came out in 1958, and there is little of the post-World War II element I've been referencing in relation to previous Westerns. Maybe enough time had passed that the genre was moving on. Keep in mind, of course, that Billy is supposed to be a teenager as this movie begins, and was supposed to be played by James Dean (who would have been in his 20s when he was cast). Thematically, this film plays a bit like Rebel Without a Cause except with the hero getting shot in the end (which I how I wished that movie had ended when I watched it some years back). This is more a troubled youth film than a challenged masculinity film.