so many men wasted so badly

If I can manage it, three movies today: Fistfull of Dollars, For a Few Dollars More and The Good, the Bad and the Ugly.

"It's not really easy to like something you know nothing about," the Stranger says about a half hour into Fistfull of Dollars. He's talking about peace, but the thought is much the same for the audience. We don't know this guy, but we like him. Like many a Western hero, he rides into town an unknown. Unlike many another Western hero, he is not readily introduced thereafter through revealing dialogue. This guy's coming manipulations and his motivations are revealed in dialogue but not his identity. Who he is--that remains an unknown. Except inasmuch as he is like the classic Western hero.

Function #1: "The hero enters a social group" (Wright, 1975, p. 41). We've seen men who had been away for a while (e.g. Ethan Edwards in The Searchers) but also complete strangers (e.g. Shane in Shane). Here we've got the Man with No Name, the Stranger, Joe. That he comes from an Italian/Spanish/German production--a so-called Spaghetti Western--just adds to the mystery. He really shouldn't represent some quintessential American ideal like many a Western hero should. (Plus, it's basically a remake of Kurosawa's Yojimbo.)

Function #2: "The hero is unknown to the society" (ibid). The audience would know Clint Eastwood from TV's Rawhide where he played one of the heroes. Yet, here he is more like a demon tempting the two sides into violent altercations. Eastwood's character is no hero. Clint Eastwood later described the transition: "In Rawhide I did get awfully tired of playing the conventional white hat. The hero who kisses old ladies and dogs and was kind to everybody. I decided it was time to be an anti-hero" (Hughes, 2009, p. 4).

It's interesting that the whole "white hat" idea has not really been a thing in any of these Westerns I've watched so far this month. Maybe that came from earlier, the silent era perhaps... Looked it up, and sure enough, it was a convention earlier. Started with The Great Train Robbery in 1903. The only real white hat I can recall is the Lone Ranger.

(I will not be dealing with the Lone Ranger in this blog; most of that character's presence has been on radio or television, and while I've got an attachment to 1981's The Legend of the Lone Ranger, it's not really that great a film, and I've avoided 2013's The Lone Ranger because it looked to be worse. It did result in some awesome LEGO sets, though.)

Function #3: "The hero is revealed to have an exceptional ability" (Wright, p. 42). Recall the four coffins moment.

Function #4: "The society recognizes a difference between themselves and the hero; the hero is given a special status" (ibid, p. 43). Both sides buy information from the Stranger. Until he turns on them.

Function #6: "There is a conflict of interests between the villains and the society" (p. 45). The society being Baxter, of course.

Function #7: "The villains are stronger than the society; the society is weak" (ibid). Ultimately, it comes down to the Rojos and the Stranger.

Function #8: "There is a strong friendship or respect between the hero and a villain" (ibid). As the final gunfight gets going, the Stranger quotes Ramon's own words back to him.

As For a Few Dollars More begins, we get to the most obvious function of the classical Western: function #9: "The villain threatens the society." The professional plot avoids this somewhat, but this is a necessary part of most Westerns and most action films, generally.

Function #10: "The hero avoids involvement in the conflict." This is debatable in Fistfull of Dollars. The Stranger avoids direct involvement for a good portion of the film but he is manipulating events the entire time and the final conflict involves him directly.

Backtracking a little, we have a new "hero" at the start of For a Few Dollars More--Lee Van Cleef's Man in Black, Mortimer. He comes into the town of Tucumcari (illegally stopping the train he's on) and immediately sets after a wanted man--Guy Calloway. He takes out Calloway then inquires after another wanted man--Red Cavanaugh. Turns out another guy is already after Cavanaugh; they call him Manco (Spanish for one-armed).

The Stranger from the previous film in the town of White Rocks. Sure enough, he does everything with just his left hand, keeping his right hand on his gun. On the one hand, we could take this to mean that a) he has grown so paranoid and been in so many situations where he's had to kill people that he just keeps his hand there because, well, where else is it supposed to be? b) it's like lesson in mythbuilding; the legend is of this Man with No Name who's so quick on the draw that his hand must actually be a gun. So, of course he keeps it hidden under his poncho so as not to draw attention to it. He is more than jut a gunfighter (or now, apparently, bounty hunter); he is literally part gun.

Manco takes out Cavanaugh, and then we're on to our villains. El Indio's gang break El Indio out of prison. With this army of bad guys and two bounty hunters already introduced, this seems more like a professional plot than the classical plot, but let us return to the previous list first.

Function #11: "The villain endanger a friend of the hero" (Wright, p. 46). Of course, the Rojos have Silvanito strung up when the Stranger comes for them.

Fistfull of Dollars, aside perhaps from the Stranger's deliberate manipulations of the two sides--and function 15--fits every function of Wright's classical plot. That Function #15, though... "The society accepts the hero" (ibid). This is only true in the end of Fistfull of Dollars because there are very few characters that we know left in town--notably Silvanito and Piripero.

We're not getting much of the society here in For a Few Dollars More, though. Not until we get to El Paso. But, even then, there is little detail to any of them--the banker Mortimer talks to, the kid who talks to Manco, the folks who run the hotel (though there is a comedic moment with them because the woman finds the tall Stranger attractive and the man turns out to be very short). Wright tells us that, in the professional plot,

The social values of love, marriage, family, peace, and business are things to be avoided, not goals to be won. As a result, the relations of the heroes, or of the villains, with society are minimal. Society exists as a ground for the conflict, an excuse for fighting, rather than as a serious option as a way of life. (p. 86)

Mortimer and Manco are not heroes. They are not after El Indio because he's a bad guy and society needs saving; they are after him for money.

(Joseph Egger, who played the coffinmaker Piripero in Fistfull of Dollars reappears here as the Prophet. The alteration of his role from practical bystander to something implying the supernatural falls in line with the mythbuilding suggested above.)

The hat-shooting bit between Manco and Mortimer makes for good comedy in a movie that otherwise doesn't deal much in laughter.

Though Manco and Mortimer talk in the latter's hotel room, little personal detail is exchanged. But, then we get a flashback with El Indio, who we already know more about than either of these bounty hunters. El Indio is more known to us than either of our (anti-) heroes.

Since these films come from outside the United States, I wonder if we can't take some meaning from this; is Leone trying (not necessarily consciously) to say something about America that an American-made Western cannot? Is Cold War America an anti-hero, fighting its proxy wars just as the Stranger instigates violence in Fistfull of Dollars while staying mostly out of it? Does his more direct involvement in For a Few Dollars More take this to a new level or detract from the commentary? It's hard to be sure. If the story of Fistfull of Dollars were primarily the experience of the bystanders, the townsfolk who's town is being shot up and burned, there would be clear commentary. But, when there is no real presence for the society--when El Indio and his men come to rob the bank finally, there are no townspeople to be seen--can we infer a sense that violence is inevitable and the hero must even partake for things to work out? Fistfull of Dollars fits the classical plot, sure, but that doesn't mean it has to backtrack to pre-Liberty Valance, pro-violence themes.

And then, it turns out it was a vengeance plot all along; we just weren't privy to some of the functions. 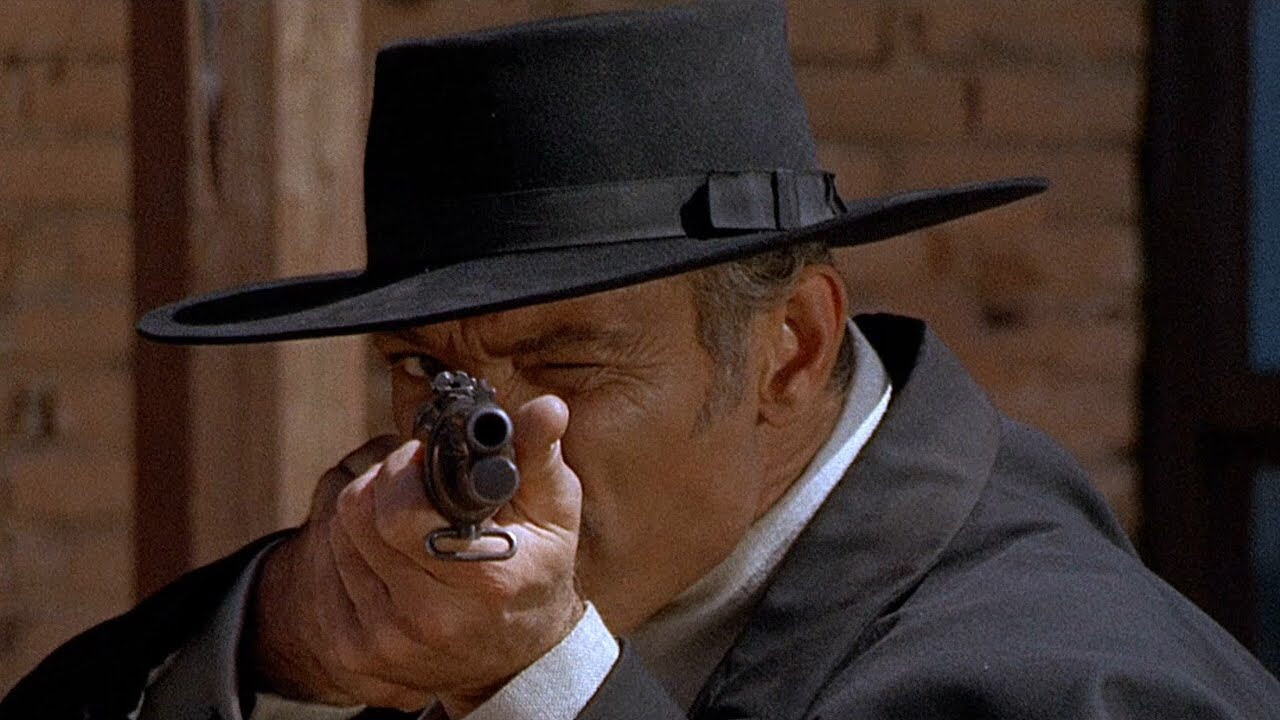 That Van Cleef is not supposed to be the same character in The Good, The Bad and the Ugly as he was in the previous film is a little odd as this movie begins. Sure, in Europe, these films were a year apart, coming out in September 1964, November 1965 and December 1966. But, in the United States, they all came out in 1967 (January, May and December), and I've only had a few minutes between them today. I see Van Cleef, with that long pointy nose and I want him to be Mortimer. He's even got a black hat. He's The Bad.

Eastwood is introduced in a different costume than before as well, which makes things more strange. He's supposed to be the same character, though here he's called Blondie. He's got a hat that's almost white. He's The Good, but he's scamming the locals for reward money on Tuco (Eli Wallach), The Ugly, over and over again.

Except for a couple costumes evoking the union uniform, the previous two films in this triology made no reference to the Civil War. But here, we have confederate soldiers arrive in town. This film takes place during the Civil War (and before the other two films). We don't get to know why the soldiers are there right away, and the cannonfire that keeps Tuco from hanging Blondie is both funny and confusing.

Later, seeing numerous wounded soldiers, we see more of the toll of the war suggested (but not shown) by other Westerns.

(Insert here: me, just sitting and watching The Good, The Bad and the Ugly rather than writing about it.)

Taken within the trilogy, we can see the Civil War (figuratively) as the thing that tore away what identity Blondie had, so that he would go on to become Manco and Joe, the Stranger, the Man with No Name.

Leone's direction and Morricone's score would echo on in many a later film. The Western film would never... could never be the same again.