if it doesn't fit, make alterations

Strange jump in time, from The Outlaw Josey Wales in 1976 to Silverado in 1985. It's not that there were no Westerns released then--there were a lot. Nothing too... big, though. I considered combing through the ones during those years and find a few (because my month of Westerns needed even more titles to it), but then I figured I could let the Vietnam-era Westerns be left behind and move into the Reagan-era, see what that gave us. Extra benefit, we're into Westerns that I saw in the theater now, actually a few past. I'd seen The Man from Snowy River, Urban Cowboy, The Gambler, The Legend of Lone Ranger, Pale Rider...

My first opportunity this month to deal in box office. Yay.

Silverado came out the same weekend as Mad Max Beyond Thunderdome and Explorers. Separately, I would imagine each of those being films we saw opening weekend, but with all three, I'm not sure. A week before was Back to the Future and The Emerald Forest which I know I also saw in the theater. The week before that was Pale Rider and St. Elmo's Fire, the week before that Cocoon. The weekend after Silverado would be E.T. The Extra-Terrestrial (and Day of the Dead and The Legend of Billie Jean but I wouldn't see those in the theater). Rambo: First Blood Part II was in its 8th week, The Goonies in its 6th, Fletch in its 7th. That's a lot of movies in the theaters over a couple months.

Silverado offers us a West in which men pulls guns over just about anything--Paden (Kevin Kline) shot a man who was riding his horse, which seems sort of justified for the West (we hear later that killing cattle is a hanging offense round these parts), but then he also shoots a guy who has his hat, which seems, well, not so justified. Yet, he's one of our good guys.

There's nothing too original about the story of Silverado--is there ever anything too original about any Western? But, director (and cowriter) Lawrence Kasdan puts some serious energy into the setpieces that makes this film far more fun than many another Western. Roger Ebert, in his review writes--and it's a great review all the way through, certainly worth a read--quite aptly:

Too many Westerns in the last 15 years have been elegies to a dead past, played out by actors remembering the cowboys roles of their youth... "Silverado" contains a group of talented young actors (Scott Glenn, the oldest, is in his 40s), and this is not their last Western but, in many cases, their first.

Leone may have reinvigorated the Western with his Dollars trilogy, but he didn't resurrect it. I remember Pale Rider feeling like an echo of that trilogy rather than something new. Silverado feels like something new. It's not that new, as I already pointed out, but it feels new. It makes the Western setting feel like something that isn't already dead. Ebert writes, "if there is any nostalgia connected to this film, it will be found in our hearts and not in the characters on the screen." And, really, that is the key to the Western (or any genre). Familiarity and expectation. We come in for something and we get the thing we want. And, we have a good time. The details make it interesting, but it's the familiar details that get us in the seats. 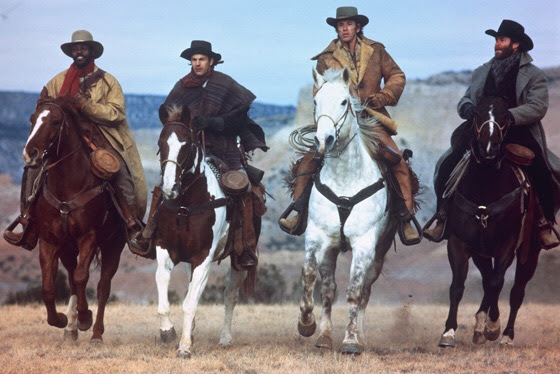 The good guys are not so good as they once were... Actually, that's a weird thing to say at this point. The good guys have not been so good this entire time. I think I started into the Western about a decade late to really get the black hat/white hat obviousness, just like I mostly missed the Cowboys and Indians stereotype. Stagecoach had a remnant of the savage Indian to it, and The Searchers required its audience to assume, as Ethan did, that being among the Indians was a bad thing, but then it deconstructed that assumption, and for a while, Westerns mostly ignored the Natives in favor of conflicts among the settlers. And, those conflicts brought us good men that weren't all good and bad men that weren't all bad. Take 3:10 to Yuma for example, either the original or the remake--Wade is not an evil man, he just happens to murder and steal from time to time. The remake even plays up his second as a crazier, more trigger-happy contrast. In Warlock and Gunfight at the O.K Corral, we saw the law in the form of gunfighters who made more trouble than they solved. This isn't a new thing in the Western at all. Standing out from the black/white morality used to seem like an exception. Now it's the norm.

(Sidenote: at the dance before McKendrick's men show up to make trouble, there's a young girl dancing with a stick horse with nice big wheels at the end of the stick opposite the horse's head. And, I was reminded of a stick horse I had as a kid. I also had a Coonskin cap, and an Indian vest I picked up on a camping trip to Yellowstone, and there were toy pistols and cowboy boots. Westerns were right up there with Star Wars and superheroes for me as a kid. Ebert's review of Silverado, referenced above, begins with an anecdote about coming out of the theater after watching two Westerns and he and his friends would imagine themselves as the characters. I didn't grow up in a small enough town or stereotypical 1950s America, so I didn't go to movies with just friends that young, but I certainly imagined myself as the great characters. Luke Skywalker, Han Solo, Indiana Jones, Superman...

I was not just embodying film characters when it came time to play at home but identifying with them in the dark of the movie theater. People who didn't like movies--they confused me, growing up. I just didn't get it. (Don't much get it when my kids don't want to see movies as often as I do these days, either.)

It's interesting, coming so late in the Cold War, that Silverado has so many parties involved in its central conflict(s). We're beyond Vietnam now and it's like we don't even know who the enemy is anymore. And, we're not united on how to fight the enemy either. But, in the end, it still comes down to a series of standoffs and shootouts because that's how we like it.