your times is over and you're gonna die bloody

(Two movies today that were supposed to be on separate days. My schedule--already packed--got changed slightly a few days ago. Because of this schedule change--squeezing these two movies in before a roadtrip--The Wild Bunch will get most of the words today and I won't get to go off on a tangent about Butch Cassidy and the Sundance Kid as exemplar of a great screenplay. I would recommend, if you're interested in screenplays, that you go read William Goldman's Adventures in the Screen Trade. In the meantime, I suspect an easy theme that will tie these two films together--aside from the violence; that was probably just a product of advances in filmmaking combined with the atmosphere of 1960s America.)

Most of the Westerns I've watched this far offer little more than an implication of religion, nothing but the presence of a preacher of some sort. The remake of True Grit, through the voiceover narration only, offers some sense of a deity and a religious worldview. I'm not about to suggest that The Wild Bunch is going to offer up a serious view on religion--maybe it is, maybe it isn't, it has been a good long while since I've seen the film and mostly I just remember it for the violence--but it is interesting that we actually see a religious service in the opening sequence.

Juxtaposed with some children watching ants swarm over scorpions and (apparent) soldiers coming into town... to rob a railroad office.

Oh, and it was just a Temperance Union meeting. But, that's fairly religious. Also, along with some of the costumes, it establishes a particular moment in history--this is not the Old West anymore but the twentieth century. This is how the Old West ages, this is how the Old West dies, in a paraded of innocent bystanders and graphic violence. It's as if this is the religion of these men, which may be a fair assessment. But the world is moving on. There is no place for them anymore.

And the children burn the ants and scorpions together. Then the townsfolk come to complain to the good (?) guys in that fight about using their street as a battlefield. This is not one of the functions of Wright's (1975) professional plot but it is part and parcel of it--that the society is a backdrop that is not on either side in the fight to come. The two sides are both dangerous--hell, the Harrigan (Albert Dekker) just told his men (the side representing the law) that if anyone quits on him, there's a thousand dollar bonus to whoever kills that man.

But we needn't look beyond that opening sequence to understand the place this film might represent in American cinema. We are not offered characters. We are not even offered types; arguably, when we meet Ethan Edwards in The Searchers or Shane in Shane, we are not immediately offered character detail except that they are coming in from the wilderness. That these men are dressed as soldiers might suggests in retrospect a comfort with violence, in context of decades of Western film history, soldiers, especially still in uniform, are the good guys. (Of course, they are dressed as soldiers so they can ride into town without suspicion.)

Then we have children entertained by death, and women (and a few men) singing religious hymns and speaking against the dangers of alcohol.

(Coming right after True Grit, this makes for an interesting commentary, especially as now Pike (William Holden) and Dutch (Ernest Borgnine) are having a drink before bed... I don't think Peckinpah is suggesting that drink is dangerous, but it makes for a nice binary opposition--one group sees alcohol as a danger, the other a comfort.)

Those children entertained by death are like the audience for the Western, those Temperance Union folks like censors or some Conservative movement against the Western and its glorification of violence. (It's no coincidence than that this film, as violent as it is, kills off a few of them in the opening melee.) I don't know of a particular crusade against the Western, but there are always complaints about film content, too much sex, too much violence.

(Recall the upcoming story in the opening news report in Groundhog Day--"Up next, Diane Kingman looks at sex and violence in the movies." Davies (1995), in writing about cultural crisis in Falling Down and Groundhog Day, makes a point of referencing that news story and Phil's previous mention of gang wars in California as the only real references to the world outside Punxsutawney. He calls these "cursory references to crises that are constructed both as endemic and as media-saturated, if not media-produced" (pp. 224-225).)

Here, in The Wild Bunch, we have some of that media production (see the parenthetical if you skipped it). Also, again, mythmaking. Or, perhaps, myth-deconstruction. Maybe the religion here is the Western itself. And, violence is a part of it. We are those children, entertained by the ants and the scorpions. But it doesn't matter which side are the scorpions, which side are the ants, because in the end, the credits roll, the insects burn, and life goes on outside the movie theater.

Unlike True Grit, this film harkens back to the Western before feminism. Women are barely present here except as sexual objects. The Mexican army men laugh when Angel (Jaime Sanchez) kills his former lover who is sitting in the lap of General Mapache (Emilio Fernandez) at the time. The violence arise right out of "traditional" patriarchal ideals that position women beneath men. (The women in the wine barrels are supposedly actual prostitutes, by the way, hired by Peckinpah.) She might as well have been a stolen hat, even if her funeral procession--all women--is briefly intrusive on the men's dinner. Women thereafter again become background only.

Though the plot has taken the men to Mexico, the film remains American. It remains a Western, primarily concerned with men and conflicts among men. That the larger conflict here is the Mexican Civil War suggests that the Western is trying to grow up, to move on from our Civil War, but it just can't handle detaching itself from the backdrop of historical conflict. The Western keeps coming back to metaphor, to history writ small. It wants to be about something real, something bigger than the film itself. Using post-Civil War America to comment on post-World War II America--that isn't even necessarily a conscious thing in most of these films, but just about every Western I've watched this month (maybe every single one, makes mention of the Civil War, has characters who fought in it, or who fight in it--in How the West Was Won, for example. It doesn't have to be conscious; but when certain ideas are in the zeitgeist, the screenwriter inevitably must include them, even if not on purpose. The Wild Bunch, Once Upon a Time in the West, Leone's Dollars Trilogy, even True Grit--these films might be understood as Vietnam-era Westerns, separate from the post-World War II Westerns. Lines between good and bad are not as clear, battlelines are vague and there are not even just two sides anymore.

(I find it interesting, looking at all of these mainstream Westerns and realizing I don't know why I--or other boys before me--really played Cowboys and Indians. Most of these movies don't involve that conflict. It's usually "Cowboys" and Lawmen. Maybe that was more of a thing in earlier Westerns or less mainstream Westerns, or maybe it was a TV thing. The Western, as I've seen it this month, is a genre dealing in conflicts over how the white folks ought to be living; when Natives are present--like in either version of Stagecoach, How the West Was Won, or even The Shakiest Gun in the West or The Searchers, which offer Natives with names but little personality--they are a faceless threat and might as well be wild animals as much as their personalities and motivations don't matter. Unfortunately, I do not have room to add Jeremiah Johnson to my schedule in the next few days; that is one movie I know has a stronger Native American presence and offers them some personality.) That's Harry "Sundance Kid" Longabaugh, Ben "Tall Texan" Kilpatrick and Robert "Butch Cassidy" Parker in the front, Will "News" Carver and Harvey "Kid Curry" Logan in the back. This photo they had taken for fun, but the photographer hung it in his window and a lawman recognized the bunch. This photo then made it onto fliers.

The sepia-tone old-timey footage leading into the film makes for an interesting link with cinematic history. This also puts a sort of bookend on the story since Butch and Sundance represent the end of the "Wild West." That's 1908. These are two men born after the Civil War had ended. In reality, but especially in Film Western history, this is the end of an era, detached from the Civil War and being brought to a halt by technology and industrialization.

Here's the train they exploded near Wilcox, Wyoming: 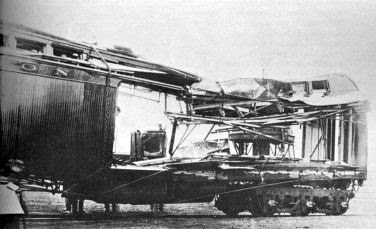 Robberies like that got the Pinkertons on their trail. Part of how they were tracked was where burned bills showed up spent. Including paid informants around the country, the Pinkerton Agency had more manpower than the US Army did at the time, supposedly. And they were relentless. They tracked Butch and Sundance all the way to Argentina. 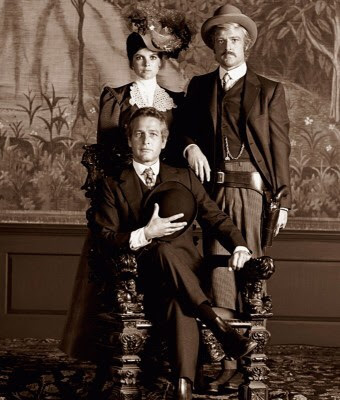 Here's the actual photo Sundance and Etta had taken before they left for Argentina: 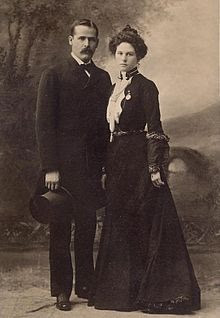 That both films end in horrible violence, but not in the United States, speaks to these films as Vietnam-era Westerns. Sure, in the context off the stories, Mexico and Bolivia are places to escape the New West and maybe find the Old again, but that these movies come at this time... this is not a coincidence.

Historical note, though: Butch and Sundance were not killed by the men surrounding them, and they didn't get up one last time to fight back. Butch shot Sundance in the head and then shot himself. Historian Paul A. Hutton pointed out at the end of the PBS piece on them:

Almost immediately, stories began that they hadn't been killed in Bolivia. We don't want the outlaws to die. We certainly don't want them to die the way Butch and Sundance died. As wild as they were, and bad as they were, they still represented something that Americans embrace, that wild freedom, and when they're gone the Wild West is gone.

Wright would concur. He writes about these two films as the exceptions to the professional plot professionals winning.

>But the exceptions are not major, and once again we can point to the ambiguity of the word 'defeat.' Butch Cassidy and Sundance defeat (or escape) society continually, until the last scene when they are faced with an entire army. Even here they are not actually killed, or at least their death is not shown. Rather, they are frozen in action, indicating that they cannot really die, but have indeed become a legend. In this sense the victory is theirs. The Wild Bunch also defeat society in every encounter, and they are not killed until they have destroyed the renegade army, thereby freeing the Mexican peasants from further oppression. In a clear sense, then, they too are not completely defeated but have a final victory. (p. 172)