sold out to the santa fe ring

(But first, a story:

Meant to be home in Los Angeles tonight. Stuck in Arizona instead. Car trouble. Up until the car trouble, today was going pretty well, though. We stopped off at Meteor Crater-- --and hiked down into Walnut Canyon-- --and that was before lunch. Car was making noise and I figured I'd get back to LA tonight, get it looked at in the morning. But, the car had other plans. Instead, we are still in Arizona, about 30 yards from this: And, really that's all you need to know about that.)

That this film begins with old man Pat Garrett getting gunned down and, plotwise, is much the same as the later Young Guns II makes for a nice echo of that later film, starting, as it does, with Brushy Bill Roberts, AKA (claiming to be) old man Billy the Kid.

Immediate impression of the casting... Coburn is good as a "lawman" and Kristofferson seems good as the outlaw but both seem a bit old for their roles, by like a decade or more. (Coburn has grey hair, for Phil's sake.) Their difference in ages--I just checked--is pretty close to the reality, though. Garrett was about 9 years older than Billy and Coburn is about 8 years older than Kristofferson.

Billy also seems a little... big. He was a small-ish guy in reality, as youthful as he was young.

Yesterday, we went to Fort Sumner where Pat Garrett (claimed he) killed Billy the Kid. Explored one museum and briefly visited another...

Backtracking, though, I got a shot of this at a place called Fox Cave the day before, down in Lincoln County: 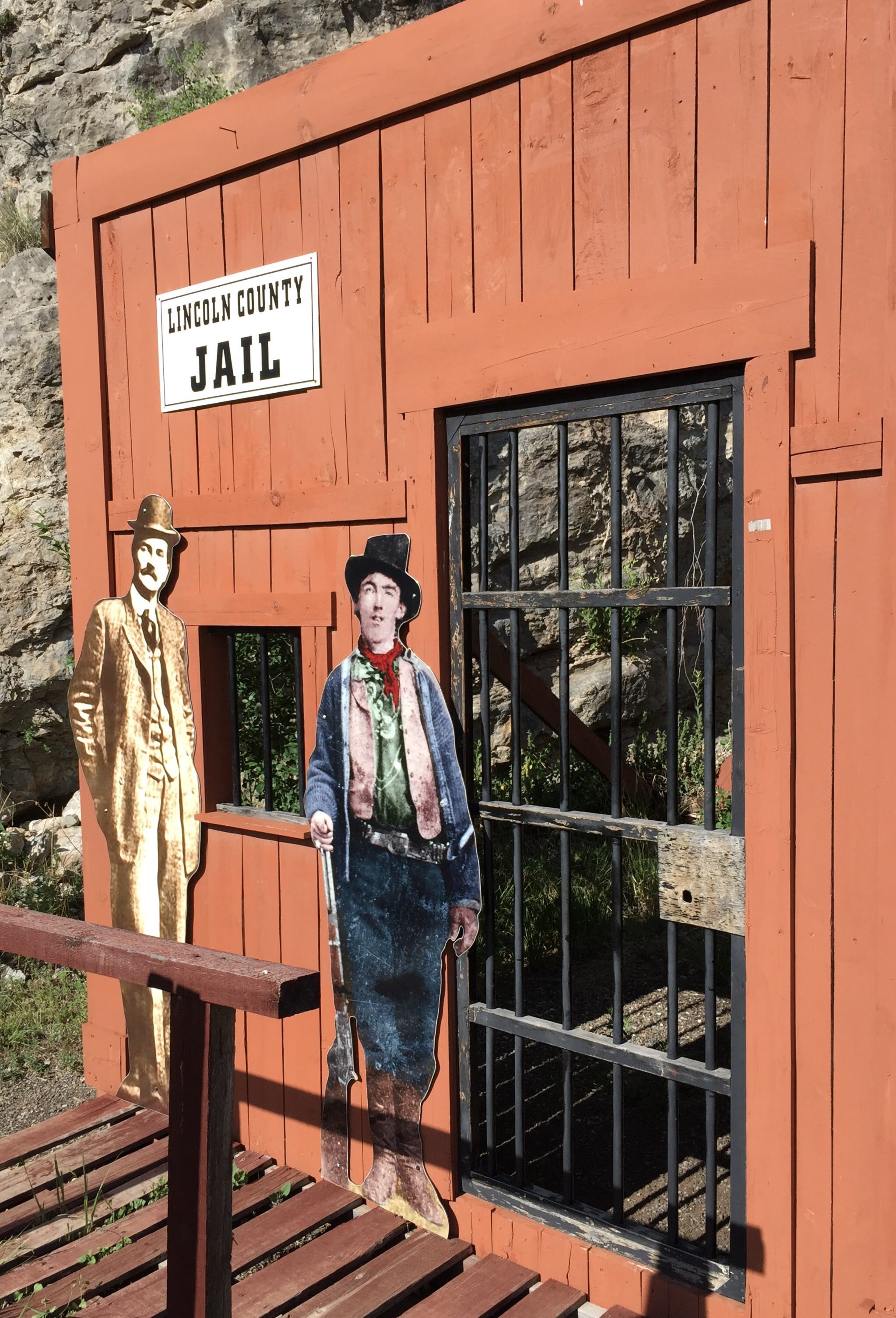 And I must interrupt this story to complain about what's going on in the film right now. Billy surrendered to Garrett and his men. The circumstances of his escape after being sentenced to death are famous. He killed two men with their own guns. But here, he finds a handgun hidden in the outhouse. (Interestingly, my Time-Life The Old West book on Gunfighters offers up both versions--"he shot [Bell] dead--either with Bell's own gun or, as some theorized, with a weapon a sympathizer had cached for Billy in the privy" (p. 190). That book also incluudes Billy's line to Bob Olinger, simply "Hello, Bob," before shooting him, which this film alters.) Billy's level of confidence is nice, though. After all, Garrett would later describe Billy thusly:

I've got to wonder about the money in the shotgun thing. They use that in Young Guns II also, and I don't know where it comes from.

Back to the story. Some shots from the museum: 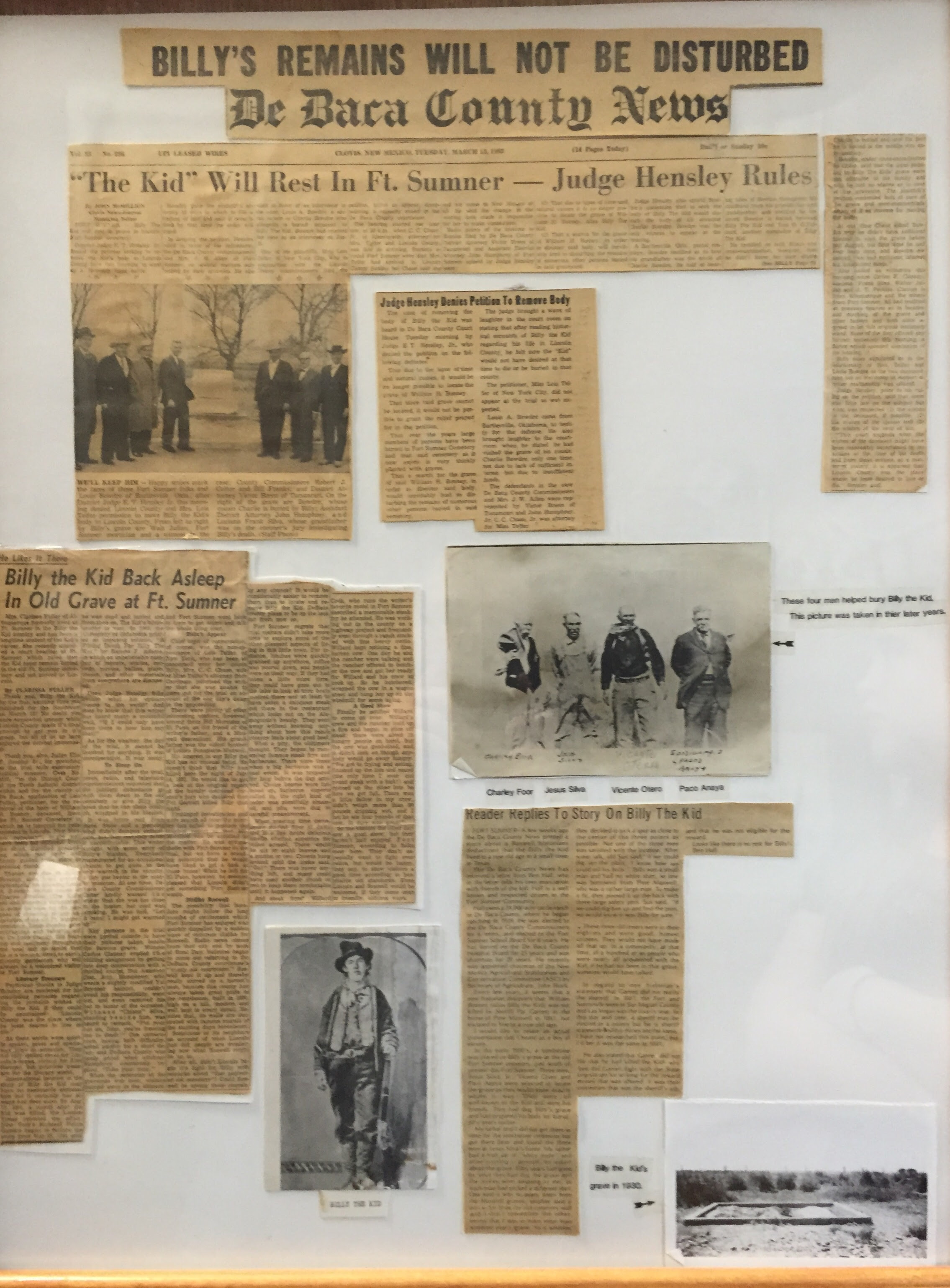 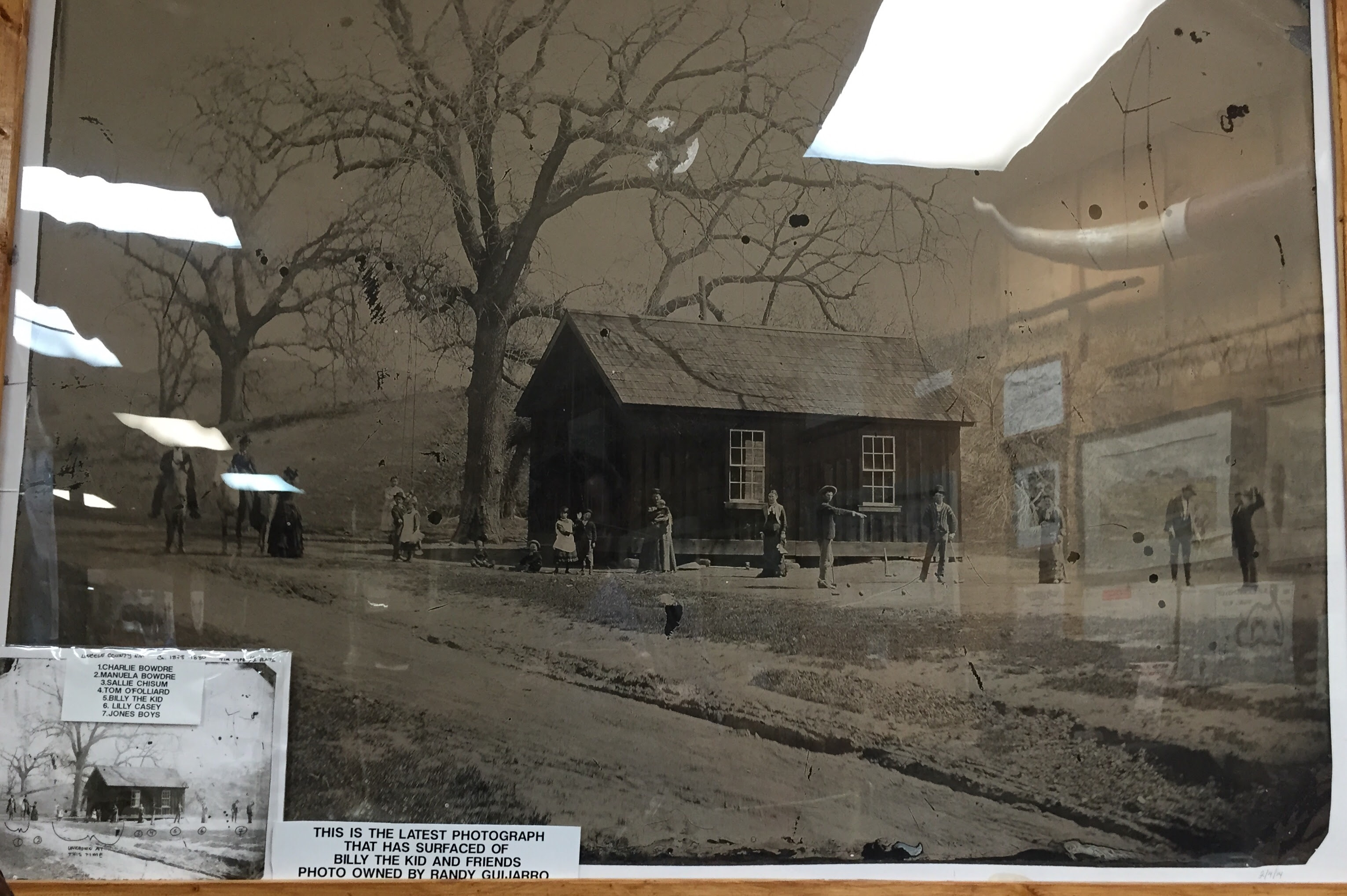 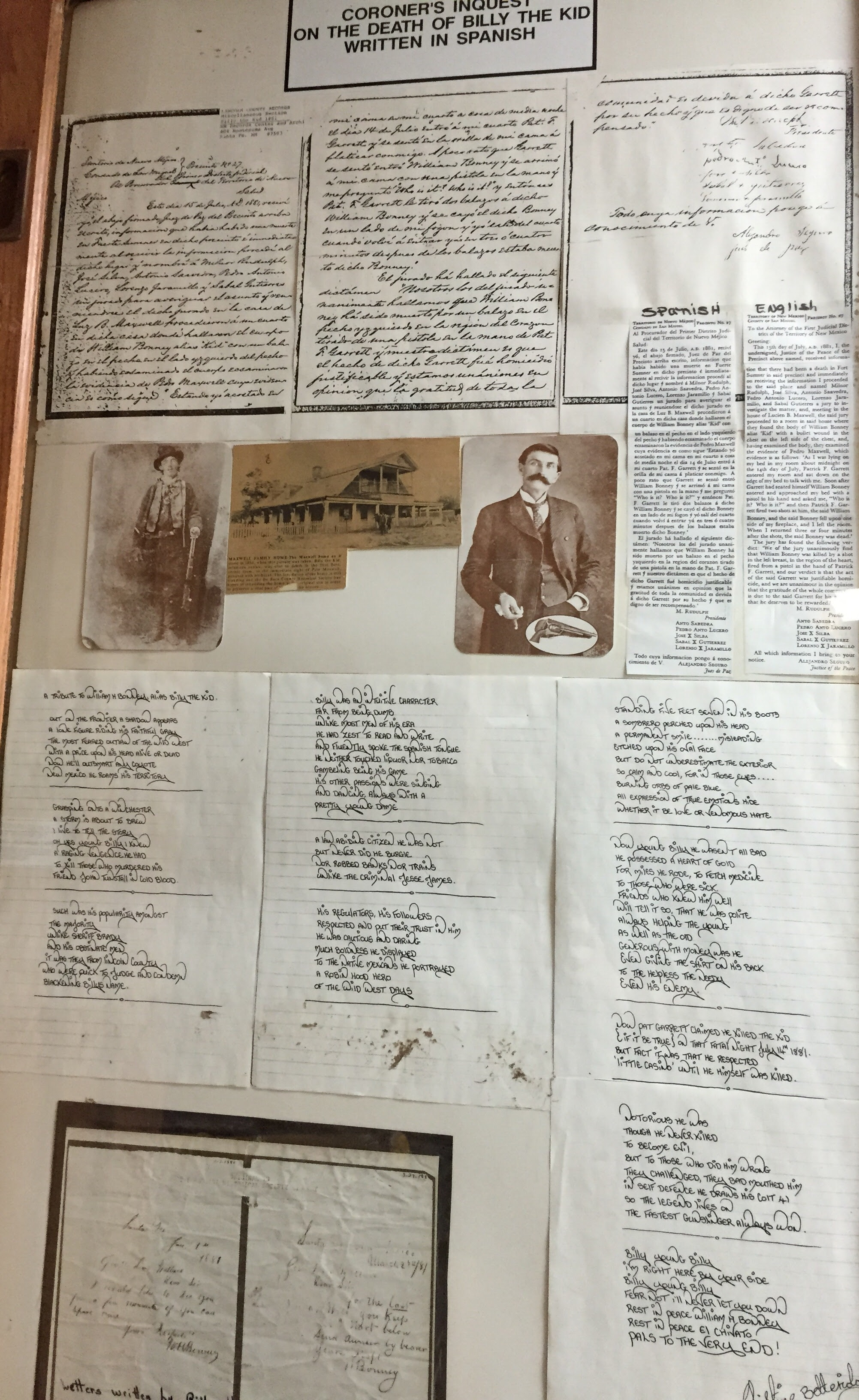 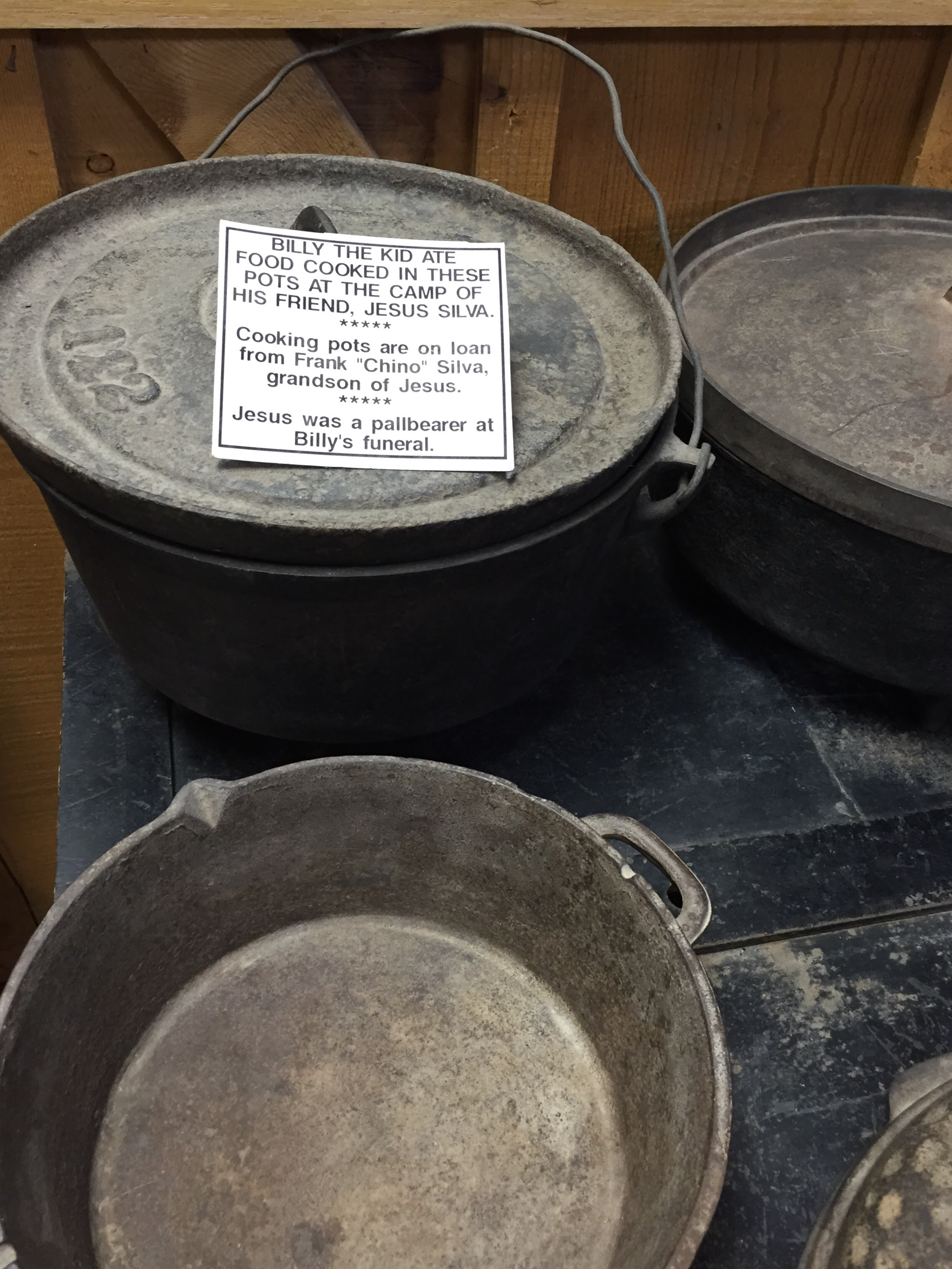 Jesus Silva is buried near Billy. This is his grave: 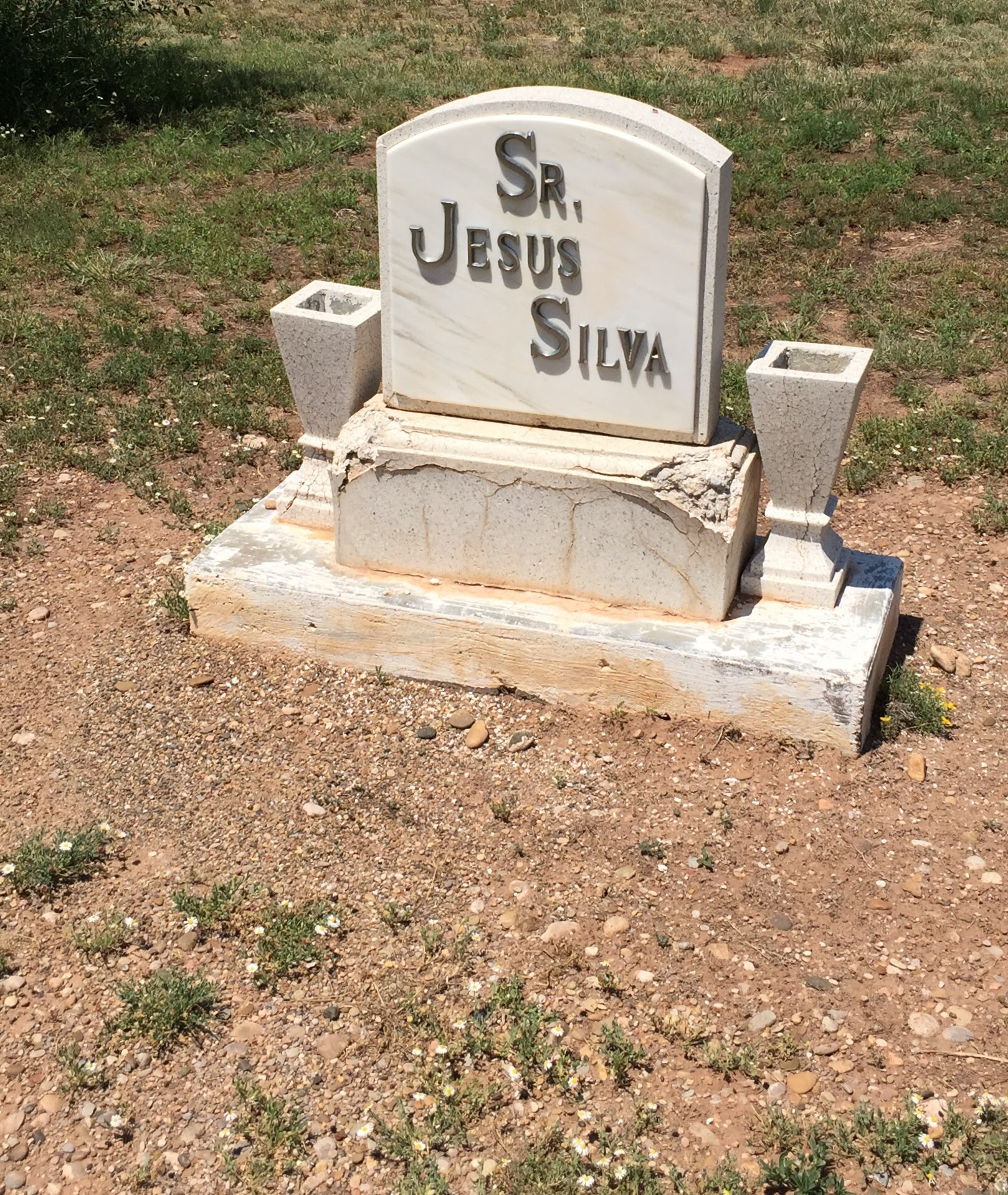 Billy's hat is too big, and where's his scarf? Just sayin' 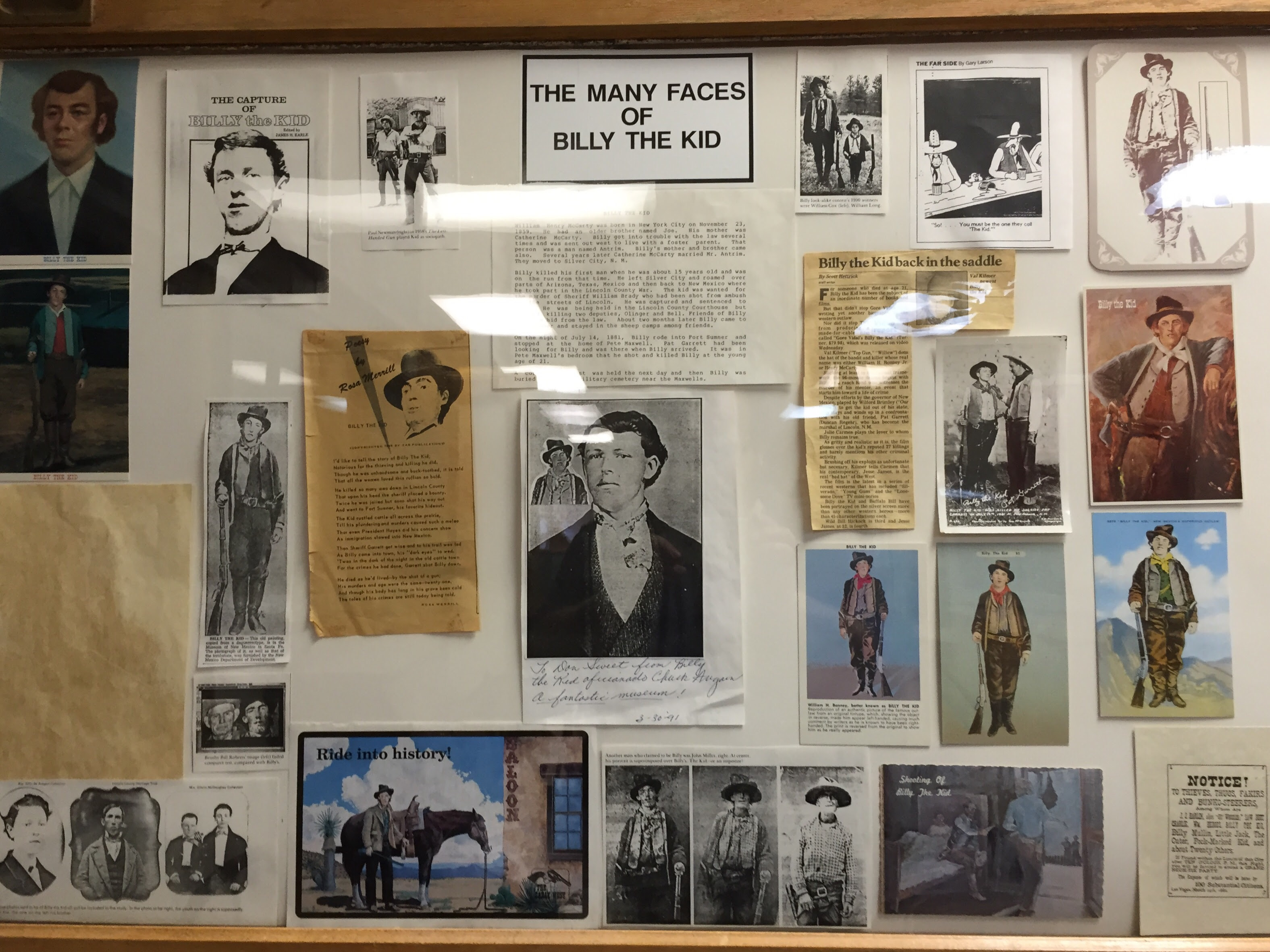 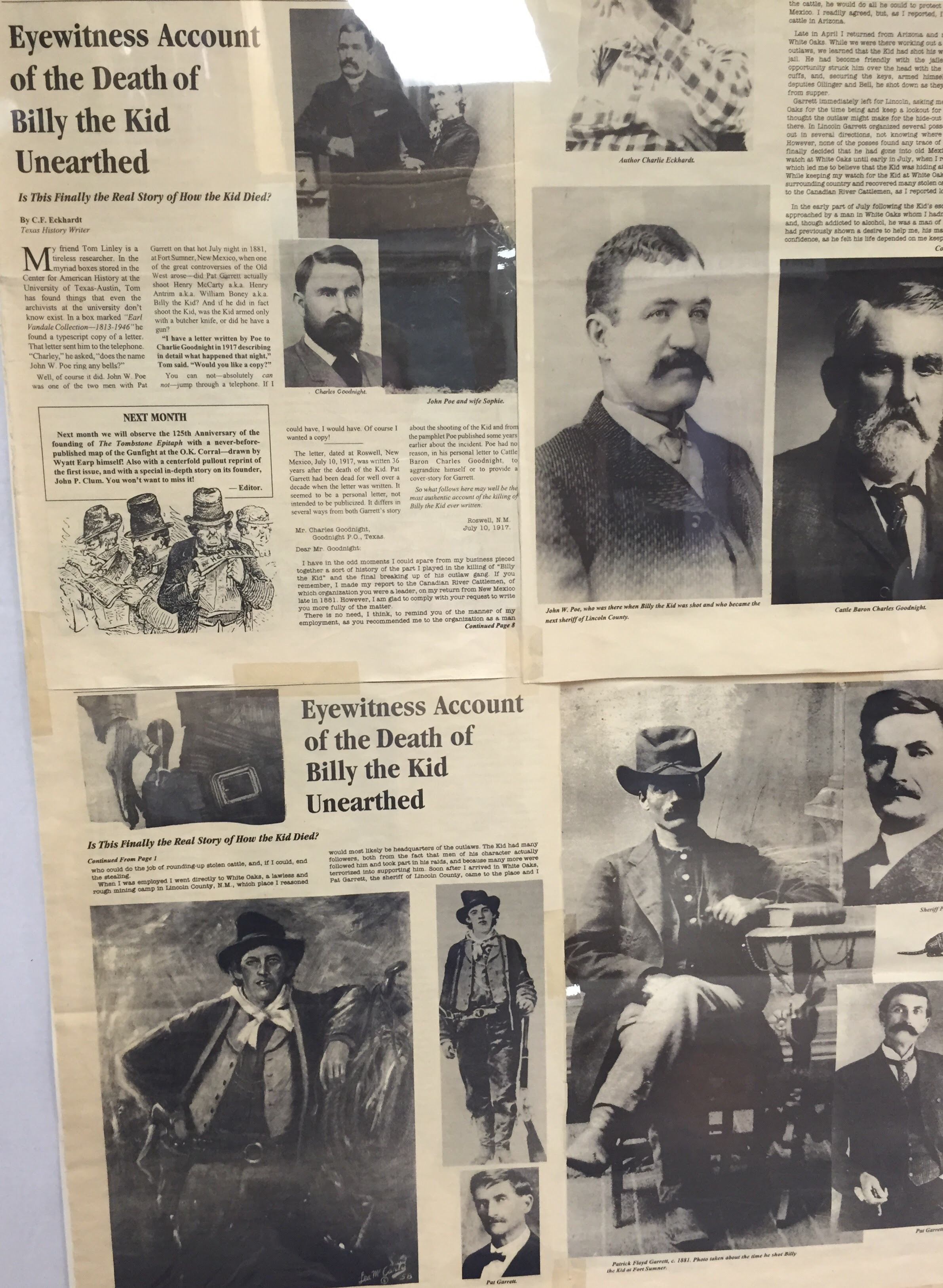 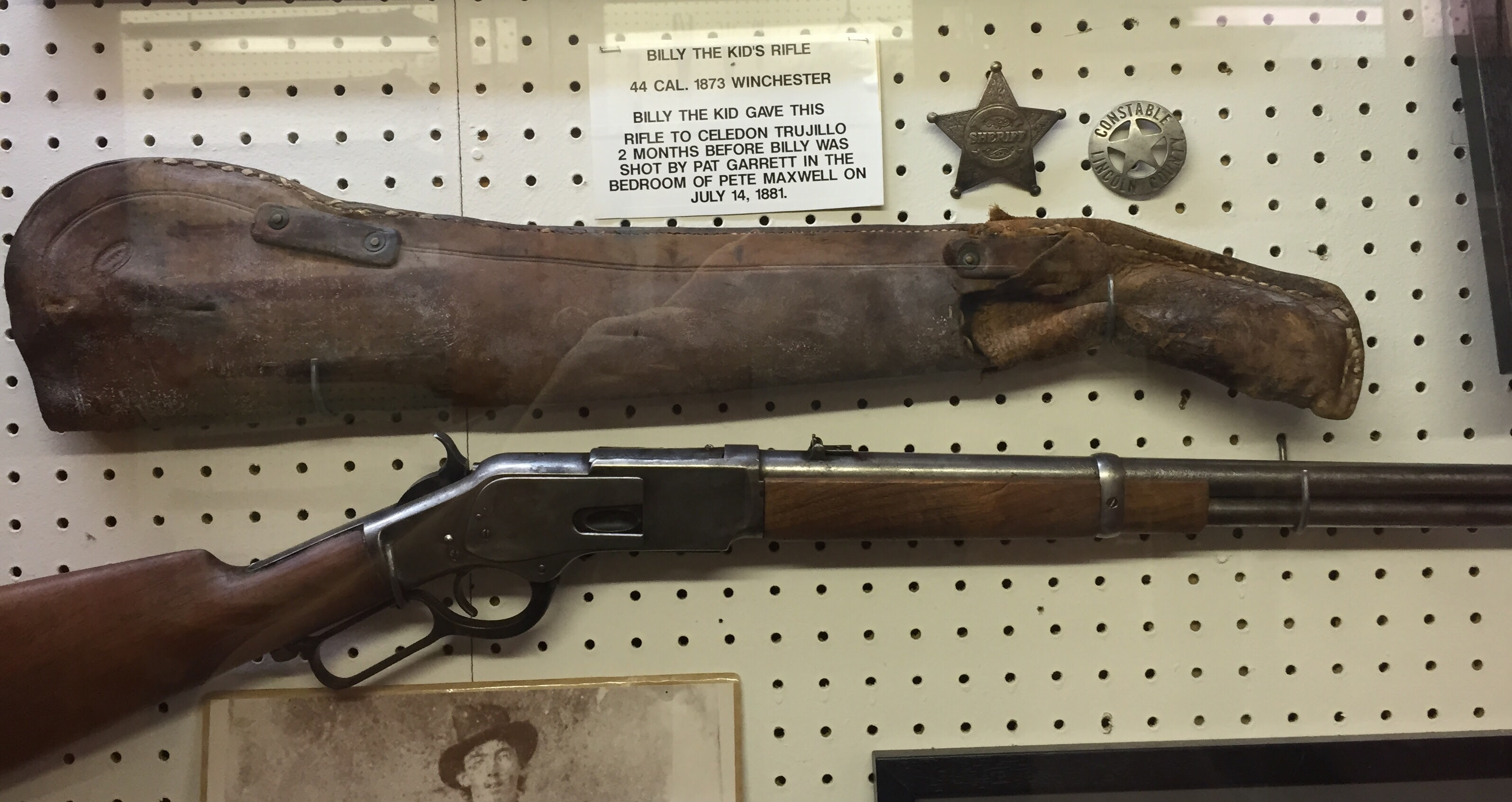 These two items are from the room at the Maxwell house--which was a wood house, like we see in this film (but still, out on open land instead of part of a close collection of buildings-- --and not the adobe-style thing we saw in The Left Handed Gun or will see in Young Guns II--where Billy was shot by Garrett. The business interests that helped fuel the Lincoln County War--the events of which came before the events depicted here (the first Young Guns covers the War--come into play with extra money for Pat nearly 40 minutes into the movie. While their inclusion is a nice nod to the history, it seems like a sidenote here.

The first museum had a replica of Billt's grave(s): 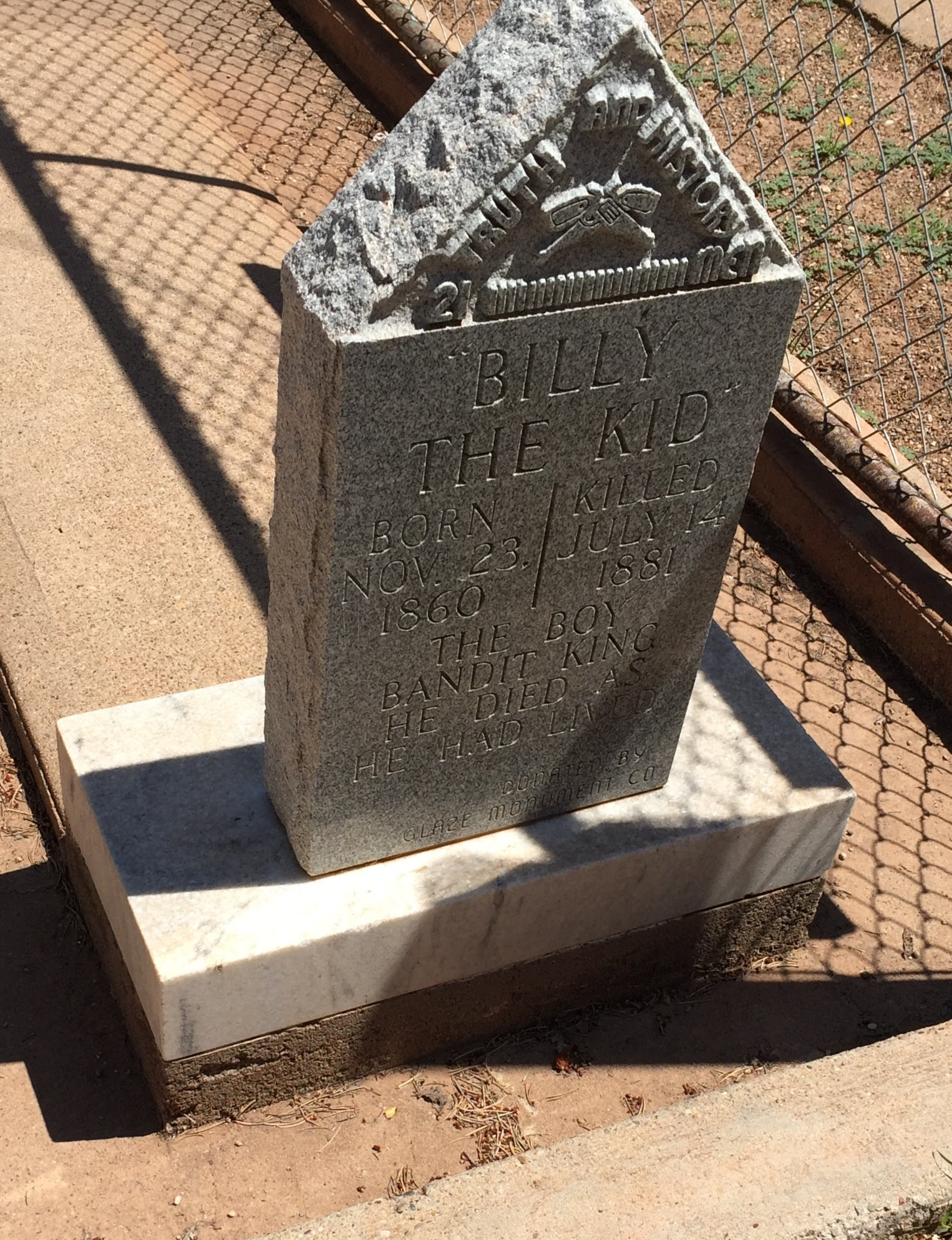 The real gravesite was a good 5 miles away-- 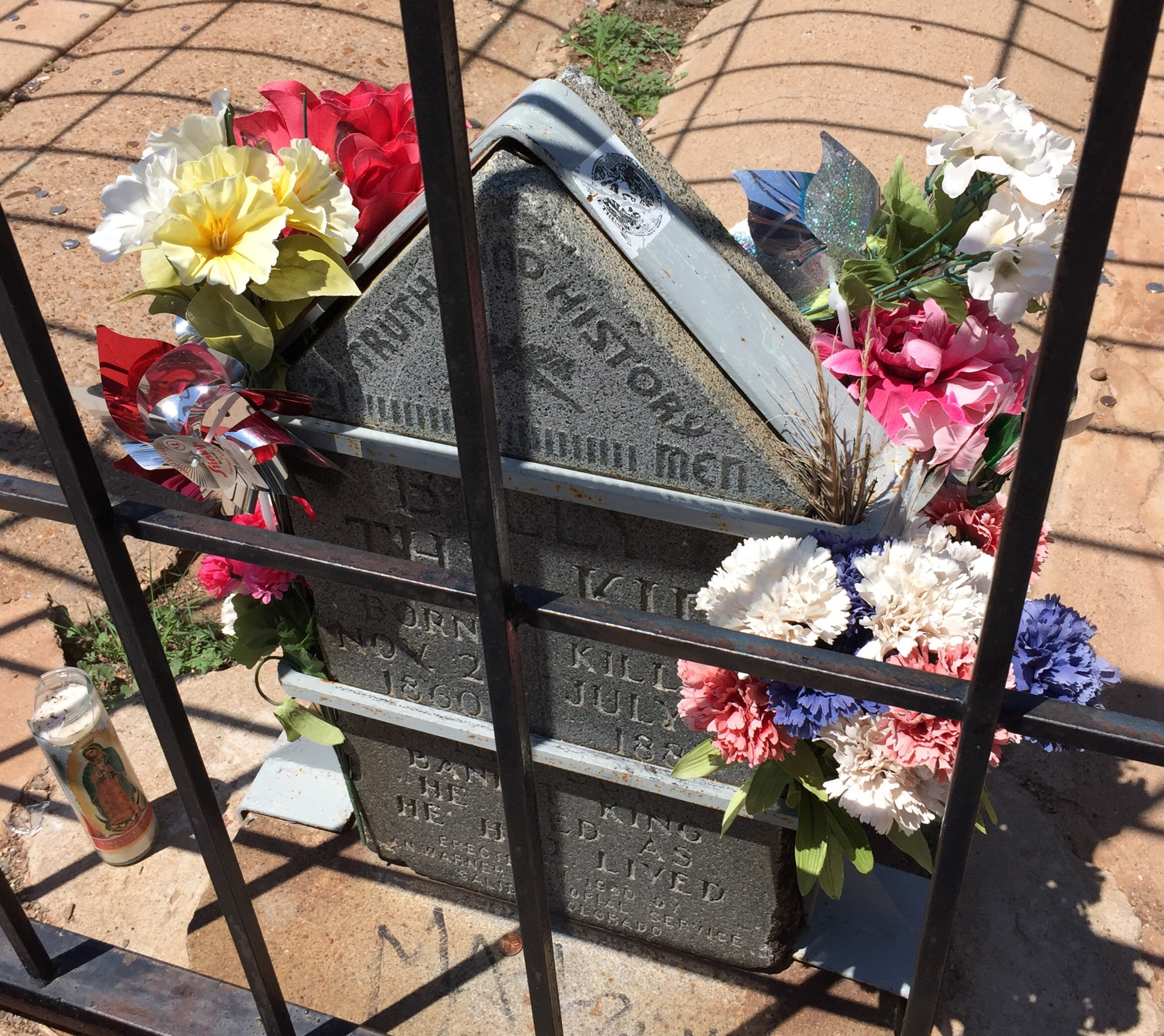 --and the grave is well protected-- 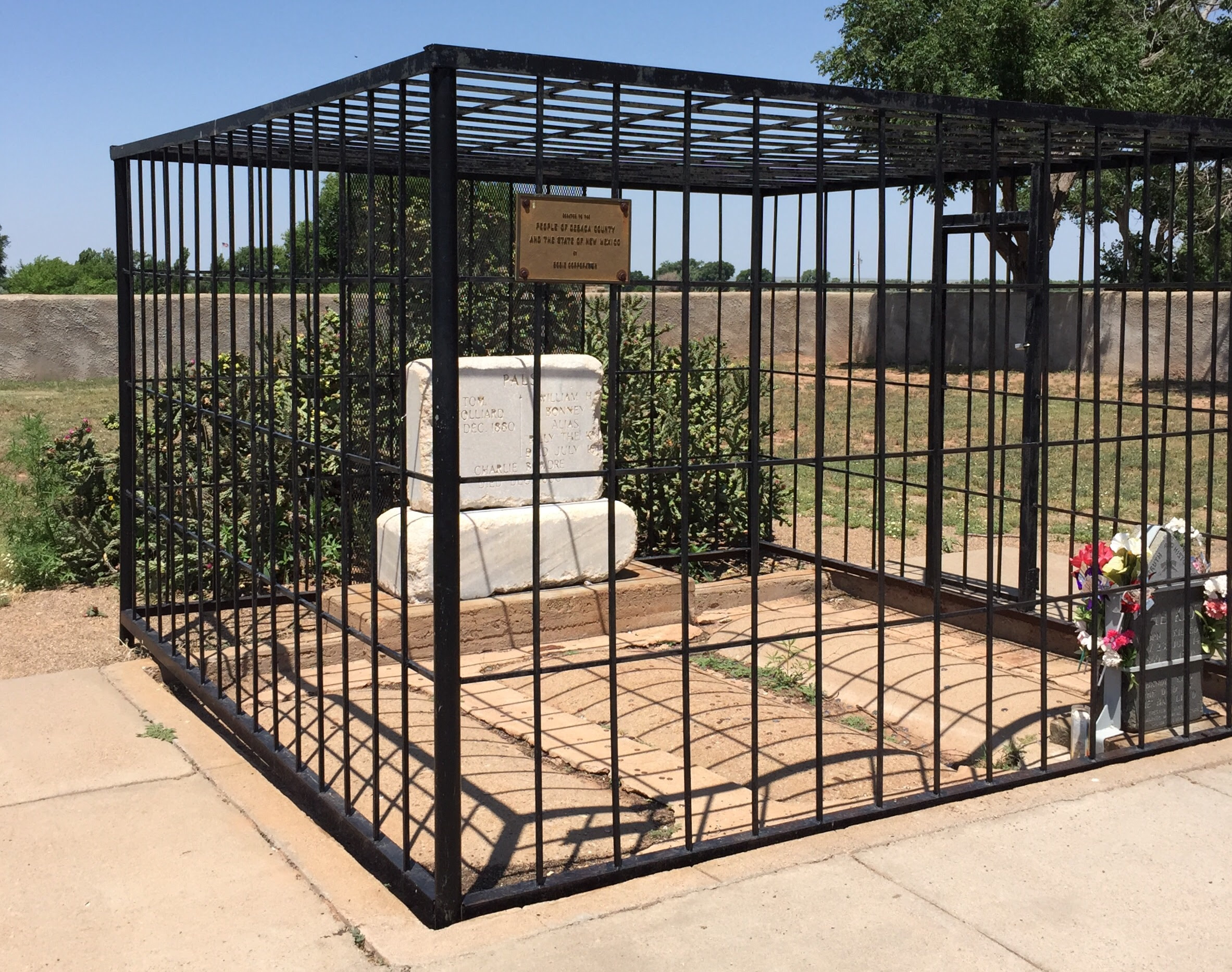 --because it has been stolen a few times, as this barely readable sign attests: 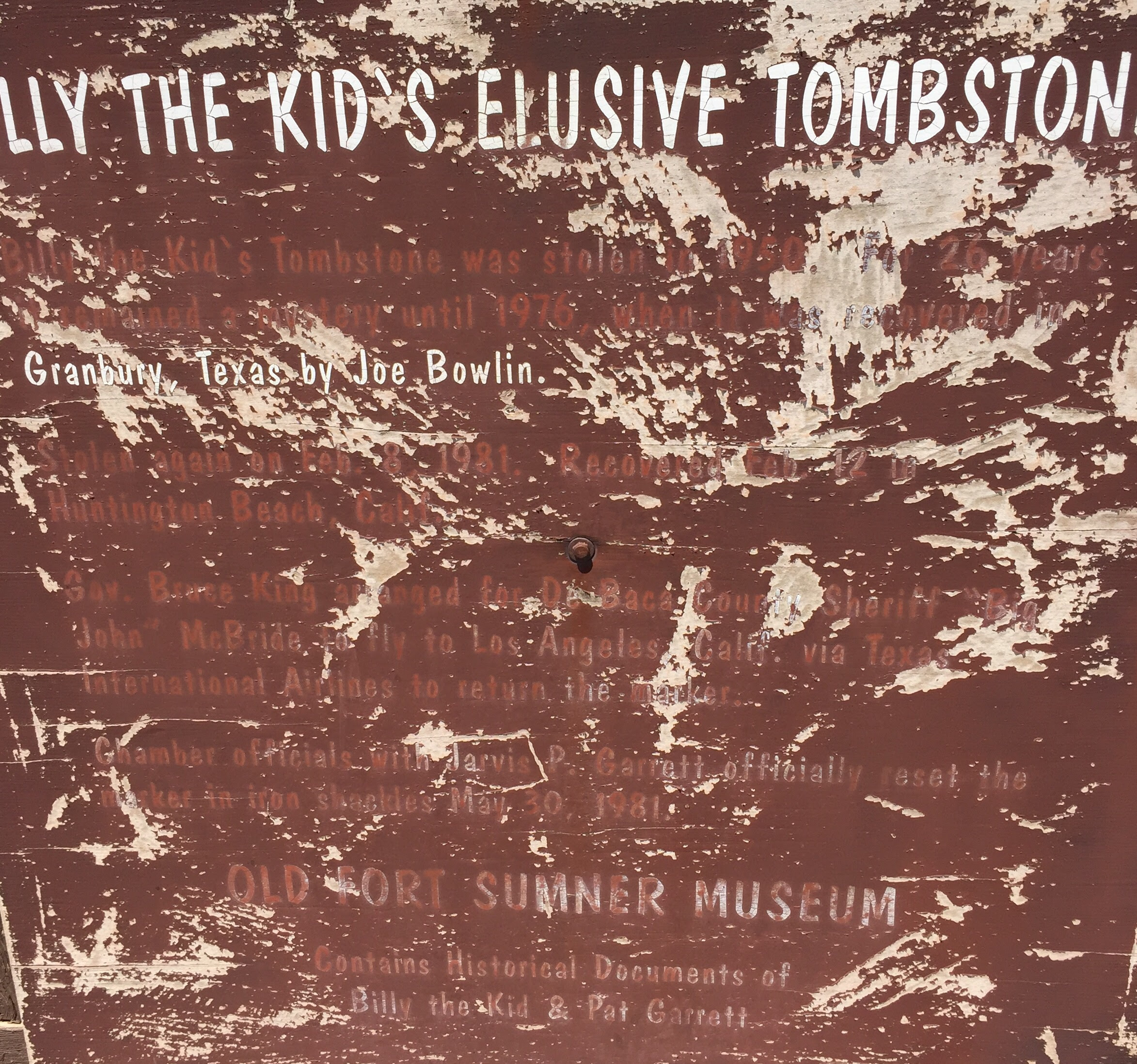 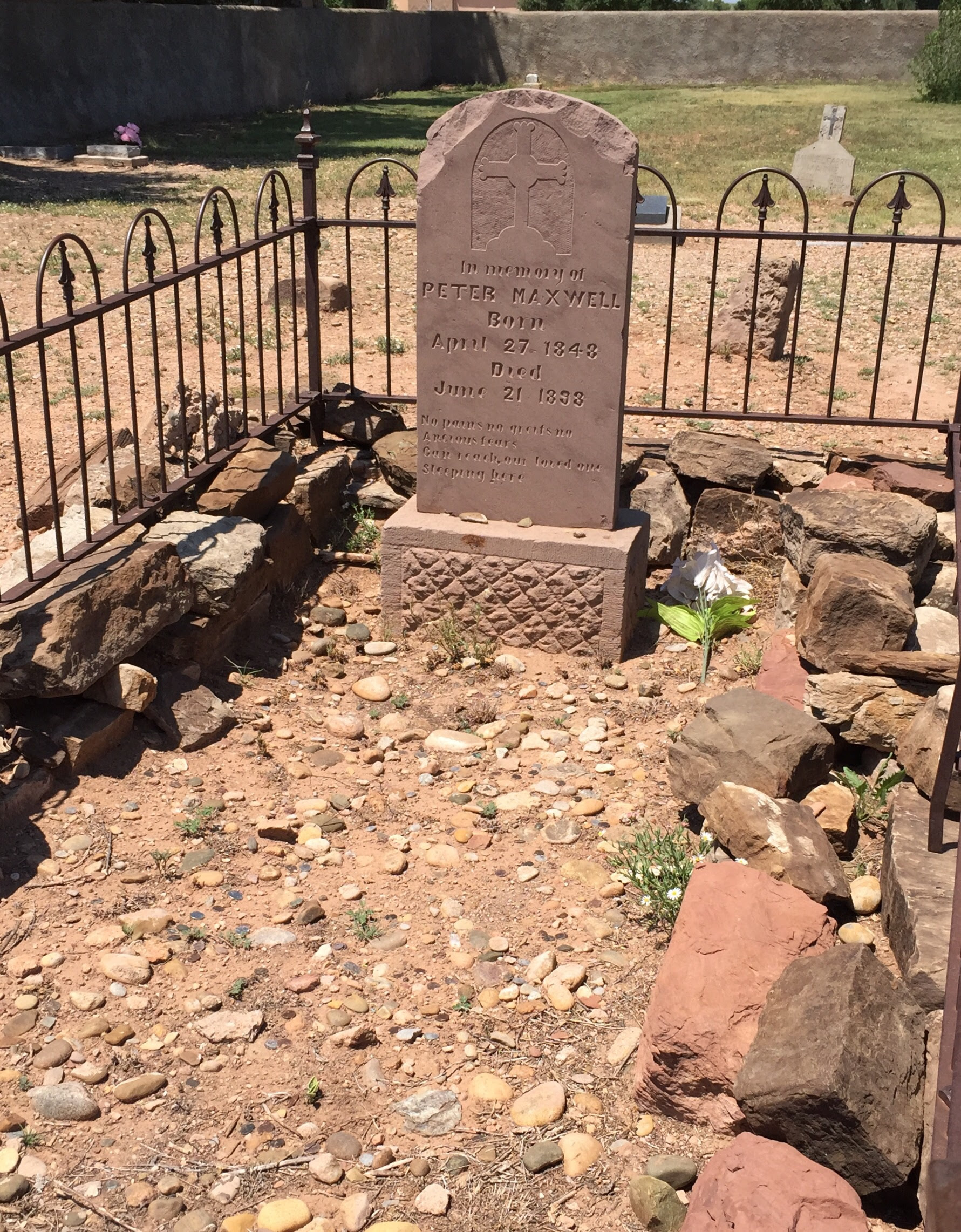 --who was either, as the Old West book tells it, just an old rancher friend of Billy's who Garrett happened to go to see while searching for Billy or, as the documentary at the museum in Fort Sumner puts it, specifically called for Garrett because he (Peter) didn't like Billy for his (Peter's) sister Paulita. Paulita was (probably) the reason Billy didn't just leave the state altogether after his escape.)

I admit I was a bit rambly yesterday, starting into a topic--whether or not Western is really a genre unto itself--too complicated for my tired mind at the end of a long day. The one benefit of the car trouble today is the movie is on when I am more awake. And, I find myself thinking about the story of Billy the Kid generally, and specifically the story of Pat Garrett and Billy the Kid. Regarding the first, why his story sticks with us, why it inspires musicians like Bob Dylan or Jon Bon Jovi (who did the soundtracks for Pat Garrett & Billy the Kid and Young Guns II, respectively), why it inspires films like these, why we can keep coming back to it anew--it's simple enough. The story of a rebel is romantic. We like the idea of this kid who stood up for his murdered friends in the Lincoln County War. Sure, he killed lawmen when he escaped jail, but by that point, it's his own life or theirs. That's an exchange we can understand. We like outlaws. We like to romanticize outlaws further by telling and retelling the tales of them. It isn't genre-specific. We've got outlaws in cop movies, mob films, you name it. We also like the idea of being able to (re)invent yourself. Henry McCarty, William Bonney, Billy the Kid. He was what he chose to be. Similarly, Pat Garrett was a bartender, a friend of Billy's, but he reinvented himself as a lawman. Billy's notion in this film that he (BIlly) was the law when he rode for Chisum is an intriguing one, especially since he later in this film shoots three of Chisum's men when he finds them whipping a man and about to rape a woman. (He's not very nice, in that he leaves the woman there alone after the man dies.) The Lincoln County War is where Billy made his name as an outlaw but he was fighting against rich men who owned a good portion of New Mexico and controlled most of what went on there and would use force to attempt control over the rest. Fighting against the Powers That Be, especially moneyed interests that wielded too much, and often deadly, power--that is heroic in an American story.

(Speaking of Chisum, I got a shot of this statue of him in Roswell: Didn't expect that to be there. Wasn't even in Roswell for Western-related stuff. But there it was.)

Bob Dylan, who here plays a character who simply calls himself Alias, was famous for making up stories about his life--just watch I'm Not Here for some examples.

My thesis, on which I start real work once I'm home this week, will deal a great deal with the idea of (re)inventing oneself, specifically through the written word. But, generally, the idea that we can choose to be who we want to be is an appealing notion. Backtracking to before the question of whether or not the Western is a genre at all rather than just a collection of settings and tropes--

Wait, is that all a genre is? We'll get to that as the month goes on, but not today.

--think about the Western like this: The Western is America reinventing itself by rewriting its own history. In these last few days, I saw a southwestern desert that includes a whole lot of green, even when it is dry, even as the year cycles into summer, but the Western almost always offers up a desert full of browns and yellows, maybe some reds in the stone. It offers up a lifeless place that we--America--conquered and turned into something better. So much of the southwest is still so empty, though. Untamed. The Western tells us that we can tame it, though. It might take men as ruthless as Pat Garrett here, or Ethan Edwards or Shane or Wyatt Earp (or any of his brothers), Doc Holliday, Wild Bill Hickock... That is also created the likes of Billy the Kid or Butch Cassidy, Sundance, Jesse James, Johnny Ringo--this just shows how truly untamed it had to have been in the first place.

Nevermind, once again, the previous occupants and their portrayal as savages, when they are portrayed at all. Winning the land from the natives, taming a desert and turning it into farmland and cities, and taking down the outlaws that sprung up along the way--that is America. That is the Western.

Hell, I guess that is the genre, but I will still come back to defining it.

For now, I am enjoying this version of Pat Garrett immensely. I cannot even remember, offhand, who played Garrett in Young Guns II [EDIT: it was William Peterson], even though I've seen that movie more times than I've ever seen this one. Emilio Estevez' version of Billy is far more... fun than Kristofferson's, though. Maybe too fun, but that's a discussion for when I watch Young Guns and Young Guns II.

Final note: Pat shooting the mirror after he shoots Billy is a little on-the-nose, but I still kinda like it.