i can find another wife easy, yes, but not a horse like that!

Let us just get right into this. We begin with Stagecoach (1939), directed by John Ford. A name we'll see again soon. We also see a bit of Monument Valley right away. That will be a familiar sight in the coming days. Same with John Wayne.

A seeming conflict is set up right away--Geronimo is going to be involved.

And, let us set up a regular commentary from Will Wright's (1975) Sixguns & Society: A Structural Study of the Western...

For most Americans, and for a large percentage of the world's population, this scene [I deliberately leave out the specific scene Wright is describing] is familiar, though few people have actually experienced it. It does not simply present a familiar setting, it envelopes the setting in social and moral meanings which are immediately understood. (p. 4)

This is our genre. Something familiar even to those who have never really seen its exemplar.

The scene literally tells a story...

(Let's ignore the abuse of literally.)

...for it recreates the setting of the American West, a time and a history which, as someone said, if it did not really happen, it should have.

Therein lies the point. The myth.

Certainly the West was wild, but even at its wildest, the actual events could not possibly have included the many stories of glory and suffering, heroism and savagery, love and sacrifice, that the Western myth has produced. Yet somehow, the historical reality of the West provided fertile soil for the growth and development of myth. The result has been one of the richest narrative traditions of modern times. (ibid)

Pretty much every one of the films I will watch for this blog this month is myth. Even the ones based on real events, real characters, a real place and time--those are mythic because of the way they are presented. It is virtually impossible to tell a factual story as a Western. The tropes and motifs take over and we get into something bigger than fact. We get into truth. We get into myth.

The distinction regarding the American Civil War--Doc Boone calling it "the War of the Rebellion" and Hatfield (I think... many characters introduced quickly and I'm not sure) calling it "the War of the Southern Confederacy"--the timing of Westerns is going to bring up the Civil War or rely on its memory quite often. Wright points out, "The crucial period of settlement in which most Westerns take place lasted only about thirty years, from 1860 to 1890" (p. 5). Stagecoach takes place in 1880. Far enough out from the Civil War that these characters might not have been personally involved but close enough to it that its reverberations are still being felt. That these disparate Stagecoach passengers are right now voting on what to do next (coupled with Doc Boone again citing the Civil War, now claiming he served in the war) suggests that the settlement of the West serves as a reconstruction of the nation through expansion. The Western then seems like a metaphor for the country's... post-pubescent growing pains.

(Movie just passed the Bechdel Test as prostitute Dallas offered her shoulder to pregnant Mrs. Mallory. I bring up the Bechdel Test because, of course, gender is going to become important in the coming month (if not in this particular film).

Function 2: "The villains do harm to the hero or to the society" (ibid). The thing here is, Ringo's father and brother are killed before the movie even begins. And, Geronimo is mostly just an idea, like a storm more than a man. There is no characterization to him. He and the Apaches are just... there, on the horizon, approaching.

Function 3: "The society is unable to punish the villains" (p. 66). Of course, with the "villains" absent but in name 45 minutes in now, yeah, there's no particular possibility, let alone a suggestion, that society can do anything about them. This far into the film, we should know what the central conflict is, or will be. But, they're trying to sober up Doc Boone. Buck's wife, who Gatewood calls "savage" is an Apache--Buck had previously called her Mexican; here, he also calls her Yakima (which is a native tribe from Washington State) even though he previously referred to her as Julietta.

Speaking of men and women, Ringo's interest in Dallas is only cinematic. There has been no real reason for him to be interested in her, and no particular reason for her to be interested in him. It just is. I would assume at this point that this is part of the myth. Man and woman coming together--that is going to be a common element here. I'd guess there is also going to be many examples of other things getting in the way of man and woman getting together... like some strained metaphor for America being unable to ever be at peace. (Or maybe just an insistence that the prostitute and the outlaw can be made honest.)

Function 4: "The hero seeks vengeance" (p. 66). Function 5: "The hero goes outside of society" (ibid). But, after Ringo proposes Dallas come live with him, and Doc Boone warns her away from Ringo, Dallas demands that he give up his vengeance against the Plumbers and run away (and she will come meet him later).

And, then the Apache come. Well, Ringo sees their "war signals"--smoke on the horizon--and doesn't run away as Dallas has implored. When the Stage Coach arrives at Lee's Ferry only to find everything burned, it's as if the Apache will never actually arrive, that they are a force of nature, part and parcel of the Wild West that these white folks are trying to tame. Sure enough, when we finally see them, it is a quick pan left from the buttes of Monument Valley; they are depicted alongside the natural rock formations. (And, we're two thirds of the way through the movie.) There's no personality to them. No individuals worth recognizing.

In fairness, the cavalry that comes to the rescue is also quite faceless. 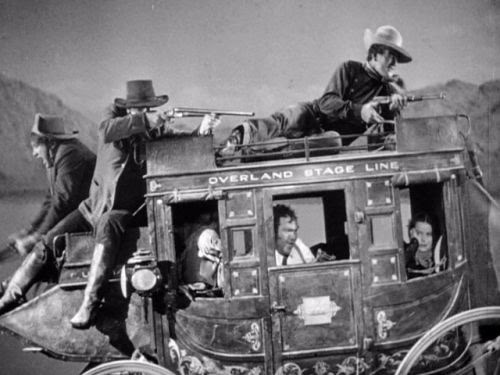 The human drama is among the action, not (other than the big climax) within it; meaning, the climax almost doesn't matter. And, by the time we get to the Ringo versus the Plumbers, that, too, is like an afterthought. And, only then do we really get to Wright's 6th (of 13) functions--"The hero is revealed to have a special ability" (p. 67)--as Ringo takes out the Plumbers with just one bullet each--he goes into the fight with only three bullets, so he has no choice but to do something special.

(A nice touch, by the way, with the bartender taking down the expensive mirror when it seems a gunfight is coming. Also the bartender giving Doc Boone a drink after he faces off with Luke Plumber.)

In the end, despite his outlaw status, Ringo is let go. Off to his ranch across the border with Dallas.

(I was thinking of watching the 1966 remake as well, but it is already after midnight... Maybe in the morning.

Meanwhile, my immediate impression of it is a rather overt change of setting. No more Monument Valley. We get mountains and forest under the opening credits. And, the Apache show up in the opening scene. They aren't given much personality, but this makes them less of a... supernatural menace and more just stereotypical bad guys.

Once we get to the characters, it sounds like they took the exact same script and ran with it. Seems kinda pointless...

And, I really should go to bed. I think I'm just waiting to see this version's Ringo, just in case I don't feel like watching it in the morning.