your duty is to the people, not your own pride

I really should just be doing multiple entries rather than these extra long double movie ones. But I like them being numbered nicely. Today: The Searchers and Gunfight at the O.K. Corral. 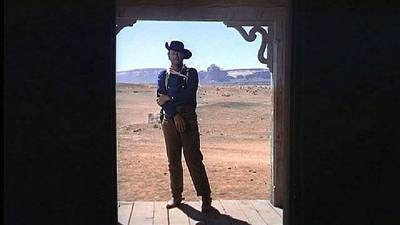 The opening of The Searchers offers us one of the structural oppositions that Henderson (1985) and Wright (1975) discuss--wilderness/civilization. Also inside/outside society. The door opens to the outside wilderness and Ethan (John Wayne) arrives, not unlike Shane yesterday. Henderson's focus is this very film and he offers up an important summary of one of the major themes:

The Searchers is explicitly concerned with a number of anthropological issues. On its surface it treats questions of kinship, race, marriage, and the relations between tribes. These questions also have to do with the identity, status, and responsibilities of individuals: who is responsible for the retrieval and burial of the dead, for the search and recovery of captives, for vengeance? Who can marry whom? Which marriages are binding? Which are not? (p. 434).

Wright, of course, puts The Searchers as a vengeance plot. But kinship is worth discussing first. Martin, who is part Cherokee, was rescued from an Indian raid by Ethan. Since then he has been adopted by Ethan's brother's family. He even calls Ethan Uncle Ethan almost immediately.

These two men are kin by adoption and circumstance, not by blood. Martin is part Indian but lives with the Edwards family. Ethan is, of course, white, but has been gone for a long time; after the Civil War ended, he went and fought in the Franco-Mexican War. He is not part of this society anymore. So we've got a binary opposition between Ethan and Martin. As the story goes on, we will find another binary between Martin and Debbie; Martin lost his parents when he was a boy (to be fair, Martin is only part Cherokee, but Henderson argues that Martin "functions as an Indian in the symbolics of the film" [p. 434]) and was adopted by the Edwards family. Debbie loses her parents as a girl and is "adopted" by the Comanche. I put the latter adopted in quotation marks because, while Debbie has accepted her new place, Ethan (and the film) does not accept it. As Henderson puts it, "Indian law and adoption, intermarriage on Indian terms re not recognized by the white settlers or by the film that takes their part; only white law and adoption and intermarriage on white terms are recognized" (p. 435). The film won't let Debbie make that choice.

I like this film. So, I got to just sitting here without any typing and then reading a Slate piece in which Stephen Metcalf (2006) describes The Searchers as bbeing "preposterous in its plotting, spasmodic in its pacing, unfunny in its hijinks, bipolar in its politics, alternately sodden and convulsive in its acting, not to mention boring." He goes on to argue that this film is only considered important because it happened to be timed right with the beginning of film studies "and the first generation of filmmakers... whose careers began in film school." The thing is, Metcalf calls the film "visually magnificent [but] otherwise off-putting to the contemporary sensibility, what with its when men were men, and women were hysterics mythos and an acting style that often appears frozen in tintype." It's like he doesn't understand that this film was made in 1956. You cannot really go into a movie like this with (nothing but) modern sensibilities.

For instance, Henderson (1985) argues, "In Propp and Greimas, [Debbie] is the object of value transferred from the good kingdom to the evil kingdom and back, over whom hero and villain fight to the death" (p. 435). Assume Debbie fills this role, this doesn't mean that John Ford meant for this film to tell us that women are just objects. Even the damaged women that Ethan insists are no longer "white" suggest more about Ethan as a character than about the film or what we are supposed to take from it. Content and message are not always one and the same. That Ethan ultimately chooses not to kill the contaminated Debbie suggests, rather, that the film wants us to believe Ethan was wrong in his intentions (and presumably in his racism). (Eckstein (1998) argues that director John Ford deliberately made Ethan darker than his original in the novel on which the film is based. And, not to promote Ethan and his racism but perhaps the opposite. Eckstein argues that altering Amos Edwards' urge to rescue his niece Debbie was turned into Ethan Edwards wanting to kill her not because of "John Ford's complicity in white racism but rather the opposite, his first thoroughgoing attack on it, a theme to which he would return--more and more explicitly--during his last decade of filmmaking" [p. 7].) Martin's loyalty proves Ethan wrong about Indians along the way, whether or not Ethan wants to acknowledge it.

As for Ethan's motives, we don't know where they come from, though we do know what they are. Henderson suggests that the film offers too many motives throughout, and the only "conspicuously unmotivated act" is Debbie's choice to leaving with Ethan and Martin. Since Henderson references Propp, I turn to Propp myself. Ostensibly, I'm looking for that "object of value." I find numerous references to the "object of the quest" or "object of the search" but not this "object of value." (Maybe it's in there, but a quick thumbing through and I'm not seeing it.) But I find something that explains why Debbie might change her mind so quickly--or, alternatively, why Ethan would choose not to kill her. Propp's function XIX deals in the object. The 8th sub-function is as follows: "The spell on a person is broken" (p. 55). Whether that person is Debbie (under the spell of the Comanche) or more likely Ethan (under the spell of vengeance), I might argue--I won't do it too definitively because I have not read Propp extensively)--that this moment is about the spell being broken more than any object of value being won back from the evil kingdom.

Today I went to the Autry Museum which isn't far from our apartment. Got a few photos which I may share here and there in the coming days. For example: It had been a while since I'd been to the Autry and they've gotten rid of a nice lifesize diorama of the Tombstone gunfight that they used to have. I wanted to get some photos of that...

Anyway, time for Gunfight at the O.K. Corral. 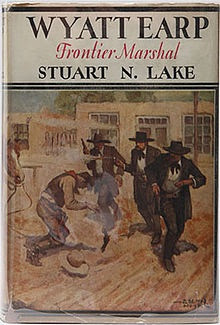 I find it interesting that until this film, public opinion on the titular gunfight--

(for those who knew anything about it; the American public really didn't know much until Stuart Lake published Wyatt Earp: Frontier Marshal in 1931. Prior to that, Ashford (1994) explains, Earp was a "nonentity" ... "There had been no Wild West Shows, no dime novels, no popular melodramas" about Earp.)

--was that the Earps were at fault, practically, if not legally. With numerous news reports of police officers killing unarmed individuals in this country--nearly 400 so far this year, and the year isn't half over--I'm inclined to research the details of the gunfight... that there were conflicting accounts from eyewitnesses loyal to one side or the other suggests things were clearly not cut and dried.

This further inclines me toward a political rant for which I'm not in the mood. Instead, I'm intrigued by yet another version of Johnny Ringo. Plus, we've got the Earps and Doc Holliday and the various "Cowboys" beside Ringo--Ike and Billy Clanton, Frank and Tom McLowery (real spelling McLaury). Real life Western characters. Ashford (1994) argues that, with the publication of Lake's biography of Wyatt Earp, "here was an idol for every red-blooded American boy to look up to and to emulate. Here was a true American hero." (I neglected today to get photos of the Wyatt Earp-related toys they had on display at the Autry, unfortunately.) Ashford explains further:

Lake had created an archetypal figure: a paragon of gunfighting virtue, a paladin of the frontier, a man who had devoted his life to bring law and order to the Wild West. It was a character tailor-made for the screen and Lake lost little time in cashing in on that potential.

At least five films would be based on his version of Wyatt Earp by 1940, and Lake would be responsible for the television series The Life and Legend of Wyatt Earp. Lake had taken the best parts of a real story and invented plenty of others and had created an indelible character that would keep being in movies for decades. The reality barely mattered anymore. The character was bigger. The myth had outgrown the facts.

For example, in this film, James Earp's murder is fuel for Wyatt deciding to finally fight it out with the Cowboys. But, James Earp lived until 1926. (And, he wasn't involved in the gunfight, either. Which, I guess, this movie accidentally gets right.) 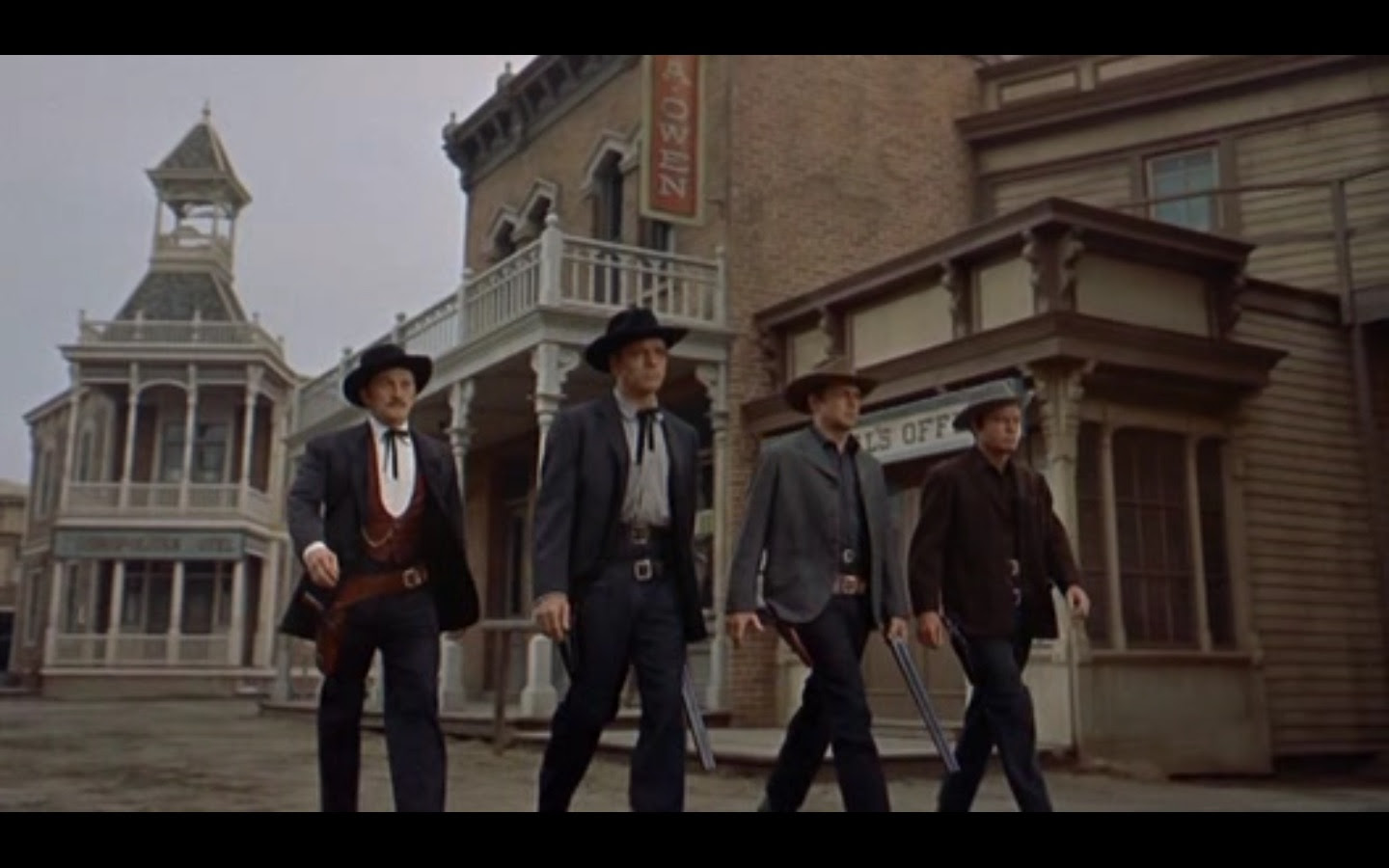 Ashford, D. (1994, September 3). FILM: First action hero: Wyatt Earp was n elderly movie groupie who failed to make it as an extra; then Stuart N Lake wrote his spurious biography, and the star-spangled hero of the O K Corral was born. As two new films strip the myth to its bones, David Ashford charts the making of a Hollywood cowboy. The Independent. Retrieved from https://web.archive.org/web/20121110102738/http://www.independent.co.uk/arts-entertainment/film--first-action-hero-wyatt-earp-was-an-elderly-movie-groupie-who-failed-to-make-it-as-an-extra-then-stuart-n-lake-wrote-his-spurious-biography-and-the-starspangled-hero-of-the-o-k-corral-was-born-as-two-new-films-strip-the-myth-to-its-bones-david-ashford-charts-the-making-of-a-hollywood-cowboy-1446479.html

Metcalf, S. (2006, July 6). The Worst Best Movie: Why on earth did The Searchers get canonized? Slate. Retrieved from http://www.slate.com/articles/arts/the_dilettante/2006/07/the_worst_best_movie.html