and hell's coming with me 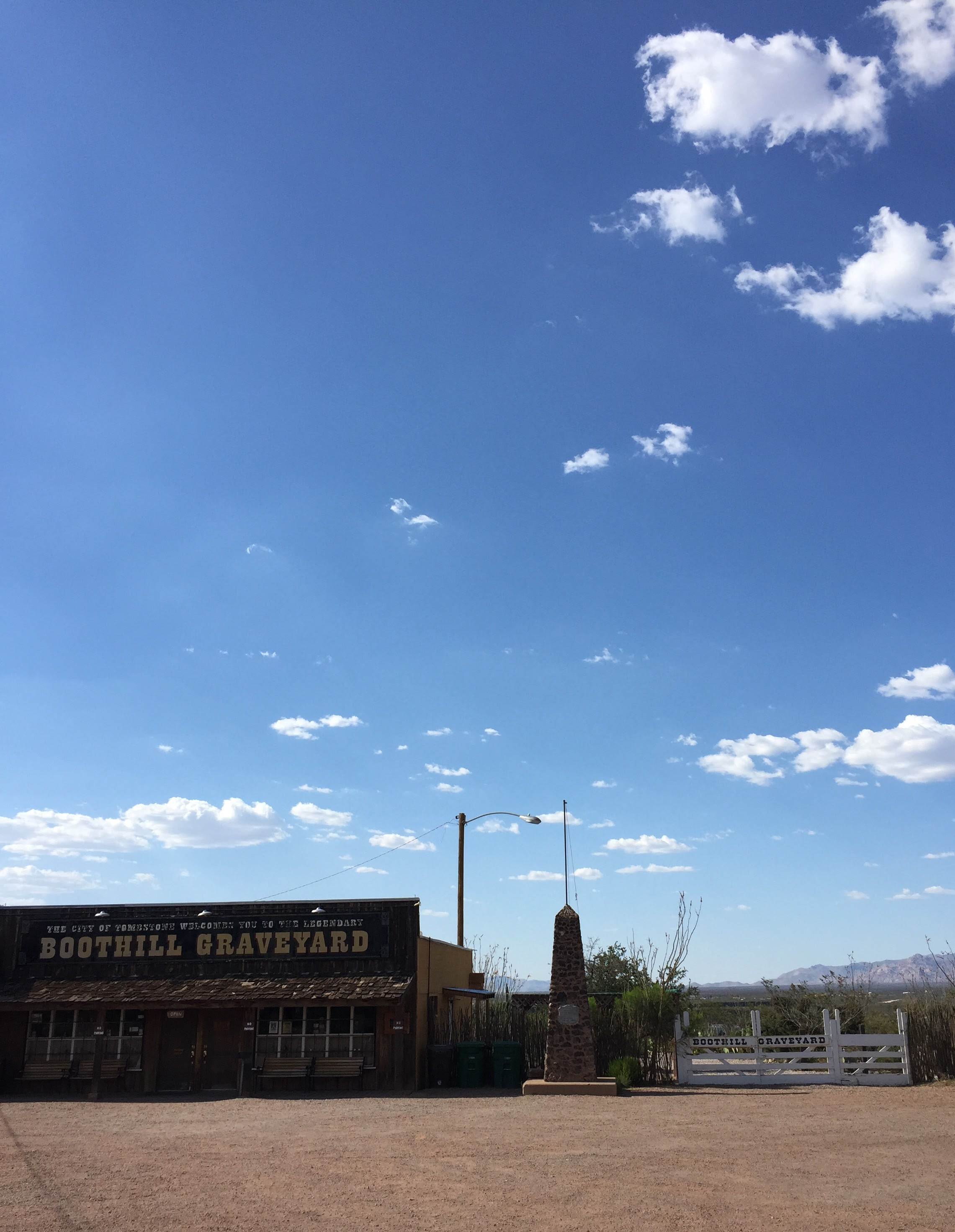 I lament the fact that we arrived in Tombstone too late last week to get into a few of the places. But, driving into town, we saw Boothill Cemetery first. The gift shop/entrance had this on the door: 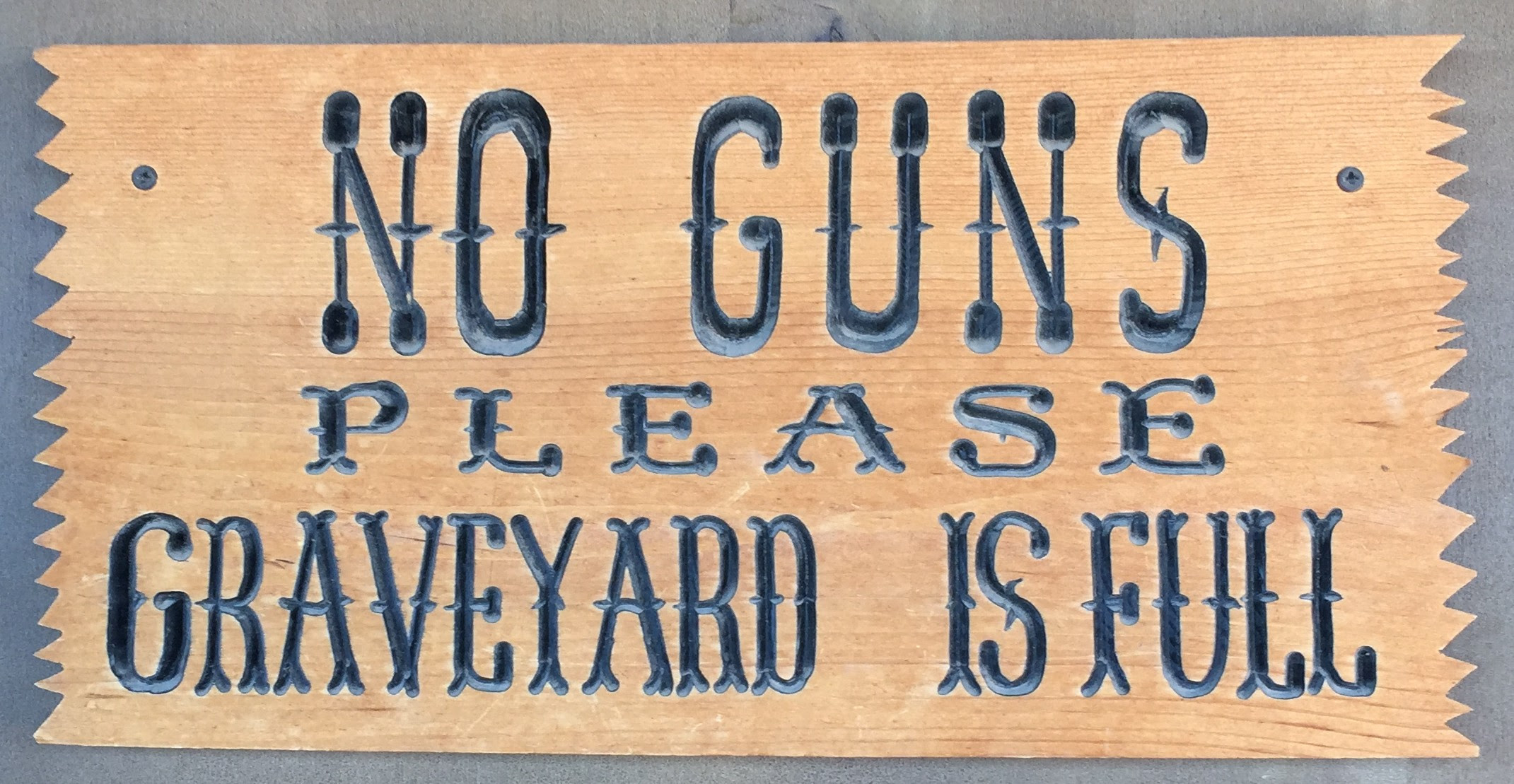 Doc Holiiday (Val Kilmer) didn’t need his guns just now to kill a man, of course, in Tombstone. Set his guns on the table and stabbed the guy instead. Sure enough, Holliday was a bit of a killer and not a particularly nice guy.

Some graves, starting with the Cowboys killed at the “Gunfight at the O.K Corral”: 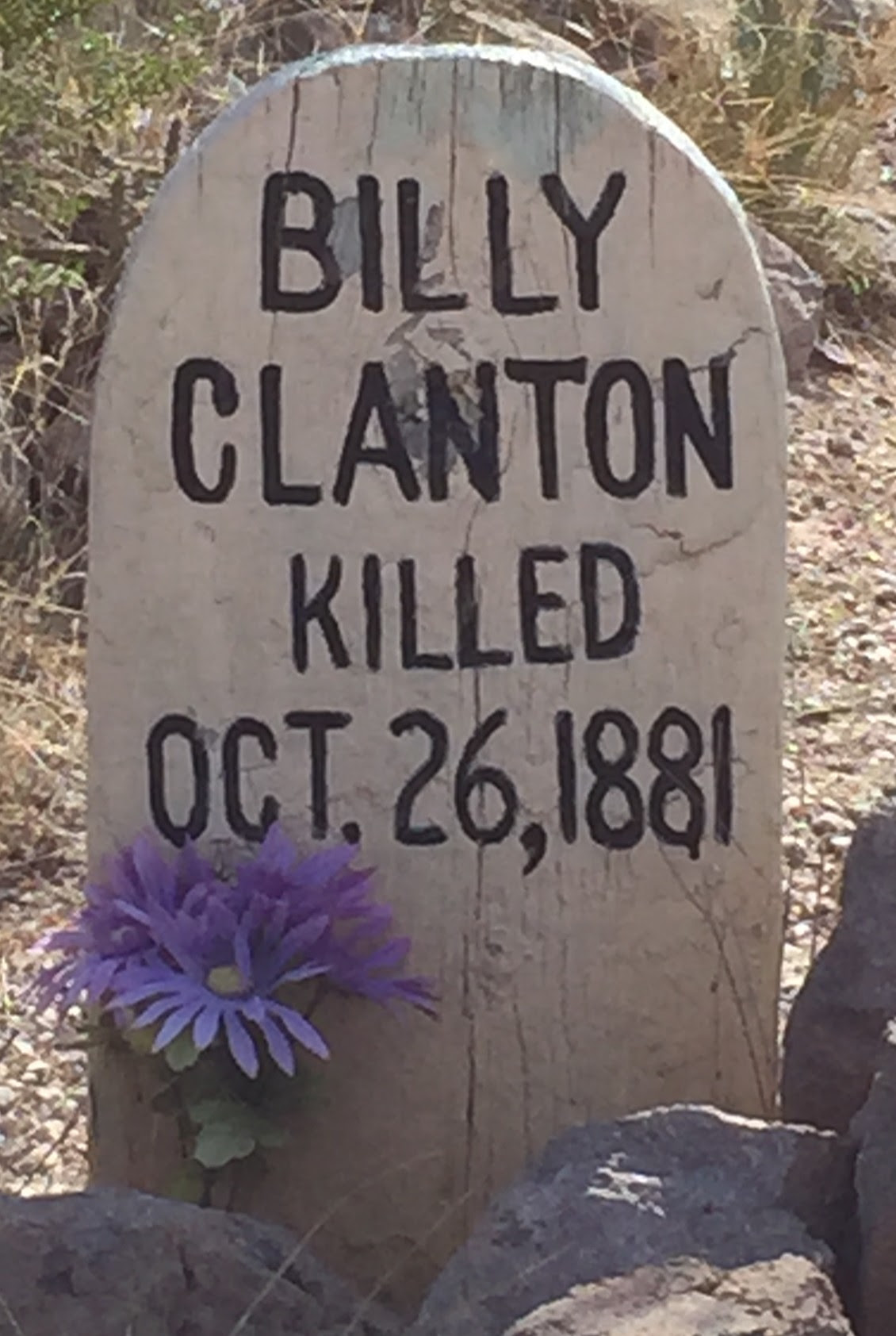 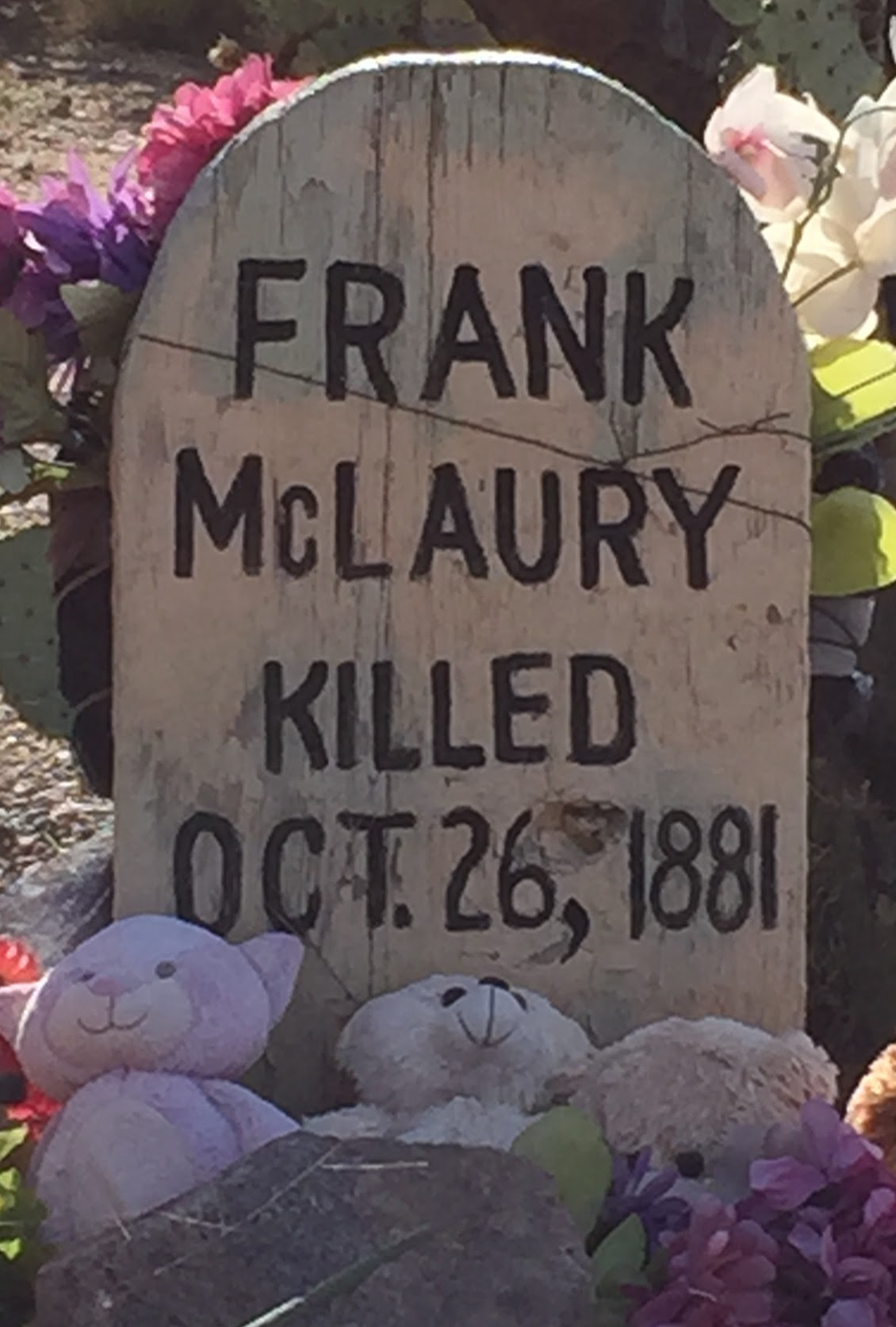 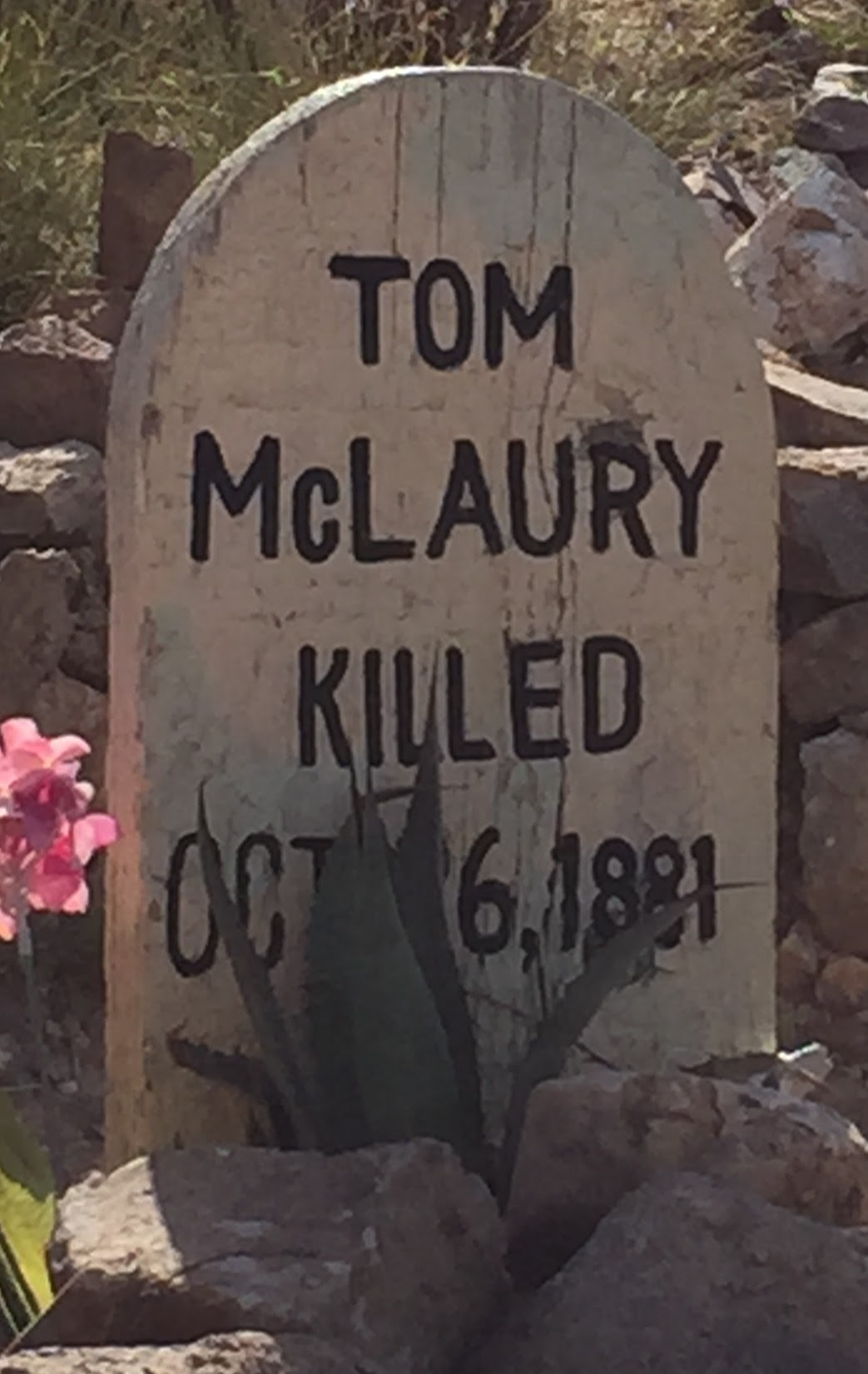 And, this marker which could fit right in outside the Haunted Mansion at Disneyland: 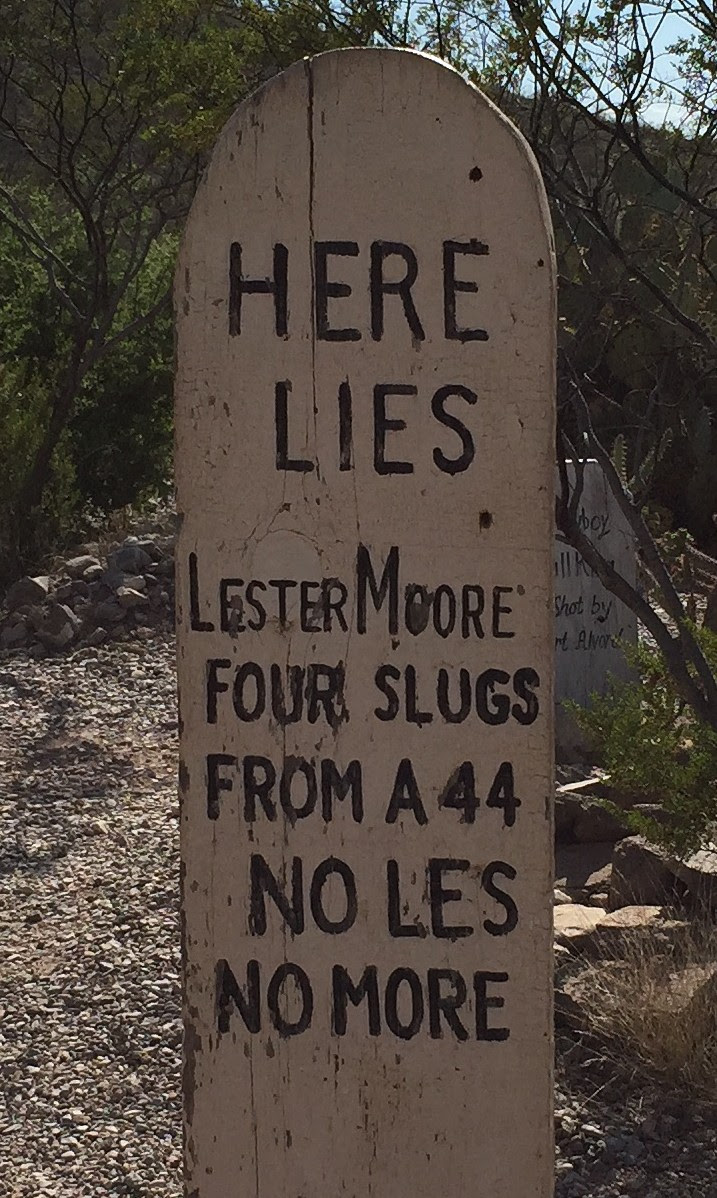 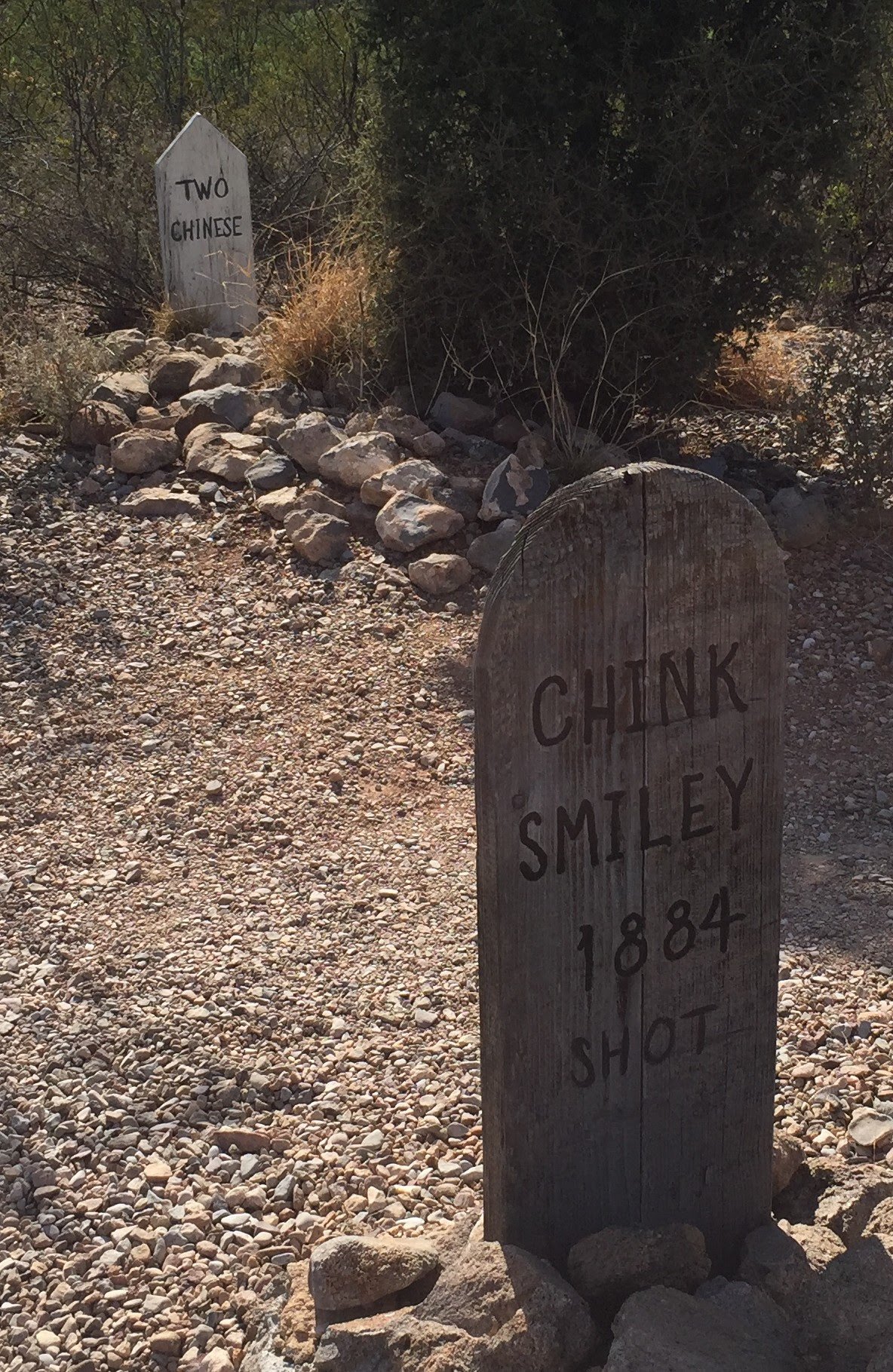 Two gift shops—and a shot glass for my collection 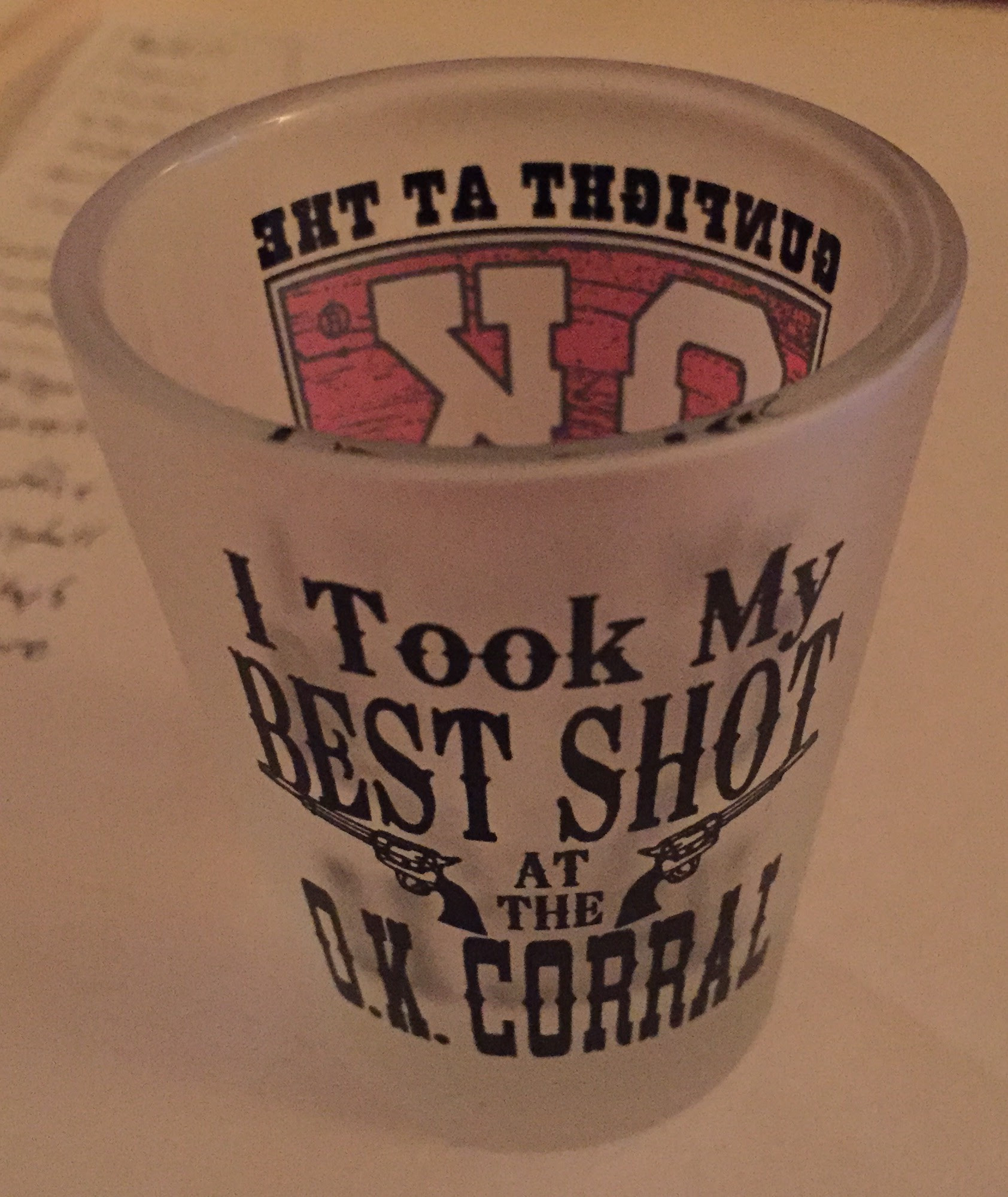 later and we drove into the town proper, parked about 20 yards from this: 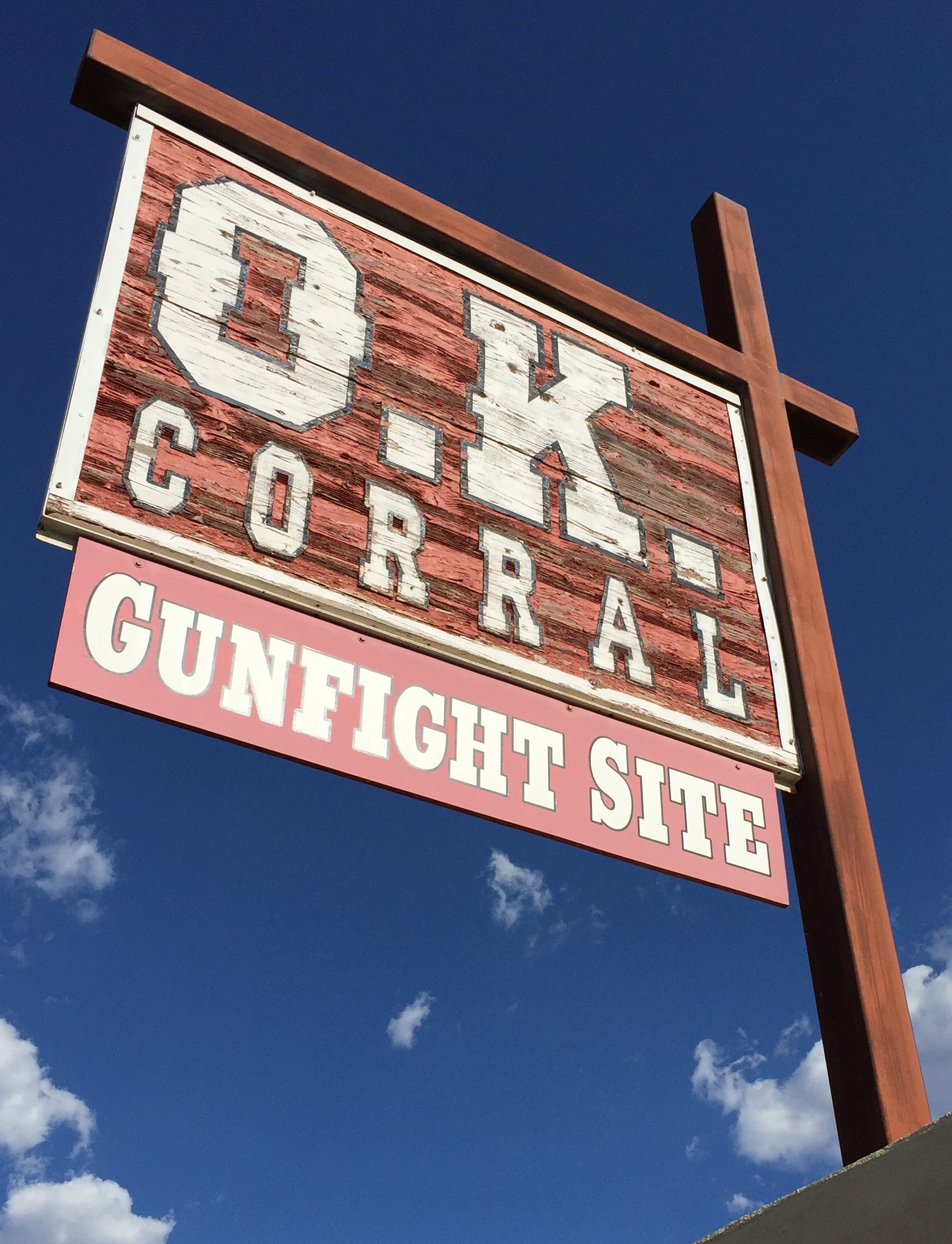 For the record, once again, the gunfight did not happen at the Corral but a good distance off, next to Fly’s Photographic Studio. right about where I was standing when I took these pictures: first, on fremont looking east, the porch at the right edge here is Fly’s. 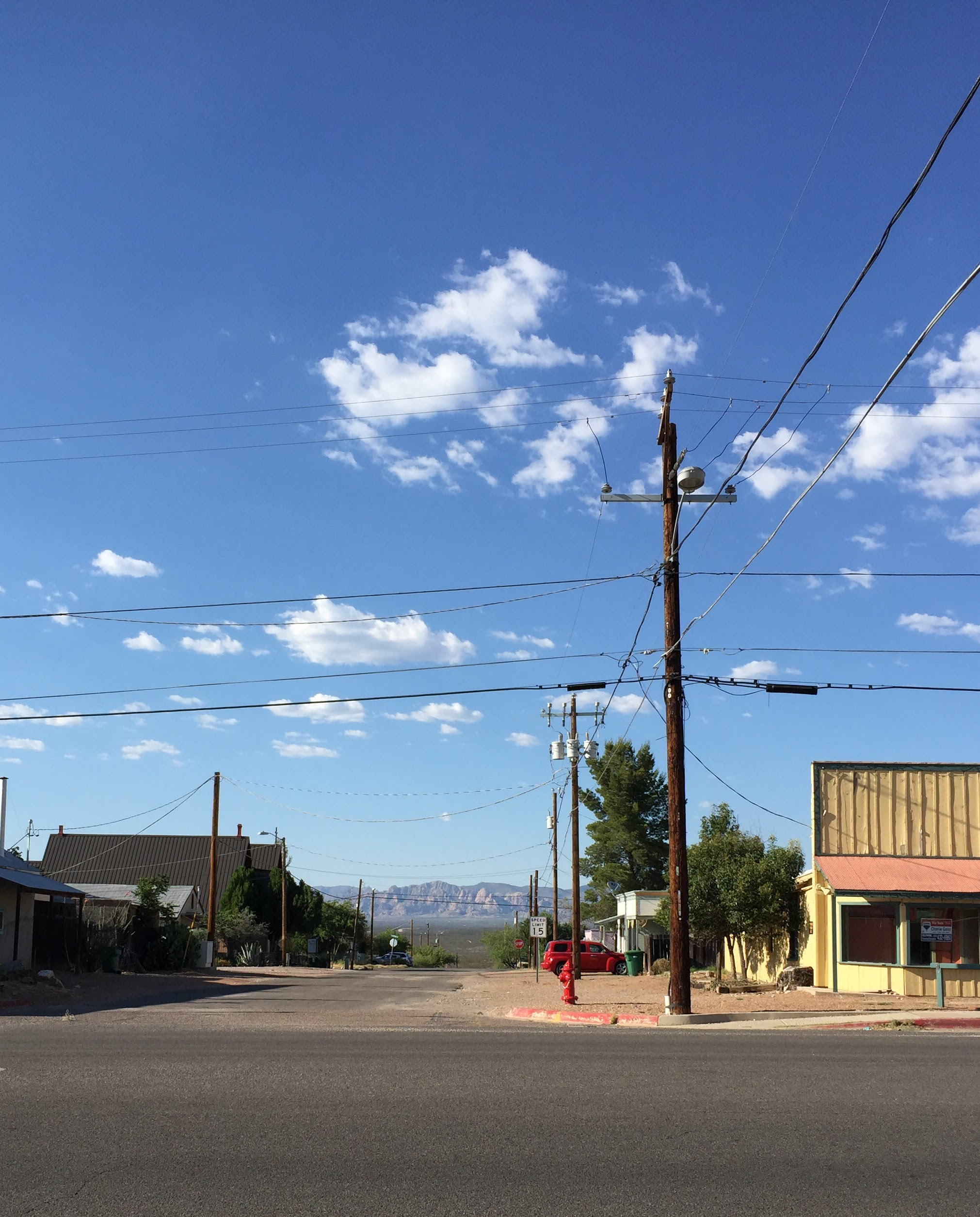 I love how this version of Wyatt Earp (Kurt Russell) is like a barely contained ball of rage, so much so that it’s hard to believe he’s the good guy. As we’ve already seen in Gunfight at the O.K Corral, the Earp’s probably fueled more of the violence in Tombstone than the Cowboys did. Or, at least, they welcomed it.

The standoff at the casino (or whatever place that is; I’m actually not sure offhand which place the Earps took over when they moved into Tombstone... the Oriental?) with Ringo (Michael Biehn)—and this has got to be the fifth or sixth (or more?) Western we’ve seen Ringo in this month—and his gun and Holliday and his cup is awesome; it sets up the feud without any violence at all.

That location—and the pool hall—seem a little big for the town as it is... So much in that town seems quite small, narrow at least. Also I just noticed that the movie’s Bird Cage Theatre is angled toward the intersection. The real one is not. 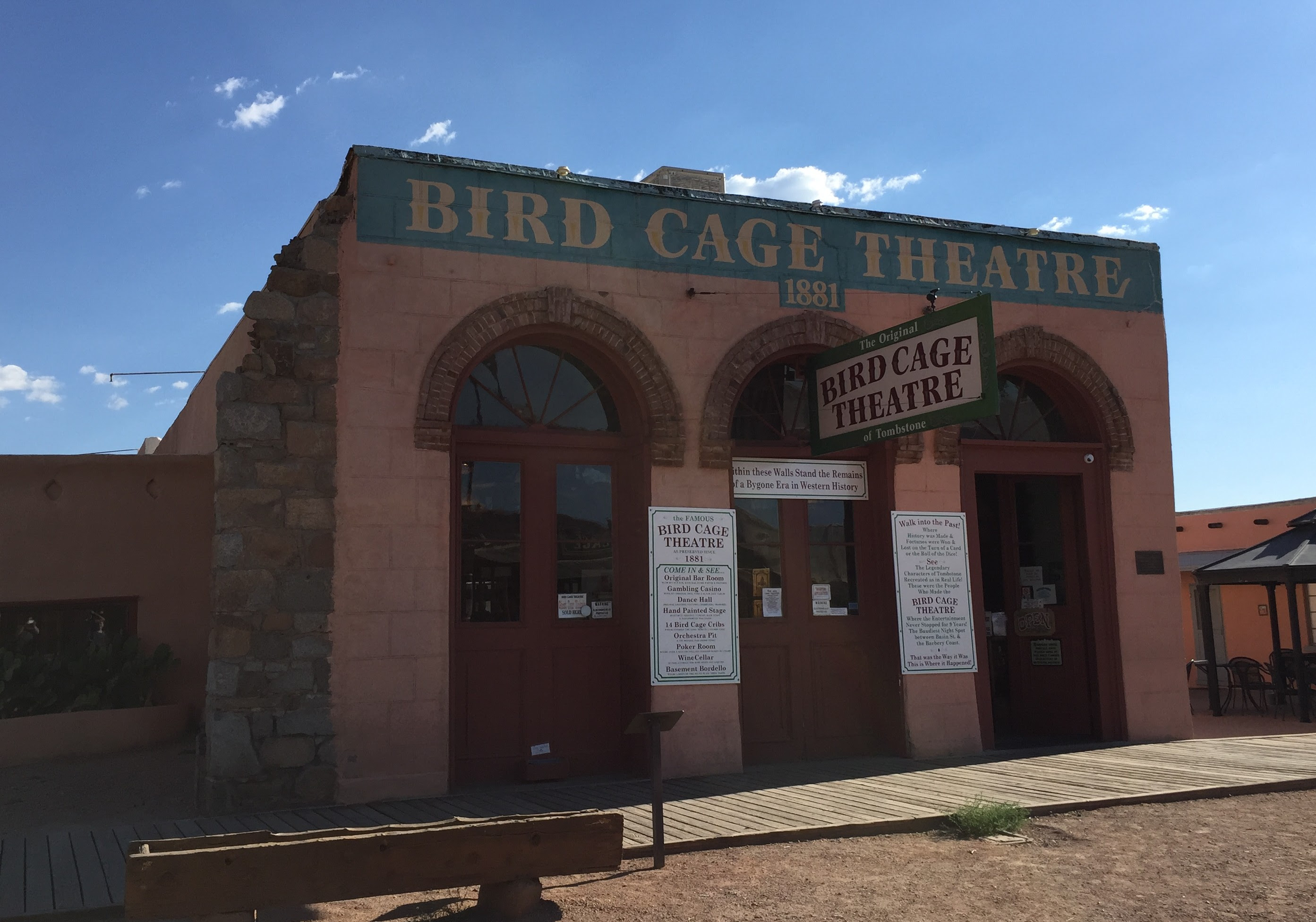 The infamous gunfight only took about 30 seconds, but the Time-Life Old West book on gunfighters takes a few pages to describe it, and ends with this:

The gunfight was over. Of the eight participants, three men were dead, three were wounded and two—Ike Clanton and Wyatt Earp—were without a scratch. In less time than it took a minute hand to go round the clock, enmities had been resolved by a ritual obligatory for its proud performers. Yet, inevitably, a further reckoning was to come. (p. 33)

Of all the Western towns that existed in the real world, Tombstone was probably the one closest to what we see in film after film (and not just those about Tombstone), a place in which violence was somewhat common, and gunfights did happen in the street often enough to seem normal. Magistrate Court Judge Wells Spicer had this to say about the gunfight (and its locale):

When we consider the condition of affairs incidental to a frontier country, the lawlessness and disregard for human life; the existence of a law-defying element in our midst; the fear and feeling of insecurity that has existed; the supposed prevalence of bad, desperate and reckless men who have been a terror to the country, and kept away capital and enterprise, and considering the many threats that have been made against the Earps, I can attach no criminality to [Virgil Earp’s] unwise act. (ibid, pp. 33-34)

Trachtman (the author of that Old West text, argues, “As much as any other shoot-out, the drama at the O.K. Corral secured the reputation of the Western gunfighters as figures of elemental force, rough-hewn knights whose daring—if not their virtue—was beyond question” (p. 34). I’ll give him the “elemental force” bit; that was my entire argument about the fictional William Munny yesterday. But, the comparison with knights invites a strange comparison. In film and in story, knights are noble, good. But, knights were on the side of the nobles, not peasants. Knights were often caught up in petty squabbles between nobles when there weren’t real wars going on. I imagine them much like the gunfighters of American myth. Sure, they’re special, sure they’re good at what they do. But, that doesn’t mean they’re good. That doesn’t mean that when they go into the street and shoot a man it is justified.

I figure we can blame the Western myth, and the whole idea of the gunfighter, for every time we’ve got police officers gunning down (supposedly) suspicious individuals (seemingly) without cause. Just last week after the shooting in Charleston, there were more than a few people—and a couple politicians—saying that what we needed in that Church was a good man with a gun. We Americans just love the idea of a good man with a gun. (This film was directed by George P. Cosmatos, after all, director of Rambo: First Blood Part II.) We just accept that violence will happen and we build our stories (and some of our politics) on the idea that in that violence there will be a good man and he will do good in doing violence. Warlock explicitly, and Gunfight at the O.K. Corral and Tombstone, if you look beyond face value, question the truth of this position; this violence is not a good in and of itself. The men who win the gunfight over the bad men are not inherently, or definitively good, simply by virtue of fighting bad. Doc Holliday, here, for example, is far more of a killer than just about any of the Cowboys or the Earps. Plus, he was a criminal, (probably) a stagecoach robber, and definitely a murderer. Here we have a Holliday who enjoys it and we love the character. The friendship between Holliday and Wyatt Earp forms the heart of this film and we eat it up. If these men can love one another and respect one another, and they beat the bad guys in a nice (and probably historically inaccurate) montage, then we applaud and enjoy the show. But, all we are doing, in the end, is cheering on frontier justice and the idea that a man with a badge is implicitly good, implicitly right, no matter what he does. is a statue of Wyatt Earp. He isn’t shooting anyone, but he has his rifle ready, and his coat suggests motion, action. This is a man ready for a fight. And we love it. 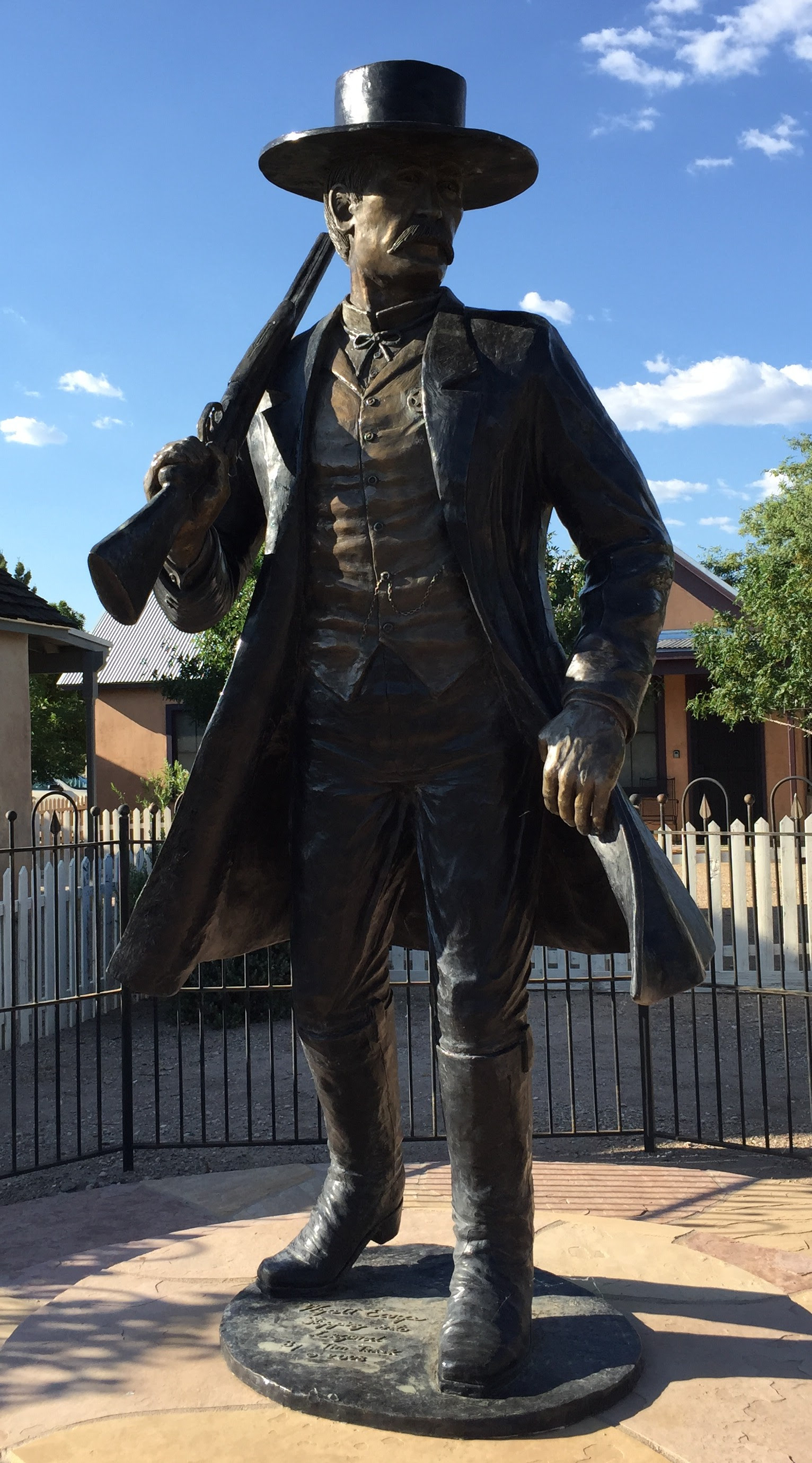