no women in quick draw

(As this month of Westerns winds down, it comes in handy that I've got a few extra films on my list. Turns out I forgot to find a copy of Wild Bill to borrow, it's not on Netfllix or Hulu, and there isn't even a good torrent of it available. So, the choice was watch it through iTunes and be stuck with a small screen or skip on past it. So, skip on past it, it is.

The Quick and the Dead boils a whole lot of Western tropes into the gunfight. the standoff in the street. Here, it's an organized contest, with a handful of stars, a few of which have been in Westerns before. The throughline is a vengeance plot, but with the elements out of order, saving explanations for flashback as The Lady (Sharon Stone) joins an otherwise all-male shoutout contest and immediately wants to challenge the big man in the town of Redemption, John Herod (Gene Hackman) to a fight. But, the setup is a bunch of duels.

The direction is fun, Sam Raimi's usual moving camera and angled shots combined with some extreme closeups that, come to think of it may have already been a staple of Raimi's style but here seems to echo Sergio Leone. (Maybe that's just where Raimi got it.)

The title, of course, is a reference to I Peter 4:5: "Who shall give account to him that is ready to judge the quick and the dead." Except, the "quick" there literally refers to the living, but the film relies on the play on words--for a gunfighter is either fast or he is dead. Plus, Herod specifically claims that he decides who lives and who dies in Redemption 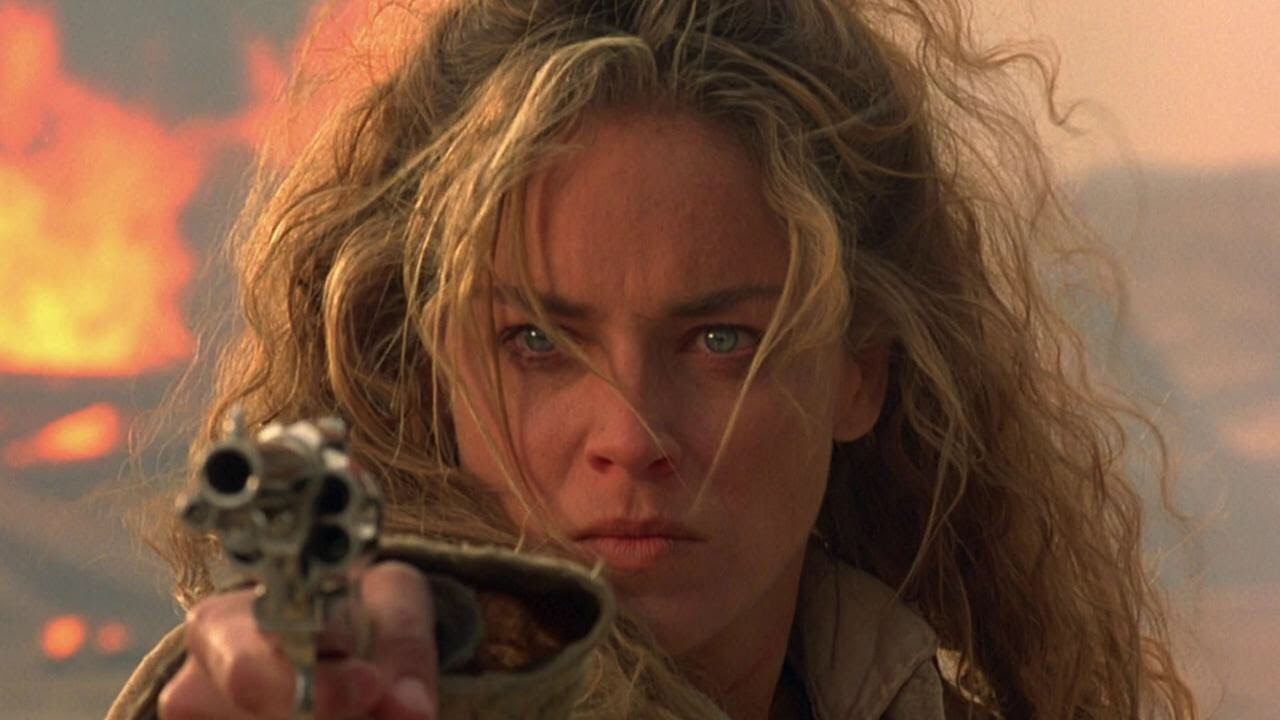 Before I get into whether or not this film is feminist--another possible film for today was Bad Girls, by the way--I wanted to lament one aspect of the production. Apparently, John Sayles was commissioned for rewrites, and put together what would have been well 2 1/2 hours of classic American Western. Sayle's Lone Star and Limbo are two of my favorite films, so I wish I could see that film, Sayle's writing with Raimi's direction... That would be amazing. But, most of Sayle's work was supposedly cut right back out by the original author of this script, Simon Moore. I would be interested in seeing the script before Sayles' work was pulled back.

Now, the meat of the discussion. Is this film feminist. Here's the thing--just putting a woman in a role that could otherwise be a man isn't necessarily feminist. But, when it comes to American cinema, there is a certain inherent feminism in simply having your lead be female (unless the film is a "chick flick" of course; there, it's expected). Our default is so stuck on men doing everything that it doesn't take much to be feminist. The Western has proven this month to be very male-centric, often excluding women almost entirely. It has rarely been particularly anti-woman, though. I suppose we're just too lazy for that. Easier just to leave the women out or on the sidelines than suggest too explicitly that they're inferior. We just make them de facto inferior by making them unimportant.

Then, we cheer on the likes of The Lady here--those of us who went to see it, anyway; it didn't do well at the box office (though, it was actually #2 behind Billy Madison it's opening weekend)--just like we cheer Cort (Russell Crowe) turning from a preacher who has disavowed the gun (back) into a killing machine. We're hypocrites...

Or maybe we just like seeing people shoot each other, no matter who it is. Maybe that is why the Western has tended to be successful as a genre; more than a lot of other genres (or settings) it allows for a whole lot of guns and gunshots. We Americans do so love our guns. First Amendment gets us film, Second Amendment gives film something to titillate us. We might like the occasional drama, and plenty of stupid comedy (and on rare occasion intelligent comedy), but give us action, give us guns and we will flock to the movie theater. Put a woman at the center of the film and, well, she better be hot, and better show some skin. Because, well, we're sexist assholes, too. She can have the starring role, just as long as a) she's attractive and b) she can shoot as well as, or better than, the men. Even though we all secretly know that's just a fantasy, because the only thing a woman can do better than a man is birth a baby, and that's just because we don't have the parts for it. Pretty sure it says that in the Bible. Maybe right after that quick and the dead bit.

See, having Sharon Stone in the lead here doesn't scare us because we know this kind of exception to the rule is just there to appease the womenfolk a bit longer so the patriarchy can continue unabated. She's just another commodity to fuel the continuance of a Hollywood where she just doesn't matter as much as the men do. She may think she's important, that she gets to pick the director--Sharon Stone did--and she can pay to get an actor she wants--Stone reportedly paid DiCaprio's salary herself--but this is just one film out of hundreds released in a year, and about 99% of those were focused on men.

And that hasn't changed in another two decades. That the recent Mad Max: Fury Road was centered around women, and women who didn't just fill in roles that could easily be filled by men, may have earned the film some headlines and excited feminists and frightened misogynists, but most of the movies this year, and pretty much all of the action films aside from that one, will be male-focused.