the ghost is just a metaphor

Guillermo del Toro has a couple modes when it comes to horror films; there are those that prove he is enamored of old gothic horror and those that break the mold and do something a little more original. The former tends to be more predictable, the latter more interesting. Crimson Peak falls squarely into the former camp. Because it is del Toro, though, it is certainly well made, and looks far better than most horror films. It has a solid cast—Mia Wasikowska, Tom Hiddleston, Jessica Chastain, Charlie Hunnam—and a sound design that is, at its best, an evocative score that brings to mind some of the greatest horror and, at its worst, seems trite and clichéd, bringing to mind the most stereotypical of horror.

The plot hinges on common tropes from gothic romance and gothic horror, an isolated house on the English moors—one so old that it is quite literally falling apart—an enigmatic nobleman, an impressionable young woman, ghosts that—MINOR SPOILER—barely affect the plot at all but suggest the darkness of which people are capable—

(It is the kind of darkness that could easily be on display through the other characters’ actions—and are--without ghosts… But, that is the way of gothic stories. One gets the hint of larger themes, deeper histories, whether the surface story delves into them at all. Which, honestly, is one of the weaknesses of Crimson Peak but I will get into that more below after the big SPOILER tag.)

—before we get to any characters committing to (or trying to escape) such darkness. Jim Beaver (who I know well from Supernatural) plays Edith’s (Wasikowska) father, who disapproves of her new suitor, Sir Thomas Sharpe (Hiddleston) but gets left behind after act one as the action moves from a vaguely American city to the English countryside. He does well with his handful of scenes, as does Charlie Hunnam as a doctor who has been interested in Edith for some time but has only just come back to town (in the America-set first act); Hunnam’s Alan gets to return for act three, but—along the lines of…

I was trying not to get into SPOILERS too soon, but I just cannot help it. If you intend to see the film and don’t want it SPOILED, do not read any further than this paragraph. Just know that if you have an interest in the film, you will probably enjoy it. If nothing else, you will appreciate it as I did as an exemplar of gothic horror. Honestly, the film will probably work better for anyone not familiar with the genre, except so many of the details of gothic horror have been borrowed into other genres that they all play a bit clichéd. But, the film looks good, the Allerdale Hall set is amazing in its detail—including especially the pieces that are rotting or the holes in the ceiling through which snow seems to incessantly fall—and the performances work. (Honestly, the more I see of Wasikowska, the less impressed I am by her, because her range is limited, but this role fits into that range.) 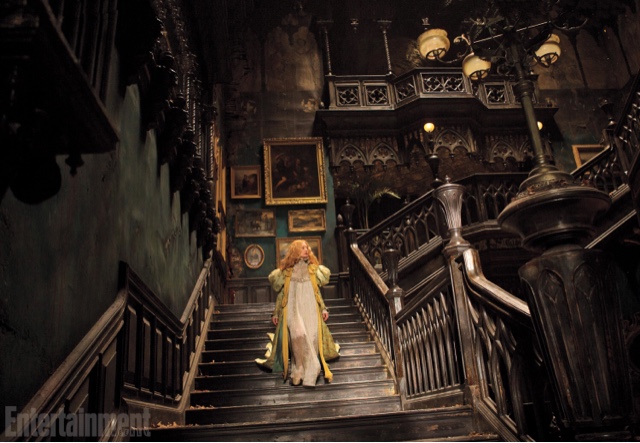 There are two big flaws in Crimson Peak.

The first big flaw is that the film does not need its ghosts. Early in the film, Edith tells her potential publisher (and then also tells Thomas) that the ghost in the novel she has written (more on her status as a writer below) is representative of the past. The murder that ends act one is the spur to the rest of the action. Thomas’ and his sister Lucille’s (Chastain) need for money—and their incestuous relationship, not to mention the previous wives they have duped—fuel the plot. The ghosts are only incidental; in fact, the ghosts draw Edith to actual evidence of what the Sharpes have done, which serves simply to hurry the plot, not activate it. Even worse, most of the ghostly action is not even visible to Edith; it is there for us in the audience.

The second big flaw follows on the last; while musical cues and their decayed appearances try to make the ghosts scary, the movie lets us know in the first ten minutes that the ghosts are not (necessarily) bad. Edith begins the story by telling—and let us not get into a discussion of the unnecessary bookend narration—us that ghosts are real and she saw her first one at age 10. It was her recently deceased mother (and her appearance is quite prominent in the trailer for the film—the black smoky ghost who puts its hands over the shoulder of a sleeping little girl, 10-year-old Edith), who initially frightens young Edith then lies in bed with her and hugs her and warns her about going to Crimson Peak. An admonition that also serves little purpose in the plot that follows. By the time Edith figures out that Allerdale Hall is on the so-called “Crimson Peak”—

(If you must know, the area gets that name because in the winter the red clay—off of which the Sharpes are trying to make a living—seeps up into the snow and turns it red. That sequence with red snow in the trailer, not to mention the red dripping walls within certain parts of the house, has nothing to do with blood, though it certainly invokes some of the worst atrocities of gothic (and other haunted house-related) horror. That clay is destroying the house even as it is the (potential) source of a great fortune for the Sharpes if they can just get the capital to invest in the right mining equipment.)

—Edith already knows that worse matters than ghosts are afoot, and none of the ghosts have really made any attempt to hurt her. There is room for a clear moment of realization regarding the friendliness of the ghosts, but the moment we have comes too late to matter.

The other flaw in the film I would not call big because it comes from personal preference. The titlecard for the film is a book cover. As it turns out, Crimson Peak is a novel by Edith. Now, her novel from act one involved at least one ghost, but it (they?) was (were?) not central to the plot. They represent the past. Her publisher suggests she add a love story, and just a couple scenes later Thomas arrives into the story we’re watching to become her eventual husband. I was hoping (rather inappropriately, because it clearly was not going to be that kind of movie) for an Adaptation-style metatextual take on the story itself, a sort of deconstruction of its tropes perhaps. The coincidence that her novel and this story we’re seeing are similar (and this story eventually becomes a novel) suggests some depth (or its opposite, I suppose) that the actual story does not hold out. An extra level to the story, tying to the very structure of and tropes within the story would make this film into something unique.

As it is, Crimson Peak offers little, if anything, that is unique. It does what it does well. But there is nothing unexpected in the film, nothing surprising.