a child trapped in a man's body

Back into my comfort zone.

Friday the 13th Part 2 was, I think, the first Friday the 13th I bought for my VHS collection of the entire series in my 20s, so I’ve seen this one a lot. I really should buy a DVD set of these things—assuming a boxset exists. I haven’t even checked. How sad is that?

Jason is a very nice killer, taking the kettle off the burner like that. I mean, sure, he stuck a screwdriver into Alice’s face first, but does that really make him a bad guy? She did kill his mother, after all.

Crazy Ralph is back. They really should have had that same guy stick around for every one of these films.

Even though he dies in this one.

I suppose, since this sequel comes before Halloween‘s or Texas Chain Saw Massacre‘s, not to mention before the first Nightmare on Elm Street, this is where the slasher subgenre really gets going. Leatherface may have survived outright, Michael Myers may have survived his wound swell enough to get up and leave, but Jason is the first real supernatural killer here... at least in the more mainstream slasher films. There were probably already some cheap copycats. Copycats, sequels, all worth a look—even if some individual films are just plain awful. Wyrick (1998) argues, “If part of the horror genre’s pleasure has always been associated with the feeling of seeing the same movie over and over, then going back to the ur-texts of horror seems a kind of trumping, a repetition that claims a paradoxical originality” (p. 124).

Sidenote: it’s weird that this movie is set 5 years after the previous one, given it was released less than a year later. Since the original identified its setting as “The Present” this film must actually be set in the future (for its release date, anyway). That puts this film, in a weird way, outside the normal purview of the slasher film, taking place in the now, but specifically not the here.

This State Police guy should be more wary of just running off into the woods to chase someone. Apparently, he is not aware how easily one can get lost in the woods. A source I meant to use when I was watching The Blair Witch Project seven days in a row was Bower’s (2009) piece about how feedback errors can get you lost. Assuming this State Police guy doesn’t have every marker in those woods memorized—and considering how surprised he seems upon finding Jason’s shack, he doesn’t—he will end up doing

intermittent loop-de-loops... Circular walking occurs when people have to rely solely on bodily cues, such as rotational shifts and joint movements, to estimate the location of “straight ahead”... As random errors in bodily feedback accumulate, a person drifts to one side or the other. (Bower, 2009, p. 14)

And, full frontal nudity comes to the slasher film. That girl is not going to be the Final Girl.

Jenny makes a great argument about Jason not even understanding death. Assuming he’s been alive since his “drowning” he has been raised in the woods with only his mother around. He wouldn’t necessarily know that it is wrong to kill people. Or, even if he does understand that sort of morality, perhaps he was raised to protect what is his, his territory on the lake. See, here’s the thing: Jason is not necessarily the bad guy. He is protecting his home against intruders. And, he learned from his own mother that these bad people deserve death. In addition to the geographic intrusion, keep in mind Pamela Voorhees’ attitudes about the counselors in regards to her son’s “drowning”; she complains to Alice (in a scene from the first film replayed at the beginning of this one) about how the counselors were making love when Jason should have been watched. And, arguably, she’s got a point. It might not be an offense punishable by death by most standards, but there is some blame to be had.

And, she probably took that conservative morality and ingrained it in her boy. His killing of Jeff and Sandra, running a spear through them as they have sex, does seem to echo Phinehas’ killing of Zimri and Cozbi in Numbers 25:8. And, the morality of these movies, generally, fits with that sort of thing...

I must interrupt this argument in favor of Jason’s killing to say that his cowering away from the chain saw Jenny picks up made him not seem so scary anymore. Imagine Kane Hodder’s Jason in that scene. He would have grabbed that chain saw right out of her hands, most likely, then shoved it through her abdomen. The brute force of that later Jason is far more menacing than this guy. And the slow deliberateness of his movements plays much more like something not so human. 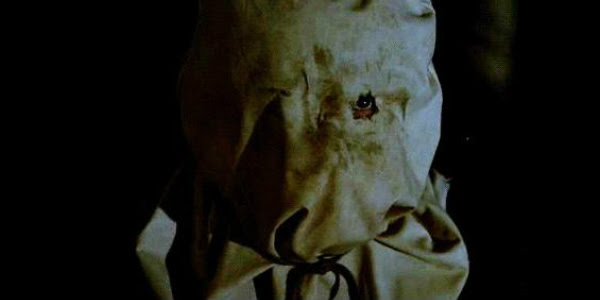 As for Jason’s morality, well, it seems wrong to call him evil when we enjoy what he does. Though, to be fair, his mother did apparently use the Necronomicon Ex-Mortis to bring him back from the dead. That certainly implies some... darkness if not some normative standard for evil.

He’s more like a force of nature, anyway, especially once Kane Hodder is behind the mask.

One final note on Friday the 13th Part 2: Jenny is not quite the Final Girl, since Paul saves her when Jason catches on to her ruse of being his mother, but she is the one who puts the machete into Jason’s shoulder. Plus, the actual ending after that is perplexing. Jason shows up again, grabs Jenny, then cut to an ambulance taking her away and she’s asking where Paul is.