I haven’t seen A Nightmare on Elm Street 2: Freddy’s Revenge in quite a while. I can’t remember if it manages to do what the first one did in regards to the usual Final Girl setup, a la Carol J. Clover (1988, 1992)—that is, not have her (Does this one even have a Final Girl? The opening dream sequence suggests a male lead.) not grab some phallic weapon and fight back.

The first A Nightmare on Elm Street show us a lot of clocks—this one has already show a couple and it’s only 12 minutes in. The flow of time, or rather the altered flow of time is important to these movies because of the nature of dreams. But, there’s also a notable juxtaposition between the editing of film altering time and the fluid nature of dreams distorting time. If the former is done right, we don’t notice it because it helps draw us in and keep us captivated by the action. The latter may, after the fact, be revealed as very distortive, but during the dream it seems quite normal. Pinedo (1996) suggests that the play of time in the original Nightmare marks it as postmodern horror.

Meanwhile, Jesse’s dream just down, with the melting lamp and vinyl record suggests—and I assume it is deliberate—an allusion to Salvador Dali’s painting, “The Persistence of Memory.” 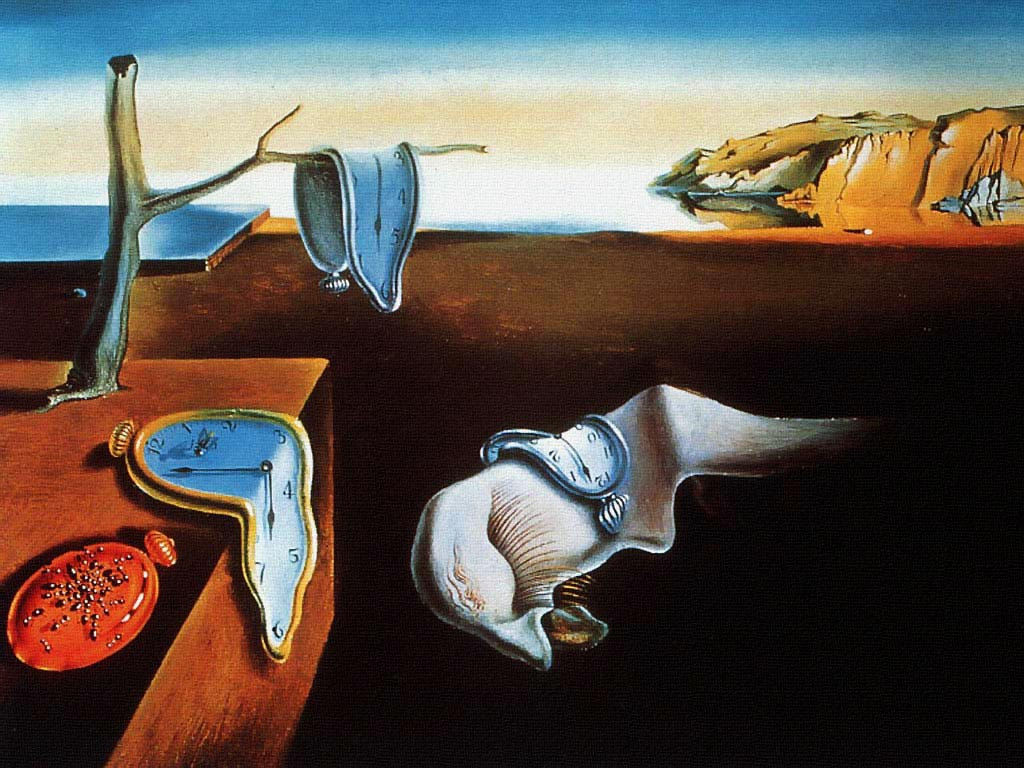 And, before I get back to the postmodern horror bit, it occurs to me that Freddy should not be targeting Jesse; he’s new to town so his parents should have had nothing to do with Freddy’s death. The subtitle of this movie—keep in mind I don’t recall much about this entry in the series, so maybe Jesse’s parents will turn out to have been involved—should not be Freddy’s Revenge but something much more descriptive, like Freddy’s Being an Ass. The slasher film villain, per Nowell’s (211) breakdown (that I detailed yesterday), kills for a reason. Not just the general psychosexual fury that Clover implies but also as an ongoing reaction to a specific trigger. Jason Voorhees kills out of revenge for his mother’s death (and she killed as revenge for his). Also, he kills out of a sort of territorialism around Crystal Lake. I don’t know where he lived before his death, but he lived there after, so the lake is his home, somewhere he probably feels safe, so when hedonistic teenagers show up and make trouble, Jason kills. Michael Myers kills... well, at this point in my “month” of slasher films, Michael’s motivation is questionable. At this point, Michael kills somewhat arbitrarily, but we were shown when he killed for the first time. And, the implication is that he killed his sister because she had sex... actually, I’m not sure if that was what people took from it at the time. That may just be a retrospective read of the murder after more slasher films came about. Perhaps Michael is not a good example. Freddy Krueger, though, kills—in the present—out of revenge for his own death. Of course, he was a murderer and presumably a child molester back when he was alive, but then later films in the series will make suggestions about Freddy’s origins.

My point is this: Freddy trying to use Jesse as some sort of surrogate doesn’t quite fit with the original film... Then again, maybe that makes this sequel more interesting because it isn’t what you might expect. I mean, at this point, Halloween had already had one Michael Myers-inclusive sequel, and Friday the 13th had given us 3 films with Jason as the killers, and one copycat. This sequel does not fit the formula.

Maybe that gives me an in for a discussion of Pinedo’s notions about the postmodern horror film...

(Also, there is some serious sexual stuff going on in this movie, possible a metaphor for homosexuality. There’s another person inside Jesse who wants to come out. Jesse basically had a shower scene (plus murder) with his male coach earlier. He just had trouble having sex with his “girlfriend” and then Freddy emerged from him (probably not literally) and penetrated his male friend. And, unlike many slasher films, this death was lingered on as if it were a female’s death. Meanwhile, the teenagers outside are all coupled according to heteronormative standards.) 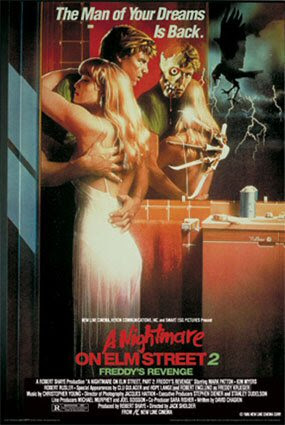 In A Nightmare on Elm Street, there is a glaring discrepancy between the explicit focus on time—the radio announces it, characters set deadlines by the clock, and the alarm clock goes off at previously discussed times—and the implied duration of the narrative events taking place in those time frames. Between 12:10 and 12:20, Nancy sets up a hammer to fall when the door is opened, setting a trip wire—and still has time to have a heartfelt talk with her mother. Time is unhinged, and this adds to the dreamlike texture of the film. (p. 23)

Similar stuff in this film play with time and space. Just now, at Lisa’s party, Freddy was able to disappear and reappear at will, to step through a wall of fire into, well, nowhere. What should only be possible in dreams has moved into reality... Except this reality is just a cinematic construct—oh, writing about Wes Craven’s New Nightmare ought to be fun. What is real and what is not real—the line between these things gets blurred a bit in the Nightmare on Elm Street films. On the one hand, this makes it hard for the audience to know what is happening, but on the other hand, that lack can increase the tension because you just don’t know what will happen either. As Pinedo puts it, “the referent or ‘reality’ is gone and [we* are] caught in a closed system from which there is no exit” (p. 22).

* Pinedo refers specifically to Nancy in the original film, but I would argue that we audience members are trapped in such a closed system as well. The world of the slasher film is something we cannot really exit either. Even if one series goes away, another one rises up. Eventually, there are remakes, and sequels to remakes. And all of these older movies remain available on video and DVD. Like the resumptions of Phil Connors’ time loop in Groundhog Day, each slasher film is an approximation of the one that came before it. Even this one, with its “male” lead and it’s “power of love” ending—yay for not going phallic—is reminiscent of other slasher films. Lisa’s pool party is Nowell’s (2011) leisure story-point. And, though the Stalking story-point is primarily internal in this film, it is still there.

Fittingly, Freddy’s Revenge ends right where it began, with a bus ride into the a desert that should not be there—remember, these films are set in Ohio. Arguably, there is no scene in this film that, even in the reality of the film, actually happens. Much like the original. The title is not a play on the presence of nightmares within the film but rather a deliberate telling of what the film itself is—a nightmare put to film.