you people give me the creeps

It’s daytime, hardly good for horror films, especially slasher films. They tend to take place in the dark exteriors (e.g. Friday the 13th), or in badly-lit interiors (e.g. Halloween II). Even when we know what’s in the dark—Michael, Jason, Freddy—it is scarier when we can’t quite see it, can’t quite gauge the moment or angle of attack. The unknown outweighs no matter how much detail is known. We fill in the gaps, we make it worse.

But, circumstance leaves me blogging from my office today, where even if I turned out the lights, would be rather bright because of the big window. And, there may be interruptions; even though I have no office hours right now, other TAs with whom I share the office may be in and out, and students may be by. But, in the meantime… 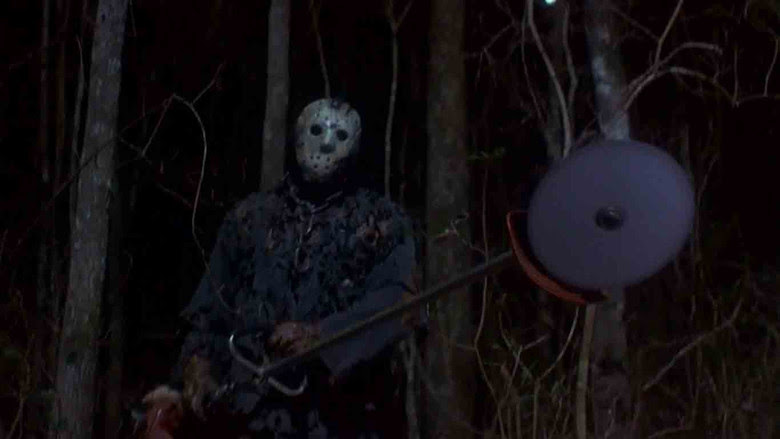 As the movie gets going—with a nice narrative setup—an interesting flashback is necessary. I found today some old reviews by Siskel and Ebert of Friday the 13th Part 2 and the original, repsectively. And, they are lovely.

Ebert’s description of the opening sequence is a thing of beauty.

The pretitle sequence showed one of the heroines of the original “Friday The 13th,” alone at home. She has nightmares, wakes up, undresses, is stalked by the camera, hears a noise in the kitchen. She tiptoes into the kitchen. Through the open window, a cat springs into the room. The audience screamed loudly and happily: It's fun to be scared. Then an unidentified man sunk an ice pick into the girl's brain, and, for me, the fun stopped.

Maybe in 1980, there wasn’t such an obvious expectation for what would later be termed the slasher film. Ebert does refer to the film as “a cross between the Mad Slasher and Dead teenager genres.” And, he says, “about two dozen movies a year feature a mad killer going berserk, and they’re all about as bad as this one. Some have a little more plot, some have a little less. It doesn’t matter.” I’ve always liked Ebert’s reviews, and one reason why is that he loves to be frank when he doesn’t like something. Here, it is quite clear, he does not like slasher films. I mean, while he says it’s “fun to be scared” it’s a little hard to believe he means it. True, there’s a difference between just being scared and what the slasher film does, both forcing and allowing us to be partner to murder.

He ends on an important note, after having begun his review talking about going to the movies as a kid. He saw Friday the 13th Part 2 at a theater in his hometown, the same theater he’d attended many times before. “Sinking into my seat in this movie theater from my childhood,” the last paragraph of his review begins, “I remembered the movie fantasies when I was a kid.

They involved teenagers who fell in love, made out with each other, customized their cars, listened to rock and roll, and were rebels without causes. Neither the kids in those movies nor the kids watching them would have understood a world view in which the primary function of teenagers is to be hacked to death. *This review will suffice for the Friday the 13th film of your choice.

First, he should realize that he’s talking about at least a generation removed between his childhood and the then-present. So, of course, those kids won’t be the same as the kids watching these movies. Fifties kids—they were far enough after World War I that they would have no real memory of it, and the Cold War was barely a thing yet, so they wouldn’t have much of the paranoia the came along with that. And, their monsters were either old fashioned movie monsters—mummies, werewolves, Frankenstein’s creature—or outlandish nuclear era creatures often more laughable than scary. Of course, being scared was fun. Being scared was just a distraction. Teenagers in 1980, though—they might have a little clearer idea of, say, Vietnam. Film had matured. Teenagers had matured. You know, the common way to think of it, times change.

I question Ebert’s suggestion that the “primary function” of the teens in slasher films is to be hacked to death. While they mostly do serve as fodder for whatever killer is around, there is much more to even the supporting characters in, well, any film than servicing the plot… well, unless the film is so poorly put together that everyone but the lead might as well be a nameless extra. The teens in a slasher film have a much more vital role than being victims—they serve as ins for the teenagers in the audience. It is not only for ease of scriptwriting that these teen characters often seem painted with simplistically broad strokes, but also to provide the various types of teens in the audience someone to identify with. As the film goes, each teen in the audience will have to find his/her way to identifying with the Final Girl, but along the way, there will be a nerdy character, a bitchy character, maybe a black character; there will be males and females, maybe even a couple adults in case the teens came to the movies with their parents, and on rarer occasion a kid (and the kid almost always lives), and there is always at least one character who you could imagine feeling perfectly at home in the audience next to you. In Part VII, it’s the Star Mummy guy. If not for all of these viewpoint characters, we wouldn’t find our ways into that cabin, or that dorm, or that babysitting gig. We’d be left, sinking into our seats, dreaming of the good ol’ days.

As for Gene Siskel, he calls the original Friday the 13th “a truly awful movie” and he purposely spoils the ending to keep people from seeing it. “In the meat-cleaver-in-the-forehead movie, ‘Friday the 13th,’ which also features a bloody, slow-motion decapitation,” he writes, “the killer turns out to be a bitter old lady playd by Besty [sic] (‘I’ve Got a Secret’) Palmer.” Big problem there, the audience for this film—they’re going to be more eager to see it when they hear there’s a “slow-motion decapitation,” not less eager. And, really, if he thinks as little of the audience for this kind of film (as he seems to), does he really think they’re going to be checking out his review before they head to theaters?

Still, he goes on, calling the movie, “the latest film by one of the most despicable creatures ever to infest the movie business, Sean S. Cunningham. You may have heard of one of his other films, ‘The Last House on the Left,’ a film in which a teen-age girl is forced at gunpoint to urinate on herself and then is shot in the head.” See, I’m of a mind that film is useful for presenting even the worst humanity has to offer. (Dare I link to my review of A Serbian Film again?) “In scene after scene,” Siskel writes, “we see girl counselors strip down to their underclothes, only to be stalked by the unseen killer…” First film out, I think that’s three girls, and at least one guy. Siskel suggests that the only reason Friday the 13th didn’t get an X-rating was because Paramount “pays part of the salary of the MPAA people who determine the ratings.” While, he certainly has a point about how the MPAA goes easier on big studio films—he also makes a fair point about how the film lingers on the female deaths more than the male—but it’s not as if this film were an isolated instance of violence becoming more visual, more elaborate, more real.

And, it’s hardly as if the society producing these films had no place in it for violence.

But, anyway, this topic will be continued…

And, it should be noted: I had wanted to talk about feminism in regards to this particular entry in the Friday the 13th series and the slasher genre. Perhaps another day.

As for this film, specifically—I like that Jason is not some mindless killer. He moves deliberately, not always slowly, and he makes some interesting moves here and there, like closing the door so Tina and Nick can’t get away, or going around to the back of the tent when he’s just been invited in. The design of him here, showing all his previous wounds and looking like he might have actually spent a decade underwater (unlike Tina’s father)—that’s cool too. The less human Jason looks, the better, I say. Plus, Kane Hodder, the best Jason of the bunch.