I have seen parts of Halloween [6]: The Curse of Michael Myers many, many times. I worked in a movie theater when this thing was out.

(I must interrupt this introduction to point out the lazy screenwriting and/or direction in having the doctor call her “Jamie Lloyd” when telling her to push. We’ll figure out who she is soon enough.)

I saw parts of this movie—especially the beginning and ending—a few times a day when I was working, which was a few days a week.

(Not two minutes later, call her Jamie again, you know, just in case the audience doesn’t get it. It might actually play better if we have to figure this crap out for ourselves.)

I believe I said before that Halloween 4, 5 and [6] work together pretty well. The thorn setup, while certainly not what the audience wanted, makes retrospective sense. Michael tensed up a the beginning of 4 when his niece (which we can assume he didn’t know about previously) was mentioned... more on the cult stuff as it comes up in this film.

(You know what would have been nice, even as much as I hate Halloween III, if the cult in this film were linked to the Shamrock folk in that film.)

In the behind-the-scenes stuff on the DVD for 5 Ellie Cornell says something about knowing that her character, Rachel, having survived 4 was not going to last long in 5, except that isn’t necessarily a thing in slasher films. Survivors tend to a) not come back or b) keep surviving. Tommy Jarvis, for example, survives three Friday the 13th entries. Laurie Strode survives both of her initial Halloween entries, is killed off offscreen then rewritten (or retconned—I’ll doublecheck how that goes when I watch H20 again in a couple days) into still being alive to survive an entire movie, plus part of a fourth. Jamie Lloyd survives two then gets killed in her third—which really plays as an inappropriate plot development as I see it. Jason and Freddy both had plotlines involving infant relatives, and the mothers of those infants didn’t need to be dead just for the plot to work.

Meanwhile, we’re introduced to an adult Tommy Doyle plus the Strode family—relatives of Laurie’s adoptive family—living in the Myers House (the Strodes living there, I mean; Tommy lives across the street). John, the asshole of a patriarch, is brother to Laurie’s real estate agent father. Kara, John’s prodigal daughter, has returned home with a bastard son, and is taking college courses in psychology.

Dr. Loomis comes by to tell Kara’s mother about Michael Myers and the house and only barely in time for Michael to come by and kill her. She was smart enough to believe Loomis, though, but it was just too late for her.

Tommy gets to explain “the curse of thorn.” Basically, sacrifice one family to the demon represented by Thorn to save the tribe. Michael was supposed to sacrifice his family...

Minor quibble: what about Michael’s parents? Did they not count in this sacrifice?

Major quibble: why kill everyone else? why go around stalking people, showing up to scare people first, then giving them a little time to get away, before you kill them? You can’t really protect the rest of the tribe if you somewhat randomly kill its members.

The thing is, Michael is cruel. He is not an emotionless killer. Case-in-point: his murder of Jamie. He stalks her, he catches her, and he shoves her onto whatever that piece of farming equipment is. Then, she tells him he can’t have the baby, and he steps to the side and turns on the machinery to basically grind up her insides. It’s unnecessary. But, he does it anyway. After he kills Beth, he not only leaves her in the bed, he pulls the blanket over her so it looks like she’s asleep, and he hides Tim under that blanket. He props up bodies to be discovered, the only real purpose of which is to scare people. Basically, I think it’s fair to say Michael enjoys this. Sure, the cult and the Thorn curse is behind it, but Michael is just fine with what he’s got to do and what he gets to do.

Dr. Wynn, though played by three different actors, does appear in the original Halloween as well as 5 before being revealed here as the silver-tipped boots guy from 5 and (apparent) leader of the Cult of Thorn.

The ending… Tommy kinda losing it as he basically beats Michael to death with a pipe—that’s a good ending, I suppose. Then—note: I just watched the version that’s on Netflix, not the “Producer’s Cut”—Loomis shows up, says he’s got some business to attend to inside, we see that Michael is gone, we hear Loomis screaming, and, the end? It’s a weird edit, meant to imply that Loomis was killed (Donald Pleasence had died between production and post-test-screening reshoots)…

So, I turn on a copy of that “Producer’s Cut,” jump ahead to the end. Basically, from the Cult of Thorn showing up at the house, it’s different. Instead of waking up on a bed at Smith’s Grove (the version I just watched), here Kara wakes up tied to an altar in an old-fashioned sacrifice ritual. Classic cinematic visuals, but not the sort of thing movies take seriously anymore.

Tommy’s got an idea about canceling out the Thorn rune with a good rune… sounds a little like another Tommy, with notions that he knows how to stop the killer.

Wynn gets a bit of speechifying in, Loomis is knocked out, then on to the ritual, with Danny and Michael standing around. Kara suggests that Jamie’s baby is Michael’s (in a dream earlier—Jamie is shot while in the hospital, having survived Michael’s attack—we see evidence that Michael was, indeed, the father). 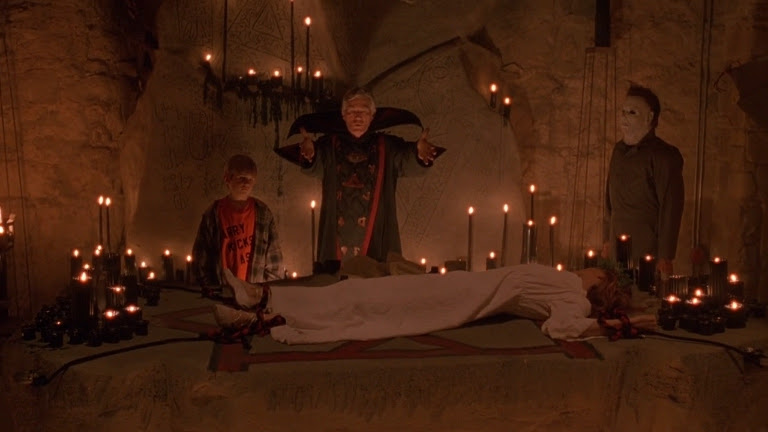 And, Michael gets stopped by some stones… Loomis ends up with the mark of Thorn, and Michael leaves, dressed in Wynn’s clothes (but no silver-tipped boots).

Hm. Problematic in that it not only leaves Loomis alive but suggests an entirely new role for him in future Halloween films. But, otherwise, it works fairly well. Tommy’s crazed beating was nice—and a bit therapeutic—but it isn’t necessarily missed.

Whatever the ending, the next entry in the series that we get pretty much leaves any version of this film behind.