you can't get the adrenaline pumpin' without the terror, good people

It’s like this... We live in claustrophobia, the land of steel & concrete. Trapped by dark waters. There is no escape. Nor do we want it. We’ve come to thrive on it and each other. You can’t get the adrenaline pumpin’ without the terror, good people... I love this town.

A few shots of New York City (and it’s stand-in locations in Vancouver, then cut to Crystal Lake. No campers in this movie, though. A couple high school graduates on a boat on the lake and then we leave the lake, and even leave New Jersey. 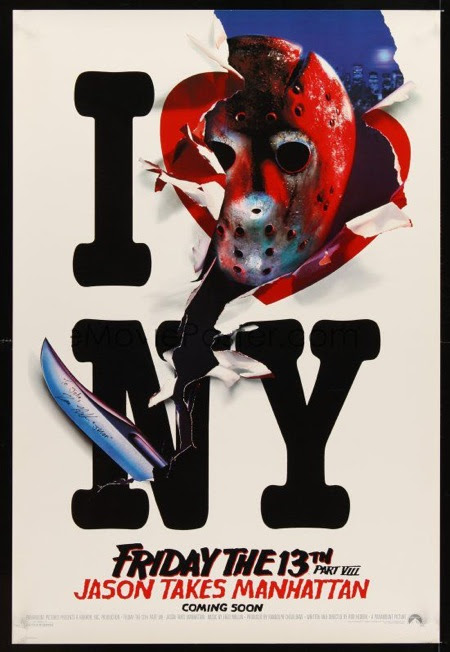 Jim tells Suzi about the murders around Crystal Lake, and ends amazingly... “And every now and then, the murders start up again.” Beat “Forget about it, Suzi. They’re just stories.” Proceeds to disappear, then shows up in a hockey mask (a conveniently scarred in the forehead mask, I would add—Jason’s injury from the end of The Final Chapter, not the break by the eye socket, though) and stabs her with a trick knife.

Jason shows up once they’re back in bed, dons the new mask—remember, Tina broke his old one in The New Blood—and kills ‘em both. He’s a bit cruel with Suzi, actually, bringing the spear down toward her slowly while she screams.

The Final Girl (and Guy) are introduced rather obviously—they each have character-building storylines going right away—his father (the ship’s captain) wants him to take up captaining, and she, for a so far unexplained reason wasn’t even supposed to be on this boat trip, and apparently she writes—teacher gave her a pen that supposedly belonged to Stephen King.

Introduce us to a few characters, let us know just enough about them to tell them apart but not enough to make us necessarily care when they die... which may contradict something I said the other day; I believe I said the point to having all the different types of teenage characters was as easy ins for the audience members, and I don’t think that’s wrong. I just think it’s secondary to making sure the series of murders is not monotonous. Karnick (2008) argues that Friday the 13th (the original), “changed the horror genre significantly by removing any chance of identification with or concern for the victims beyond the most basic humanitarian feelings.” I think this says more about Karnick than the general audience. “The victims are presented as generic American teens,” Karnick continues, “and beyond that we know nothing about them.” Thing is, the characterization we get on, say, Sean with his captain father is not any deeper than Tamara and her “biology project” or Wayne and his camera.

(Continuity nitpick: a) Jason’s back should be showing not only more flesh but some ribs—he did not have the opportunity to change clothes since Tina (and her dead father) sank him to the bottom of Crystal Lake in The New Blood. b) He also should not need to be picking up so many random things (a sauna rock, a piece of broken mirror, a harpoon, etc.) to kill people because he should still be wearing that toolbelt thing he had on in Jason Lives.

(Kill nitpick: Jason stabbed downward with that harpoon thingy, would have had to the guy’s leg or butt at best, but then on the ground, the guy has the harpoon angled upward into his back.)

“As the killings occur,” Karnick says, “the audience does not look upon the characters with sympathy or even assimilate their demises as the deaths of real human beings. On the contrary, the entire film is a stylized presentation of bloody but strangely unaffecting mayhem.” He’s talking about the original Friday the 13th, but the same is generally applied to each film in this series and all the other slasher series. My thing, though, is it is simplistic to assume we cannot both care about the victims in these films and cheer when they are killed. These two things may seem contradictory, but they just aren’t. Perhaps Karnick just has trouble caring about fictional characters (or other human beings) in general.

(Timeline nitpick: there is no way Rennie could have been in the lake with a child Jason. He drowned in 1958. Even if Jason Takes Manhattan took place in 1989 (the date of its release), which it does not, Jason still would have been a kid more than two decades ago, well before Rennie was even born.)

typically initiated by a grievous wrong against the killer or someone the killer cares about, usually done by ordinary people who didn’t know any better. The genre therefore conveys the impression of a world gone unaccountably violent, with vengeance often visited not upon those responsible for wrongdoing but instead upon innocents.

(Ending nitpick: a) The leaving behind of the kid makes no sense, but Jason Goes to Hell skips right past the formality of resurrecting Jason to having him just already be alive again, so it doesn’t matter much. b) That being said, did Rennie and Sean just leave that kid in the sewer? That is just rude.)