the error of their ways

Opening credits that scream 3D and music that seems more suited to the 70s than 1982—that’s the beginning of Friday the 13th Part III. And, this couple at the store remind me—not in their behavior but in there sort of unnecessaryness—of the old couple at the beginning of Halloween II. I guess these movies borrow from each other, back-and-forth.

Lame 3D bits make this movie quite silly; guy has a wood pole, so what does he have to do for a moment? Point it at the camera. There’s a snake so of course it has to come at the camera. I kinda wanted Harold to get killed there after checking behind like 9 curtains and doors before finally, there was Jason with a cleaver.

3D warning: rat has to crawl toward the camera.

3D warning: baseball bat that has absolutely nothing to do with anything also has to be sticking out toward the camera. This is the kind of gimmicky crap that makes 3D look pointless.

3D warning: offer the audience a joint. I really don’t like the makers of this film right now.

As for content, no summer camp, so they were trying something different. Just a bunch of young people going to the lake. Been a while since I watched a few of these movies, but if I recall correctly, there won’t be a “summer camp” again until Part VI.

3D warning: second class Ralph just has to hold the eyeball in a baggie up to the camera—can’t really tell what it is without the characters having told us, so the effect is limited.

I remember reading once—I think it was in the souvenir Friday the 13th magazine they put out when Jason Goes to Hell came out—that this main girl was serious about being an actress (and/or religious), and she convinced the filmmakers to cut the sex/nudity from the film. If anything needed to be in 3D...

The axe in the head joke was awesome. They all need to lighten up.

3D warning: Shelley throws his wallet toward the camera.

Windshield breaking doesn’t really go toward the camera, but that guy’s fist with the chains wrapped around it does. Then the worst...

3D warning: yo-yo. Does it matter later? Does Jason kill Andy with his own yo-yo? Nope. Just there for the gimmick.

This motorcycle gang girl’s (her name is Fox, apparently) motivation for going into the barn? Absent.

White boy (Loco?) in the gang should probably not walk around with a gas can when he’s got a cigarette in his mouth. Of course his cigarette doesn’t seem to actually be lit. I think he might have some sort of cancer a la The Fault in Our Stars.

Jason jumps down from the hayloft. He’s a little too human. He also has no real motivation for anything he’s doing here. I mean, if he’s going to kill these people, why doesn’t he just do it? Instead, he waits in the barn.

Shelley needs to learn that just because a girl turns you down doesn’t mean she’s a bitch. But, he’ll die soon, so it’s ok. While Jason really just seems to want to kill everyone, he has a knack for killing people right after they’ve done something ethically or morally wrong.

Lead-is-a-serious-actress warning: backstory involving her mother hitting her... and it turns from an acting-school monologue into a flashback. And, scene. Give her a round of applause, ladies and gentlemen. And, an Oscar nomination. Or at least a Chainsaw Award... did those exist yet in 1982?

Jason’s motivation for shaking the outhouse while Cheech is in there? Yeah, that one’s absent too. Can’t just kill people. Gotta scare them first... well, when the movie needs some padding, anyway.

And, the one saving grace of Part III—the introduction of the hockey mask. Thank you Shelley.

And, the best use of the 3D follows: spear gun to the face.

Cut to awkward hammock sex in which we see nothing. I wouldn’t normally complain about the lack of sex and nudity (well, there’s brief nudity in the shower scene), but it’s s staple of the slasher film. Sex is supposed to be involved. Hell, the only reason Andy walks around on his hands is because the idea of him taking a machete between the legs makes for an interesting death.

3D warning: hot poker. Kinda cool if for the stabbing, though far too brief. Lame when he’s just holding it.

Nice 3D but bad effect (the face just looks fake) with the eye popping out of Rick’s face. 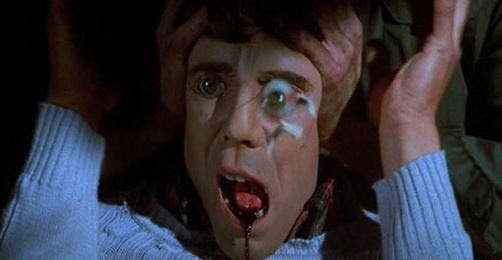 The windstorm seems like a cheap callback to the original, and just as unnecessary.

Rick’s body flying through the window could have been awesome in 3D. Missed opportunity there.

For a brief moment, I thought I could make something of the fact that the closet Chris hides in has a green door—some Behind the Green Door reference, but I don’t know enough about that film to make the (probably ridiculous) argument.

Jason’s frustration when he can’t find Chris in the barn is hilarious. Similarly, what looks like a brief smile as his mask comes off when he pulls himself out of the noose.

And, a couple more 3D warnings: the good being Jason coming at the camera with an axe in his head, the bad being that damn axe handle. 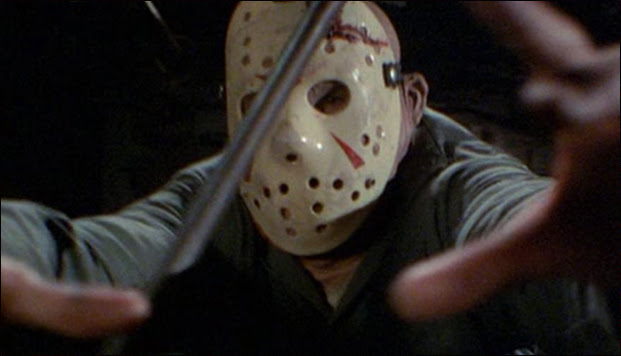 The canoe ending plays like a deliberate echo of the original. And, supposedly, this was supposed to end the series. The echo would make sense, then.

At least Friday the 13th Part III isn’t boring like Prom Night the other day. Stuff actually happens in this movie. Stupid stuff, but stuff.

Final note: Crystal Lake seems more like a tiny little pond in this film, even like an indoor set in a few scenes (like the girl fishing Shelley’s wallet out). It doesn’t seem at all like a “lake.”