the killer's gonna get you

And then it gets weird... 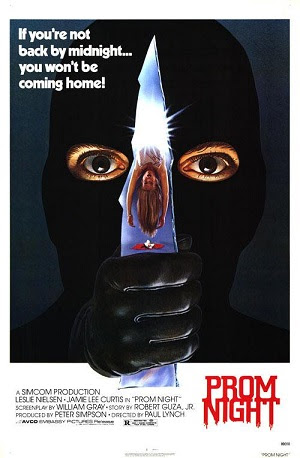 …because I think I’ve only ever actually seen Prom Night once. There’s no comfort in the specifics here. Still, there is... something nice in the general nature of the film. A regular commenter here, Maolsheachlann said something interesting in response to yesterday‘s entry; he said horror films made him feel “cozy.” Like me, he has childhood associations with horror films. But, he made a observation similar to some I’ve made... worded nicely:

But, sometimes I think it is a strange relief, and release, that you are mentally inhabiting a world where the worst has happened—or if not the worst, necessarily, than a world where it’s OK to be paranoid and fatalistic and you don’t have to rein in your darkest fantasies any more.

This won’t connect at first, but bear with me. The topic I had hoped to talk about today was the verisimilitude of slasher films having very specific settings. They tell us the date, the town name. There isn’t much left vague. Psycho begins quite specifically in Phoenix, Arizona, and it’s “Friday, December the Eleventh” and more specifically “Two Forty-Three P.M.” Halloween opens on Halloween night, 1963, then moves forward to October 30, 1978, and the setting is Haddonfield, Illinois. The Texas Chain Saw Massacre takes place August 18, 1973. The Nightmare on Elm Street films are set in Springwood, Ohio. The Friday the 13th films take place in and around Crystal Lake, New Jersey, and generally on Friday the 13th, though I’m not sure if any but the first one specify that detail. The point is, slasher films have good reason to specify their settings. They need reality. It’s a weird situation in which the setting being more specific makes the audience’s link to the material more abstract. Like the general act of death (per my argument yesterday, the entire situation in these movies can be abstracted because the setting is a specific day, a specific location. Meanwhile, this movie plays more like a high school drama than a horror film. And, the voiceover-ish bits with the detective trying to figure out what’s going on seem out of place. I figure horror films shouldn’t have narration, just like romantic comedies shouldn’t; as Henderson (1978) argues, these movie must take place in the present, “without mediation” (p. 20). Horror films, then—and let’s assume I am primarily talking about slasher films, but the same may apply to many a horror film—specifically take place in the immediate past. For the most part; I’ll be getting to Jason X later this month, and that film blatantly exists outside of this “rule.” And, there are gothic horror stories and films as well, set farther in the past, but slasher films take place now. I think I saw Halloween 4 on October 30, 1988 (though it had been released on the 21st), one of the days covered within the film. And, I know I saw Jason Goes to Hell on the Friday, August 13, 1993, it’s day of release, but I’m not sure if that movie ever specifically names the date. Halloween: The Curse of Michael Myers was released more than a month before Halloween in 1995, but I probably saw at least part if it on Halloween, because I worked at a movie theater that year and saw parts of that movie several times a week.

But, it really doesn’t matter if you see on the date on screen, because you’re probably not in Haddonfield, Illinois or Crystal Lake, New Jersey or Springwood, Ohio.

And, let’s hope you’re not at this disco prom that seems intent on distracting from whatever plot may be happening. I mean, nearly an hour into the movie and aside from a couple phone calls and a few weird shots of dark hallways, this is not a horror film. The dancing, and the 70s hair are the scary elements here.

And, I am very glad those things exist in the past.

And, an hour in we get a murder. And, right after Kelly doesn’t go through with having sex with her Drew. That should make her candidate for Final Girl not the first victim in the slasher sequence. Next two victims—now, that’s appropriate. They do drugs and have sex.

And, why does the killer have an axe now? The piece of mirror was (supposed to be) symbolic; an axe is just a weapon. I am disappointed in you, killer who is so obviously the girl from the beginning of the movie that it just can’t be... Then a 7-minute chase ends with a swipe of the axe, cut to black, no... release.

Is it wrong that I want Carrie to show up at this prom and kill everyone?

The beheading and accidental self electrocution was just awesome and funny enough to maybe make up for the rest of the movie being boring so far.