it was supposed to be a spiritual experience

Note #1 - Texas Chainsaw Massacre: The Next Generation is set according to the titlecard at the beginning May 22, 1996. Depending on how you look at it, it was released either in 1994 (which for how I’ve been watching these films puts it a few days ago, between Jason Goes to Hell and New Nightmare) or 1997—it had two releases and, if I remember it rightly, barely even got released.

Note #2 - At this point, the slasher film is dead. Jason’s dead. Freddy’s dead, briefly meta-revived, then dead again. The two of them are partying it up in Hell planning a crossover film that would take a decade to come to fruition. Michael has, depending on the edit of Curse of Michael Myers either been beaten mostly to death then maybe kinda disappeared and/or killed Dr. Loomis or left Dr. Wynn for dead, finally changed his own look, and walked off into the metaphorical sunset (actually a long hallway that inexplicably has very few doors). Michael’s not dead, but he’s free; the curse may have moved on to Danny Strode, and the job of looking after him has moved on to Dr. Loomis (meaning Loomis is not in a position to want to stop Michael even if he were still killing people—and since I argued that Michael was enjoying his job, it’s safe to say he might still be interested in killing people, Thorn curse or not. But anyway, I’ve previously framed the slasher film as a sort of response to the women’s movement of the 1960s, notions about gender equality challenging what it meant to be a man or a woman, masculine or feminine.

(Meanwhile, are those fake breasts the woman flashes the first nudity in the Texas Chainsaw films? There has been implied offscreen sex before—plus that Leatherface/Stretch bit in 2—but I don’t recall any nudity.) 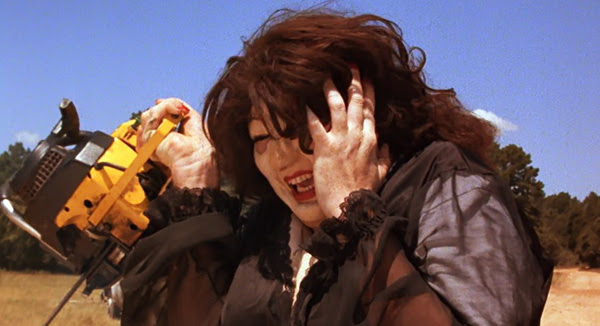 (Really, the Texas Chainsaw films, while they generally get lumped together with slasher films, don’t quite fit the usual mold. Too few victims, not enough inferable commentary on gender roles/relations. There is the psychosexual fury, sure, but is that enough? Or is that an aspect to any horror film, maybe? Is all horror inherently sexual? The Texas Chainsaw films are closer to The Hills Have Eyes or Wrong Turn, with the classist urban vs. rural underpinnings. While the slasher film generally takes place in a more rural location, it isn’t necessarily a requisite detail.)

Renee Zellweger and Matthew McConaughey, Oscar-caliber actors, and he’s hamming it up and she’s barely registering. It’s interesting that the later release of this film was delayed to cash in on her Oscar win, but his people tried to keep the film from being released.

I’ve mentioned before how many later-big name actors had parts in slasher films. While this film isn’t very good, I’m not sure why it should be such a horrible thing to have on one’s resume...

Actually, I take that back. Almost immediately after typing it, I take it back. This movie should be offensive to pretty much anyone who lives in rural Texas—since they are nothing but mentally deranged and/or deficient killers in this film. The helpless young kids who wandered into their territory don’t fare much better. McConaughey and Zellweger are both from Texas, so, yeah, they should probably distance themselves from this thing.

Possibly even worse, considering what is happening in this film, why the lack of gore? I mean, for example, I have no idea what Vilmer just did to Heather. Bit her somewhere on her face, I guess... ah, later, we see a little bit of blood on her nose

Then the film goes crazy.