reach out and cut someone

As A Nightmare on Elm Street 4: The Dream Master begins, I realize I don’t really remember this movie. I know I’ve seen it, because I watched all of these movies on video in the 90s. It seems to begin with shared nightmares continuing without Freddy, which is an interesting idea. Joey, Kincaid and Kristen from the previous film in the series are back. Kristen is no longer played by Patricia Arquette...

Speaking of which, I haven’t mentioned the big names that are in all of these slasher films. Kevin Bacon in Friday the 13th, Dennis Hopper in The Texas Chainsaw Massacre 2, Patricia Arquette and Laurence (billed as Larry) Fishburne in A Nightmare on Elm Street 3: Dream Warriors.

Johnny Depp in A Nightmare on Elm Street, Corey Feldman in Friday the 13th: The Final Chapter. And of course Jamie Lee Curtis in Halloween. All who went on to more mainstream success.

Nice shot when Kristen’s mother drugged her so she’d sleep. The camera spins and even goes upside-down for a bit. As disorienting for us as for her.

Burying a bunch of Freddy’s victims next to each other seems sort of... wrong to me. 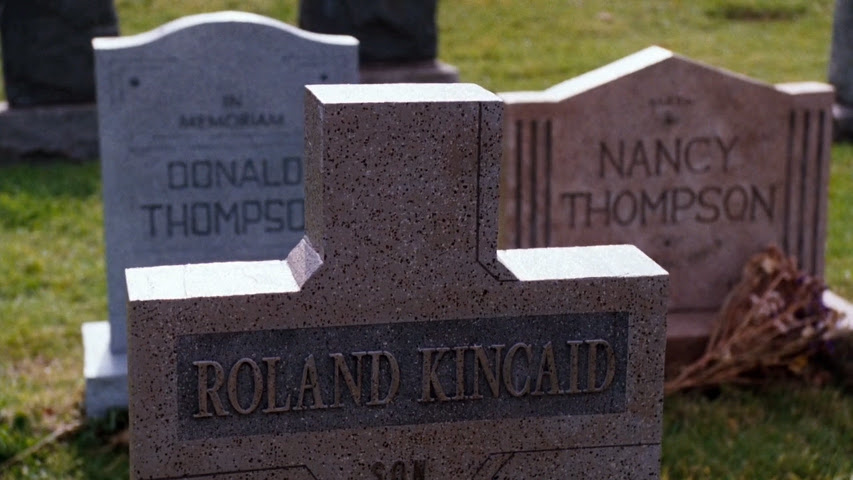 Weird sidenote: people don’t get gravemarkers that fast. Kincaid died like yesterday and Kristen just died. It’s common in movies and TV shows to have gravemarkers almost immediately, but it is not realistic.

The Final Girls in these last couple Nightmare movies make me want to revisit gender again—bring in some Clover (1988, 1992), some Christensen (2011), some Rieser (2001)... But, not tonight. Like that night about a week ago, watching the original A Nightmare on Elm Street, I am tired. It’s been a long week. Teaching a couple public speaking classes, plus coaching forensics, plus grad school—it’s tiring stuff. I do ok through the week, but it catches up. Got work to do on my thesis in the next few weeks as well—going forward with my prospectus related to this blog (or at least the earlier version of it)...

Turning to violence to defeat Freddy—that’s not gonna work. It’s too... masculine. Use of the bug zapper thingy, on the other hand... That’s a little more cerebral. I both love and hate how the Nightmare movies seem to be making all of this stuff up as they go. Childish rhymes, brand new ideas (the titular Dream Master)...

Freddy getting pulled apart by tiny little people inside him—awesome visual, especially for what looks to be all practical effects.

But, what none of these characters understand is, of course you can’t defeat an idea. And, Freddy is really only just that, an idea. You can’t stop a nightmare as long as you’re afraid. At the end of each of these films, you get the sense of the fear being lifted away, but ultimately, it’s part of the human condition. Fear, I mean. Freddy tells Alice that he’s eternal, and he’s not wrong.

I can’t wait to get to New Nightmare.