so, what were you gonna be when you grew up?

Twice we’ve been left with endings implying Tommy may have turned bad, that he might even take up the homicidal mantle left vacant with the death of Jason Voorhees. A New Beginning even tries (but not particularly well) to implicate Tommy in the deaths therein, but here, as Friday the 13th Part VI: Jason Lives begins, Tommy is maybe a bit eccentric, possibly insane, but he’s still the good guy.

On the IMDb boards, a guy was suggesting that Jason was just a man prior to his resurrection here. Jason Goes to Hell suggests otherwise, but at this point in the series, it might be debatable.

Since three people have now played Tommy Jarvis, I wanted to look at the timeline of these films, but first a comment: 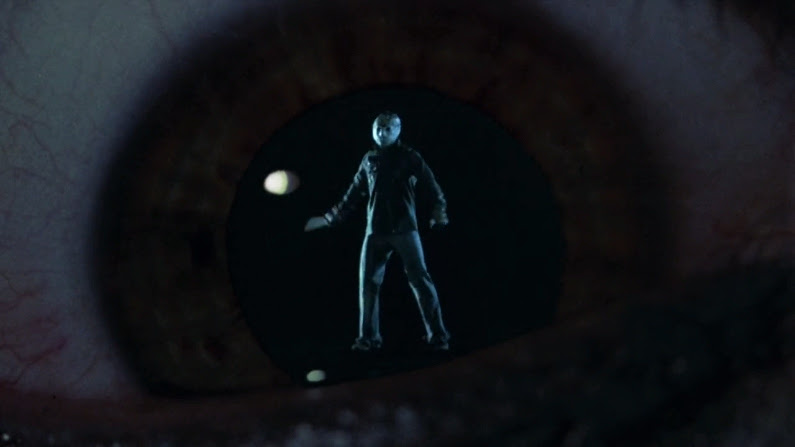 Jason, in the title sequence to this entry in the series has essentially become horror’s James Bond. Since he still remains the most prolific slasher, and at this time had the most films in his franchise, the comparison is apt. The James Bond films would be one of the few franchises to have more films than the Friday the 13th series. Counting Freddy vs. Jason and the “remake,” there are 12 Friday the 13th films.

As for the timeline...

Jason Voorhees was born June 13, 1946 and “died” in 1957. In 1958, his mother killed two camp counselors. In 1962, she poisoned the water and started some fires to prevent the camp from opening. In 1979, she would again kill a few counselors—the primary events in the original Friday the 13th, which should be set in 1980, since it says it’s set in “the present” and it was in theaters in May 1980, but Pamela Voorhees’ grave marker seen a couple films later says she died in 1979.

Tommy Jarvis is 12 here, played by 13-year-old Corey Feldman. A New Beginning (released in March 1985) takes place six years later (1990), and Jason Lives is another year after that (1991). Interestingly, the flashback to Tina’s childhood in The New Blood takes place in 1991 as well... presumably, but then I’m going by some fan guesses, I think, not textual details. Jason Takes Manhattan (released in July 1989) is supposed to be set in 2002. I just checked the movie (pausing this one) to see if the banners say what year the graduating class is; they do not. Anyway, again from fan guesses, The New Blood should be set a year earlier (2001) and the flashback with Tina is 10 years before that. The flashback to Rennie’s childhood in Jason Takes Manhattan would take place in 1998.

Jason Goes to Hell was released in August 1993 but deliberately makes no reference to its timing relative to the other films. I’ve said before, the opening sequence in this film suggests that Jason is a known entity with an ongoing murder career. The film would have to be set sometime between 2002 and 2008.

I’ve suggested before that slasher films tend to have very specific settings. They also take place in the present. The Friday the 13th films, which really work as a backbone for the slasher genre, suggest otherwise. Parts 2, III and The Final Chapter taking place so close together was a good way for the releases to catch up to the present of the films, but then they had to jump forward for A New Beginning... Had they planned ahead, they could have simply released Friday the 13th films just on years where Jason’s birthday was actually on a Friday.

Note, other than 1958, none of the films’ setting years (figured above) had June 13 on a Friday, including 1979, when Mrs. Voorhees specifically calls it her son’s birthday.

By the way, if you are feeling as obsessive about this as I am—you probably are not—you should know that only four Friday the 13th films (III, The Final Chapter, Jason Lives and Jason Goes to Hell) were released on Friday the 13th, and not one was released in June.

And, the movie seems to have ended while I was figuring all of that stuff out. I didn’t even get to comment on a couple of my favorite lines—the one I used as the title for today’s blog, “It was real, just like on TV,” and “Kathleen, you led me astray.” Note, that last one, if you are not familiar, was an old drunk talking to his bottle. I also didn’t get to comment on the one counselor’s ridiculous story about the Indian Chief, or Jason’s maggots, or the paintball folks, or Jason’s belt of weapons—I mean, that dude is not just grabbing whatever is handy anymore, though I’m not sure when he upgraded to carrying his own weapons.