The weird thing today is that as the Halloween theme starts playing, I am comforted. On a list of movies I’ve seen, ordered by numbers of times I’ve seen it, this would be pretty close to the top. It’s like the movie equivalent of comfort food. Some people may reminisce about their mother’s cooking or the trees they climbed—actually, I could do that one—or the empty lot they used to play in way back when, you know nostalgia for the olden days.... for me, horror films are that thing. 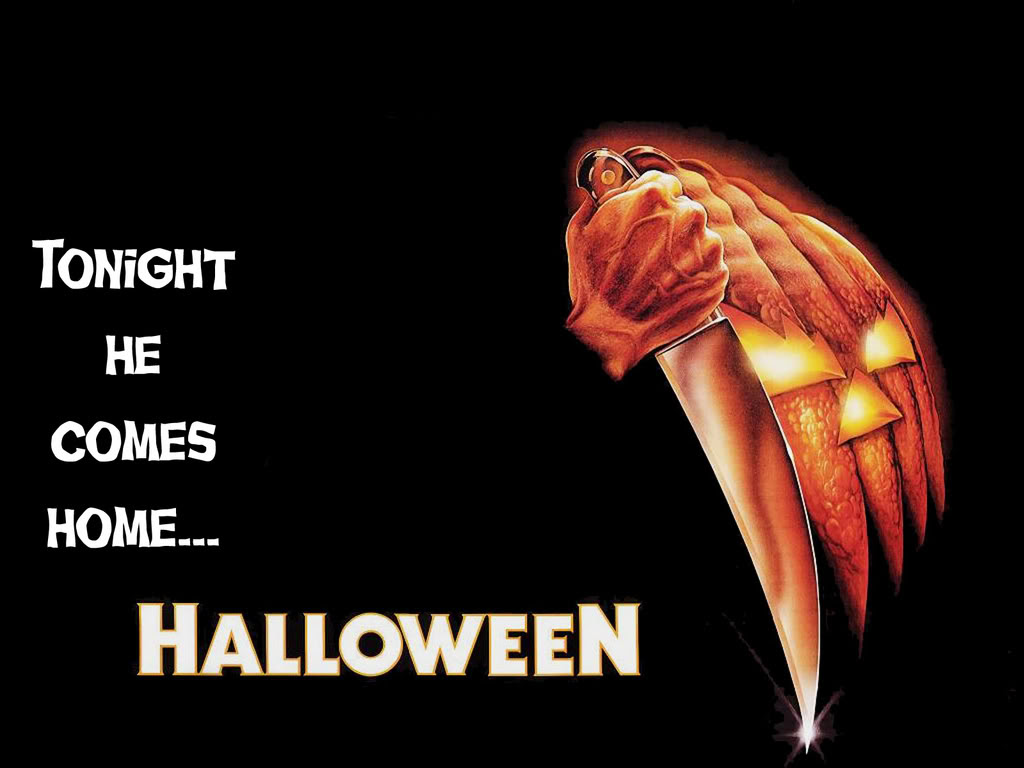 Some of the musical cues are still freaky, but this movie doesn’t scare me. It does quite the opposite.

I’ve mentioned before in this blog how the earliest videotapes my family had were the movies we watched time and time again. Halloween was recorded right after The Karate Kid. When we wanted to watch Halloween, which was often, we would inevitably see the last shot of The Karate Kid, then the credits would get going with some cheesy 80s triumphant score going, and then abruptly, it would turn to the Halloween theme—the recording of these things was not very precise—and we were off. The lights would be out, maybe there would be popcorn...

Had to go make some popcorn quick. But, I am back.

And, while I was waiting for the popcorn to cook, I happened to notice something new. Always a treat in a movie this familiar. Sheriff Bracket smokes a pipe, sticks it in his mouth just after talking to Laurie. No particular meaning to it, probably just the actor wanting to add something unique to his character.

It occurs to me that in all those years of watching this movie as a kid I didn’t realize what Annie and Laurie were smoking. I don’t remember when I first got that. And, I only just realized why Laurie thinks Annie’s dad smelled it. She’s paranoid.

I’ll probably mention it in more detail when I get to Halloween II, but I saw part of that one filmed. It’s one of my earliest memories, I suppose, since I had to have been four or probably just turned five.

I still quote dialogue from this movie on a regular basis. And—if my sisters Bobbie or Brooke are reading this, they should appreciate this—once, when we were getting out of our family car that had a sun roof, our mother had neglected to close the roof but had turned off the car. Bobbie said, “Roof. Roof.” Sounded a lot like a dog barking—you got to know that for the punchline to make any sense. I responded, “Mom, Bobbie’s barking again and getting on my nerves again.” Seriously, this movie is like a cinematic branch of the family. We’d watch it, we’d have friends over to watch it. It didn’t have to be October.

It was a videotape recorded in EP, three movies on the tape, and we’d watched it so many times that it was a horrible copy after a while. It got hard to make out some of the details, like when Michael is standing in Laurie’s neighbors’ yard, Michael pretty much blended right into the white sheets hanging there.

I’m trying to remember if we had any other horror films on tape back then. I mean, we had Halloween II at some point, and watched that probably almost as often as Halloween. But, I’m not sure what else we might have had. We didn’t see the Friday the 13th movies in theaters or have them on video until much later. While I would see some of those on television, I wouldn’t see one on the big screen until Jason Takes Manhattan. Similarly, the Nightmare on Elm Street films. I don’t remember why, but we saw the beginning of the first A Nightmare on Elm Street at a drive-in and left not that far into it. About the time Nancy had fallen asleep at school. The image of her friend in the body bag stuck with me. But, I wouldn’t see the rest of the movie (or any of its sequels for quite a while). I wouldn’t see a Nightmare on Elm Street movie in the theater until Wes Craven’s New Nightmare. Saw that one for free at a test screening.

(More on that movie in a couple weeks.)

Never saw a Texas Chain Saw Massacre film in the theater. Or an Evil Dead movie (well, the recent remake, I did). I did see Slaughter High in the theater, and probably some other horror films. Slaughter High was a double feature with Return to Horror High at the Academy Theater in Pasadena—pretty sure that was when I saw the trailer for Evil Dead II with the quite memorable bit with someone stepping on a head, the eye popping out, flying across the room and into someone’s mouth—same theater where I saw Jason Takes Manhattan a few times. Same theater where we would see Halloween 4: The Return of Michael Myers twice in one day. We’d see it opening weekend at the Pacific Theater in Hastings Ranch, but would see it again at the Academy.

I guess a lot of the horror films I saw as a kid were either on television or rented from the Warehouse.

Get to my teenage years and into my 20s, though—from then until today, I’d see many a horror film in the theater. In the 90s, I would also rent a whole lot of horror films from Blockbuster or an independent rental place called Now Playing. For a short time, when I’d work Saturday nights as a parking attendant, I would walk to Blockbuster just before they closed, rent 3 to 4 movies, usually all horror films, and watch them until dawn, then go to sleep. Or my sisters and I would rent whatever horror film we hadn’t already seen from Now Playing. We rented everything they had from Full Moon Video—stuff like the Puppet Master or Subspecies series. We also made our way through the Witchcraft series, which became increasingly bad as they went.

Sorry if I didn’t say much about the film itself. It’s the kind of movie I figure everyone reading this has seen already, anyway. (If you haven’t, come on by sometime and I’ll watch it with you.) Plus, I’ve written about it before and will mention it again in the coming days.

Anyway, tomorrow another slasher series gets started. I’ll try to write more about the movie, and less about my nostalgia for a childhood full of movies (horror and not).