the bastard son of a hundred maniacs

Sleep.
Those little slices of death.
How I loathe them.
— Edgar Allan Poe

So begins A Nightmare on Elm Street 3: Dream Warriors.

Gotta remember this quotation from Edgar Allan Poe, too:

The death then of a beautiful woman is unquestionably the most poetical topic in the world...

The slasher film, of course, shows us the deaths of numerous beautiful women, but really it’s all about that final girl, the one who will get away. The homicidal pursuit works as a surrogate for a sexual one. We want the girl, but we settle for wanting her dead. Thing is, we get neither of these things. The slasher film is inevitably a disappointment for the males in the audience, but also something quite the opposite. It’s like a gift to the id in us all—but especially the supposedly heteronormative males—twisting our lust and our longing to kill into one primal urge.

The obvious question then: why do females like the slasher film? Karanovic (2012) suggests, “For the women, it may not be sexual, but maybe the pleasure of avenging someone who may have treated you badly.

Or women may not receive any sort of sexual pleasure in seeing another women [sic] tortured or slowly killed for the pleasure of a male, but may find some intellectual puzzle in figuring out how to escape. There is also the possibility that women watching the film are intended to implore a lesbian gaze, and idea discussed by Reina Lewis in her piece Looking Good: The Lesbian Gaze and Fashion Imagery. Lewis describes the gaze as narcissistic in that the female viewer is not just admiring the female actress but imagines being desired like her as well. “As I gaze at the model, I may simultaneously at a fantasy level desire to be like her, and desire to have her, and, moreover, desire to be, as she is, the recipient of another woman’s desiring gaze” (Lewis 95), she says describing the experience of looking at a female model. Interestingly enough, many heterosexual women admittedly attend movies for the pleasure of seeing a female actress that they find attractive. Lewis additionally points out that in a society where media texts predominantly objectify women, women of any sexual preference will take part in some sort of lesbian gaze.

I think I’ve quoted this line from near the end of Karanovic’s piece before:

While on the one hand, male viewers can indulge in sexual fantasies, violence, and experience fear, they can also learn that being a strong man is what get’s [sic] you out of a bad situation, all while enjoying the view of beautiful women.

The idea that the slasher film is all about sex—it’s not a new idea. But it is still an important one. Just look at the Freddy’s attack on Joey in this film. A female nurse lures the boy into a room, strips then climbs on top of him. They kiss. But, she bites his tongue, yanks it out and uses his elongated tongue (and three more) to tie him to the bedposts. It is overtly, and quite literally, sexual. And, given Freddy’s gender, it is really a homosexual scene.

(A nitpick that has nothing to do with sex: doesn’t the ending of the original A Nightmare on Elm Street mean none of Nancy’s friends were ever killed by Freddy? This film treats the events prior to that ending as story fact. Of course, maybe we’re in another one of Nancy’s dreams, or maybe we cannot rely on the ending of a slasher film to make sense when the story sequence continues into a sequel. The first couple Friday the 13th films end with scenes that later make no sense. And, the Nightmare series is, of course, predicated on the dreamlike nature of much of what we see onscreen, even the scenes that are not (supposed to be) dreams.)

Keep in mind, Freddy has made the knives a part of him, fashioned a glove to act—in Cloverian terms—sexually where he could not before. It is no mistake that Freddy, prior to all of this, kidnapped and presumably molested children. He is a character who cannot act out his sexual urges in normal society, and even after his death, he is still acting out sexually. He attempts to eat Kristen in this film, an on-the-nose sexual attack. 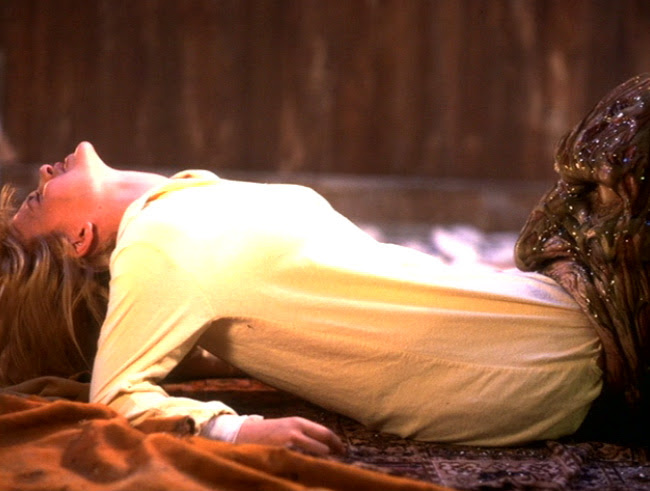 In the previous Nightmare installment, the sex act itself was interrupted by Freddy’s attack. And, now, with Joey, Freddy is effectively emasculating himself—or demonstrating his lack of normative masculinity at least. (Sidenote: in the remake of A Nightmare on Elm Street, Freddy is portrayed by Jackie Earle Haley, whose immediately previous film role was as a child molester in Little Children.)

See also Taryn’s death scene, in which Freddy penetrates her with needles instead of knives, because she used to be a junkie. They both feel the pleasure of that moment. The sexual euphoria.

And, to think, I had intended to write about masochism today. Freddy does so love to injure himself.