all the great ones leave their mark

Immediately I must wonder if Kevin is as bad as Doyle from Dutch. Or he will be, as he is already prone to violence. Despite his badness, though, the movie does a good job of setting everyone else against him. It’s his fault, but you can almost forgive him because he is a kid.

As for the movie, Home Alone is not a movie I would normally equate with having much depth... Then again, neither was Planes, Trains & Automobiles or Dutch or just about any of the slasher films I watched in October. But, I suppose the point to this blog, quite often, is that every film has depth. Even the most shallow-seeming, simplistic piece of entertainment tells us something about us for watching it, if nothing else.

I am not suggesting that Home Alone is the most shallow-seeming film. There are plenty of films shallower.

This film does a great job of setting up later scenes early on. The old guy with the shovel is introduced right away, as is one of the wet bandits, posing as a cop. When Kevin explored the house after he wakes up to find his family gone, he goes into the basement, among other places, and we see all the decorations and the mannequins—regarding those mannequins, they sit next to a sewing machine and some sewing patterns, just to excuse the presence of mannequins, which it never occurred to me in all the times I have seen this movie before just did not seem to belong in a suburban house.

Suburb of Chicago, by the way, because we did not have enough Chicago with Planes, Trains & Automobiles or Dutch.

I have not watched this movie for a while, and I am trying to figure out the deeper points within it. Kevin calling himself the “man of the house” then going outside to announce he’s not scared only to be frightened back inside by the old guy with the shovel—that’s probably worth a discussion or two, something about gender maybe if I feel like a stretch, definitely something about the ills of society, fear of the unknown or something.

Obviously, the movie is about Kevin figuring out (similar to Doyle in Dutch) that he really does need his family. Meanwhile, Kate McCallister’s trip home echoes some of the beats of Planes, Trains & Automobiles. As I said yesterday, Thanksgiving and Christmas movies are all about needing family. Or is it John Hughes movies?

(I read on IMDb that Dianne B. Shaw (aka unnamed nurse from Groundhog Day was in this movie, at the Scranton airport, but the airport bit is done and I missed her. Maybe tomorrow. But now, Ken Hudson Campbell (aka Chubby Man from Groundhog Day) is on screen as “Santa Claus.” Casting circles around Chicago are small.) 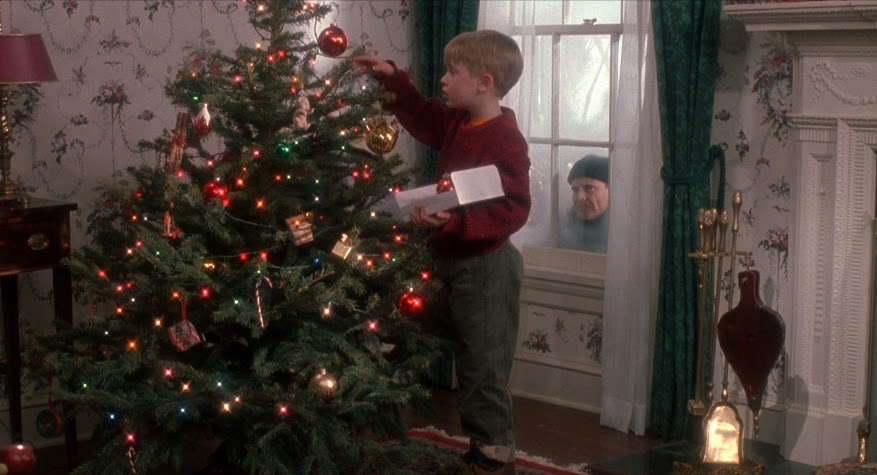 A. the story is very straightforward. Boy gets left behind and while his mother tries to get home to him he has to fend off some burglars.

2. the zany antics and cartoonish violence run right along the line between realism and utter nonsense, just enough to be entertaining but not abhorrent (as some of the details in Dutch were).

D. the bit with the old man makes for a much stronger (and strangely more fitting) emotional beat than the likes of that scene in the shelter in Dutch.

Good story, cartoonish action and a nice emotional center—add some jokes and a likable child star and the movie couldn’t fail. Especially, with John Hughes behind it.