Maybe Kevin isn’t the devil (or a Satan-Figure, anyway). But, he might be homicidal.

I’ve got before me two different looks at the injuries he causes in Home Alone, plus... well, I will get to the plus after the injuries.

First of all, both Hansen (2012), who spoke to her friend Dr. Ryan St. Clair at Weill Cornell Medical College for her analysis, and Fee (2013), who apparently just relied on Google (which is what I would have done if this movie was lasting me longer than a week), start with Marv getting shot in the face. I guess Harry getting shot in the... well, somewhere in the crotch region, maybe his testicles, it’s difficult to be sure. I guess that injury doesn’t matter. Hansen (presumably quoting St. Clair) points out that the BB gun probably had a muzzle velocity of 350 feet per second so it may have broken the skin, but would not have penetrated the skull. Fee, on the other hand, found at least one case in which a face injury with a BB gun was fatal.

(Neither one points out the oddity of Kevin even being there on the floor in that moment in the first place, as if Marv putting his head through the doggie door was the obvious response to Harry getting shot. I mean, the door is unlocked, as we see later when Harry opens it and gets his head burned, so the obvious response to a gunshot that was clearly not of a significant caliber should have been barging in through the door and taking the kid down right then. But then, this movie would not be very kid friendly.)

Fee suggests that Marv’s fall down the basement stairs could have resulted in head or spine injuries. “While it could be severe,” he writes, “more than likely he’s looking at bruises and possible bone fractures.” There is no mention of Harry’s fall down fewer stairs. Really, given the right angle on the landing, either fall could have done serious damage. But, either fall could have also resulted in a few bruises. Or a bloody nose. I fell down the stairs in the house in which I grew up more than once, and I remember getting a bloody nose out of the deal at least a couple times. Hansen glosses over the stairs altogether.

(Sidenote: does Kevin somehow get all that ice off the stairs by the next morning? Or are the entire family lucky they didn’t fall down the front stairs like Harry did?)

Marv getting hit with the iron in the face, Hansen tells us, estimating the distance the iron falls at 15 feet and the iron’s weight at around 4 pounds, “is a serious impact, with enough force to fracture the bones surrounding the eyes. This is also known as a ‘blowout fracture,’ and can lead to serious disfigurement and debilitating double vision if not repaired properly.” Fee agrees, the iron hit, “would almost guarantee facial fractures and broken bones.”

Harry’s burn from the doorknob, Hansen tells us, should be far worse than what we see. The glowing doorknob, to be glowing visibly, would have to be heated to

about 751 degrees Fahrenheit... The temperature of that doorknob is not quite hot enough to cause Harry’s hand to burst into flames, but it is not far off... Assuming Harry doesn’t lose the hand completely, he will almost certainly have other serious complications including a high risk for infection and ‘contracture’ in which resulting scar tissue seriously limits the flexibility and movement of the hand.

Amusingly, Hansen (or, rather, St. Clair) adds, “Kevin has moved from ‘defending his house’ into sheer malice, in my opinion.” Fee basically agrees regarding the doorknob and how Harry would need immediate medical attention.

Harry getting a blowtorch to the head, Fee says, estimating the temperature of up to 3500 degrees, and citing medical dictionaries, would result in “third-degree burns that would destroy the dermis and epidermis, as well as the fat, muscle, and bone.” Hansen/St.Clair specifically notes how Harry keeps his head in the flame for about seven seconds and that would make what could have been “a simple second-degree burn [into] a full thickness burn likely to cause necrosis of the calavarium (skull bone).” Hansen adds, “That means the skin and bone tissue on Harry’s skull will be so damaged and rotted that his skull bone is essentially dying and will most likely require a transplant.”

Hansen skips the nail in the foot, and Fee, inexplicably puts it after the ornaments. Fee, though, sees this injury as something far worse than I think it appears. I’ll let him speak for himself:

How this scene made it into a PG-rated movie, I will never know. We watch as Marv loses his shoes and socks from the tar on the stairs and then proceeds to step on a nail that buries itself several inches into his foot before he screams and tumbles back down into the basement.

Where do I begin? I will go backward. D) The nail neither goes “several inches” into Marv’s foot, nor do we see it do this. I watched this in slow motion just to check, and Marv’s foot does go low enough that the nail should have penetrated most of the way through, but Marv’s foot is not several inches thick. 2) Nor do we see Marv lose his shoes and socks. The camera pans up past his already left behind shoes then his socks (the second one just coming off.and up to his bare feet. (I actually wondered if the tar would even be so sticky when it’s winter in Illinois, but then I remembered this is the basement, where the furnace is.) A) So, this scene gets into a PG-rated movie because we see no real penetration and absolutely no blood. Still, had the nail penetrated the skin, it could result in tetanus and Fee adds, “Who knows if Marv’s jaw would have become locked from that or from the other facial injuries he received.”

Marv climbs in a window and steps on Christmas ornaments. Fee calls this “a minor injury compared to the trauma Marv and Harry have suffered from the other booby traps.” St. Clair agrees, saying, “Walking on ornaments seems pretty insignificant compared to everything else we’ve seen so far. If I was Marv, I’d be more concerned about my facial fractures.” I actually wonder if the tar on Marv’s feet, especially cooled by walking in the snow, wouldn’t have helped him a bit with the ornaments anyway.

Neither Hansen nor Fee think the micro machines—

(Those cars do not appear to be micro machines, by the way. I had micro machines. They tended to be a little more squished, like a matchbox-style car had been squeezed into a smaller space, retaining all the detail but becoming a little shorter, a little fatter looking... 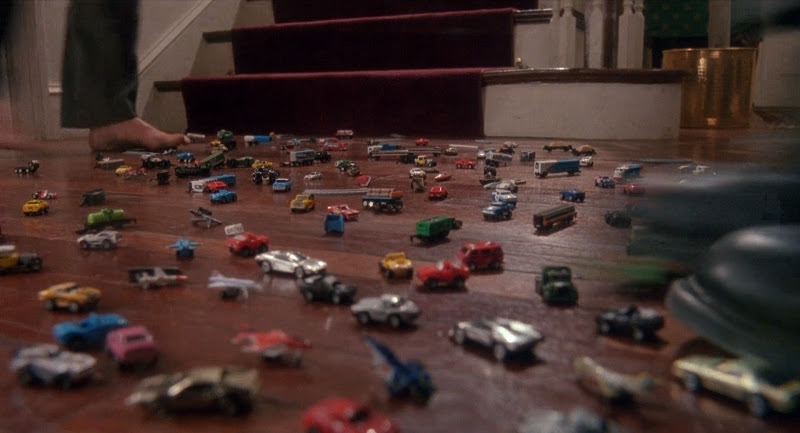 Actually, a freezeframe shows that some are probably micromachines, while some clearly are not. Of course, the mess after the fall seems to also include other things like LEGO blocks.)

—on the floor further injuring Marv’s feet and sending both Marv and Harry onto their backs worth mentioning. (Well, Hansen mentions it, but apparently St. Clair had no medical detail to add so it is only in passing.) Considering they had both already fallen down stairs, and they’ve both got bruises and fractures, presumably, these falls would definitely exacerbate everything.

Then comes the paint cans. St. Clair approximates the length of the rope—nevermind that it is string—at 10 feet (when it is probably more like 6-7 at the most), the weight of the cans at around 10 pounds (Fee, puts them at about 9 pounds, but close enough). I have no idea how you do the math here, or how the string actually being shorter than 10 feet would alter it, but St. Clair puts that hit to the face at 2 kilo-newtons, whatever that means. St. Clair calls that “easily enough to fracture multiple facial bones, and [it] is probably going to knock you out cold. Also, I wouldn’t expect either of the Wet Bandits to walk away from this with all of their teeth.” Regarding that last detail, we know Harry loses his gold tooth, but the film does not tell us that Marv lost any.

Neither Hansen nor Fee mention the fall outside, swinging into the house’s brick wall. I’m guessing that would result for sure in some bruises and, depending on the exact angle of the hit, maybe some fractures.

Hansen does include Old Man Marley’s hitting Marv and then Harry with his shovel. St. Clair’s response to this injury is hilarious:

Seriously? At this point, Marv and Harry have both suffered potentially crippling hand and foot injuries. Harry has proved to be nearly impervious to burns, and both managed to retain consciousness after taking a flying paint can straight to the face. Suddenly, a frail elderly man appears and weakly slaps them in turn with a flimsy aluminum Home Depot snow shovel. And, somehow, this is too much for them, and they collapse. This movie was way more believable when I was 8.

I will not nitpick by pointing out that even half-Christ-Figures can probably get some serious force into a shovel hit if they want to do so, but I will

Fee ends by pointing out that we don’t know the pain threshold of either Harry or Marv—I suppose, given all of the information above, we do know—but “it’s safe to assume that after this Saw-like night of torment, jail would be a welcome escape. After a well-needed hospital visit of course.”

That comparison to Saw leads me to... well, tomorrow.