(Prior to writing this entry, I wrote an entry for my SE7ENTH ART movie blog on the new movie Whiplash—comparing it to a romantic comedy if you must know—and I just finished watching Bad Santa. Despite its blatant disregard for decency, that movie—Bad Santa—has a lot of... heart to it, the kind of thing you expect from a Christmas movie. And, oddly, I think it involves the actual holiday

(I don’t mean the literal day, of course, even though Home Alone barely gets to it and Christmas Vacation never makes it there. I mean, the setting is less arbitrarily Christmas... Well, that’s unfair to Christmas Vacation, I suppose, what with its focus on the whole capitalism thing and the Christmas gifts, even if we don’t get the denouement of anyone actually receiving gifts—

(Hell, maybe that’s my problem with Christmas Vacation—not to harp on that more as A Christmas Story gets started; it’s not about the giving of gifts, per se, or the receiving of gifts, either. It is somehow about the spending of money without the actual gift exchange. I asked my daughter recently what a Christmas movie should be about and she said something like, “It should be about how giving is just as good as receiving.” And, I get that. The gift exchange is central to Christmas. Whether or not that should be the case, it is the case. But, that doesn’t have to mean the point is getting gifts or spending money or whatever particular detail we could paint negatively. It is about giving. The biblical story that comes with Christmas even includes gifts.)

... and that sentence was so long ago, let us start over. Oddly, Bad Santa involves Christmas more than other supposed Christmas movies. Bad Santa is more explicitly about Christmas than, at least, Home Alone. Today’s film... Let us get out of this parenthetical.)

A Christmas Story, unlike some other supposed Christmas movies, is about Christmas, especially inasmuch as it is about nostalgia for Christmas past. And, since the movie itself is over three decades old now, even watching the movie (as we do every Christmas) is nostalgic, even before you get into the movie itself, looking back another four decades to a wholesome fantasy of Christmas and childhood and family.

I have seen this movie once a year for several years now. I’ve said before, I didn’t have Christmas as a kid. There might be some that would put the origins of my cynicism and pessimism there. Like my childhood was lacking something necessary for a healthy adulthood. It probably was, but I don’t think it was Christmas. But, that’s an issue for another day, or a visit with a therapist.

The innocence inherent in a story where boys’ misadventures result in tongues stuck to poles rather than, say, violence—I’m comparing this to Stand by Me in my head—is impressive for a film coming out of the early 1980s. Scut Farkus and Grover Dill have nothing on Ace Merrill. 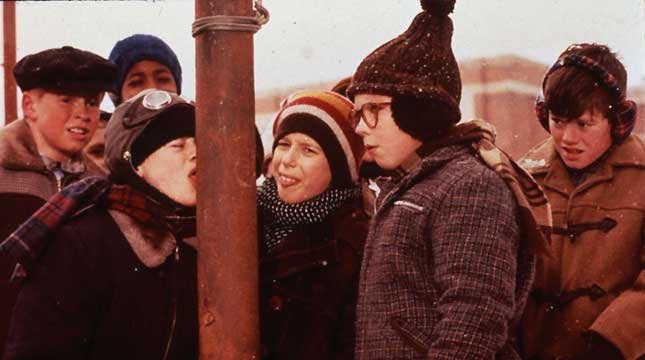 As A Christmas Story plays, a distraction comes to me. In that other blog entry I wrote tonight, I wondered if all stories were inherently the same. Are all movies inherently the same, just a handful of story types, a handful of themes. I’ve seen so many movies in my life, and each one is unique. And yet, so many aspects of movies are the same. Like the days of our lives, or, given this blog, say the days of Phil Connor’s life. Each film is just another iteration of the story of what it is to be human... except maybe stories about animals, but really those too. In one draft of the prospectus for my Master’s Thesis I wrote:

The community in question here will be that of long-form bloggers, whether or not they actively create a concrete community by interacting. They are necessarily part of a shared community, even if they make no effort to maintain it as one singular unit. And, they are human, living a human experience. Garfinkel (2002) tells us the point of ethnomethodological research is “to discover the things that persons in particular situations do, the methods they use, to creat the patterned orderliness of social life” (p. 4). The situation here is a dual one—blogging and going through a life crisis. In a way, my blog is already doing these things, making sense of a life that seems out of control to reestablish a sense of order. We all want to make sense of our lives. (Black, 2014, p. 16)

Probably quoted a bit too much there to make my point, but then again, maybe that last line is the ultimate point here. We are all inherently the same. The differences are just in the details. What my point was going to be is... and I admit there is some writing there that isn’t as formal as it should be for a scholarly piece, but I’ll get to that in new drafts. My point was to mention that one of the professors on my committee highlighted “they are human” and in the margin she wrote, “Who isn’t?” On the one hand, well, yeah, duh. We’re all human, in a general sense, but that doesn’t mean that we are not constantly defining and redefining what that means. Defining what it means to be human is not what my thesis will be about, but I’m not sure it is flippant or immediately dismissible to point out that, in this instance, bloggers are “living a human experience.” I think of Phil Connors, repeating the same day over and over and over again, each day the same except for what he makes of it—Hannam (2008) got a whole book out of that, and I’m sure many “self help” books revolve around the same idea. Life is what you make of it. Sure, circumstance makes it harder for some people than for others, but on some level, the experience of life is subjective, controllable. Arguably.

Coming back to A Christmas Story, I may not have had Christmas growing up, but I can still relate to this story. The details just don’t have to match our lives for a particular movie to work for us. Groundhog Day, Bad Santa, Home Alone, Black Christmas, Whiplash, Christmas Vacation, A Christmas Story... any movie, every movie.

Kinda makes this blog a little pointless, I suppose.

But, it also makes it the most important thing ever.

At the same time.