what the hell have we gotten into, here?

A few questions must be answered before moving on to bigger things. For example, the obvious one: why Christmas?

(And, I need to get my nitpicks out of the way early with this movie because they are actually few.)

Shane Black has a tendency, as it were, to set movies around Christmas (from Lethal Weapon to Kiss Kiss Bang Bang to Iron Man 3). Ivan Radford at Vodzilla last year, said it like this:

In 1987, Lethal Weapon blew Christmas wide open. It turned out that Christmas films didn't just have to be festive and feel-good; they could be both of those things and feature guns, swearing and prostitutes too. Happy fucking holidays.

Christmas is fun. It's unifying, and all your characters are involved in this event that stays within the larger story. It roots it, I think, it grounds everything. At Christmas, lonely people are lonelier, seeing friends and families go by. People take reckoning, they [take] stock of where their lives are at Christmas. It just provides a backdrop against which different things can play out, but with one unifying, global heading. I've always liked it, especially in thrillers, for some reason. It's a touch of magic.

Riggs is one of those lonely people; in the script he picks up a hooker just to watch some TV with him. But, really, his root is the job, not the season. I think what the Christmas setting does here is not so much root the events of the film in something larger but in something quite small and singular. These are two specific cops involved in a specific case at a specific time in a specific place. It mitigates the larger story, rather than root in it. The larger story is something like the suburbanization of crime, the drug trade leaking out from the inner city. By focuses the story so exactly, the inherent danger of the situation is isolated.

(Amanda Hunsaker's autopsy happens way too fast. Morning after she jumped to her death, they've already done it. Don't think so.)

Another question: why Family Feud?

You probably didn't even noticed this one. I only noticed it because I just started reading Black's script today and it's actually in the script that Family Feud is on Riggs TV when he wakes up in the trailer at the beginning of the film. I'm guessing that Family Feud is something domestic. Plus, it's a sort of foreshadowing what is to come. Hunsaker's "family" is going to come after Murtaugh's.

(Using a helicopter when you're killing someone seems like a bad plan, unless you've got a ship far enough on the coast that no one can follow you. Helicopters have IDs. They are trackable. They make noise. You don't sneak up on people unless you've got that Blue Thunder helicopter, and this one is not that. Right before the helicopter arrives, Riggs is shown to be outside. He should have heard it coming. And as good a shot as he has been shown to be, he should have done some damage to the helicopter or the people inside.)

(Secondary nitpick: Hunsaker just happening to be drinking some egg nog when he gets shot is a lame movie gag. Give us some egg nog spurting instead of blood. It's cheap.)

(Tertiary nitpick: First, they use a helicopter, which should not have worked. Then, they come to kill Riggs on the street. Nevermind that they have no way of knowing his location right then, they might as well have used the helicopter again. They speed in and screech to a stop before shooting. Mr. Joshua needs some driveby lessons. Drive in slow, along with the rest of the traffic if there is any, don't draw any attention to yourself, then just take the shot.)

Another question: Why the cat and why the dog?

Symbolism, of course, though a little twisted. The cat Burbank as the domesticated animal. Riggs' dog, which in the script is a stray that kind of adopts him in a scene before the Christmas tree lot, is something more like Riggs, a little too dirty to be domestic. But, clean enough--it's hardly a mutt--that you can imagine it once was.

(A question, and perhaps a nitpick: why does Amanda Hunsaker have a twin sister? To be fair, the movie does not tell us that she does, but her father mentions have another daughter and in her yearbook, we see a Beverly Hunsaker next to Amanda. Now, that doesn't mean they have to be related, but considering the character's last name in the script is Lloyd and presumably was changed to Hunsaker to be more unique, I think whoever made the prop is telling us that Amanda and Beverly were twins. But, does this matter to the course of the movie? If we never meet Beverly, never see that she, you know, did not get into drugs and pornographic tapes, then there is no comparison to be made.)

Another question: Why Vietnam?

Except I already sort of answered that one yesterday. This movie like many an 80s action movie is part and parcel of the tail end of the Cold War. I will be making this argument all month, I bet.

There are lesser questions, of course. Does Murtaugh just have a boat because he's preparing to retire? Why does Riggs wipe off his gun before pointing it at himself? Considering the Family Feud thing, why is Looney Tunes playing when he puts the gun in his mouth? And a potentially bigger question that might need to be answered another day: why do they take off Rianne's clothes between the dry lake and the club?

(The final nitpick--and it's a big one--is that, well, Riggs really has no reason to not be suicidal anymore at the end of this movie. Murtaugh asks him if he's crazy or really as good as he says he is. My problem is that these two are things are not antithetical; he can be both. In fact, I think he very much is both. He is suicidal, he is crazy, but he is also pretty damn good at what he does... because he is crazy. It's actually a little strange, really, that being quick to pull his gun and use it means Riggs is crazy; in 80s action movie terms, that is practically normal. But, in this story, Riggs' approach is supposed to be extreme, supposed to be a sign of his insanity. And, he tells Murtaugh that killing people was the only thing he was ever good at. He was messed up before he was married, messed up before he lost his wife. Now, he's just got nothing to lose. 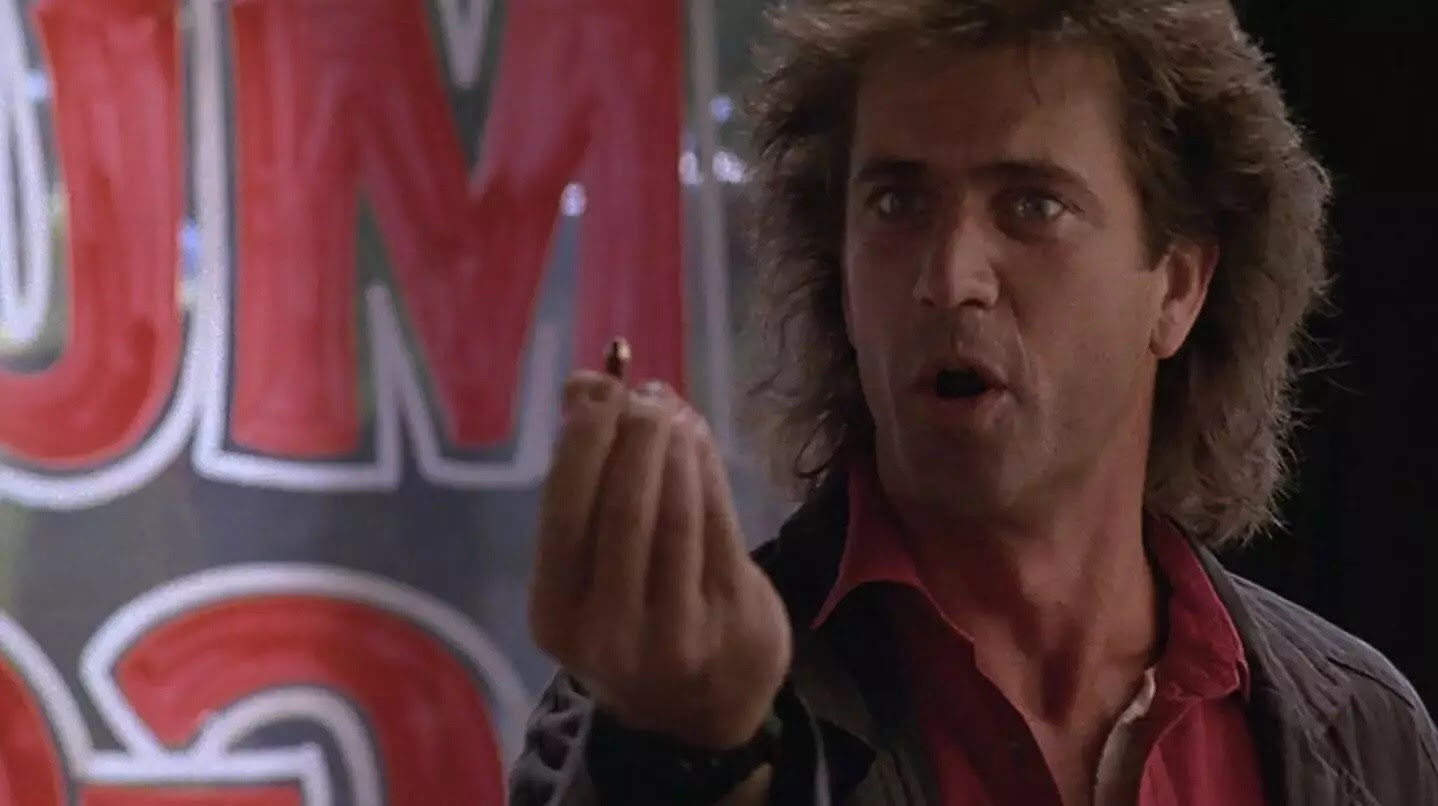 We can presume that Riggs has grown attached to his new partner and his family--and I think that's what we do. The movie does not give us enough reason to believe this has happened. The day they get tortured, the day that ends with Riggs' fight on the lawn with Mr. Joshua--this is only their third day as partners. Riggs should not be leaving his bullet for Murtaugh. Maybe he feels a little better about his life now that he's got a partner willing to work with him (or so it seems, at least), but suicidal thoughts don't just go away like that. His relationship with Murtaugh is a rebound at best. Riggs is going to be missing his wife again soon enough. Hell, by Shane Black's own logic--and remember, Riggs is his brainchild--a lonely person like Riggs will feel lonelier upon seeing that family together... well, there's some mitigation, I suppose, in him being a part of this one. Cinematic shorthand has demonstrated that the family has accepted him.

But, if we assume that Riggs was suffering from actual depression, that he was actually suicidal--and his gun in the mouth scene was him alone so cinematically it is presenting truth--then the transition to where the movie is telling us he is at the end, after only 2-3 days--that is dismissive of real mental illness.)

Now, on with the positive--