i think i'm an eighties man

Start us off with "Jingle Bell Rock" and we know it's Christmas time. Give us a half naked woman who seems a little high and we know... What do we know? Close on the cocaine she snorts and Christmas lights reflected off the glass of the table, and Christmas becomes a setting for something twisted. And, we don't even have dialogue yet in this, one of the greatest Christmas movies ever--Lethal Weapon.

Character introductions: Roger Murtaugh (Danny Glover) introduced naked in a bathtub, his family comes in to wish him a happy birthday. Martin Riggs (Mel Gibson) also introduced naked. Nakedness is important. Present us with dangerous men at their most vulnerable and we should know there is something a little different going on here than your usual cop movie. I think of movies like the Dirty Harry films or the Death Wish films. The suburban life of one of our leads is one notable difference. The lonely trailer life of the other... I'm trying to remember if we ever saw any of the home life of Paul Kersey or Harry Callahan. There was some life outside the police station, of course, but not--I'm pretty sure--the domestic... bliss of Murtaugh's homelife.

Next we see Riggs, he's trying some cocaine himself. We haven't actually been told he's a cop yet. Come into this movie blind and his revelation here would work on the audience as it works on the drug dealers. Then, home for a little contemplation of suicide. Riggs is damaged as Callahan or Kersey surely would be, but the movie doesn't just point it outward. 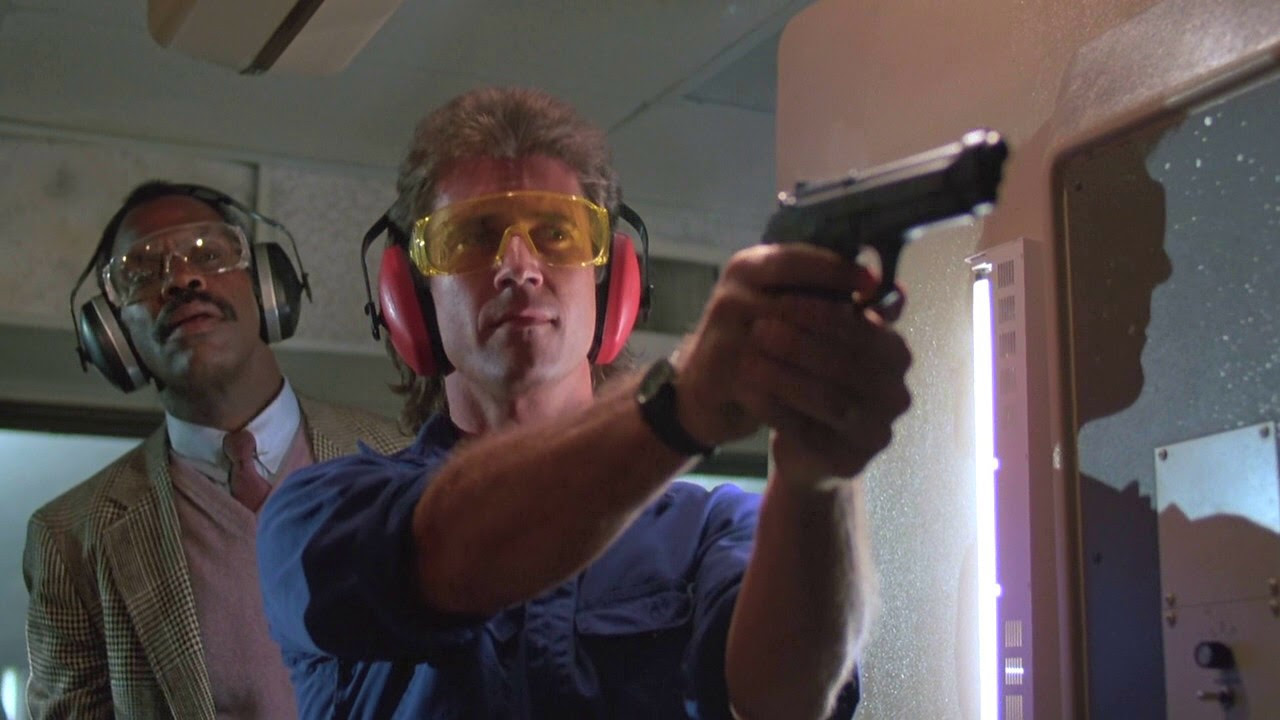 A great bluesy score, a lot of inexplicably wet streets at night, and a romantic comedy-style setup with the "meet-cute" in the police station. Lethal Weapon is one of the definitive 80s action movies, and the definitive "buddy cop" movie in my opinion. Out March 6, 1987, a week after A Nightmare on Elm Street 3: The Dream Warriors, the top box office list for that weekend is a whole bunch of movies familiar to me.

Lethal Weapon at #1. Saw that opening weekend on the big screen. That second Freddy Krueger movie at #2. Wouldn't see that one until much later on TV. Platoon at #3 in its 12th week of release. Saw that one opening weekend on the big screen. Angel Heart at #4. Wouldn't see that one for a few years, would write a paper partly about that one for my Magic and Witchcraft anthropology course at USC.

(For the record, that paper would also include Live and Let Die, The Believers and The Serpent and the Rainbow. It was a paper about the representation of Voodoo in film. Writing that paper I would watch Angel Heart for the second time after having watched it previously at my sister's house. Watching movies I wouldn't otherwise have seen with my parents--which actually wasn't that many movies--at my sister's house was... well, not a regular thing, but a thing.)

The point is, as I have mentioned before I saw a lot of movies as a kid (and as an adult). I saw Lethal Weapon (pretty sure) at the Mann 3 theater in Hastings Ranch. Second time I saw it was a little more interesting--in a tiny little theater inside the front end of a ferry between Ireland and England with the boat rocking on some big waves.

(Interesting movie connection: Hunsaker mentions working with Air America during the war. A few years after this Mel Gibson would star in the Air America movie.)

(More meaningful movie connection: I'll get into this more in a few weeks with Rambo but repeated references to "the war" are not just a coincidence in timing for a movie like this. Like I have argued that slasher films were born in part as a response to the feminist movement, I must argue that 1980s testosterone-filled action movies were born as a response to the Vietnam War; Siskel and Ebert called movies like Missing in Action and Rambo and Uncommon Valor the "this time we win" films. For the first time, America had lost a war. Sixties counterculture had birthed the swinging seventies and now a challenge to American hegemony and, let's face it, American masculinity--because, surely, if countries have genders, the United States is a cowboy constantly overcompensating for something--meant we had to prove our might around the world and on the silver screen... which also traveled around the world, probably doing just as much long term damage as our soldiers.

Now, there's an idea that could use some backup.

Action films like Lethal Weapon, no matter how intelligent the script, reinforced the American notion that might makes right and a little more force will always win out. We can take a beating just like Murtaugh and Riggs can. We can have our kids taken--it's a daughter here, but it might as well be a son sent off to die on the other side of the globe--and come right back and kill the bad guy.

Like some of the material I'll share regarding John Rambo in a few weeks, Martin Riggs is representative of a certain piece of America. He married in '75 or '76, just after the war ended. And, things probably seemed alright for a while. Then, old darkness reemerged as the Cold War was on the brink of exploding or ending. The only way Lethal Weapon could be more... meaningful as far as that goes, is if Mr. Joshua or General McAllister were Russians. That is an 80s film.)