resolving differences and seeing through the petty problems of family life

Weird trivia found on IMDb: there were only two Christmas-themed movies released in theaters in 1989, this one and Prancer (and Johnny Galecki was in both); and there were three movies with animated openers that year—Honey, I Shrunk the Kids, Troop Beverly Hills and this one.

The animated opening is odd. On the one hand, it gets us in the mood for a little irreverent and cartoonish humor. But, on the other hand, it, in my opinion, distances the film from Santa by injuring him and sending him flying away in a hurry. But, maybe that’s a) accidental (or at least incidental) or b) entirely on purpose to give National Lampoon some breathing room. After all, Santa doesn’t really appear in this movie except a little plastic version that Clark kicks in the face.

This movie leaves Santa to the side—except for Clark’s conversation with Ruby Sue and the flight of Santa and his reindeer at the end of the movie—for something... else. Strangely, this movie does not deal as much in family disputes like Home for the Holidays does. Instead, it’s a hodgepodge of disparate scenes that imply problems more than demonstrate them. In response to the news that her parents will be coming as well as Clark’s, for example, Ellen suggests the two mothers will fight, but we never see them do any such thing.

(An aside: it’s remarkable how quick Audrey is to defend her father when her grandma ridicules his non-working light display. “He worked really hard, grandma,” she says. But, more notable is how the grandfather’s reply—”So do washing machines”—actually makes no sense as a cut against Clark. Washing machines work hard and do something useful. The implication then would be that Clark did something good. Not what grandpa intended.)

Ray Charles’ “That Spirit of Christmas” plays as Clark watches those home movies in the attic—one of the few moments in the film (Clark’s resolve to prove Santa is real to Ruby Sue (which he doesn’t really do, mind you) is another) that goes for sentiment without being particularly silly about it. The lyrics:

I was sitting by the fire side
Taking a walk through the snow
Listening to a children’s choir
Singing songs about Jesus
The blessed way that he came to us
Why can’t it remain
All through the year
Yeah, that’s what I want to hear

And Ellen opens the attic door and Clark falls and the moment is gone.

Now, for obvious reasons—a Christian upbringing that did not include the pagan-derived holidays like Christmas or Easter or Halloween and an adulthood without religion entirely—I don’t go for the Jesus side of Christmas much. Some of the songs are nice—the passion of religion certainly makes for some nice songs from time to time. The capitalist side is kinda nice too, but it’s that first part of the lyrics above that work for me. Christmas Eve in recent years has been a party at my sister’s house, Christmas morning with the wife and kids (though my wife lives elsewhere now—and she’s the one who introduced me to Christmas—we’ve still got a tree and lights and stockings), Christmas night at a party with friends. And for several years now there has been two different speech team Christmas parties as well. Generally, I’m an introvert, but the occasional larger get together works for me. I think it helps around Christmas, with several get togethers that it’s winter break and I’m less stressed by other life stuff. 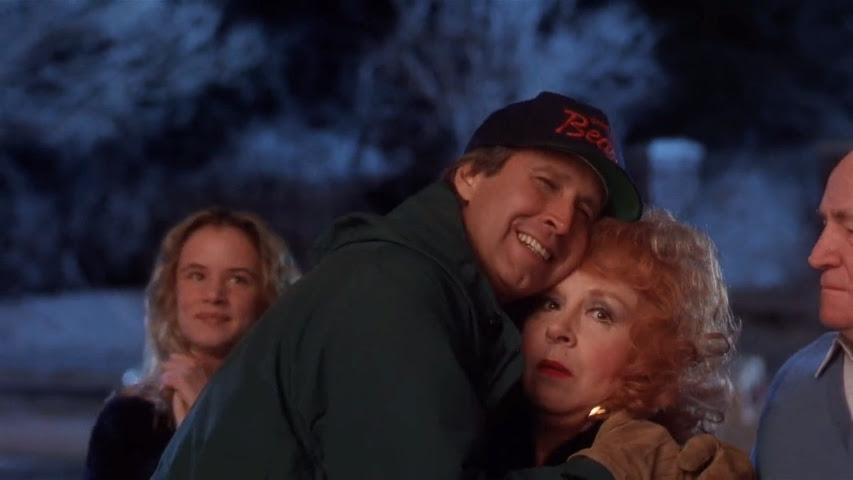 I don’t, however, want parents and in-laws and cousins and aunts and uncles to come stay over, all at the same time.

(Odd coincidence: Eddie asks Clark if his company killed all those people in India. He’s referring to the Bhopal incident, which gets a mention in the prospectus for my master’s thesis. Weick deal with the Bhopal incident in... well here, read an excerpt if you like (or just skip on past it):

...The importance we place—or placed—on certain elements of our environment also affects how we select information for sensemaking. Weick (1988), in examining the 1984 Bhopal pesticide plant leak, for example, explains:

This mechanism is clearly visible in Bhopal where top management assumed that the Bhopal plant was unimportant and therefore allocated limited resources to maintain it. That assumption of unimportance set in motion a self-confirming vicious circle in which worker indifference and management cost-cutting became mutually reinforcing and resulted in deteriorating conditions that became more dangerous. (p. 313)

Weick refers to decisions that led to the disaster, of course, but we can see how placing importance in [one] place can lead to neglect—or in the case of sensemaking, deliberate avoidance—in another. In this case, making sense of the events after the fact, workers at Bhopal could blame the top management for cost-cutting while top management might blame the workers for being indifferent. In the next step in the process—retention—we retain and integrate new information into our existing ideas of the situation. In the Bhopal example, workers and management might find better ways to communicate to avoid the vicious cycle that led to disaster... (Black, 2014, p. 13)

And, that’s enough of that. Except to say, I expect to start some serious work on my thesis soon. Over the next few days, I figure I’ll work on my spreadsheet of blog entries (mine, and those of two other blogs) for coding, and by the time winter quarter gets underway I’ll get to the coding process—with a grounded theory approach, if you know what that means—and get to writing. The defense of my prospectus got delayed, but I still expect that I can have my thesis and all of my coursework finished by the end of spring.)

In the meantime, Christmas Vacation goes on, and Clark mentions how he’s been “a little short with everyone lately” except we haven’t really seen that. It’s a problem with a lot of John Hughes comedies, I think—and I’ve watched two already for this blog—more concern for the laughs than the story. It’s the cartoon thing. It’s why Dutch Dooley can get away with abandoning a boy beside the road, why Neal Page can curse at a desk agent, why Clark Griswold can suggest shoving a tree inside his neighbor... and we laugh.

I laugh too, but I like a good story more.