you shouldn't use that word

Saer is watching Christmas Vacation with me tonight.

Her first comment/question: I don’t get why the intro is animated... It’s weird.

As I have already compared the actions in this movie to a cartoon—Clark falling off the roof, the nuclear power plant gag, and so many others—I think the animated intro actually makes sense. It sets the audience up for what is essentially a live-action cartoon. Physics is not going to matter, if the joke works better without. For example, that chunk of ice in the rain gutter—there is absolutely no reason it should shoot out like it does, but it allows for one more assault on the yuppies next door. (More on the yuppies tomorrow, maybe.)

Saer thinks the Griswolds, especially Clark and Audrey look very 80s. I told her this came out in 1989. She wasn’t surprised. Then, because I was looking at Audrey right then, I realized something—she’s wearing a beret and in European Vacation the whole family got berets (though Rusty’s was thrown off the Eiffel Tower).

Saer: “They’re kind of like the corniest family ever.” Though obviously true, it’s worth noting that this comment came right on the heels of Ellen’s “I don’t want to spend the holidays dead.” 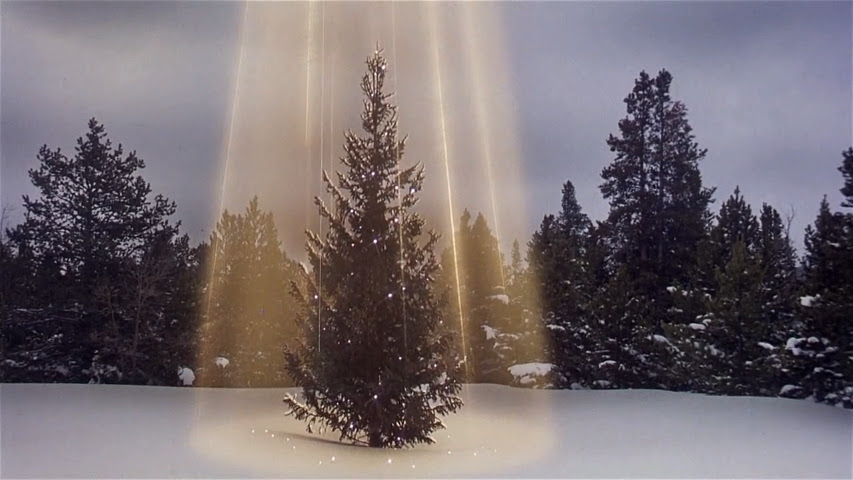 Saer (upon seeing the tree): “This is such a cartoon.”

...who should have learned not to fantasize about other women in the first film. Hell, in the second film, he didn’t. Even when he ended up in bed with another woman accidentally, and she seemed to not be bothered by it, he gets out of there right away.

Saer (in the chaos of the conversation after the grandparents arrive): “I don’t think they enjoy their family.”

Really, they enjoy the idea of family more than the actual thing. I won’t get into that topic again, because I’ve already talked about it, but that may be the point of family getting together on the holidays; we want it to go well because we wish that it would.

Audrey: Are you sleeping with your brother? Do you know how sick and twisted that is?

Saer: She chose that.

An observation: the Griswolds—Clark, Ellen, Audrey and Rusty—actually get along pretty well in this film, and maybe that’s a problem. Saer just called them a functional family, and aside from Audrey briefly complaining about the sleeping arrangements (and calling her brother a fungus when he puts his arm on her because they’re sharing a bed), yeah, they function pretty well as a family in this Vacation installment. All the problems are external, even though the “vacation” is at home.

Saer (in response to Clark crying while watching the old videos): “Ah, he’s so sensitive.”

And: “If he cares about his family so much, why is he such a bad father? Or, a bad husband; I don’t know how his fathering skills are.”

Perhaps, because Clark is imperfect. Human.

In response to the yuppies’ running outfits: “Why are they matching?” Beat. “That’s so... weird.”

The yuppies clink their glasses together and kiss and Saer says, “This couple needs to stop what they’re doing.”

Nuclear power plant gag: “What?! That is so not very realistic at all.”

Clark hugs his mother after the lights work... Saer: “This is so cheesy.”

(For those of you who were not around for the year of Groundhog Day, I “named” one of the supporting characters “Goober.”)

Saer (after Clark talked to his coworker about the Christmas bonus): “I don’t want to support this movie...” And, I wish I could get the rest of what followed word for word. Basically, she just complained that the movie is promoting the need for the Christmas bonus so Clark can get an “unfair” pool. This movie is promoting the rich white guy when “the check should go to poor people so they can have a good Christmas.”

Had to pause because Saer laughed so much at the “Shitting bricks” “You shouldn’t use that word” “Sorry, shitting rocks” exchange. She’s been sick the last couple days, so laughter led to coughing.

Saer: “I don’t think Elfs pay to do that. And, just because you’re a rich white guy doesn’t mean you’re starving in Africa.”

I think her wording got confused there, but she is sick, and tired, but she’s definitely my kid, complaining about the capitalist bit.

Saer calls the turkey scene annoying—she has complained in previous days at the overdone sound effects of everyone eating the dry turkey. But, she rather enjoys Aunt Bethany “saying grace”—laughter and clapping, and she joins in on the last lines of the pledge of allegiance and the “amen.” To the sound effects, Saer says, “It’s not that hard. You’re not chewing rocks.”

(Had never noticed before: Ellen doesn’t eat the turkey. She flips it off her fork onto the floor and puts an empty fork in her mouth.)

(Despite my notions about Clark’s idea of Christmases past, he actually tells his father that all their holidays have been screwed up. Hadn’t noticed that before.)

Aunt Bethany’s national anthem gets a laugh and singalong.

I suggested, in response to Clark’s “I did it,” that the Christmas in this film (nevermind that the film never actually gets to Christmas Day) didn’t go well and Saer reiterated the capitalist thing: “All he cared about was his Christmas bonus and he got it, so it’s fine.”

In the end, Saer was “kind of disappointed.” She added, “The first one was a lot better.”