i don't want to spend the holidays dead

The thing is: he didn’t.

Let me back up.

The final line in Christmas Vacation is Clark saying, “I did it.” But, really, he didn’t do much of anything. He went to get the tree, forgot a saw, got the tree home, put part of it inside and broke a couple windows. He wanted to prove Santa was real to his niece but even if she thought that plastic Santa flying through the air was the real thing, he didn’t do that. He put up those 25,000 bulbs but without his wife flipping that switch there never would have been any light to them. He only got his Christmas bonus because Eddie kidnapped his boss.

Clark accomplishes pretty much nothing in this movie. Even his freak out results not in him getting violent (like in the original) but Eddie.

Hell, he breaks a hole through the “floor” of the attic yet doesn’t climb down through it to get out. Instead, he sits in the attic and reminisces about old times that don’t really exist.

That last bit is kinda the point, though. Christmas here, is just an idea. And idea that this film fails to capture. It tries. In between crass humor and mean-spirited insults, it tries. In a comment on yesterday‘s entry, long-time reader Maolsheachlann called the film not just mean-spirited but depressing. I’m not so sure about the depressing part, though. Maybe it’s disappointing that a film can consist almost entirely of cheap visual gags and insults and despicable behavior by an adult. Maybe... maybe that can also be depressing, but that’s the experience of the film, not the film itself...

Then again, maybe the point—not to the film, but to our embracing it over the years—is twofold: the first point being that despicable behavior by an adult, particularly an adult white male. In America, that’s the cream of the crop, and Clark Griswold is just like so many of us, barely getting by, spending money before he’s got it, but doing just well enough to appear affluent. Hell, relative to most of the world, he is affluent. He’s the kind of guy who can, without irony, carry a brochure for the pool for which he’s already made a $7500 deposit folded in his suit pocket. He’s the kind of guy who can’t control his tongue but doesn’t have to because he’s on top even if he’s close to the bottom of that top, if you get my meaning. There is no real way he’s going to lose in the end not because he’s the protagonist but because he’s a white man living in the suburbs. In this film, as I’ve already mentioned above, he’s not even the one committing the capital crime and getting away with it because... family.

(An aside, but not really: Clark, right before the parents arrive, is in the bathroom, there’s a Santa hat on the sink and he’s got a Santa beard he holds up to his face. Yet, he will never dress as Santa in this film. Maybe it’s because there was some planned (or even filmed) sequence in which he does and that got cut, but maybe it’s to make sure we realize, if we didn’t already, that Clark might as well be Santa Claus. He’s nearly as imaginary. He’s a middle class American with a house big enough for an extra 10-12 guests and a pool coming for the backyard (yet he’s just a sibling [error: Eddie is not Clark’s sibling; relative would have fit better here] away from destitution).)

The second point, then, may be that we want this guy to have some comeuppance. He’s got the nice house and the two kids and the pool (coming). We want his Christmas to go badly, at least as badly as the worst of our own family gatherings. Plus some. The point to “Christmas ‘59” (the story on which Christmas Vacation is based) has got to be to combine all the worst aspects of years and years of family gatherings and shove them into a couple weeks of story, an hour and a half of screentime.

At least it’s not as bad as European Vacation (which I also watched today) with its constant insulting of Americans, Europeans and everything in between. I mean, I like this movie. European Vacation is bad jokes and little else. This movie, like the original Vacation, has a good message at its heart, even if it conveys it badly. Like Planes, Trains & Automobiles, like Dutch, like Pieces of April, like Home for the Holidays, like Home Alone, this movie revolves around the notion that it is a good thing to spend time with family, even family we don’t particularly like. It’s blood being thicker than water. It’s family mattering... maybe not above all else, but certainly having its place at least on the special occasions. 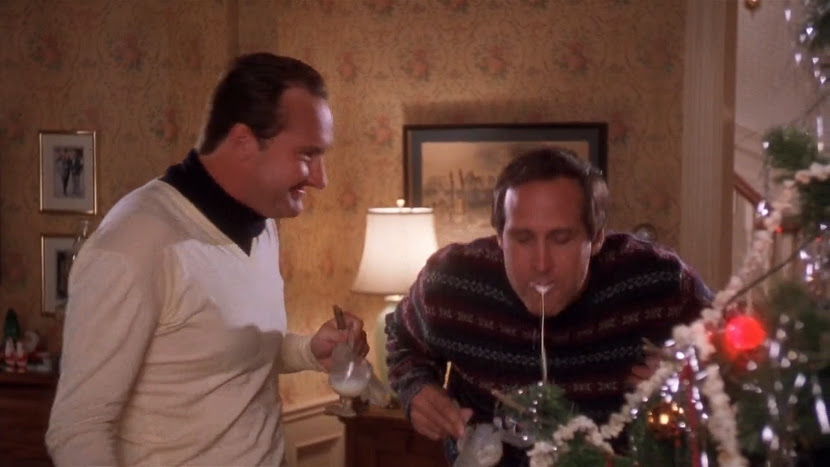 On the other hand, maybe we could also take the point of this film to be the opposite, that the nostalgia is pointless because family is just a bunch of people we don’t necessarily like and probably don’t need to spend time with. America is all about the individual over the collective; a film like Christmas Vacation hits both sides here; it tells us family matters and what is important in life is being together, but then it spends the entirety of its content separating the lead from his family, making everyone but Clark a supporting player, just like life in America. Each one of us is supposed to be the star of our own life. Everyone else is superfluous.

Maybe Maolsheachlann is right. Maybe this movie is depressing.