The character of Ralphie Parker has been in no less than six movies. Several were on PBS so they aren’t readily available. I found a couple online, may watch them in the next few days. There was also a sequel to A Christmas Story... which has a 3.4 on IMDb.

The character was also apparently in American Playhouse’s Concealed Enemies: Part I: Suspicion, a “dramatized account of the actual events that led to the 1950 conviction of former U.S. State Department Alger Hiss of perjury before a federal grand jury...” There’s more to the description but I cannot imagine how the fictional Ralphie Parker figures into it. Movies in Real Life also, apparently produced a scene from A Christmas Story in real life.

Ralph Parker originally came from Jean Shepherd’s book, In God We Trust, All Others Pay Cash. While Shepherd (who also narrates the film) always maintained that the book was a novel, structurally it is a collection of short stories. A Christmas Story is mostly based on four of the stories: “Duel in the Snow,” “The Counterfeit Secret Circle Member Gets the Message,” “My Old Man and the Lascivious Special Award That Heralded the Birth of Pop Art” and “Grover Dill and the Tasmanian Devil.” Additionally, “The Grandstand Passion Play of Delbert and the Bumpus Hounds” from Shepherd’s second novel, Wanda Hickey’s Night of Golden Memories, was used. The five stories were collected in an A Christmas Story book in 2003.

More interesting, though, than the film coming from multiple short stories is where those short stories originated. Jean Shepherd performed such stories on the radio. He adapted some for Playboy magazine, but if not for poet and children’s book author Shel Silverstein, In God We Trust, All Others Pay Cash and by extension A Christmas Story probably wouldn’t exist. Shepherd wouldn’t write down his stories because he “wasn’t a writer”—he didn’t even use scripts for his radio shows—so Silverstein recorded Shepherd’s stories and transcribed them then got Shepherd to help edit them. I’ve obviously never heard Shepherd on the radio—though he was on the radio as recently as the 1990s—but I imagine his stories (judging by his voiceover style in the movie) to be a lot like Garrison Keillor’s The News from Lake Wobegon. Lake Wobegon is to Keillor’s hometown Anoka as Hohman is to Shepherd’s hometown Hammond.

The nostalgic tone, the memoir-ish content—while this isn’t accidental, Shepherd has maintained that his “novel” was entirely fiction. Still, there is plenty of truth in such stories. I’m reminded of folklorist Jan Harold Brunvand (who I recently cited while watching Black Christmas) and his oft quoted (also the title of one of his books) “The Truth Never Stands in the Way of a Good Story.” Brunvand refers to capital-T Truth (i.e. facts) but I would argue that little-t truth is what good stories are all about.

This is where Christmas Vacation and A Christmas Story both work. The little interactions between characters in both films hold some truth to them. The characters and interactions in the latter may be far more pleasant on average, but that doesn’t make them more truthful, just more enjoyable. 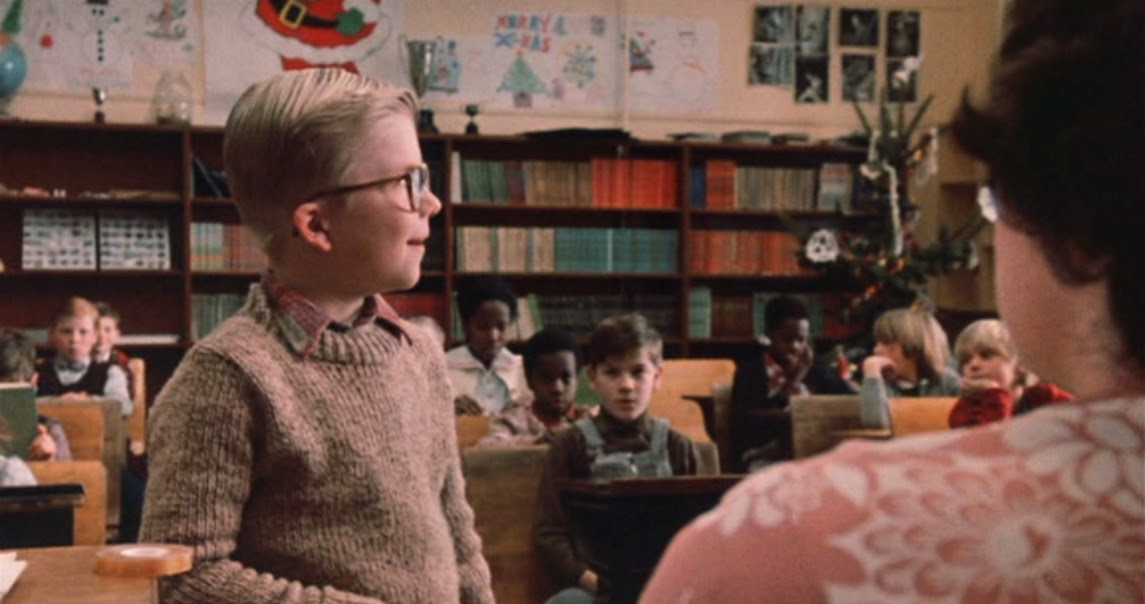 Me—I can relate to Ralphie’s daydreaming, though I never did the Hollywood conceit thing of staring off for way too long while people around me tried to get my attention. A couple seconds maybe, but not nearly as long as, say, Ralphie standing at his teacher’s desk. As a parent, I hope I’ve been as excited and supportive as Ralphie’s mom when she’s got Randy eating like a pig or the Old Man when he’s talking to Ralphie about his just-opened BB gun.

As a writer, I’ve put elements from my own childhood into stories before... I was going to reference a few specific scenes in a few specific stories (the football field beating in The Man with the Holes in His Hands, for example) but that would be a) coy and b) a little rude, because most of my stories and all of my novels are unavailable. For a while, some novels were available, self-published, but I pulled them down a while back to do another editing run and haven’t gotten back to them.

The thing is, as a storyteller, as a writer, it’s easy to take details from reality and infuse fiction with them. That doesn’t make the stories factual but it may make them true.