Silent Night, Deadly Night is awesome and it amuses me that the main character is named Billy considering how the killer in Black Christmas calls himself Billy*. Silent Night, Deadly Night falls right in the middle of a big wave of slasher films and is full of blood and breasts and stuff actually happens... unlike Black Christmas. While Nowell’s (2010) argument that Black Christmas was a pioneer film for what would become the slasher genre it almost is not a horror film at all. Instead it’s something more of a drama, with hints of melodrama and interruptions of horror. It’s strange amalgamated structure is on purpose, of course. As Nowell describes it, “It was Canadian and it was the product of a complex network of transnational indutrial shifts that had been unfolding in the late 1960s and early 1970s involving the Canadian government, the Hollywood majors, America’s theater-going youths, and independent filmmakers from around the world” (p. 61). Nowell argues that Black Christmas was capitalizing on the success of and audience for four films in particular: American Graffiti, The Exorcist, Magnum Force and The Way We Were. I would add some Romeo and Juliet—and Nowell would probably agree with me since he says Olivia Hussey’s

transformation... from flag-bearer of star-crossed adolescent femininity... into driven careerist who rejects the roles of wife and mother five years later represented another attempt on the part of the producers of Black Christmas to make their film marketable to a generation of politically-informed female patrons that were perceived to subscribe to the central tenets of second-wave feminism as they entered adulthood in the early 1970s. (p. 73)

—and, though Nowell barely makes mention of them, Peeping Tom and Psycho. Nowell does mention those last two, of course (and I’ll get to that in a moment), but only in passing, and seemingly rejects Clover’s (1992) focus on them as the roots of the slasher film.

Anyway, American Graffiti, obviously, had the teenage and college-age audience that Black Christmas targets. It’s a strange thing to think about sometimes but earlier films we would classify as horror did not market to the younger audience like they do today. Nowadays, every horror film markets young. In fact—and I don’t recall where I read this; it might have been in Clover—there tends to be less sex and nudity in recent horror films because a) the MPAA can rate it PG-13 instead of R and teenagers can flood the theaters plus b) sex and nudity is free on the internet. When Black Christmas was made, the X-rating was losing favor outside of pornographic films and

To secure an R-rating, none of the six deaths that took place in Black Christmas were preceded by a chase, only one followed a brief struggle, only half showed momentary victim horror, and the blows that killed victims were positioned off-screen... Gore featured in only two of the murders, with fleeting shots of a bloodied weapon and post-mortem corporeal damage appearing on one occasion respectively... (p. 74)

Black Christmas putting young adults center stage was a new thing for horror. The focus on females was also somewhat new. Filmmakers were targeting men more than women at this time (Nowell, p. 70). But, Black Christmas aimed at women much as The Way We Were and Love Story did by putting a romantic storyline near its center...

Nowell makes this argument. I find it both compelling and a bit confusing because the couple at the center of Black Christmas are not getting on. Jess is pregnant and wants an abortion—prompting Nowell to call the film “politically-engaged”—and Peter is at glad at the first detail and enraged by the second. Contrary to popular culture’s version of young men, it is Peter who wants to drop everything and get married while Jess insists she will not change her mind about the abortion. She is at once right in line with Clover’s notion of the Final Girl and somewhat antithetical to it. 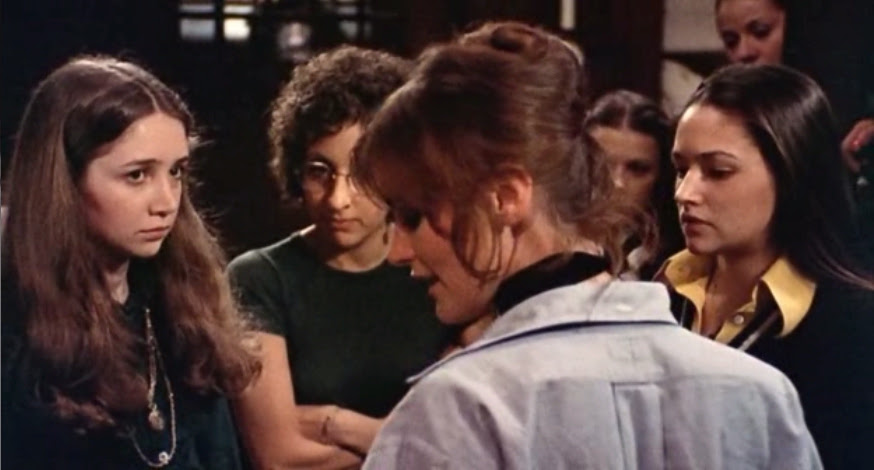 Jess is a Cloverian Final Girl because she is watchful, intelligent and resourceful. She is not because she is sexually active and particularly feminine... Aye, there’s the rub. I would point out that Clover specifies that the Final Girl is “not fully feminine—not, in any case, feminine in the ways of her friends” (p. 40). We don’t see a lot of Jess’ friends. We see the virginal Clare, the alcoholic Barb and Phyl, who really has a Final Girl-style name (and reminds me, at least, of The Way We Were‘s Barbra Streisand). Really, what Jess is not is feminine in the way American—and, even though this movie is Canadian, it plays on American ideas, notably in the timing of the inclusion of abortion not long after Rowe v Wade—women were supposed to be. As I’ve argued that the slasher subgenre was born partly in response to the feminist movement, Jess serves here as the feminist at Pi Gamma Sigma... along with Barb but Barb’s “feminism” exhibits itself in rather... socially unacceptable ways: drinking in public, even at the police station; giving alcohol to children; making sexual jokes while filing a police report; and telling inappropriately sexual anecdotes to her friend’s father.

(Barb also as the unnecessary (and improperly introduced) asthma and the glass unicorn which really should have been introduced earlier as well, Chekhov’s unicorn if you will.)

Jess is, perhaps, socially un-feminine. A little too headstrong. Plus, she does reject, as Nowell mentions, the roles of wife and mother; she is career-oriented (though, interestingly, we never learn what that career might be, only that she has dreams and wishes to fulfill them...

I just got sidetracked looking through my urban legend/folklore books. Looks like I’ve got a topic for... well, not tomorrow.

I didn’t get around to how Black Christmas was capitalizing on Magnum Force and how briefly Nowell links the film to Peeping Tom and Psycho... more on that tomorrow.

And, I am both glad (because, as you should be able to tell, I like horror films) and upset (because this month was supposed to be about Christmas) that Black Christmas has not led to much talk of Christmas. Maybe, in the next two days, in between Peter/Billy as Cloverian killer and the Babysitter and the Man Upstairs urban legend I will figure out (or invent) the reason this movie is a Christmas film.

* I still contend that Black Christmas would be a more cohesive and fulfilling film if the killer was only referring to an imaginary “Billy” on the phone and when he is in Barb’s room, and that he was actually Peter. A little editing and that film would be doable...