has anyone seen flick? 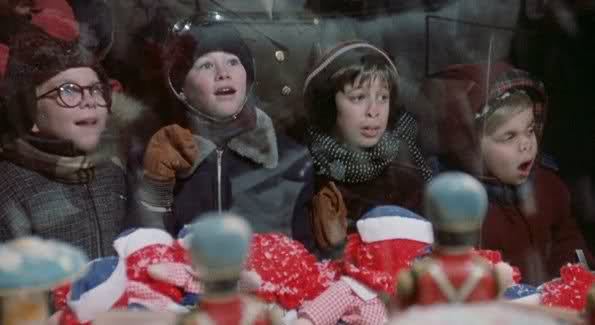 No Bob Clark directing, no Jean Shepherd narrating, A Christmas Story 2 is not immediately horrible. Instead of the Red Ryder BB gun, there are cars and girls now because Ralphie is a teenager. His fantasies herein go from being just about one (the girl) to being about both in a matter of minutes.

And we get bon mots like this from the Old Man: “Treat the gas like your wife and the clutch like your mother-in-law.” (Adding a punching motion to that last bit.)

A little too much farce to this one, Ralphie and Schwartz and Flick like the Three Stooges. And, if this was actually based one stories from In God We Trust, All Others Pay Cash, as it claims, the stories seem even more separate than in the original. And, the Old Man being cheap doesn’t seem to fit the character from the original.

There is a nice twist in Mother’s stash of money being revealed just after she learns of Ralphie’s money problem, but then she does not end up helping him; instead she buys fish to save face for the Old Man and his failed stint ice fishing. Ralphie’s helping out the poor family almost plays like a John Hughes story turn, but in the end, the film works much better than its low IMDb score suggests.

With Bob Clark and Jean Shepherd involved, My Summer Story (aka It Runs in the Family), starts well. Instead of aping moments from the original, it mentions Christmas then deliberately moves on, just as life should.

(Film connections: that last movie, A Christmas Story 2 has Daniel Stern from Home Alone as the Old Man, and this movie includes two different Culkins (though, neither one Macauley), plus Kieran Culkin was also in Home Alone, as Fuller. Ralphie’s new enemy (Scut Farkus having been demoted) Lug Ditka is played by Whit Hertford who played Jacob in A Nightmare on Elm Street 5: The Dream Child. Less notable (because of the minimal screentime) you also see Betty Boop briefly in My Summer Story. Mae Questal, Aunt Bethany in Christmas Vacation was the voice of Betty Boop.)

Though My Summer Story should be set in 1940 (A Christmas Story being Christmas 1939), the film stock used plays a little too new. Someone on the IMDb board suggested this film seems more like The Sandlot’s ’60s than A Christmas Story’s ’40s. And, that makes sense. Weird thing, Charles Grodin, actually older here than Darren McGavin was in the original as the Old Man, seems younger. He also seems a little more... angry than the crazed zaniness of the Old Man in the original.

The personal property tax bit is actually pretty funny. Such a tax still exists in Indiana. Speaking of Indiana, though, I thought I had another—

(The connection, by the way, would have been that Phil Connors grew up in Cleveland so he might have shopped at that same Higbee’s as Ralphie Parker, though a decade later.)

I won’t nitpick the timing of the Exposition in Chicago (which was in 1933) because, well, a fictional story can move stuff like that.

(By the way, Phil Connors, for those of you inattentive folks, is the main character in Groundhog Day.)

But, hypocrite that I am, I would like to nitpick the use of the Spaghetti Western music from the 1960s over the big spinning top battle because, well, you can’t have your messed up time work in both directions; that is just selfish.

Another nitpick: how does the cop from the exposition show up at the Parker’s house? It’s not even the same state.

In the end, the movie works better than A Christmas Story 2 but the ending relies a bit too much on sheer luck with Ralphie catching the fish.

Ollie Hopnoodle’s Haven of Bliss gives us the Parker family again. Jean Shepherd is involved again (for the record, this is 6 years before My Summer Story and 24 years before A Christmas Story 2, five years after the original) but not Bob Clark. Almost immediately, there’s something off. Interactions play more like a sitcom—for example, Ralph’s “For crying out loud” plays like a catchphrase that hasn’t been earned. Shepherd’s narration plays well enough, but Ralph’s search for his first job (Apparently the makers of A Christmas Story 2 never watched this or they would know Ralph had a job at 14 so 15-year-old Ralph should not be calling his Higbee’s gig his first job.) plays like a sitcom plot. Similarly, the yearly trip to the lake doesn’t quite fit with the access to the much closer lake seen in both My Summer Story and A Christmas Story 2. I guess that’s the problem when separate filmmakers both combine multiple short stories and make up other details to create separate movies coming from (at least in part) the same source material. Continuity be damned.

Speaking of continuity, I’ve already mentioned that A Christmas Story takes place around Christmas 1939, but the movie never tells us specifically when it is set. Red Ryder BB guns were introduced in 1938 so it’s after that. The Wizard of Oz was out in 1939 but Fantasia (which could be the style Mickey Mouse they’ve got in that parade) didn’t come out until the end of 1940. And, Bing Crosby’s Merry Christmas, which we hear on Christmas morning, didn’t come out until 1945. Plus, Indiana schools were not racially integrated until 1949, Scut’s braces shouldn’t have existed until the ’70s, Ralphie’s glasses until the ’80s. And, many more, despite a hell of a lot of period-appropriate props and set dressing.

Ollie Hopnoodle’s Haven of Bliss, if not for mention of the lake trip early on should really be a couple shorter... episodes of the Parker family’s sitcom. The lost dog bit, Ralph’s first job, and the actual roadtrip are all quite separate story entities. Then again, Jean Shepherd insists that his In God We Trust, All Others Pay Cash, which everyone else considers a collection of short stories, to be a novel. As I suggested recently, this actually makes the movie a little more realistic but a lot less cinematic.