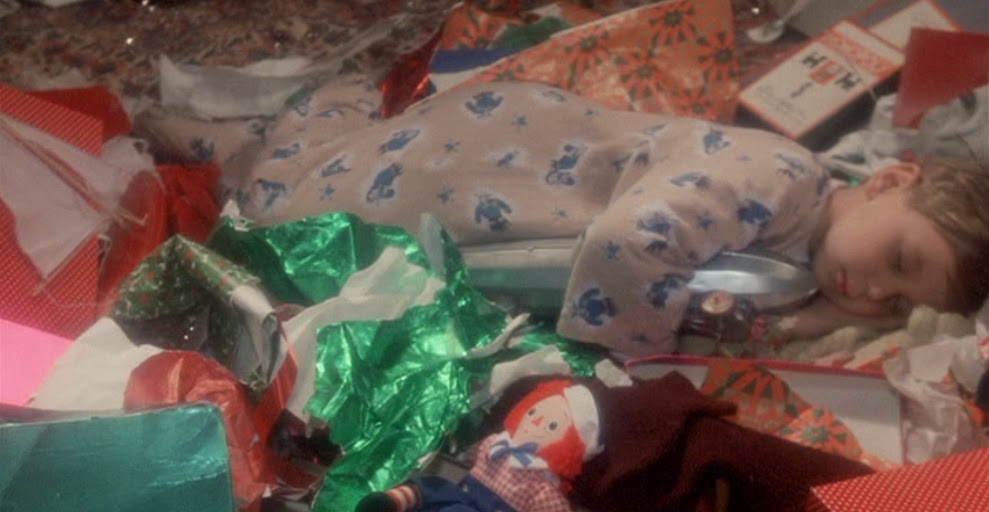 From A Christmas Story From our apartment this morning.

One of those truthful scenes in A Christmas Story that I was talking about yesterday is the Christmas morning unwrapping and the chaotic mess that remains afterward. I don’t much like such messes, even though as a kid, once I had my own bedroom, it was often a mess—the room was small enough that I didn’t need the floor anyway, so I would leave books and things all over the floor. Because I don’t like such messes I have made a habit since my first Christmas (2007, I believe) to take the discarded wrapping paper as it falls and ball it up, tuck it all away in a discarded box. Like the Anal Retentive Chef from Saturday Night Live, I clean up as it goes. But, really, you can’t keep up with all of it. Excitement delays attentiveness. Like Daryl Zero leaving that receipt behind in one of my favorite movies (which I do intend to watch for this blog at some point), Zero Effect.

Emotion gets in the way of, well, the attachment to a cleaner space in this instance.

Watching a movie, though, sits you right on the brink of detachment and attachment. You’re separated just enough that you can enjoy even the most tense moments, but—if the filmmakers have done their jobs right—you are pulled in enough that you care about those moments, that you are invested in the characters. You worry, perhaps, about Kevin McCallister even though you know objectively that the makers of Home Alone are not going to let the Wet Bandits win. That’s not always the case; some films and some filmmakers (the less family-friendly ones) put characters in real danger.

A Christmas Story is not about characters in danger, though Ralphie does risk punishment (and, to be fair, his little brother does think the Old Man is going to kill him). For a kid—beware trite generalities ahead—and we were all kids (or are kids)—stuff like the triple dog dare or Scut Farkus are real dangers. “In our world, you were either bully, a toady, or one of the nameless rabble of victims,” Ralphie says. These social roles are real dangers for kids, identity markers that dictate social interaction, dictate the future. Regardless of any real violence from Farkus or Grover Dill, of course.

Already “watched” the movie today. It was on as we were opening gifts.

I want to get to some of the extras as well, especially the commentary track.

And, to be done with Christmas just a handful of days after Christmas.