does barry manilow know that you raid his wardrobe?

Shrek: For your information, there's a lot more to ogres than people think.

Donkey: Oh, they make you cry?

Donkey: Oh, you leave them out in the sun, they get all brown, start sprouting little white hairs...

Donkey: Oh, you both have layers. Oh. You know, not everybody like onions. Cake! Everybody loves cake! Cakes have layers!

Shrek: I don't care what everyone likes! Ogres are not like cakes.

Donkey: You know what else everybody likes? Parfaits! Have you ever met a person, you say, "Let's get some parfait," they say, "Hell no, I don't like no parfait."? Parfaits are delicious!

Shrek: No! You dense, irritating, miniature beast of burden! Ogres are like onions! End of story! Bye-bye! See ya later.

Donkey: Parfait's gotta be the most delicious thing on the whole damn planet!

I start with that for the obvious pun--as a continuation of yesterday's entry, I'm going to talk about the characters in The Breakfast Club removing layers of clothing as the film goes on--and to get back to Altman and Taylor's social penetration theory (which I covered in regard to When Harry Met Sally a while back).

First, the literal. Every character (except for Carl, but he's got so little screentime, it almost doesn't count) takes off clothes during this film. They all remove their outer layers, of course. It's March in Illinois so it's cold outside (and principal photography started 4 days after the Saturday on which the film is set). Early on, there's even an odd, but potentially connective, little moment between John and Brian when they both move to take off their coats at the same time. Brian balks and John continues. Because of this, Brian retains his only jacket while Claire still has her leather jacket on and Andy both of his jackets, Allison her coat, and John still has his denim jacket... I don't need to catalog every bit of clothing, but by the time they have smoked together and the big conversation scene happens, Claire's down a coat and scarf, Andy two jackets and a sweatshirt, Brian his jacket, and Allison her coat. John has even left his denim jacket behind after crawling out of the storage closet. In time to share information...

Well, let's be honest. They have already all revealed personal information by this point, but most of those revelations have happened in passing, without deliberation, and a few of those revelations have not really come by choice. For example, just as John has his nice quiet "fuck" after his big "fuck you" after getting two months more worth of detention--he is so used to being an asshole that he can't help it--he knocks all those books down and climbs up onto the staircase to be by himself after revealing that his father abuses him; his revelation is not intentional, exactly. His tendency to needle people until they reveal things just happened to get turned on him by Andy; he couldn't resist. And, his needling has also gotten others to admit details of their lives. The revelations don't become... peaceful or even voluntary until they smoke. Except for maybe Andy's admission to Allison in the hallway but even that is forced by her.

My point is, in time to reveal information willingly, they have all removed physical layers. Now they can reveal psychological layers. In fact, it is roughly halfway through the film that John strips off a couple layers, dances around the second floor of the library and shatters the glass on the "foreign language" booth--surely, there's no meaning to the room he's coming out of there. None at all.

In terms of Altman and Taylor, orientation has already happened. No matter how much John has tried to drag personal details out of people, the discussion has remained mostly impersonal. "Peripheral items are exchanged more frequently and sooner than private information" (Griffin, 2006, p. 121).

Gradually, this changes to explanatory affective exchange, in which "self-disclosure is reciprocal" (ibid). This begins with the smoking. Inhibitions weakened, these characters are willing to actually look at one another as people worthy of attention. They're literally seeing the world differently.

The big conversation--that's Altman and Taylor's affective exchange stage. This stage of the relationship "focuses on evaluative and critical feelings at a deeper level" (Littlejohn & Foss, 2011, p. 237). Griffin's (2006) description is key to the pace of the big conversation; "penetration," they write, "is rapid at the start but slows down quickly as the tightly wrapped layers are reached" (p. 121). The climax of the conversation may be Brian's revelation that he was contemplating suicide, but the heart of the scene is Andy's monologue, the point where the conversation slows down, the camera pans around the group slowly, and we are there with Andy in that moment. We get to see him anew just as Brian and Claire and Allison and John do.

There's a nice moment, very brief, when Brian is explaining about his failed lamp. He asks John, "Have you seen some of the dopes that take shop?" Even as John responds, "I take shop," Claire has flinched. She knows his response before he offers it. This, still in that same conversation, is something like the stable exchange stage. Littlejohn and Foss (2011) explain, this stage is "highly intimate and allows the partners [or quintet] to predict each other's actions and responses" (p. 237).

We are seeing complete relationships over the course of a single day. The ending may very well be the breakup. Claire may be right; come Monday, they will not be friends. But the point is that they opened up and had those relationships. They did not just exist in the vicinity of each other for another day. They allowed their circles to overlap. Maybe it's temporary, but they will likely be a little more willing to open up the next time. They will be better off. 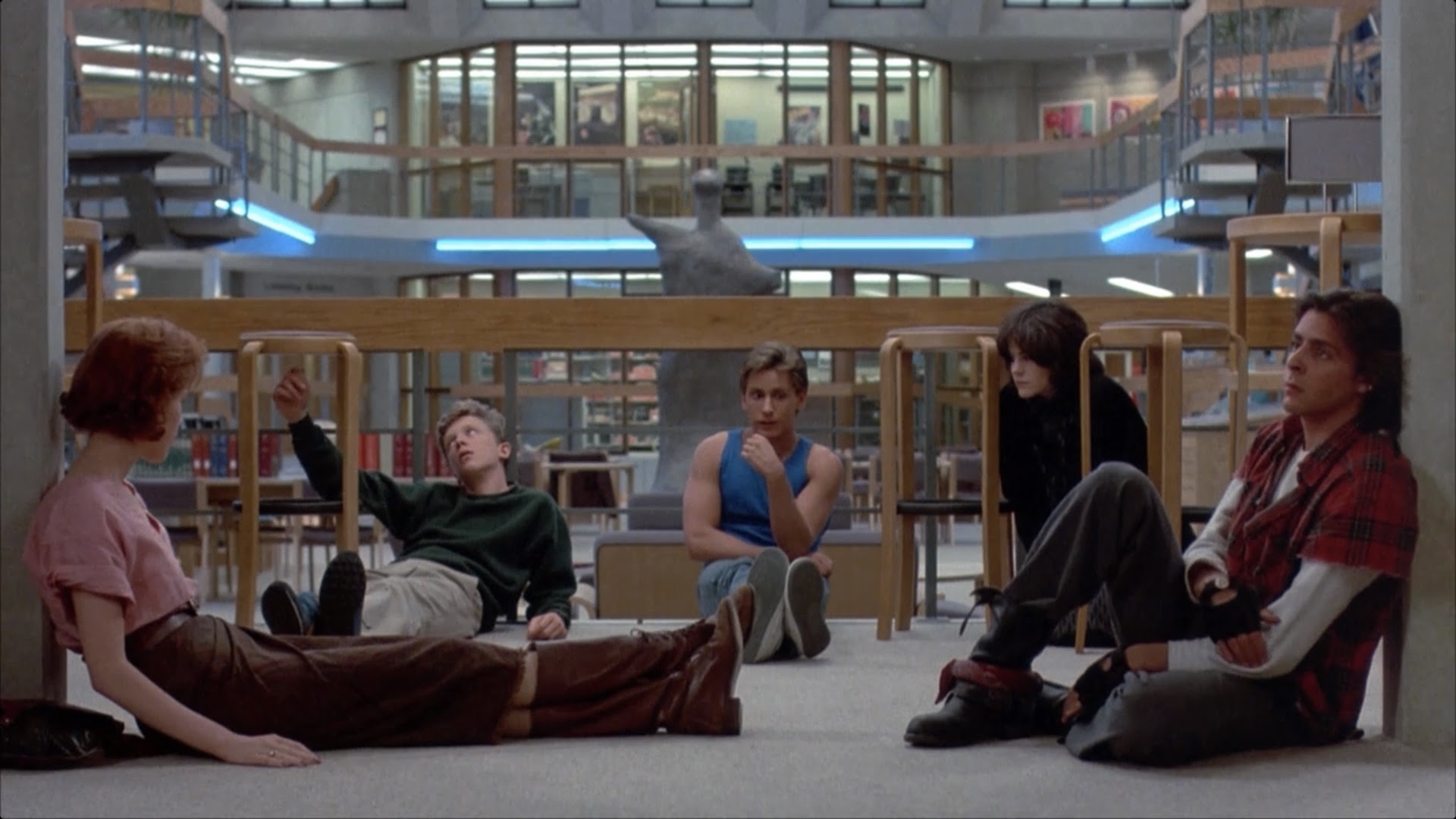 I've neglected to mention Vernon's clothing removal. (By the way, even drinking with Vernon, Carl never removes his gloves, but he has unbuttoned his janitor's uniform, revealing a t-shirt beneath.) Unlike everyone else's, Vernon's removal is antagonistic--he removes his suit coat to challenge John into hitting him--but it is still quite revealing. Richard Vernon has proven from the start to be a guy who has apparently lost the ability to care about any of these kids. But, here we see just how far he would take it, just how much he sees his relationship with the students as an antagonistic one. At least Principal Rooney focuses all his ire on just one student.

[Correction: Brian <i>does</i> remove his sweatshirt, after he writes the essay.]