has anybody seen mike hunt?

It's all about sex.

And, why shouldn't it be. I mean, most of the characters in Porky's are teenagers. And, the film comes before, say, AIDS was a huge thing, and long before pornography was free on the internet. Of course, all of these teenage boys are out for sex. They're fucking teenagers, and, well, they want to be fucking teenagers.

Open on a neon sign. Two pigs, male and female. GET IT. The lights change and the female turns her back to the male but her dress goes up to reveal her butt. The male pig has lost his hat. AT. And, Porky's is lit the whole time. And, right away, when nothing has even happened yet, we know this is a movie about sex. 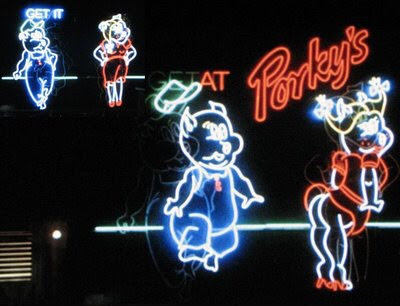 And, wow, I forgot that this movie was not set in the present but the 1950s.

Our first real scene is Edward "Pee Wee" waking up with an erection. He proceeds to measure his penis and he's got a growth chart. This film really is not afraid of dealing with rather explicit material that older films would have been unable to show us.

There's some interesting race material going on here, as well. The discussion about getting the negro for later and now one guy's upset about there being a jew involved in... the movie still hasn't established the details for what's going to happen later.

I like how this movie introduces so many characters and nearly half an hour in right now, it's still introducing them. Obviously Pee Wee is going to be important, but it's hard to gauge who else is going to matter.

In his review of the film, Roger Ebert says, "Teenagers seem to occupy a time warp of eternally unchanging preoccupations." He calls movies like Porky's "A.C.N.E.S." which stands for "Adolescent Character's Neurotic Eroticism Syndrome." The male characters here, from Meat to Pee Wee, "are neurotic about the usual three subjects: the size, experience, and health of their reproductive organs" (ibid).

Another interesting detail that I have to mention on Day One with Porky's is that it was directed by the same Bob Clark that directed A Christmas Story (which I watched back in December). Aside from a bit of nostalgia for "simpler" times, it's hard to see any obvious similarities between the two films. The weird thing is, I suppose, that I saw the former as a kid and never saw the later until I was an adult. I can't remember if I saw the original Porky's in the theater. I don't think I did. I know I had seen it, and the second one, on TV before the third film was out; that one I did see in the theater.

I do remember this time, even though I was only 6. I remember when Quest for Fire (in its sixth week when Porky's came out) and Chariots of Fire (in its 23rd week) were in theaters at the same time. I saw the latter in the theater, found it pretty boring--I was six. I'm not sure I ever saw Quest for Fire all the way through.

Thing is, as I watch this, I remember the fist fight between Brian and Tim. I remember one of my sisters thinking Brian was cute. That could have been while watching it on TV, I guess.

Arthur was in its 19th week in theaters, and I did see that one in the theater, I'm fairly sure. Then again, Arthur was on one of our first videotapes and made regular viewing rotation in our house so maybe I'm just so familiar with the film that it feels like I saw it in the theater. Raiders of the Lost Ark was in its 23rd week, and I know I saw that in the theater. I remember my mother attempting to cover my eyes when Indiana ducks and that big Nazi turns to get caught in the propeller. She failed to get her hands in front of my eyes, but there was no real gore anyway, just a splatter of blood.

A couple months after Porky's came out, The Road Warrior was out. (As was Annie, which I also saw in the theater, but that's less important right now.) So, for me Porky's falls into the gap between two of the greatest films of my childhood. Five-year-old me loved Raiders of the Lost Ark and six-year-old me loved The Road Warrior. To this day, I consider the former to be the definitive adventure film and the latter to be the definitive action film. And this--Porky's--is all about a different kind of action and adventure. And, it's such a simple little film. It's got its tangents, of course, but the basic plot is simple. A group of teens get kicked out of a bar and eventually take revenge by destroying the place.

Simple but there's room for a lot of discussion... the usual topics: gender, race. But, also something else about sex itself maybe, or sex in movies anyway. Coming out of the 1970s, into the 1980s...

This will be different, but it should be interesting.