I would say Ferris Bueller's Day Off is classist, but a) I'm kind of in the mood to be more rambly and thoughtful and b) it's hard to argue a class conflict between Ferris, Cameron, Sloane, and Jeanie and the richer folks in the city... well, no, it's harder than it should be, but it's not hard.

The problem is that the Bueller family is obviously well off. Katie Bueller works in real estate, Tom works in advertising--and, seriously, he needs to be the guy the same actor plays in the beginning of Planes, Trains & Automobiles (and the garage attendant's friend should be Gummy from Fletch, having had enough of Los Angeles the year before). No good reason for it, but there's no reason he can't be, and movies connecting to one another is awesome, especially when it's just for shits and giggles (like most of Quentin Tarantino's movies linking up tangentially). Also, the Bueller family was supposed to have two more kids, 7-year-old Todd and 12-year-old Kimberly, and supposedly some scenes were filmed with them, but then they were cut.

(My own family--seven kids, but in 1986, four were not living at home, I think. Two were married, one had her own apartment, another was... itinerant. I bring us up for comparison. My father, an electrical contractor, was certainly doing well enough in the 80s, my mom was working... an office job at that point. A couple years earlier she'd worked in a school office. We were not rich. But, we had money. We certainly had spare cash for a lot of movies.

We didn't have a pool, though we knew a few people with pools. We didn't have a collection of sports cars, but we did have multiple vehicles. In '86, we had at least three vehicles at home.

Maybe I'm disproving my point about the Buellers. It's fairly easy at a certain working class level to present as middle class, even upper middle class. We had new clothes often. I always had the latest toys. As gifts one year... it may have even been 1986, the three of us still at home all got walkmans, and we had a home computer already by then, too, so we were technologically savvy. We had money for vacations, We did okay.)

The Fry family is also well off, more so (presumably) than the Bueller's. Cameron's father has a collection of sports cars in a fancy garage. [And, as I will figure out in the next couple paragraphs, they have a pool.] Plus Cameron can afford to have both a belt and suspenders to hold up his pants. If that's not the extravagance of someone rich, I don't know what is.

The Peterson family is (probably) well off as well. I think the pool where they spend time in the third act might be at Sloane's house, but then, why is she wearing that weird undergarment instead of a swimsuit. It could be Cameron's house, but the style of the house and the patio area does not seem congruent with the style of the garage. Here, look:

The front of Cameron's house: 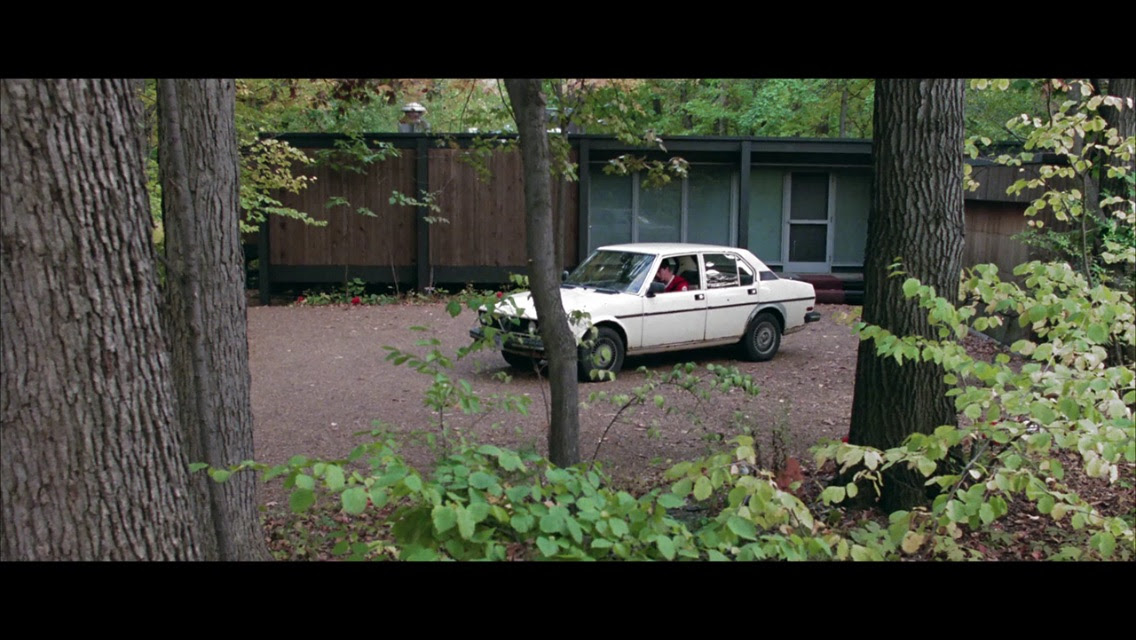 The garage, for comparison: 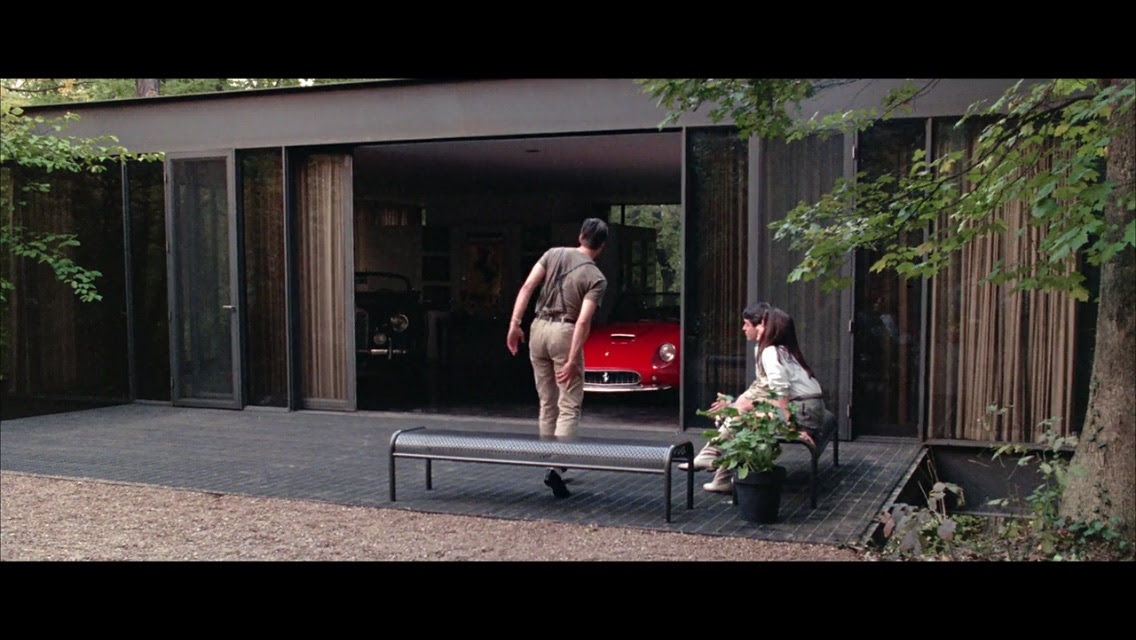 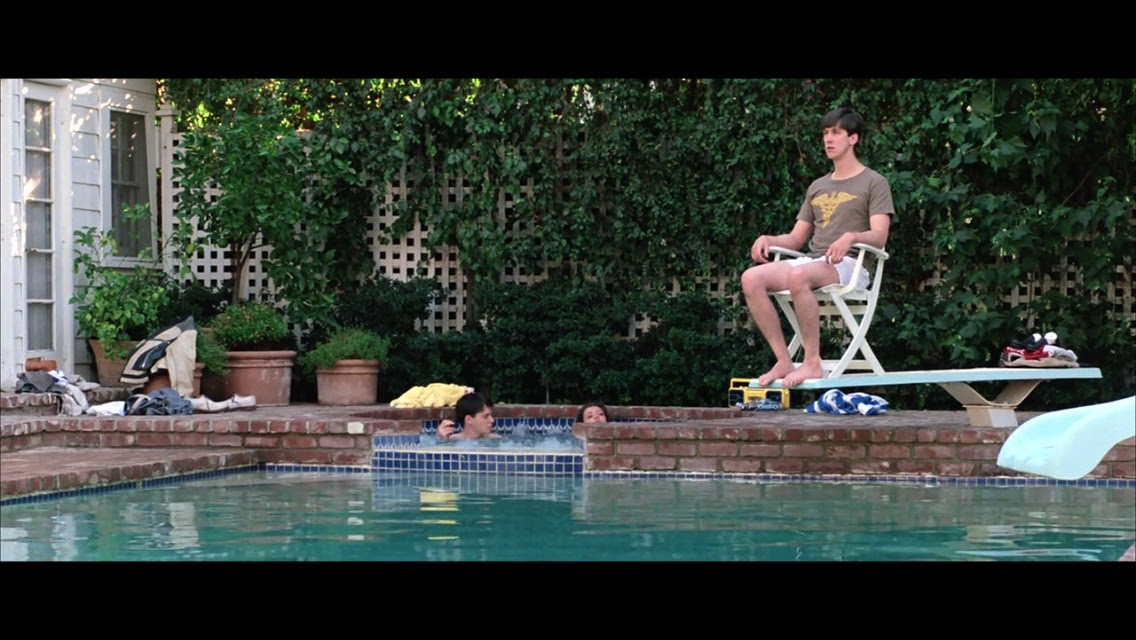 If Ferris' sister and Mr. Rooney were not at the Bueller house around the same time, I would think the pool area matches the Bueller house pretty well, but by process of elimination, it's got to be Sloane's house. Which tells us something about Sloane, I suppose.

Another side of the house with the pool, by the way... 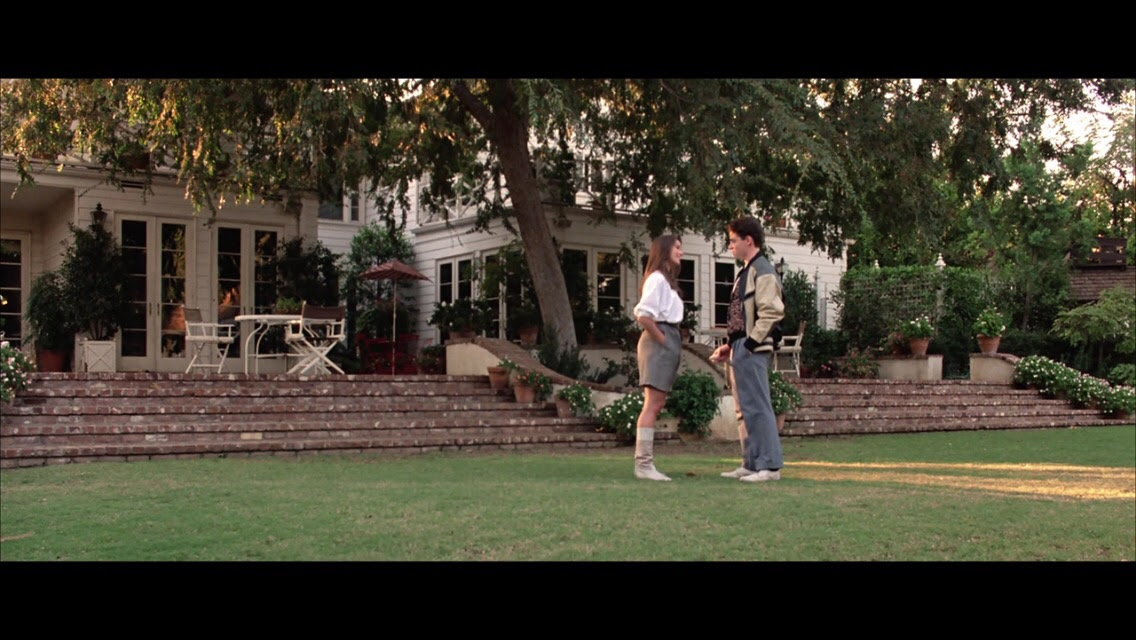 ...which actually makes less sense now that I'm running through the movie on my phone to get the screencaps because 1) they're at the pool 2) they're at the garage 3) they're by those brick stairs 4) Ferris runs home... somehow, this has to be Cameron's house. Which ruins my next point.

My next point was going to be: Aside from not being embarrassed that Cameron saw her changing, but I'm guessing she specifically changed into that outfit to arouse Ferris, and the two of them--Ferris and Sloane--are enjoying the hot tub together with catatonic Cameron in a chair on a diving board, because, you know, that's a safe place to put your best friend who's out of it while you make out nearby.

The chair on the diving board is still a stupid place to put your catatonic friend but if this is somehow Cameron's house, that would explain why no one's got a bathing suit. As for the diving board thing...

We know Ferris is a bit of an asshole and clearly quite selfish. Some people don't like this movie because Ferris is such a selfish jerk, and I get that. But, I figure we cannot and should not have only morally upstanding people as our protagonists. Nor must our protagonists be nice wholesome middle-class folk.

And, there is some classist... something going on in this film. I mean, Ferris, Cameron and Sloane are not just taking the day off of school but taking the day off from the whole capitalist system, or the exact opposite, celebrating it, spending money right and left (seriously, check out Ferris' wad of cash 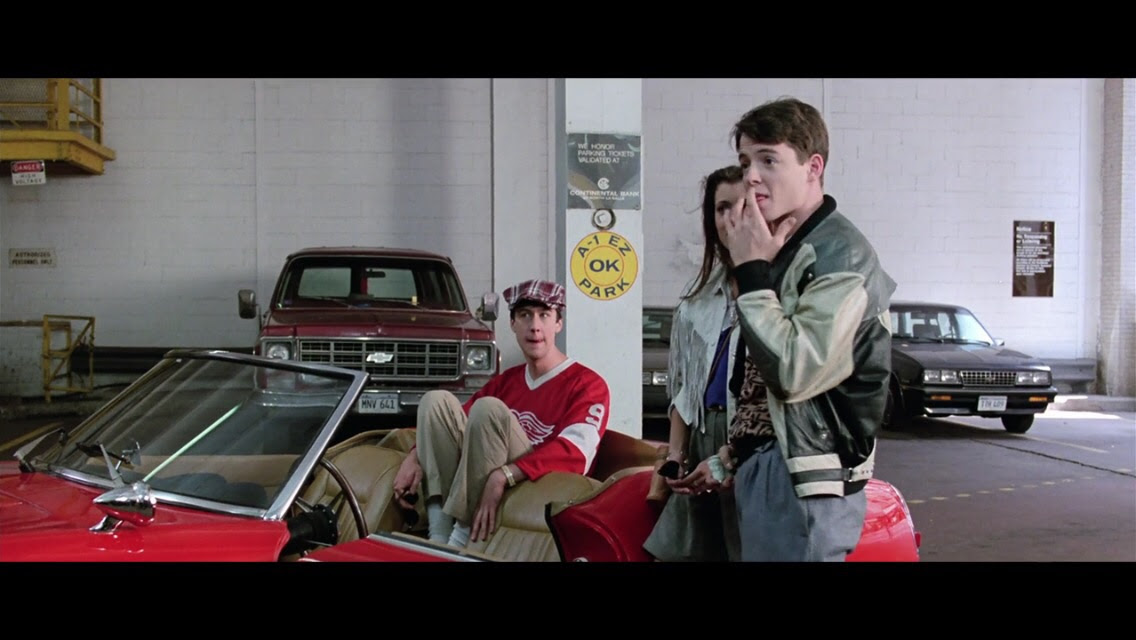 (Speaking of the baseball game, I just noticed something. I think Sloane is doing homework 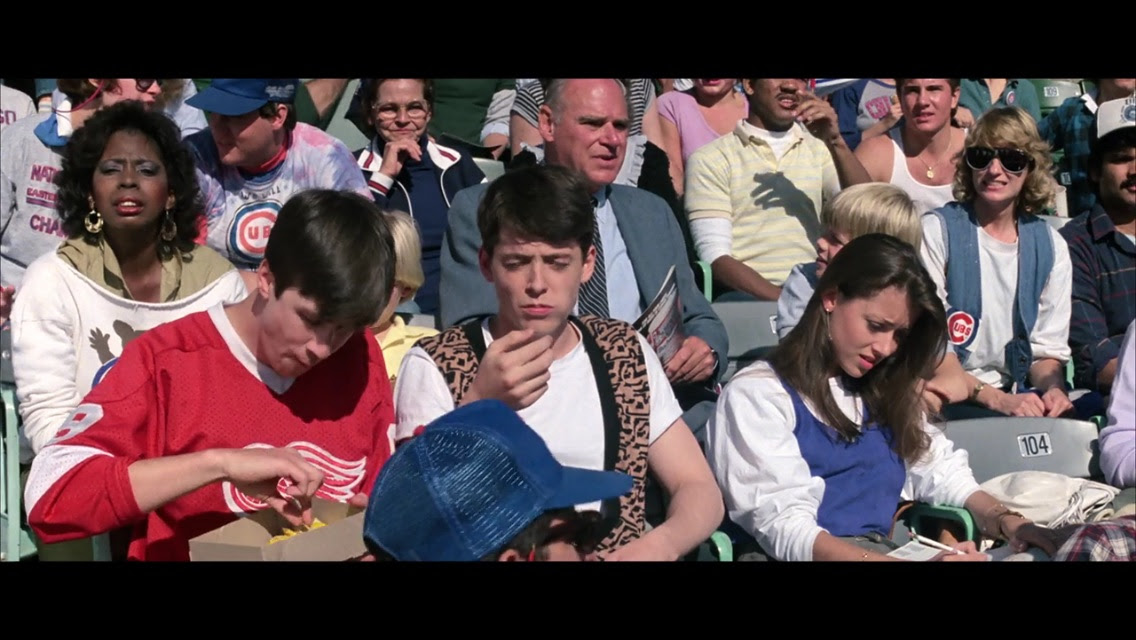 while Ferris and Cameron are enjoying the game.)

Ferris may just save his allowance or whatever, or maybe he deals drugs at school and that's why everybody knows him, but I'm not buying it. Of course, he does associate with people classy (or not) enough to send him a prostitute to help him feel better--that "nurse who likes to--"

(Supposedly, in a cut scene, Ferris tricks his father into mentioning where some bonds are in the house, which presumably he cashes at least one in and that's the money he's spending.)

Simply put, Ferris has money, Cameron's got money (or Morris Fry does, anyway), and Sloane's probably got money. Conspicuous consumption (or evidence thereof) is all over this movie. The Bueller house has a freakin' intercom at the front door, for Phil Connors' sake.

(Alas, that last phrase is an affectation I have neglected.)

The intercom was fake, by the way, added for the movie.

Anyway, maybe Ferris is being snotty to the waiter at Chez Quis just because the waiter was being snotty to him before, but there is something in that particular scene which evokes class differences. Ferris is playing at a higher class than he really is... sort of. I say "sort of" because Ferris' father has also apparently dined at that same restaurant for lunch that day. Sure, it's a business lunch and he was probably trying to impress his client, but you do business lunches like that often enough, you've got to get accustomed to that certain lifestyle.

On the other hand, Jeanie may have her own car--

(That car was purchased at the same time as Ferris' computer, and both would have cost a bit of money. Plus, Katie Bueller says she was going to use the commission from the house sale she didn't get to make on the day in the film to buy Ferris a car.)

--but she doesn't seem stuck in some upper- or middle-class lifestyle. Hell, she makes out with that drug -dealing? -using? guy at the police station a matter of minutes after meeting him. Maybe it's teenage rebellion, maybe she just doesn't see him as that much beneath her.

You know, before I end today's entry, I must admit, there's a chance Sloane's family is entirely poor... by mid-80s America standards. Which would still be pretty good. And maybe, that's why she is doing homework when they're at the Cubs game--she can't afford to do badly at school because she needs good grades to get into a good college and earn some scholarships.

I will leave you with one last thought today--a question: how the hell did Ferris and Sloane even manage to put Cameron on that diving board? I mean, seriously, how?