into the light of the dark black night

Again, with Prudence. Aside from a few other women in the Vietnam sequence--and, apparently, she's one of them--she is the only Asian in the cast. Jo-Jo isn't quite the token African American, but he's close. And, his introduction plays on his race as a token story inclusion. The cover of "Let It Be" in this movie is amazing but the Detroit riot sequence as an introduction to Jo-Jo, in retrospect, is a bit... trite, obvious, manipulative, and simplistic. Nucho (2007) points out, rightly, that "revisiting the Detroit riots with a gospel version of "Let It Be" blaring in the background; in fact, it's a rather self-serving, arrogant gesture to use a Beatles song to represent the revolution against hundreds of years of brutality and racist oppression in the U.S."

The problem is cultural/racial appropriation. There is no in-story reason for Jo-Jo to be African American. Sure, he's our stand-in for Jimi Hendrix, but when your story is structured as a musical, you don't need a diegetic excuse for someone to sing. That is, we don't need Jo-Jo or Sadie to be singers for them to sing. So, Jo-Jo does not need to be a Jimi Hendrix stand-in.

Nor does Sadie need to be a Janis Joplin stand-in, but that is a little less problematic since she's white... but maybe it's problematic to make that distinction. I mean, is it reasonable to suggest a racial element to the inclusion of Jo-Jo while dismissing the inclusion of Sadie. Or, for that matter, including Daniel, giving him absolutely no dialogue or depth, only to kill him off to motivate Lucy.

I can't help but reference a screenplay I wrote back in 2003 called "Fugue." It's got a breaking-the-fourth-wall ending in which the main character Persy, who has been tortured, forced to travel between two different worlds and generally had a shitty life, turns to the camera and tears down the cinematic frame around her and--SPOILERS for an old, unproduced screenplay you'll never even see anyway--talks to the us in the audience. "You cannot put me through all of this," she says. "I am not just some mindless fiction, some blank slate on which you can hang your hopes, your dreams and your fears idly." (Or, use as an excuse for a nice cover of "Let It Be" in the case of Jo-Jo.) "You do not just get to sit there watching," Persy tells us. "This may all just be a story for you, sitting there with your popcorn and your fountain drinks. But, that does not mean it does not hurt." She takes off her shirt and shows off "scars that wrap all the way around" her torso. She has been whipped repeatedly, and on several occasions. "These scars are not just makeup to me," she says. "Every line hurt. Every line still hurts... My pain is not for you to put in your memory with all the fictions you have read or seen... Leave me alone. Go home. Live your own lives... I do not have the strength to amuse you anymore."

Thing is, I'm manipulating the audience by having her point out the consequence of us watching her story. I'm appropriating her experience just as much as Julie Taymor et al appropriate Jo-Jo's experience (or Sadie's or Jude's or Lucy's or any other character). Except for one important distinction. Jo-Jo, as the token African American (yes there's an African American supporting character but she's in like two scenes and has about as many lines), represents something much bigger than Lucy representing, say, the antiwar movement, or Max as a draftee. Plus, I think their plotlines get more coverage and more depth; Jo-Jo's amounts to, hey it's a race riot, hey it's a gospel song, now onto New York. Just like I argued yesterday Prudence's storyline doesn't quite play out the implication of its introduction--her status as a lesbian becomes increasingly meaningless and unrelated to the plot--so does Jo-Jo's introduction imply something that his storyline does not play out. His introduction implies a story about race, about the violence erupting from the racial divide in 1960s America. Instead, the only violence we see is in Vietnam. It's disconnected from the violence at home. Though Paco and his ilk die in an explosion, we do not see it. 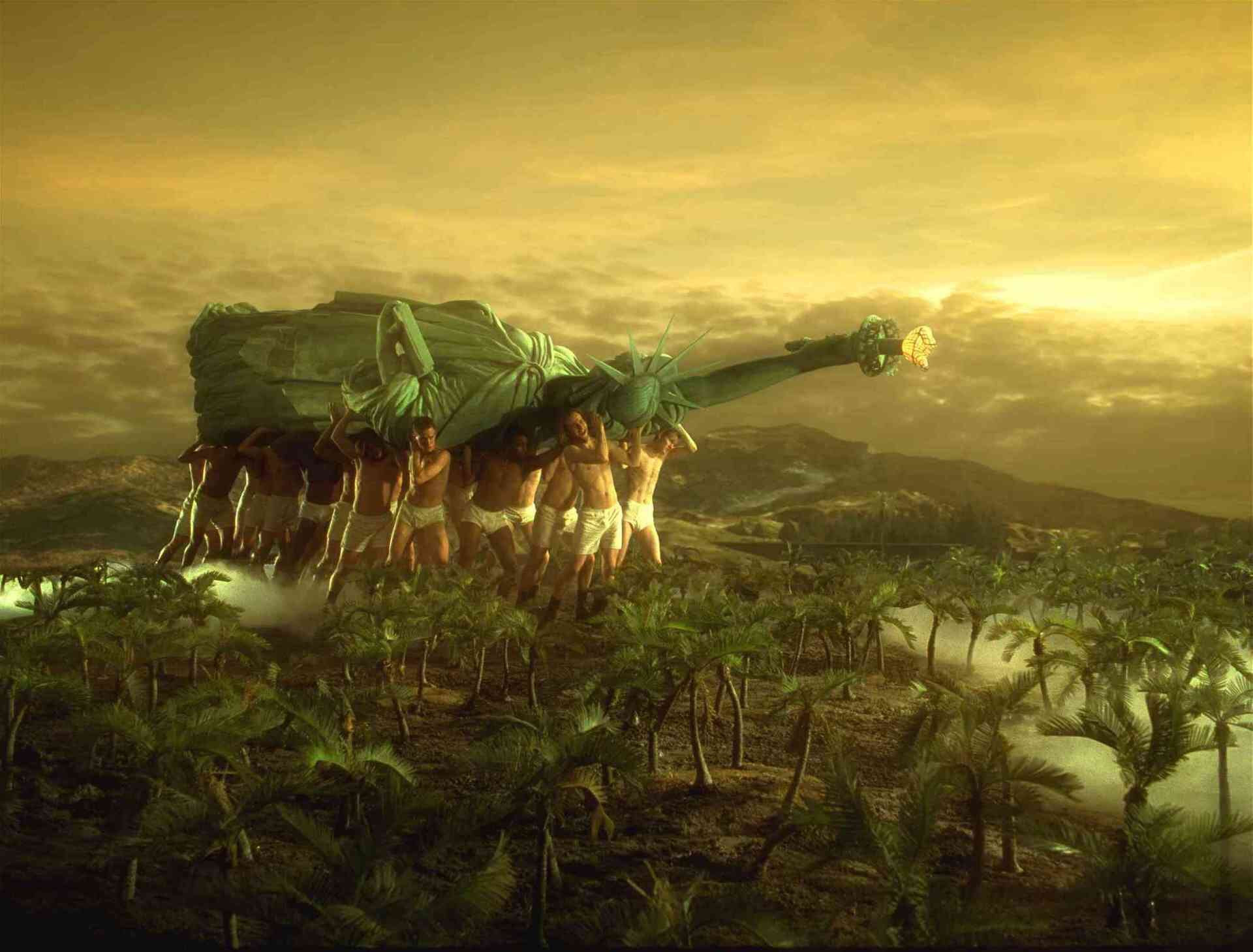 Martin Luther King, Jr. is invoked in the film as well, though the racial story has remained nonexistent since the riot scene. And, really, while it fits the historical setting, within the story, it serves only to give an excuse to Martin Luther McCoy's cover of "While My Guitar Gently Weeps."

And, as I type that, those Asian women painted white have just died. And, I don't get why they are white. I wonder if Taymor is deliberately disguising race to make a point... In an interview with pro.boxoffice.com regarding her adaptation of The Tempest, Taymor says, "I don't think Shakespeare is racist--I think he is reporting the situation, which was Colonialism. And he's showing it up... He puts mirrors on everything."

The question is, s Taymor putting a mirror--or a magnifying glass--on the 1960s, or is she merely appropriating a troubled time--and a whole history of racism, slavery, colonialism and exploitation--as an excuse to remix some Beatles songs?

Ultimately, Taymor just doesn't seem that interested in actually examining the 60s or the issues on display here. As Robinson (2007) puts it, "The movie seems more interesting in simply reminding us of everything that happened, which is in itself a laudable goal. We could use more reminding." When I was intending to be a history teacher and not a speech teacher, I wanted to use this movie as an overview device when covering the 1960s, but while the film has counterparts in the historical reality, there would have to be an examination into the reality behind the movie. The movie could only be a starting point, but perhaps an interesting enough starting point to garner interest that might not be possible otherwise. Across the Universe is not a particularly informative history lesson, but it definitely captures the feel of the time, even if in pieces.