Despite its flaws--see any of the previous entries regarding the sexism and casual racism on display in the film--Porky's is actually a pretty good example of film. Scenes that might seem superfluous at first blush (Brackett and Honeywell, perhaps; Tim and his father (assuming you discount my coded homosexuality theory), the "Princeton sucks" half of the Deadbeats scene) actually support the general themes fairly well. Plotwise, there are two threads of the same theme going on in this movie--the Angel Beach boys are trying to become men by getting laid and seeing girls naked and they like to play pranks on one another. The latter starts with the eggs, plays through the Cherry Forever sequence, the giant condom (for which Pee Wee gets revenge with the Mike Hunt phonecall), and which ultimately explodes quite fluidly into the destruction of Porky's. The former twists and turns through the interaction between Meat and the freshman girl, just about every appearance of Balbricker or Honeywell, every appearance of Wendy, Cherry Forever, Miss Walker and the girls in the shower, and of course Porky's. It all adds up to an atmosphere where sex hovers over everything. Essentially, the film puts the audience inside the twisted, hormonal mind of the teenage boys at its center. 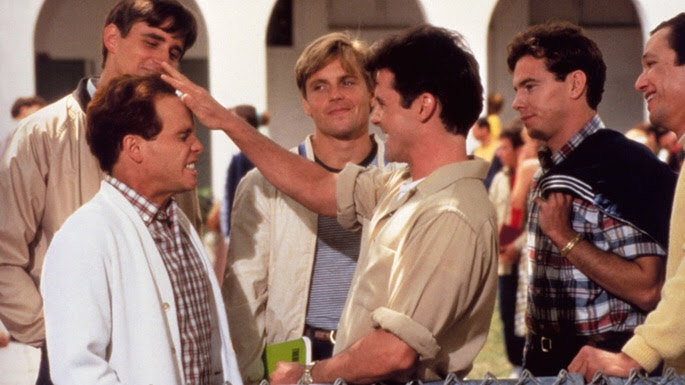 Arguably, the real meaningful center of the film, if there is any, comes from what could be considered a superfluous subplot--Tim and his abusive father. Take the scene that was just on as I'm typing this: the police drop Pee Wee off at Deadbeats and it's all not-so-innocent fun in the aftermath of the Cherry Forever prank. Then, there's a brief personal moment, Officer Jarvis telling Mickey that he and his wife and kids will be coming over that weekend. And, then the next beat is also personal but much darker. In the space of a minute the film takes us from boys-will-be-boys fun to something personal (but good) to something personal (but bad). Cavanaugh arrives, with a silent girl on the back of his motorcycle, beer in hand. Officer Jarvis gets him to throw away the beer, but then Jarvis leaves and there is no authority beyond Cavanaugh (as father) in getting angry (and physical about it) with Tim. Effectively, the film has critiqued the boys-will-be-boys attitude with the abusive father storyline while using both to support the overarching patriarchal power structure. The same social/cultural forces that set these boys up for pranks like the Cherry Forever bit are what make an ex-con father think he still has authority over his son. Beyond that, those same forces are the reason Cavanaugh is upset with his son over running from a black man, and, the reason Tim has a problem with Brian Schwartz. It's bell hooks' "white supremacist capitalist patriarchy" at work. (And, as I type that, Mickey and Pee Wee are negotiating with Porky to buy time with his dancers. Wonderful timing.)

(Weird sidenote--well, it would be weird if I didn't once write an entire blog entry about the color blue: all five Angel Beach boys who go to Porky's at the beginning of act two are wearing light blue.)

The particularly positive element in the film, then, is that Tim and Brian become friends, that Cavanaugh is beaten (though it may have been better if Jarvis actually had arrested the guy), and the casual racism is left behind.

There's an important exchange halfway through the film--right after Tim and Brian have their fight--Billy and Tommy are talking to Brian:

Look, Brian, Tim's our buddy. But you gotta understand, he's got problems.

It's easy for him to take it out on you 'cause he thinks you're putting him down. He's not a bad guy.

And, I've been there. One of my best friends in school as a kid was a bit of a bully and one of his regular victims was also my friend. It made things weird sometimes, but that didn't stop me from still being friends with them both. At a certain age, you just cannot stick up for what's right, even if you want to. There's an ethical grey area where boys will be boys, and standing up for one may cost you the friendship of another. Plus, adolescents are inherently stupid and incapable of making good decisions.