the only way i do business

Porky's begins on the morning of April 12, 1954. Pee Wee's radio tells us so. The thing is that day was "the most boring day in history" (actually, since 1900 but who's nitpicking?). Apparently, William Tunstall-Pedoe, a computer scientist at Cambridge, pronounced it as such. He's got a search engine (sort of) called True Knowledge (which also includes Evi, Siri's competition, perhaps) that, as a sideline searched for boring days. Geek.com tells us, Tunstall-Pedoe fed "300 million news facts, including people, places, and events" into the program and April 12, 1954 (though the Telegraph says it's April 11, but that's probably just a British thing, time zone differences and whatnot) came out as the most boring day. Telegraph describes the "complex algorithms" involved, "such as how much one piece of information was linked to others." Geek quotes Tunstall-Pedoe, saying:

Nobody significant died that day, no major events apparently occurred and, although a typical day in the 20th century has many notable people being born, for some reason that day had only one who might make the claim--Abdullah Atalar, a Turkish academic.

Amusingly, the Geek piece says that Atalar is pictured, but his picture is no longer included with the article; that's how boring he is.

Unfortunate note, as I was going to get into a good ramble about getting lost in obscurity and then get into just how awesome the Angel Beach boys' April 12 is (seriously, from the beginning of the film through the Cherry Forever prank to the bit with Tim's father outside Deadbeats and the definitive decision to go to Porky's--that is all the 12th. Basically, all of act one). But, then I made the mistake of doublechecking the date from Tunstall-Pedoe's findings. And, damn it if not only does The Mary Sue side with the Telegraph but Wikipedia denotes April 11, 1954 as "the most boring day in the 20th century", citing the Telegraph piece. If the fact being in Wikipedia doesn't make it true, I don't know what does...

Of course, I recently edited the Groundhog Day page again--this time to include reference to this blog by way of Schulman's The Accidental Swami piece--and that edit doesn't even seem to show up on the page history let alone still be there. Obscurity--thou art mine.

Not that I've got a problem with that. I was talking about this blog the other day, and I argued that because my regular readership is quite small, with others popping in here and there, some entries grabbing a little more attention than average perhaps, I can do just about anything I want to do here. As long as what I write fits the stated justification--it has to connect in some way to the film I'm watching on a given day--I can take things in whatever direction I see fit... and sometimes I can force the topic I want with naught but a tangential connection the film. I can use this place to show off a paper I've written (like here) or write a new one (for example, here). I can throw in personal details, philosophize about life and society, or just critique the film. Because, you know, some basic critique might as well happen from time to time in a blog devoted to movies.

If I suddenly had a huge readership, there might be expectations. I don't want expectations. In fact, I think it's the freedom that comes from no outside expectations that allows me to, well, not only make all of this up as I go along but to essentially invent myself anew in the process. (And, this goes out to future, thesis-writing me.) Having an outlet for whatever I want to write about has allowed me to reinvent myself, to turn myself into... not someone new, but a better version of me than I was before. Not unlike Tim Cavanaugh turning into a better version of himself in the context of this film.

See what I did there? I twisted it right back into the film. 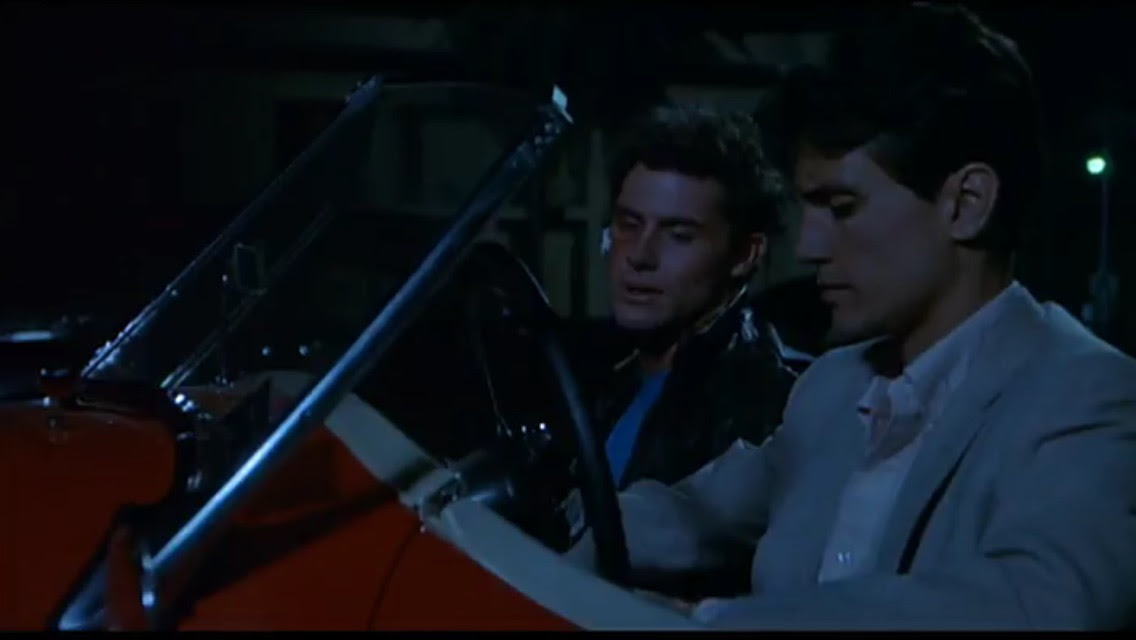 For the record, the Angel Beach boys will not go down in obscurity, of course (and not just because they've got two sequels). Even if the most boring day of the century was the day before this story of theirs gets going, then we can take this as them doing their part to make the century exciting again. I mean, just look at the end of the film. Not only have they just destroyed Porky's (and probably guaranteed Cherry Forever a better payday for a while), they return to Seward County and are immediately celebrated. The high school band, the majorettes they spied on in the shower, and others are gathered around to celebrate and witness to the Angel Beach boys' victory over Porky's tyranny.