its no huge thing; it's just sex

(A quick note: I forgot to mention that yesterday I passed my prospectus defense so I will be going forward with my Master’s Thesis about the creation of this blog.)

In the film, you might get the idea that she’s the resident expert on sex at Ridgemont High, but only barely. In the script I found (again, I’m not sure what draft this would be, there’s no cover page) there’s more to her scene with Stacy after she (Stacy) has talked to Ron in the mall, and there’s an extra scene of Linda at Ridgemont early on.

First, the bit at the mall, after hours, movie version:

Stacy: Linda, did I show you this? He gave me his card. “Ron Johnson, Audio Consultant.”

Linda: Maybe we should, like, get a frame for this and put it up on the wall.

Stacy: Come on, Linda, you’re the one who told me I was gonna get a boyfriend at the mall. (BEAT) Do you think he’ll call this week?

Linda: Stace, why don’t you just call him?

Linda: Yes, you can. Guys love that sort of thing.

Linda: Yes. Stacy, what are you waiting for? You’re fifteen years old. I did it when I was thirteen. It’s no huge thing; it’s just sex.

Linda: If I didn’t have a fiancé in Chicago, I’d go for it.

Pretty simple. Then we cut to the school montage. But, that conversation has a little more meat on it in the script.

Stacy: He gave me his card. “Ron Johnson, Audio Consultant.”

Linda: Should we buy a frame for that?

Stacy: Come on, Linda. I haven’t had a boyfriend all summer. You promised me when I started working at the mall that my life would change... Do you think he’ll call this week?

Linda: Listen, Stace, you want to know about guys? I’ll tell you. They’re mostly chicken. Before I met Doug I chased after every guy I thought was cute. I thought if I gave out a vibe they’d get the message and call me up. Well, guess what? They don’t call.

Stacy: So what did you do?

Linda: I called them. If I was sitting next to a guy and I wanted to sit closer, I’d sit closer. If I wanted to kiss him, I’d just do it. You want Ron Johnson? Grab him.

Linda: Face it. With some guys you have to make the first move. A lot of guys are just... wussies.

Linda: Stacy, what are you waiting for? You’re fifteen. I did it when I was thirteen. It’s no huge thing. It’s just sex. If you don’t, one of the other girls will.

Linda: If I didn’t have a fiancé in Chicago, I’d go for it.

The general gist is the same, but Linda comes across less like a know-it-all teenager, sure she knows everything just because she’s a teen, and more like someone who really already went through the same shit we’re going to see Stacy go through in this film and came out a little stronger, and a little wiser, on the other side. And then, the script goes straight into another conversation with Linda and a young girl who catches up with her and Stacy.

Girl: Are you Linda Barrett?

Girl: I’m Carrie Frazier from Toys ‘R Us. Judy Hinton from May Company told me I could ask you something.

Already, this is setting up a much more interesting version of Linda. She’s known around the mall and presumably around the school and around town for being someone who knows stuff.

Girl: I have this situation with me boyfriend, and I wanted to... (looks at Stacy, then whispers in Linda’s ear)

The script tells us “Linda listens thoughtfully, then clicks into her ‘sex expert’ mode."

Linda: Okay, are you over sixteen?

Linda: All right, what you want to do is go to the Free Clinic and tell the doctor that you have sex regularly—several times a week—and that you need Nornel One Plus Fifty’s.

Girl: And they don’t call my parents?

Linda: Not if you’re over sixteen.

That last bit would freak out any conservative folk in the audience, but it both gives Linda more depth and suggests a sense of responsibility regarding teenage sex that—not to harp—Ebert and Schlussel just don’t get.

Girl: Okay. Thanks a lot, Linda.

Linda: And don’t let them talk you into a diaphragm either.

Linda almost seems like a feminist character here, pushing Stacy to be the active pursuer of Ron, helping that young girl have some independence.

(So, I’m scrolling down the script—I may try to read the whole thing tomorrow—and I notice that at the end of their date, it is Stacy who says it’s getting late, not Mark. Script Linda is rubbing off on script Stacy. I like Linda’s affirmation of Stacy in the film after Stacy’s date with Mark ends badly. “He’s a sixteen-year-old usher in a movie theater. You have dated older guys. You work at the best food stand in the mall. And you are a close personal friend of mine.” So arrogant... and so right.)

So, then, the scene at the pool. There’s just minimal dialogue before Mark and Damone show up in the movie, but in the script, Stacy is reading from her mom’s “secret book” Total Orgasm. In the movie, it seems more like she’s reading a quiz from Cosmo or whatever magazine would have been the equivalent in ‘82. She‘s educating Linda—and, by extension, the audience, just as Linda was educating her in the cafeteria. For example:

Stacy: Listen to this... ‘What are your mate’s three most erogenous zones?’

Stacy: Wouldn’t penis and balls be the same category?

Here’s where the scene gets started in the movie.

Stacy: Does that ever happen?

Stacy: Listen to this... it says ‘Most women derive pleasure from sex, but they don’t have real orgasms.

And, we find out that Doug works for “the airline.” That’s why he’s in Chicago.

Move forward a bit to the big fantasy bit. Actually, backtrack first to Linda’s introduction in the script. She is described as “the seventeen year old, retired sex queen of Ridgemont High.” No physical description other than that, until BRAD’S DAYDREAM...

It features Linda Barrett, just as she stood on the diving board a moment ago. She is gorgeous. Her breasts seem even bigger than usual. Her nipples are hard, poking through the film maroon string bikini. Water rolls slowly down her cheeks, into the corners of her mouth. Her lips are parted slightly. Her eyes are filled with desire as she says...

LINDA
Hi, Brad.
(pause)
You know how cute I always thought you were. I think you’re so sexy. Will you come to me?

ANGLE ON BRAD IN DAYDREAM

in a nice shirt, his hair combed back and looking great. He walks to Linda. She reaches out and grabs him for a kiss, pulling him close. Then she pushes him away, so he can watch as she carefully unstraps the top of her bathing suit. The incredible Linda Barrett’s breasts fall loose.

She takes Brad’s hands and places them on her, as she begins unbuttoning his shirt. They are just about to fall into passionate lovemaking when we hear... 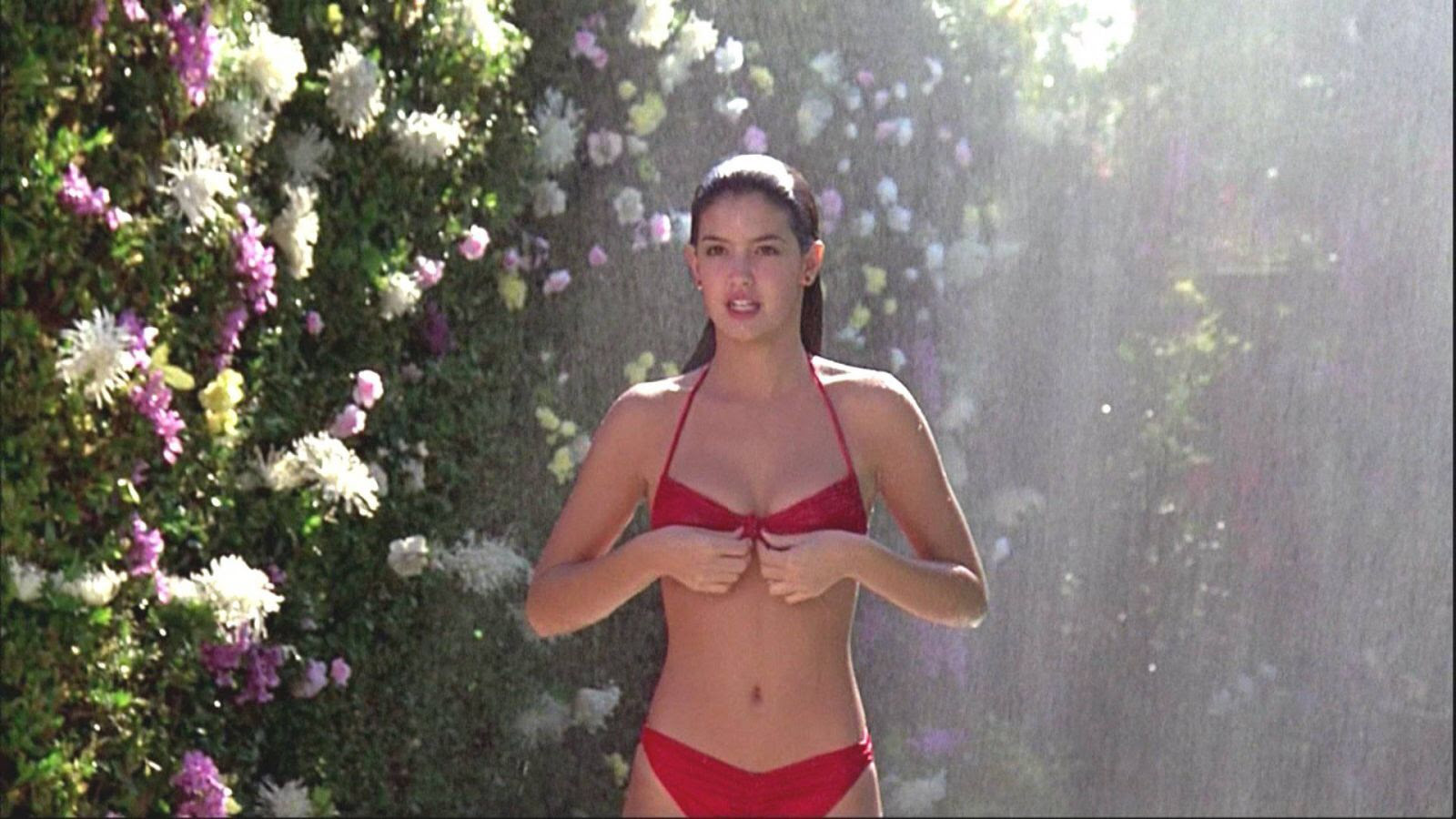 The key to the movie version is that while the fantasy is a little more choreographed and fluid, it is interrupted even before Linda interrupts Brad. Effectively, the movie version cuts off even more before a potential climax than the script does. We’re given a fantasy—one that plenty of young men and boys surely enjoyed while watching and... later—but then we’re yanked out of it abruptly. The film is not letting us climax. It can’t. Though Schlussel tells us the film glamorizes teen sex, but it actually refuses to do just that. (It only fails because any fantasy, no matter how much it may be cut short, can be expanded in the minds of the boys—and girls—who watch the film and want to think on it later.) As Ebert points out, the film presents us sex that is not particularly pleasant.

Fast Times at Ridgemont High does not glamorize sex. It quite readily does the opposite.

And, Linda is not a sexual fantasy. What she should be is a role model for teenage girls, taking control over her life, including her sexuality, and standing up for her friends.