that seducer and despoiler must be stopped

For the record, I would have rather had more research and depth for yesterday's entry. Given the short time frame I've got to research stuff for this blog, I just couldn't find a good source about queer coding in cinema. Found a few sources talking about how certain characters in, say, 1950s' films can be understood as gay even though their films could not really have them be, given the Hays Code. But, they just didn't get into details about what aspects of a character demonstrated coded homosexuality. Unfortunately, the topic proved more complicated than I had hoped.

But, life--and this blog--goes on.

The starting point today is a bit from Ebert's (1981) review of the film. He tells us that "the film doesn't like women [and so] its sex scenes all create fear and hostility." I got into this a bit the last two days, and I must at once both agree and disagree with Ebert's sentiment. On the one hand, I do not believe the hostility and fear to be particularly deliberate. But, on the other hand, I do believe that it is there. Case-in-point, the Cherry Forever sequence--on right now--revolves around deliberate objectification of women as well as racist paranoia--Pee Wee is warned earlier that she "lives with a black stud" and that "black stud" presents an imposing figure to all these suggestible white boys. His danger is even more exoticized than Cherry's sex.

Miss Balbricker's obvious joke of a name suggests a fear of women, women in power for sure. Miss Honeywell, aka "Lassie" suggests another side of the same problem. On the one hand, Honeywell suggests a foodstuff, to be consumed and forgotten--in fact, after Coach Brackett has sex with Miss Honeywell, she is all but forgotten by the film. The "Lassie" nickname essentially dehumanizes her while at the same time accenting the thing that makes her sex scene little but a joke. Sex in this movie is never healthy, and never shot in a manner to make it particularly arousing.

There are two scenes that should be arousing--the strippers at Porky's and the girls locker room bit. But, both of those are edited so as to make them awkward and, well, just sort of wrong. A customer grabs the stripper and she kicks him even as her dance is crosscut with the band, distracting from any possibility of arousal. The shower scene has a similar crosscut problem, even before introducing "Blubber" McNeil.

(And, the presumption that this overweight girl couldn't possibly be attractive in any way, suggests a whole other level to the objectification of and hatred toward women.)

It jumps back and forth between the naked girls and the spying boys that while it definitely suggests a male gaze to the entire film, it doesn't allow that gaze to linger. It interrupts our Freudian scopophilia. The film would rather spend time with the boys than let us ogle the girls as much as they do. And then, the hostility comes into play again. Tommy puts his tongue through the hole in the wall and seems to actually expect something good to happen. Instead, Wendy puts soap on his tongue. So, he escalates the situation--his right to be a sexist prick has been challenged--quite famously putting his penis through the hole only to have Balbricker grab hold of it. Balbricker--and Wendy for that matter, even though she seems mostly accessible--represents a threat to the whole boys-will-be-boys attitude at the heart of this film. That makes her a threat to the patriarchal order in the world. 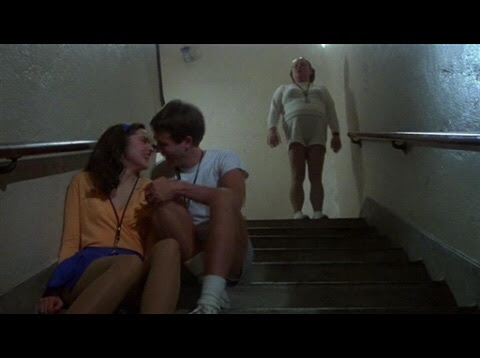 I don't buy into Mulvey's (1989) argument about women representing the lack of phallus in film, but this film definitely draws a clear divide between the sexes, and it positions males fully on the side of, well, being able to do whatever they want to do, including violence and wanton destruction of property. Males can get away with anything in the world of Porky's. One might take Honeywell's standing up to Balbricker as some sort of feminist stance, that she is choosing to go up to the supply room to have sex. But, really, she only serves to advance the patriarchal side of things. There is no choice for her if Coach Warren has told Coach Brackett how to manipulate her into sex.

What Porky's is really about is a bunch of boys trying to be men. Their plan is to go to Porky's and get laid--because that is symbolic for them. In Lacanian terms, the symbolic gesture is entirely masculine, and per American ideology, a boy becomes a man when he beds a woman. Even when we pretend we want that bedding to happen within the bounds of marriage, really, we don't care because men are in charge an boys will be boys. In Freudian terms, there's a bit of killing the father to become a man as well, if we take Porky's (and Porky) as the father who is in the way of these Angel Beach boys from becoming men. In particular, we should take Pee Wee as our throughline. The film begins with his erection and ends with him losing his virginity. He serves as the synecdoche for the rest of the boys. With Porky's destroyed, and the high school band celebrating as if singing chivaree, Pee Wee is finally able to consummate his relationship with Wendy that has been an ongoing subplot since before the opening scene. The potential upset for the patriarchal order has been destroyed. All is right in the world of Angel Beach.

Even as Balbricker tackles Tommy to the ground to ID his tallywhacker.