INT. STACY’S ROOM - ANGLE ON STACY IN HER ROOM

In the middle of changing, she has caught her own reflection in the mirror. She pauses a moment, looking at the young girl looking back.

This is Stacy just before she has sex with Damone in the script. This is the same Stacy who, the day after she has sex with Ron, says, “It’s just sex.” (Linda’s response, by the way: “Hey! That’s my line!”) I don’t mean to keep coming back to Ebert but his take on Stacy is not entirely inaccurate: “She’s curious about sex, so the script immediately turns her into a promiscuous sex machine who will go to be with anybody.” Well, I’ve already pointed out the basic inaccuracies there—that 2 1/2 partners over the course of 9 months is hardly promiscuous. This is normal. 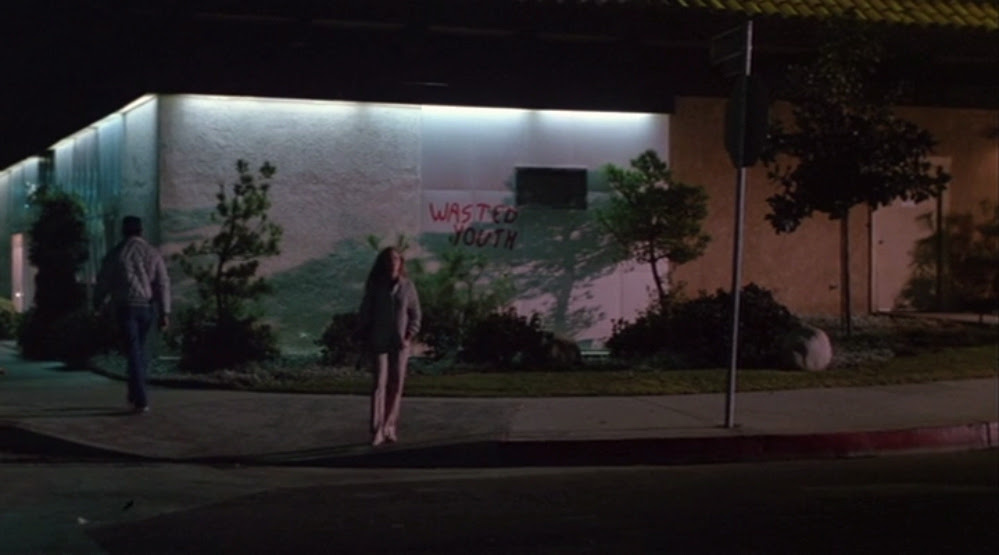 After the flowers, after Lisa offers up a good line—“I don’t want to have to use sex as a tool”—Brad and Stacy actually talk about sex. Before Brad tells it to the mirror, he tells his little sister, “I’ve been doing some thinking. It’s my last school year. I’m a single, successful guy. I think i want my freedom.”

“Why,” Stacy asks. “Because she won’t sleep with you?” Brad admits that is the truth and Stacy asks him if he’s still a virgin. “Maybe yes. Maybe no.”

“But your face did!”

They laugh. Then Brad turns serious.

“Are you still a virgin?”

And, when it comes time for Damone to be alone with Stacy, in the script, it’s a little more obvious that Stacy is instigating things. She tells him to pick a bathing suit, and he responds, “I don’t know. It’s getting pretty late...” Sounds a bit like Mark. He leg shakes and Stacy asks him, “Are you really a virgin?” She has effectively replaced Ron, Damone replacing her. “It’s okay if it’s your first time,” she reassures him.

“Listen,” Damone says, “I feel pretty strange here. Because Mark really likes you, and he’s my friend.” Now, on the one hand, this could be taken as Damone showing The Attitude, but it quickly becomes apparent that he is nervous, that he is all attitude and not experience. She asks him if he’s shaking. “No,” he replies. “Are you crazy?”

The script tells us, “It is clear that this is far as Mr. Attitude has ever gotten with a girl. Stacy takes the initiative, rubbing her hands through his hair, rubbing his sides, kissing his neck, then pulling away.” Then, just as in the movie, she suggests he take his clothes off. But, once they are naked in the script, there’s one more exchange of dialogue. Stacy tells Damone, “I want you to know that it’s your final decision if we should continue or not.” Stacy practices fairly well what’s called “affirmative consent.”

Tara Culp-Ressler at Think Progress tells us that the affirmative consent standard, recently subject of a bill here in California, is not about a constant string of verbal affirmatives, but “it’s more about broadly reorienting about how we approach sex in the first place...

The current societal script on sex assumes that passivity and silence—essentially, the “lack of a no”—means it’s okay to proceed.

[Her first time, with Ron, Stacy never has the opportunity to say “yes” but the movie suggests that she is entirely willing and eager]

That’s on top of the fact that male sexuality has been socially defined as aggressive, something that can result in men feeling entitled to sex...

[Look at Stacy after Mark is unable/unwilling to go ahead with sex. The film definitely suggests she felt entitled to, and she certainly expected sex. And she is disappointed.]

Maybe the thing that bothers Ebert and Schlussel is not that there’s sex in this film or that it a) plays a little too uncomfortably or b) glamorizes it, but that the sex is presented as something a young woman can initiate. The norm, this is not. Hell, the transition of Damone finding first his car with PRICK spray-painted on the door then “LITTLE” PRICK painted on his locker to him in naught but a towel in the locker room, seems quite deliberate, making Damone visually vulnerable. The movie makes deliberate effort to put Stacy (and then Linda on her behalf) in the aggressive role, Damone in the submissive role. We could take Linda’s anger (and spray painting) as a bitchy stereotype, or we could take it as acceptable female aggression at the tail end of the second wave of feminism. Culp-Ressler continues:

Under an affirmative consent standard, on the other hand, both partners are required to pay more attention to whether they’re feeling enthusiastic about the sexual experience they’re having. There aren’t any assumptions about where the sexual encounter is going or whether both people are already on the same page.

[Some debate whether this would kill the mood, hence...]

At its very basic level, this is the opposite of killing the mood—it’s about making sure the person with whom you’re about to have sex is excited about having sex with you.

The real debate is that, while obviously this is a nice idea, it is difficult for some to imagine what this looks like in reality. If some men (or women) already can’t tell (or don’t care) if they are on the “same page” as their partner, it would take more than a law (if such a bill would ever pass) to change our ability to read each other better... or an overhaul in how we interact across the board.

It wouldn’t take much. We just need to stop objectifying one another, treat each other instead like actual human beings with rights and free will. We just need to never assume that anyone owes us... well, anything, when it comes to sex. That isn’t much, right?

In the end, Stacy tells Linda that she doesn’t want sex, she wants romance. On the other hand, Linda tells Stacy, “There’s a world of guys out there. I just wish I didn’t have to date any of them.” They’re both kind of on the right track.

The important thing to figure out is, does Stacy being sexually aggressive work as a feminist statement or a warning to men coming off the second wave of feminism?

At the end of the film, we are told that Mark and Stacy are having “a passionate love affair” but they “still haven’t gone all the way.” The idea that sex and passion are separate—that should be a positive message, not something to be afraid of. Just like a young woman making her own choices about sex should not be such a bother.