you grow up, your heart dies

Pale Rider (which I may watch in my upcoming month of westerns) in its opening weekend is #1. Cocoon in its 2nd weekend is #2. Rambo: First Blood Part II (which I already covered back in January in this blog) in its 6th weekend is #3.

And, Andie MacDowell--Rita Hanson herself--is in this movie... Oh, I'm not watching The Breakfast Club just yet. Started the blog a little early. I'm watching St. Elmo's Fire first. Wanted to explore the whole "brat pack" thing a little bit before my week with The Breakfast Club is through.

St. Elmo's Fire--which stars (among others) Judd Nelson, Ally Sheedy and Emilio Estevez as college graduates the very same year they starred as high school students in The Breakfast Club--is #4. Goonies in its 4th weekend is #5. Fletch in its 5th weekend is #6... and then you get into movies I didn't see in the theater. Lifeforce at #7. Prizzi's Honor at #8... actually, I may have seen that in the theater and just didn't get it. Return to Oz at #9. Then, A View to a Kill, Brewster's Millions and Beverly Hills Cop, all three of which I saw in the theater, at #10, #11 and #12, respectively. In fact, I think Brewster's Millions was actually seen at a drive-in with the beginning of A Nightmare on Elm Street... yes, the beginning of; apparently, that movie was too much for my mother or she thought it was too much for me, and we left. Of course, I spent our exit drive looking out the back window at the movie.

Coined by David Plum in New York Magazine, 10 June 1985, the "Brat Pack"--according to Cracked, consisted originally of Emilio Estevez, Anthony Michael Hall, Rob Lowe, Andrew McCarthy, Demi Moore, Judd Nelson, Molly Ringwald and Ally Sheedy... "Despite what Hollywood says," Cracked tells us, "those are the real Brat Packers." Others would get included here and there, but basically the Brat Pack was a mix of cast members from The Breakfast Club and/or St. Elmo's Fire. In that original New York article, Plum tells us the Brat Pack "is to the 1980s what the Rat Pack was to the 1960s--a roving band of famous young stars on the prowl for parties, women, and a good time." A little sexist, but probably not entirely inaccurate. Plum continues: "And just like Frank Sinatra, Dean Martin, Peter Lawford, and Sammy Davis Jr., these guys work together too--they've carried their friendships over from life into the movies." And vice versa. The cast of The Breakfast Club celebrate Anthony Michael Hall's 16th birthday, for example, together at Chuck E. Cheese. Despite Cracked's list, Plum lists Taps (no one on that list is in it) and The Outsiders (two of them are in it... but Tom Cruise is in both. Plum calls Tom Cruise "The Hottest of Them All" out of the various Brat Packers) as early Brat Pack films. Plum also includes Sean Penn and Nicolas Cage, the former quite prevalent in Fast Times at Ridgemont High (which I watched recently for this blog) and the latter of which debuted in--but had no lines--in the same.

Another weekend, four months earlier: Beverly Hills Cop in its 11th weekend is #11. Witness in its 2nd weekend is #2. And, The Breakfast Club in its 1st weekend is #3. Saw all three in the theater.

This movie--St. Elmo's Fire--is a meandering thing, no obvious throughline, a few too many characters, but it gets at an idea central to The Breakfast Club as well; as Billy (Rob Lowe) explains in the film,

...this isn't real. You know what it is? It's St. Elmo's Fire. Electric flashes of light that appear in dark skies out of nowhere. Sailors would guide entire journeys by it, but the joke was on them; there was no fire. There wasn't even a St. Elmo. They made it up. They made it up because they thought they needed it to keep them going when things got tough, just like you're making up all of this. We're all going through this. It's our time at the edge.

This bunch of friends is having trouble figuring out their lives. They're out of college and at the point where they should be getting on with their lives, but they're a bit stuck on old relationships and turning those into new relationships in some cases... They're acting like bloody teenagers is what it is. (Kevin even has trouble getting Leslie's bra off.) Jules "doesn't know who to be anymore." It's a boat they are all in. As Janet Maslin put it, "[St. Elmo's Fire's] characters are old enough to enjoy the first flushes of prosperity, but still sufficiently youthful to keep their self-absorption intact. But soon enough, they will be forced to give up their late-night carousing at a favorite bar and move on to more responsible lives."

The thing is, the teenage characters in The Breakfast Club have the same basic problem. Old enough that people expect something from them, young enough that they can still be self-centered (if not selfish). Soon, though, they will get out of high school, will (probably) be forced out of their parents' houses, and they will have to find lives to live and live them. 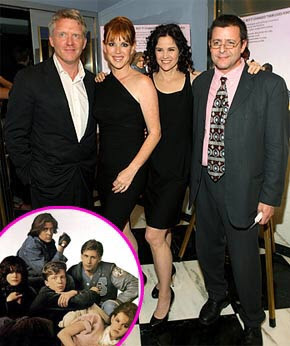 As The Breakfast Club begins, I wonder what happened to Allison Reynolds, Andrew Clark, Brian Johnson, Claire Standish and John Bender... or Richard Vernon or Carl Reed for that matter. Susannah Gora (author of You Couldn't Ignore Me If You Tried: The Brat Pack, John Hughes, and Their Impact on a Generation) in the Washington Post, 26 September 2010, imagines these characters' futures, but I think she aims for the cute more than the realistic. Allison, for example, she has eventually becoming an adolescent psychologist, writing "a best-selling book that encourages teens to retain their individuality and to focus on inner beauty. She often tells her teenager patients, 'When you get old, your heart doesn't have to die.'" Brian "keeps a ceramic elephant lamp in his office to remind him how far he's come." Andy's knee does give out and he ends up at a physical therapist. John joins the army and for some reason is invited to speak at a career day at Shermer High and is inspired to gets his master's in education. "He went on to become one of the most beloved teachers at Shermer high and currently serves as its principal." A little too neat. A little too cute.

The best detail in Gora's piece might be the most poignant and depressing--that when Andy ran into Allison at O'Hare Airport, "they hadn't talked since that day in detention." (She has Claire and John, on the other hand, having an "intense, clandestine romance after their day in detention... followed by an equally intense breakup.")

I imagine things a bit differently--but maybe it's my cynical side rearing its head. Brian probably does okay, but ends up in IT, not something special like MySpace (which is how Gora has it). Allison probably remains mostly friendless as she graduates high school and tries to get into art school. Maybe she gets into art school. And, its the 80s so maybe she ends up at some graphic design company. But, her affair with Andy Clark doesn't last and while there are a string of men in her life, she remains mostly alone. Andy does well for himself. He gets into Ohio State as his father wants, but goes to Oklahoma State instead (Oklahoma State has more NCAA wins in wrestling than any other school.) He meets a nice young woman there and they marry. Eventually, he has a son who he pushes to excel. While he sometimes regrets this, he can't help it because he wants the best for his son just as his own father probably did. He forgives his father and lives a relatively contented life. Claire's future probably goes a little bit like Gora suggests and John predicted. She marries a little too early, "squeeze[s] out a few puppies" and does struggle with her weight. But, like Andy, she is relatively content. Most of the time she even considers herself to be happy. I don't see John joining the military--he didn't really want to be an air force ranger--except maybe to get out of something worse, like accidentally getting one of his many girlfriends pregnant (this is the 1980s and that seems like a perfectly feasible avoidance plan). He puts his shop skills to use working in construction or maybe as an auto mechanic. Something physical. He still smokes from time to time but eventually decides he's too old for it, cleans up his act a bit and settles down with a woman he meets at a bar. She, too, "squeeze[s] out a few puppies" and she gets fat, but he loves her anyway.

Or maybe they remain the best of friends, but only outside of school. Maybe, after graduation, the five of them vow to meet every Saturday morning for breakfast. They eventually stop doing so consistently, but they keep in touch. Many years later, maybe after Allison kills herself after dealing with depression for a long time--wow, this was supposed to be the happy version--they meet up again and when the internet comes along, they regularly email each other updates about their lives. After Claire's second divorce, she brings her car to Bender's Garage in Chicago and the two of them go out to lunch and she figures third time's the charm and they get married and live happily ever after...

Until he dies from a tumor that may have something to do with all the fumes he's been inhaling for decades working at the garage.

Couldn't have too happy an ending.

Andy and Brian attend the funeral, of course. And, life goes on.