people exaggerate so much here

First a nitpick: Lisa should not be in Mr. Hand's US History class. At least, I don't think she's supposed to be a freshman. While a senior (Brad) being with a freshman isn't unheard of, it seems strange that, since they've been together for two years (and this is said at the beginning of the movie, thus at the beginning of the school year), that he, presumably as a freshman, got together with a sixth grader... or if the 2-year measure is approximate, sophomore Brad got together with seventh grader Lisa. Seems odd. Maybe she just really sucks at history, but then she should have had summer school or something by now. If she is a freshman, or has flunked history class numerous times, it seems a lot more reasonable that Brad, a senior, wants to break up, whether or not they're having sex. Keep in mind, book Brad is a virgin while movie Brad claims that Lisa is good in bed.

But anyway, I'm drifting beyond the obvious topics today.

(I don't have a copy of Crowe's book, but Tasha Robinson at A.V. Club breaks down a lot of the differences between the book and the film, and she details how Linda uses her absentee fiancé "as a weapon against people she doesn't want to date or sleep with, while not letting him get in the way of people she does. Also, getting into some backstory, Linda and Stacy became friends after Linda, "a bad kid who sold and did copious amounts of drugs... ODed and her drug buddies panicked and dumped her outside at a closed mall Afterward, 'Linda set about courting the straightest girl she knew,' basically making Stacy into her friend by force of will, and remodeling her life after Stacy's more clean-cut one.")

Third thing, we don't really see the parents in this film. Stacy's mother tucks her in about 16 minutes in, then Stacy sneaks out to be with Ron and parents turn into a non-issue. And, that is not to disrespect authority or flaunt teenage rebellion but simply to tell a story that is about teenagers. Teenagers think they know everything. It doesn't matter what their parents do or say, teenagers will tend to do what they want. If their actions happen to coincide with what their parents want, that's probably just luck.

Mr. Hand ends up being the only adult who really affects the story. Mr. Vargas barely does anything, and since Stacy getting sick and running out of the morgue happens after her abortion in the movie (it happens before in the movie), the significance of her being sick is changed. Plus, Vargas has little to do with her directly... though it does make for a nice moment for Mark. In the book, there is more about Mr. Hand. He's not from Hawaii but emulates Steve McGarrett from Hawaii Five-O. What I like about Mr. Hand is how he and Spicoli actually seem friendly despite the whole knife incident when they first meet.

Robinson suggests that Spicoli is not as likable in the book, but movie Spicoli is definitely likable, even if he is rather obviously a bit of a loser who might never amount to anything. And, Mr. Hand presents himself as a hardass but--and maybe it's just the teacher in me relating a bit--he seems to actually care about his students even if is convinced they are all on dope. When he comes to Spicoli's house at the end of the film, I kind of want to see more of their interaction than the film provides. Spicoli's one bit of knowledge about US history that we hear--

What Jefferson was saying was, "Hey, we left this England place 'cause it was bogus. So if we don't get some cool rules ourselves, pronto, we'll just be bogus, too."

--is awesome. It's funny, fairly honest and, as Mr. Hand points out, "very close." 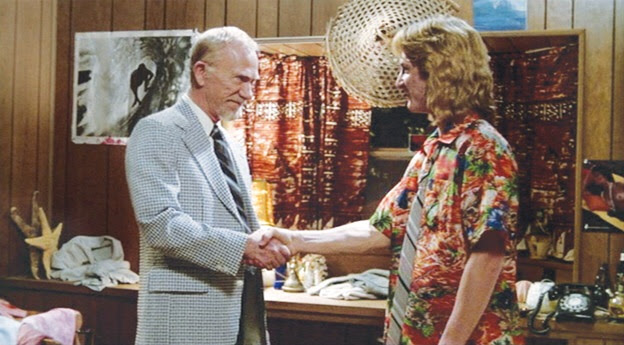 I think the key to both Spicoli and Mr. Hand is not that they are necessarily good people but they both definitely have some personality to them. I don't think I'd want to spend much time with, say, Mark, because he doesn't have much personality to him. Don't know enough about Brad's interests to know if he'd be good to spend time with. Linda--she'd be fun. Stacy--give her a few years. But Spicoli--he's already just so interesting. Maybe not in positive ways, but in high school that hardly matters, and in film, that hardly matters. The more interesting you are, the more interested we are. That's why villains get popular.